To make the next generation as excited for synthetic biology as we are, we reached out to elementary schools to teach children about science and demonstrate science. Furthermore, we wanted to inspire them about science. Therefore, we developed an interactive, short guest lesson intended for children from the age of 10 to 12. In this lesson, we aimed to teach the children about some basic chemistry and biological aspects, such as surface tension, density, and material behavior. 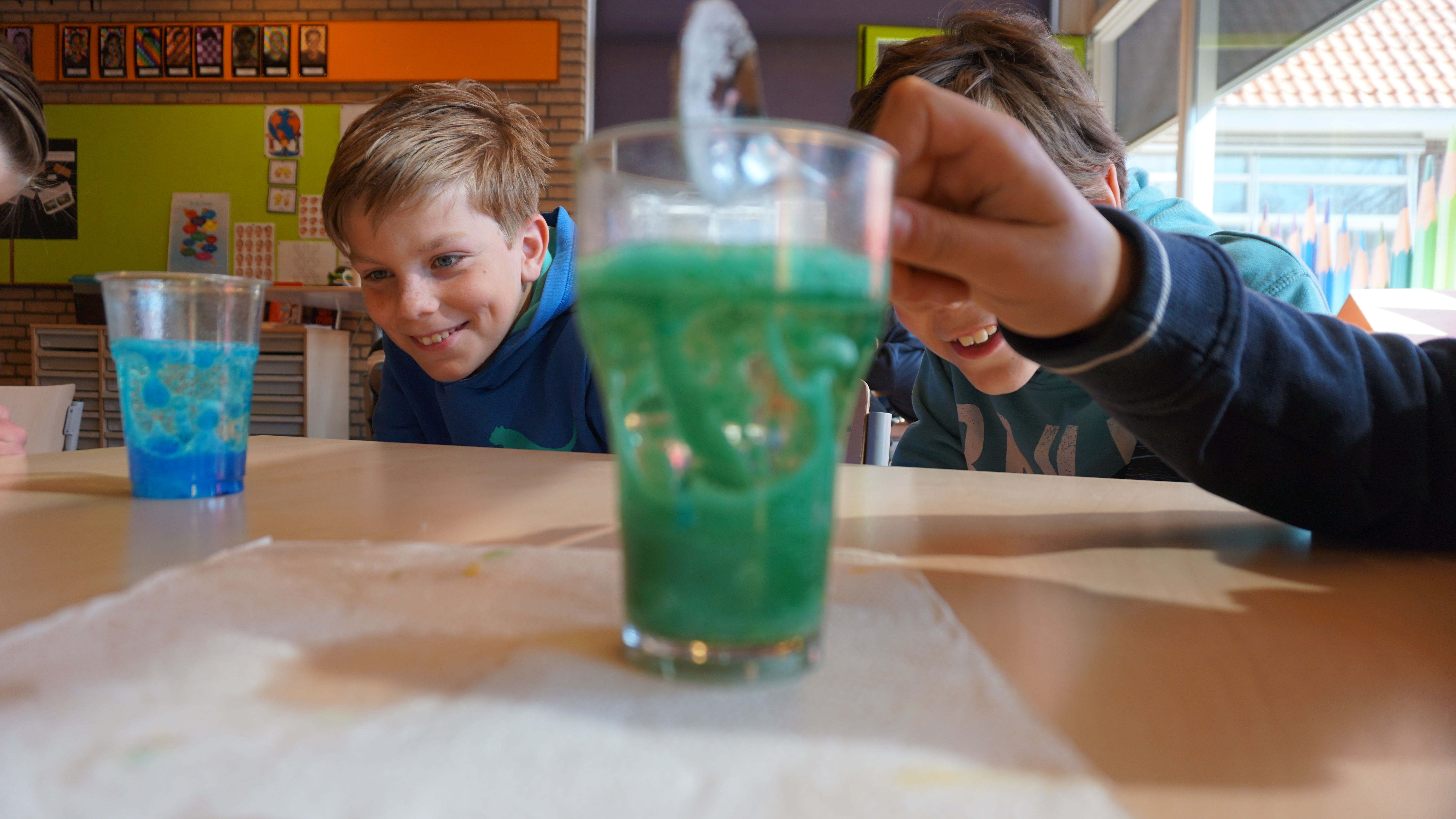 On the 9th and 16th of April, we visited two elementary schools: ‘t Mulderke in Uden and St. Trudo in Helmond. At both schools, we visited multiple classes to give a short and dynamic guest lesson. At the first school, we performed the “pepper and soap experiment”, in which the children could observe floating pepper moving away from their finger when they put soap on their finger. This was not only a fun way of teaching the children the concept of surface tension but also to remind them of how important soap is to remove bacteria and germs from their hands. The second experiment at ‘t Mulderke was the “lava lamp experiment”, in which students could create their own lava lamp with vinegar, oil, food coloring, and baking soda. The kids really enjoyed their homemade creations and also learned about the density of liquids and gasses. At St. Trudo, a different experiment was added: the “cornstarch goo”. In this experiment the children were able to experience what a suspension of water and cornstarch acts like, and that it was very fun to play around with! This experiment was used to teach the children something about material behavior and the differences between liquids and solids.

We got some great feedback from the teachers and all children really seemed to enjoy participating in these interesting experiments. We loved teaching the students new things and would like to thank elementary schools ‘t Mulderke and St. Trudo for having us!

iGEM Team Aachen also gave primary school guest lessons in Germany to teach young children about science. Because both our primary school guest lessons were such a success, we decided to expand on this by collaborating on a lesson plan that could be distributed to primary schools all over the world. Not only did we include our own experiments, but we also reached out to other iGEM teams to submit their self-created experiments. This way we created an elaborate guide, which teachers can use to teach an interactive science lesson themselves. More information about this lesson plan can be found Collaboration section Collaborations!

Special thanks to all iGEM teams that participated and sent in their exciting experiments!

We provided a case study for the course Normative Decision Theory for Engineering, within the Eindhoven University of Technology. The overall learning goal for this course was to be able to apply decision theory to concrete applications. Students should use normative decision theory to assist decision-makers in a concrete engineering decision problem, given by stakeholders. From this, students should derive conclusions regarding the relevance of normative decision theory to technology development and innovation from a User, Society, and Enterprise perspective. As team iGEM Eindhoven, we presented two case study questions. The first question was: “What is needed for implementation if we look at the social, scientific, and legislative level?”. The second question: “What are the implications for the use of genetically modified organisms within the medical field, both on diagnostics as therapeutic level?”.

There were two groups of 4 students, each working on one of the case study questions. Both teams defined these questions towards a specific target. The first group developed a strategy to determine which social (media) platform is the best to use for a specific application in communication and public relations, thereby explaining this strategy with the example for team member recruitment. The second group worked on the ethical question concerning the release of genetically modified organisms using a case study of the genetically modified malaria mosquito. Both teams published in their report the tools how to apply the specific theories used and given an understanding of why they were chosen for the specific theory. This gives us, as the iGEM team, the potential to use the theories also for other applications as the examples used by both teams.

Besides achieving the learning objectives for the students, they were asked to write their reports in such a way that the reports could be useful for the stakeholders. We are proud to say that both the groups working on our case studies gave us very nice and useful reports, and we plan to pass on those reports to the teams to come after us.

The online escape room contains six 'rooms’, each of which symbolizes a cell organelle. By solving the puzzles in the room, students obtain a code that can be used as a password to enter the next room. By solving all the rooms, the students can finally leave the cell. The escape room is designed to be solved individually or in pairs within a time frame of about 45 minutes. The rooms are designed in such a way that the students will learn about the process of transcription and translation in a fun and accessible way. In addition, the escape room will put iGEM in the spotlight, and hopefully make many Dutch students curious about the competition.

The link for this escape room was distributed amongst high school students and used in a Biology lesson by a friendly Biology teacher. In this class, the students tried to solve the escape room in groups of three and were given a prize if they managed to escape the quickest. The escape room proved to be a great success in this class! We got many positive responses from and we hope this escape room will inspire many students to continue their studies in the field of (synthetic) biology.

And if you’re curious, try to escape the cell for yourself! (only available in Dutch) 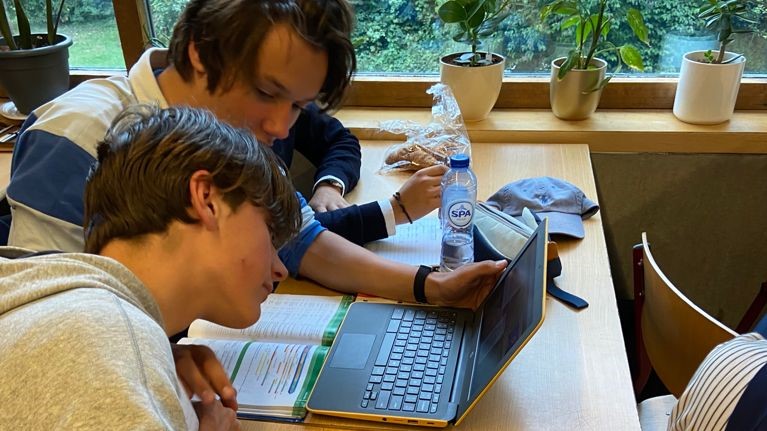 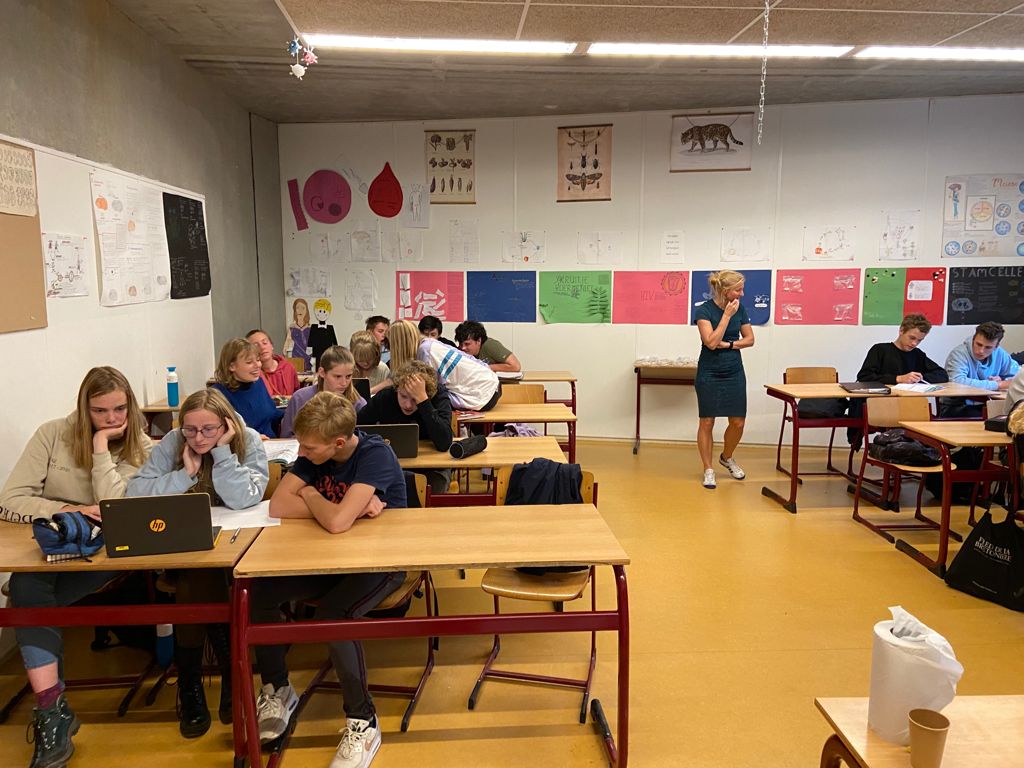 Figure 3: High school students who are trying out get out of our escape room