The design for USYD's Free coli involves transforming twenty-three genes from A. baylyi into E. coli, informed by literature searches. The genes are as follows:

Table 1.Names of the twenty-three genes from A. baylyi to be inserted into JM109 E. coli cells to induce natural transformation (NT). Genes were first acquired from Vesel and Blokesch (2021), who BLASTed NT genes from A. baumannii against the ADP1 genome. They were then identified via locus tags.

These genes will be organised into eight clusters, which will be then sequentially inserted into the E. coli chromosome using a novel recombineering strategy (described below). After each cluster insertion, the natural transformability of the new E. coli strain will be tested. This will occur until the final cluster, after which our findings and results will be analysed and presented. Our design stages can be divided into:

E. coli actually has most of the transformation and competency genes, but are largely unexpressed under lab conditions, and attempts to induce their expression have not been successful (Sinha & Redfield, 2012).

Thus, we decided that the entire natural transformation system of another phylogenetically similar bacteria could be incorporated into E. coli. We ended up deciding on Acinetobacter baylyi, not only as an evolutionarily similar species to E. coli, but one of lower pathogenicity than other relatives (Chen et al., 2008).

Thus, our method includes all 23 genes.

The next step is determining the method for inserting these genes of interest into the E. coli chromosome. There are several initial challenges, detailed below:


These two problems can be solved with the use of synthetic gene clusters. gBlocks can be ordered from TWIST, and can contain the sequences of the genes that we want to insert. This means that any gene can be clustered together with any other, and additional edits like removing restriction enzyme sites can be done before ordering them. As this particular company set a 5kb limit on the size of gene clusters to order, that was the general limit we set our clusters to be at.

We completed k-means clustering to determine the genes in each cluster, as well as their order, which is described in the modelling page. This yielded eight clusters to insert. 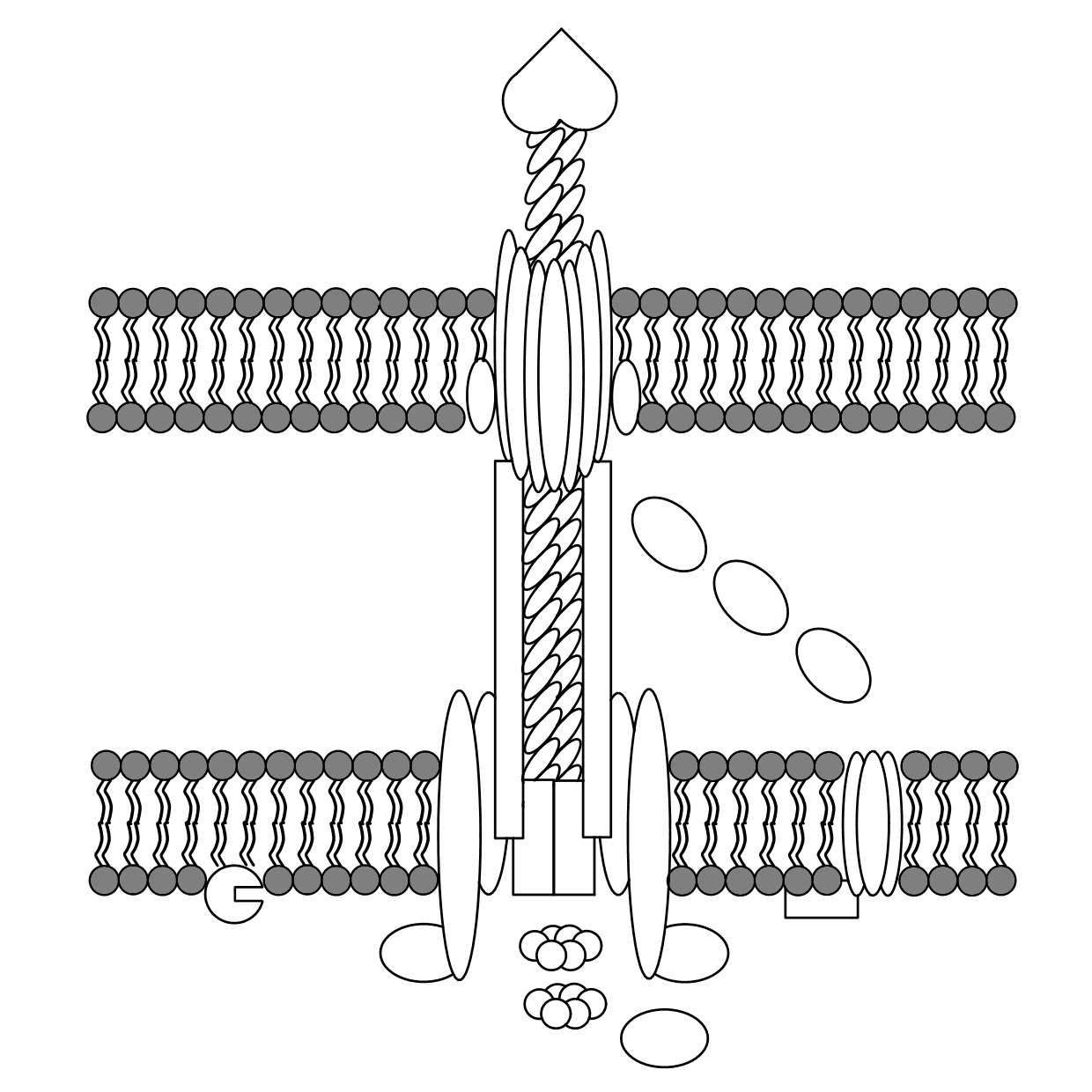 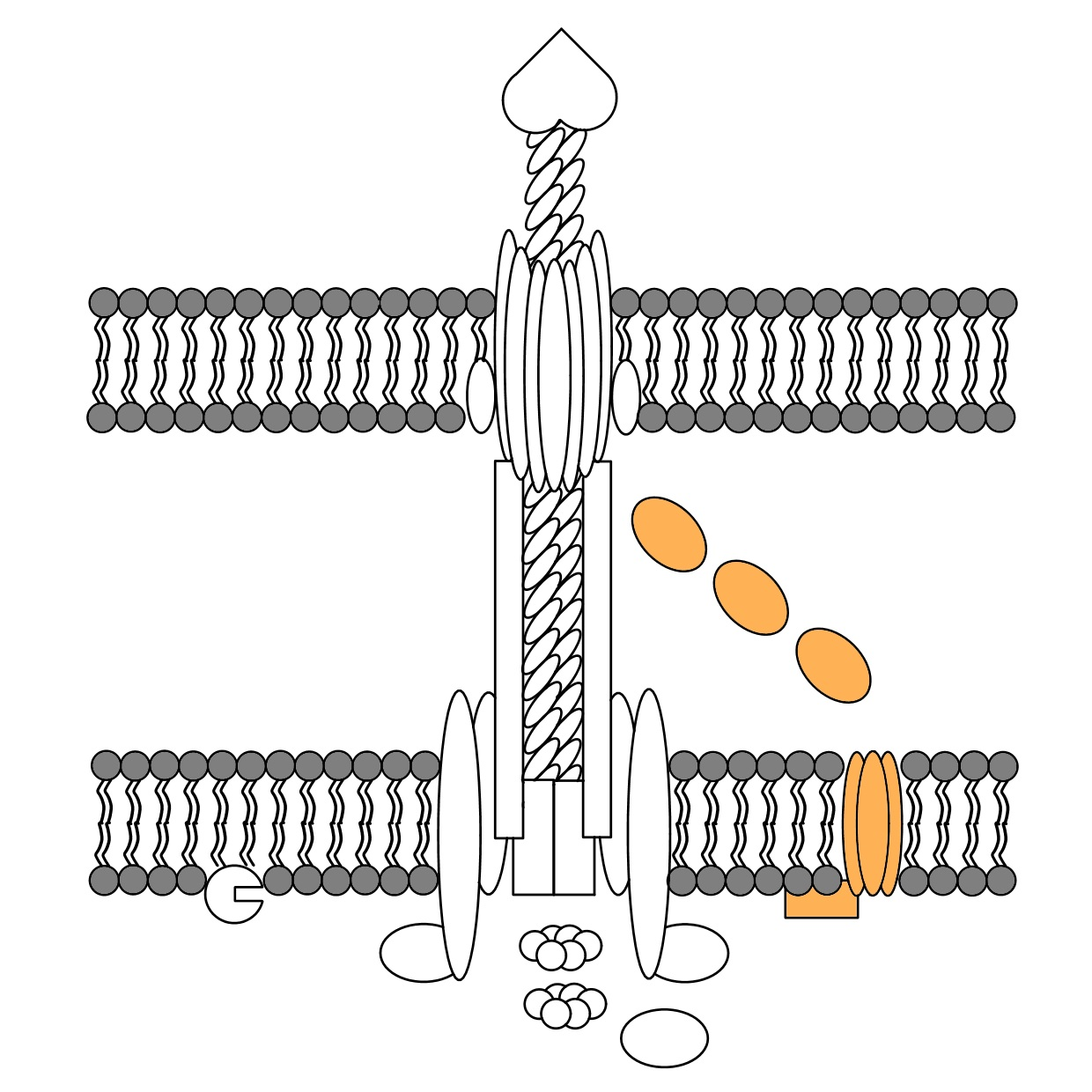 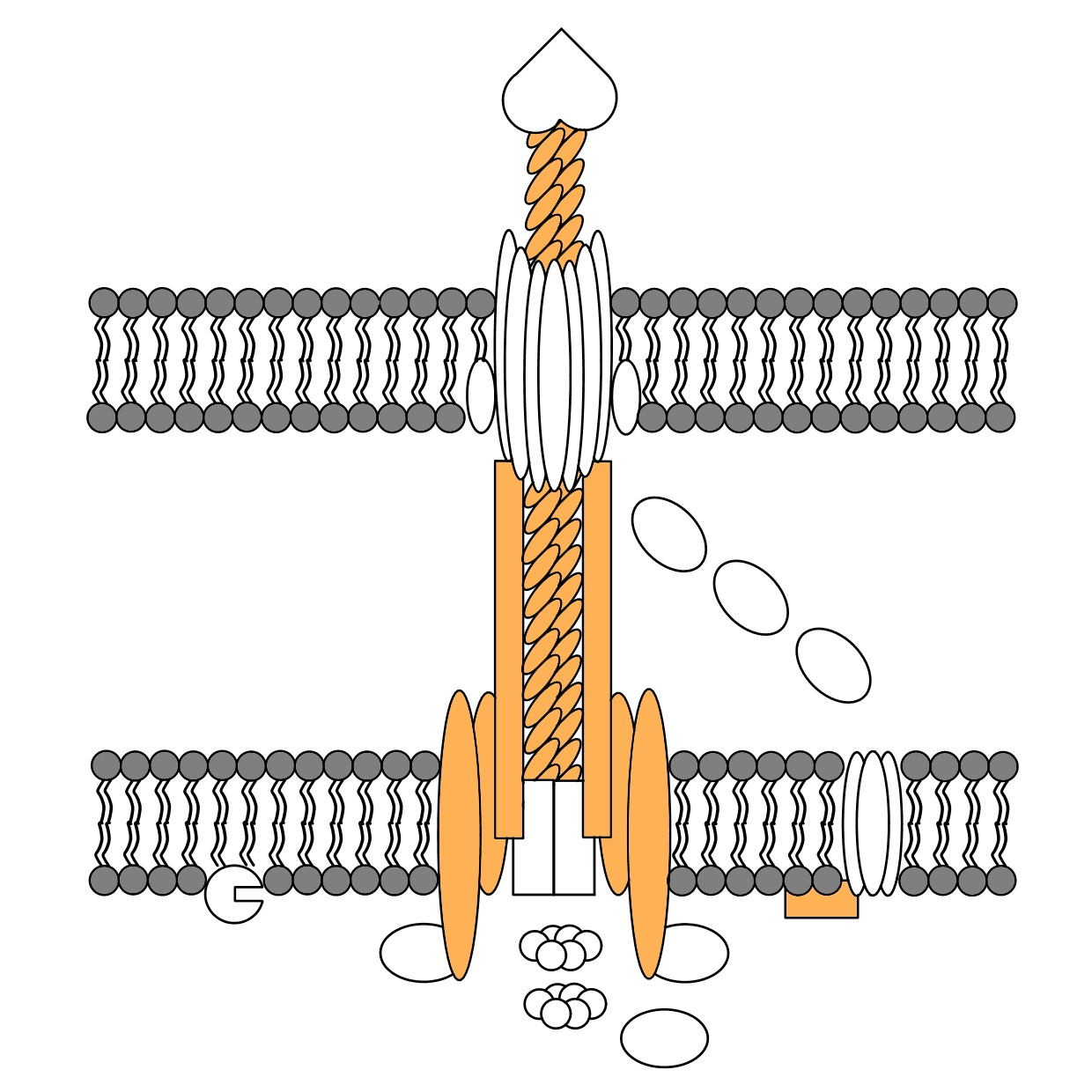 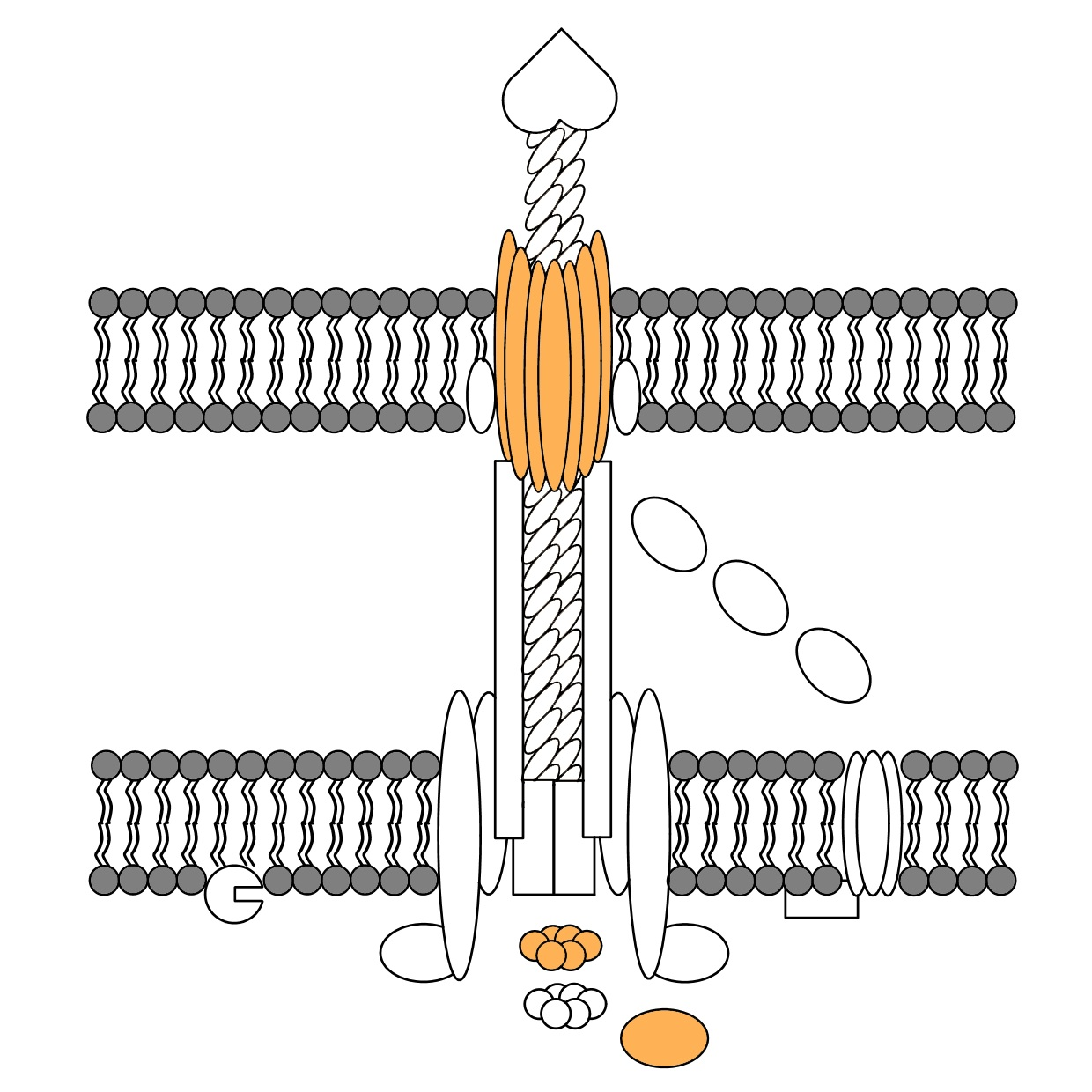 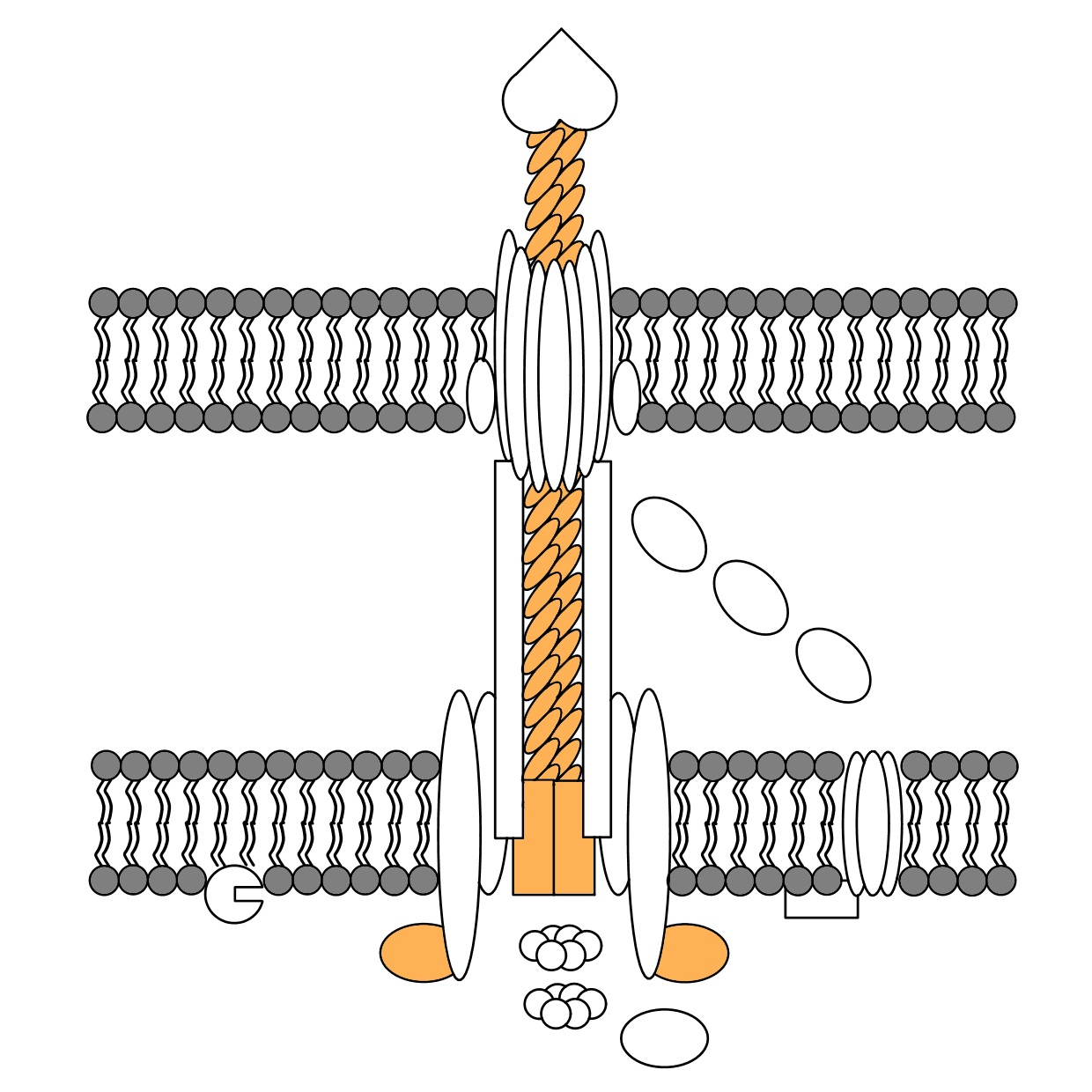 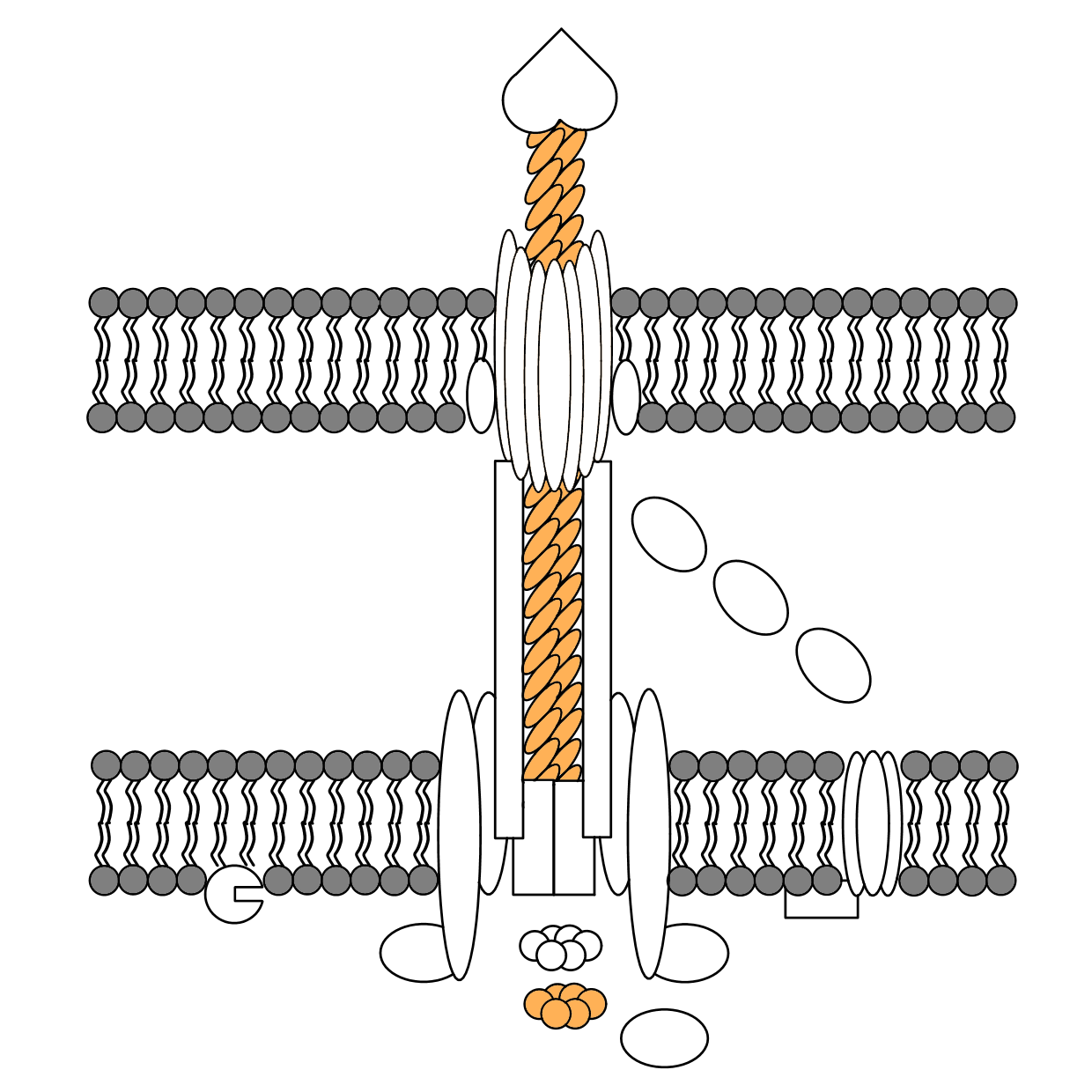 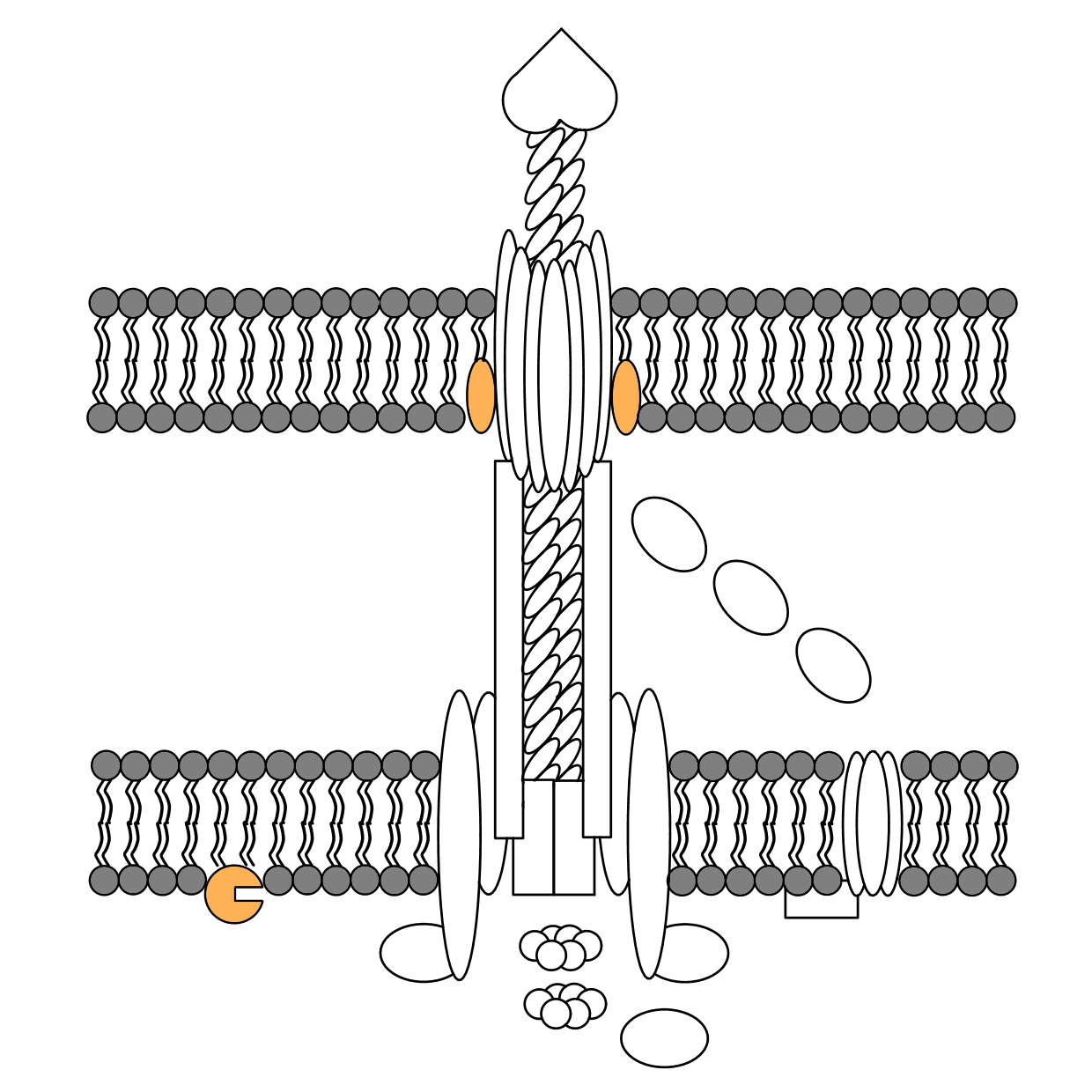 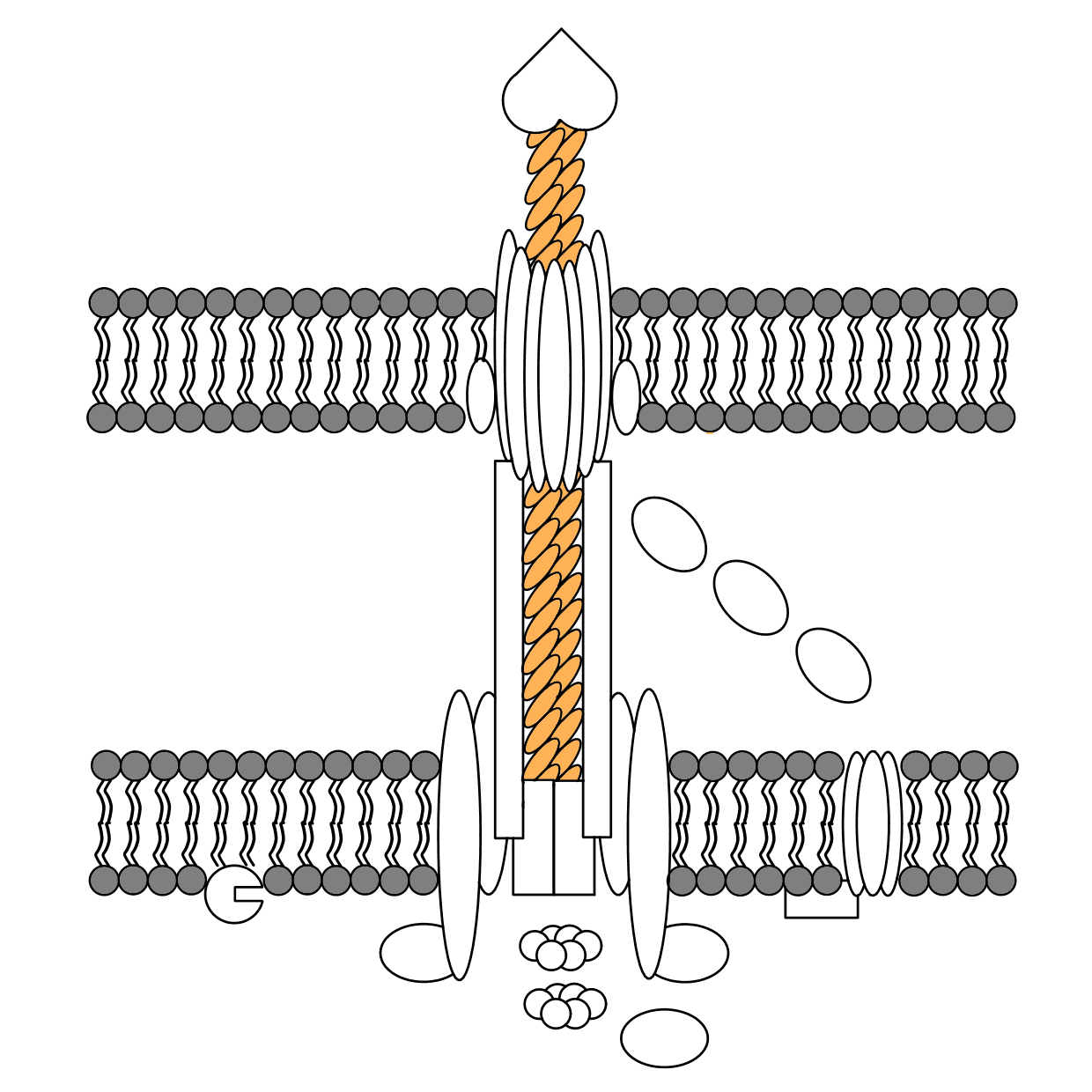 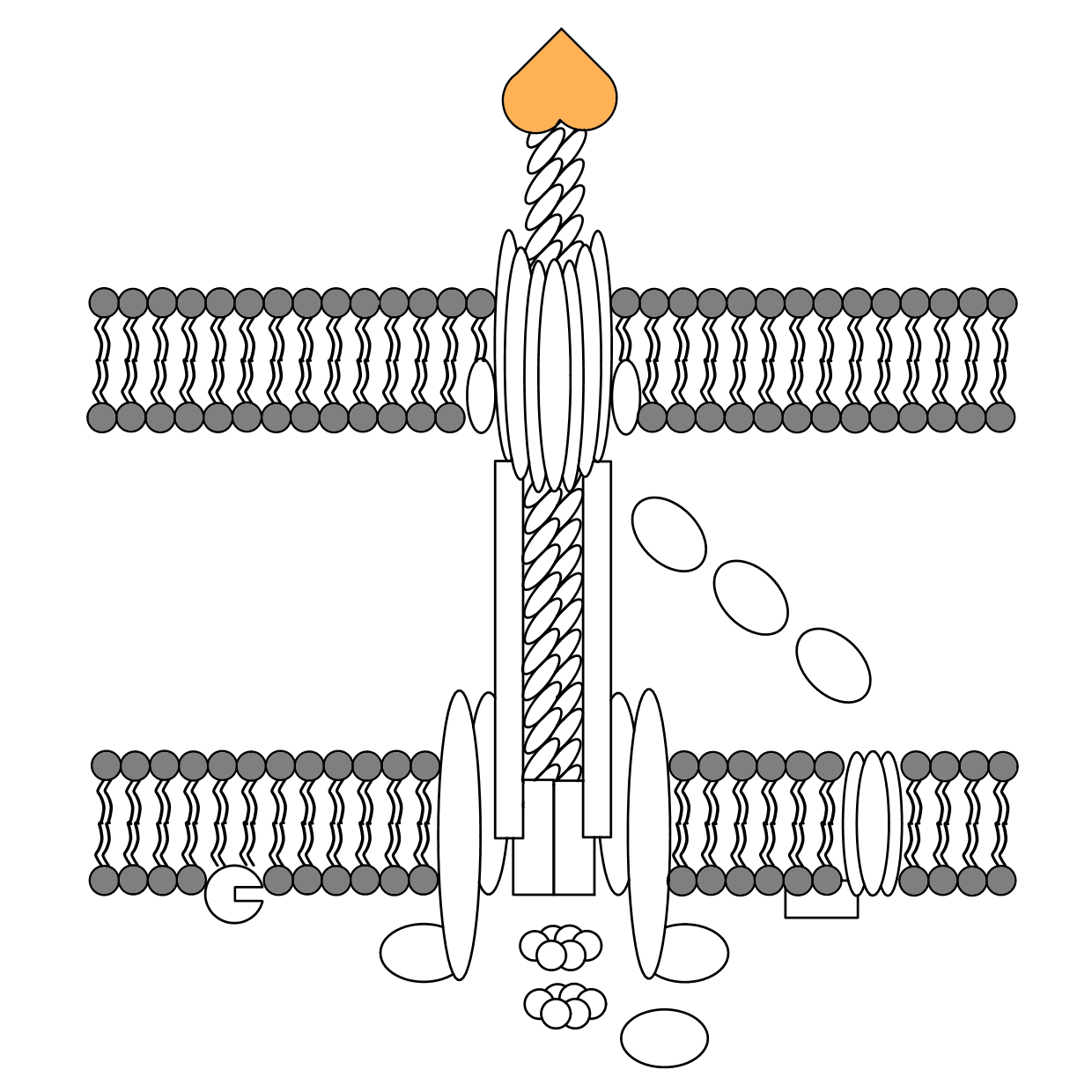 From there, we can now deal with the problem of inserting the clusters into E. coli. The following problems arise:

With these in mind, we developed a novel recombineering strategy called Babushka Blocks. Named after the Russian dolls that fit into one another, our idea involves sequentially inserting each gene cluster inside each other. This controls where they are being inserted, knocks out the antibiotic resistance marker of the previous block, and with primers, allows for clusters to be inserted in any order!

We opted for recombineering because it removes the restraints of restriction enzyme sites, and large fragments of DNA can be inserted. A study by Juhas and Ajioka (2016) has shown that up to 50kb of DNA in total could be inserted into E. coli with high efficiency and "did not have a negative effect on the growth of E. coli."

The particular recombineering strategy we have employed in our design is the bacteriophage λ Red recombineering system, and we are inserting our gene clusters into the fliK gene. 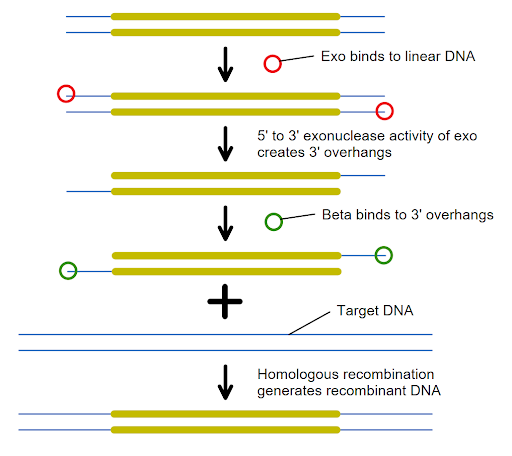 Figure 1. Recombineering system using the bacteriophage λ Red system. According to Sharan et al. (2009), the homology arms need to be only 50bp for successful recombination, Additionally, only three genes, gam, bet and exo, are involved. The gene product of gam "prevents an E. coli nuclease, RecBCD, from degrading linear DNA fragments", which allows for linear DNA to survive in vivo for recombination. The roles of exo and bet are shown above, with the gene product of bet, Beta, being an "ssDNA binding protein" and exo having "5' to 3'dsDNA exonuclease activity". This method was first described by Murphy (1998).

With that in mind, let's see the Babushka block design in action: 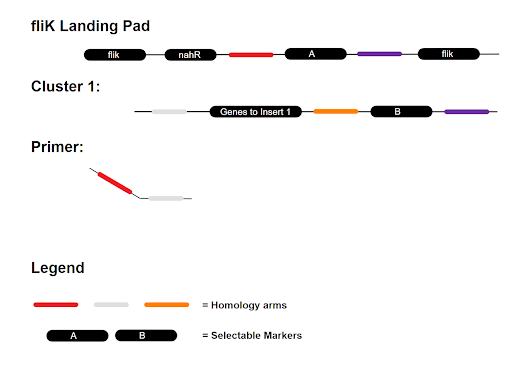 The above diagram is an initial look into the Babushka blocks.


To insert into the fliK landing pad, Cluster 1 must be first hybridised with the primer:

As we can see now, there are two matching homology arms between the landing pad and Cluster 1: the red and purple arms. As a result, Cluster 1 is able to be inserted into the landing pad, and the end result has the genes of interest inside the landing pad:

Let's see this with the next cluster:

You may be wondering at this point why the primers exist, and why we need to have the additional step of hybridising them to clusters. Imagine if the cells started dying right after Cluster 2's insertion, so we needed to skip it for now and insert Cluster 3 after Cluster 1:

As the primers all attach to the gene clusters using the same grey homology arm, any cluster can be attached to the orange primer here! With primers, clusters can be non-sequentially inserted if something went wrong, which overcomes the last hurdle of this design. So long as the selectable markers are unique, then it can always be inserted.

Thus, using the Babushka Block method, all eight clusters will be able to be inserted into the E. coli chromosome.

A key aspect of this project was the design of the promoters. We wanted to address the following concerns with our design:

A key element of the Babushka Block design is the use of primers.

As described in Sharan et al. (2009), only 50bp is needed for homologous recombination. It would be very simple to randomly generate 50bp seven times for the seven different cluster insertions (besides Cluster 1) and use them directly as primers. However, in primer form, these homology arms have a great risk of creating unwanted self-dimerisation and hairpin formations. This can reduce the ability for the primers to function optimally and hybridise with clusters.

To mitigate this, two programs were used to generate ideal primers: Primer3 (Untergasser et al., 2012) and PrimerSelect (Graham & Holland, 2005). Primer3 helped to generate an initial primer to work with, while PrimerSelect was used to determine the likelihood of self-dimer and hairpin formations, measured in kc/m. We aimed to have each primer have self-dimer scores of greater than -2kc/m and hairpin scores of 1kc/m (the higher score the better, as it is energetically less likely to form). Note that these thresholds are just a rule of thumb, but could ensure that the primers would work as effectively as possible.

The following method was employed:
1. Generate 5kb of randomised DNA at 0.45 GC content at http://www.faculty.ucr.edu/~mmaduro/random.htm
2. Insert into Primer3 (https://bioinfo.ut.ee/primer3-0.4.0/) with the following settings:

3. Find the outlined probe, and arbitrarily capture bases upstream/downstream of it to make up 50bp (the website caps it at 36bp). Avoid repetitive regions and long regions of the same base (e.g. ATATA, TTTTTTT) as that leads to worse self-dimer and hairpin scores.
4. Insert into PrimerSelect and observe initial dimerisation/hairpin scores. If they are too large (negative double digits) redo steps 1-3. The closer it is to the optimal values, the easier the following steps will be.
5. Observe the bases that are causing dimerisation/hairpin formation. From there, change one of these bases into a different one and repeat step 4 to see if it improves/worsens the values. Repeat till the values are satisfactory.

Further information on this can be found under the documentation for our basic parts but a table can be found below of primer scores:

Thus, the use of programs Primer3 and PrimerSelect has assisted us in the creation of primers that have lower chances of forming self-dimers and hairpins.

Selectable markers need to be used in each gene cluster to be able to select for colonies that have successfully incorporated them into the E. coli chromosome. As described in Cluster Insertion, the Babushka doll method requires all the clusters to have a unique antibiotic resistance marker. There are many selectable markers available, but we needed to also consider that the clusters need to mostly stay under 5kb as well.

We found that the following configuration was possible:

* the MalS gene converts starch into simpler sugars, and can be used in lieu of an antibiotic resistance gene to select for transformed colonies. If the bacteria are grown on minimal media with starch, only those expressing the MalS gene will be able to survive. To avoid Free coli having any kind of antibiotic resistance, MalS could be used as the final selectable marker. This would be possible if Cluster 8 was inserted first, then Cluster 7, but without experimental data, it is not possible to determine the viability of this as of now.

Cluster 4 and 8 both exceed the 5kb limit by a small margin, however, they would still be able to be synthesised as gBlocks if the lab component was possible.

The following describe the general practices involved when constructing the gene clusters on SnapGene® software (from Insightful Science; available at snapgene.com)