Design: The purpose of our design is to break up and prevent aggregation of misfolded alpha-synuclein (aSYN) which are toxic to neurons. We are using two different approaches to achieve this goal. In the first concept we are using a protein chaperon, HSP70, that will interact with misfolded aSYN and fold it back to its natural active conformation. In the second approach we are using an autophagy tag to selectively drive the autophagy system to the misfolded aSYN inclusions. Dissolving the aSYN aggregates or preventing their formation is expected to ameliorate the symptoms of PD and possibly stop the disease from worsening. Function of Engineered Biological System: Concept 1: refold aSYN to normal form by attaching HSP70 to a “bait” aSYN, which will be brought and incorporated into inclusions where it will fold aSYN in the inclusions into its normal form. Previous studies have shown that increasing the levels of HSP70 inside cells with aSYN inclusions decreased the number and size of the inclusions (Opazo et al., 2008; Outeiro et al., 2008). Our approach aims to specifically bring HSP70 to the inclusions and misfolded aSYN in general without a major effect on the cellular metabolism. Concept 2: bring autophagy tag to aggregates and degrade them by using the cell’s natural autophagy process to selectively remove misfolded aSYN. In PD patients, for yet unknown reasons, misfolded proteins such as aSYN escape the proteasome and autophagy degradation and recycling pathways and instead persist inside the cell forming toxic protein aggregations that eventually impair the cell's own function. Previous studies have shown that chemically boosting the autophagy pathway in cells with aSYN inclusions decreased the size and number of the inclusions (Webb et al., 2003). By actively targeting the protein inclusions formed by misfolded aSYN we aim to circumvent the “escape” strategies due to which these inclusions normally persist inside the cell. Parts Overall we are implementing the following biological parts:      Coding sequence for human wild-type alpha-synuclein      Coding sequence for PD-associated mutant A53T of human alpha-synuclein      Coding sequence for human HSP70      Coding sequence for the autophagy tag The new parts will be created in bacteria cells and then tested in mammalian cells as the target system. Bacteria cells are commonly used to manufacture plasmids for cloning and genetic engineering since they are time and cost-effective. Mammalian cells will be used to test our model since the purpose is to develop a biological treatment for PD. Due to the limitations in time and resources, we decided to conduct the preliminary test in VERO cells since they are readily available and easy to manipulate in the laboratory compared to neuronal cells. Moreover, the underlying molecular process is expected to work in any mammalian cell that can be transfected with exogenous protein-expressing genetic constructs. The different parts will be extracted from original plasmids using PCR or created by gene synthesis and then combined together in the final plasmids using Gibson assembly. The final plasmids will then be expanded in bacterial cells and finally transfected in mammalian cells for the expression of the engineered proteins. The EGFP-aSYN(A53T) mutant expressing plasmid was purchased from Addgene and used as is to simulate the formation of misfolded aSYN inclusions inside mammalian cells. The coding sequence for HSP70 and wild-type aSYN were extracted by PCR from plasmids purchased from Addgene. The coding sequence for the autophagy tag HyD-LIR(p62) was obtained as a synthetic double stranded oligonucleotide form IDT. The acceptor plasmid pP2A-mCherry-N1 was purhcased from Addgene and linearized using restriction enzymes KpnI and Age I. The final plasmids expressing HSP70-aSYN and HyD-LIT(p62)-aSYN, respectively, were assembled using Gibson assembly (Gibson et al., 2009). The literature provides evidence for the expected success of both concepts:

Testing Our testing plan: Introduce alpha-synuclein into VERO cells and under a fluorescent microscope, observe their aggregation, introduce our 2 constructs and observe if this aggregation changes. The time of observation will be determined by a preliminary experiment in which the PD-associated mutant of aSYN marked with EGFP will be observed every day for up to 10 days to record the formation of aSYN aggregates. Protein aggregation will be detected by a digital fluorescence microscope as EGFP signal and recorded as digital images over time Data Protein inclusions will disappear or not form, hard to quantify = compare with control group, number and size of aggregates will be measured in the cells between control and experimental groups. If successful, the experimental groups will have fewer, smaller, or less bright green dots indicative of aggregations (Opazo et al., 2008; Outeiro et al., 2008; Webb et al., 2003) Part:BBa_K4079007: Human Wild type version of Alpha-synuclein

Alpha-synuclein is a protein involved in the regulation of the release of neurotransmitters from the presynaptic neurons. In this project, the wild-type alpha-synuclein will be fused to either the chaperon HSP70 or an autophagy tag to drive their activity toward misfolded alpha-synuclein by direct protein-protein interactions with fibrils and Lewi’s bodies. The plasmid containing the coding sequence of A53T mutant of human alpha-synuclein was originally cloned by Furlong et al, Biochem J 2000 into a plasmid creating a fusion protein with EGFP. https://pubmed.ncbi.nlm.nih.gov/10698681/ The sequence coding for alpha-synuclein without the stop codon, as well as the linker present between eGFP and alpha-synuclein in the original plasmid will be copied by PCR in order to be inserted by Gibson assembly inside a receiving plasmid where it will be fused downstream of the sequence coding for either the chaperon HSP70 or an autophagy tag. The stop codon is removed since the sequence will also be fused to a P2A self-cleaving peptide separating the al-ha-synuclein fusion protein from the mCherry protein used to track cells transfected with the newly created plasmid.

Part:BBa_K4079008: Protein sequence coding for a hydrophobic domain (HyD) and the LC3-interacting region (LIR) or human protein SQSTM1/p62 linked to each other in the stated order.

The HyD domain was initially described by Kim et al. J Bio Chem 2014 and characterized along with different LIR domains by Lee et al. EMBO J 2017. The LIR domain of SQSTM1 allows the direct interaction of SQSTM1 with the autophagy receptor LC3. Lee et al. showed that the addition of HyD to LIR enhances the ability of the LIR to target the protein it is fused to towards degradation by the autophagy system. The sequence of HyD-LIR(p62) was copied from Lee et al. EMBO J 2017 and obtained by gene synthesis. Homology sequences were added at the extremities of the HyD-LIR(p62) coding sequence to make it compatible with Gibson assembly in order to create the HyD-LIR(p62)-alpha-synuclein fusion protein inside the receiving plasmid.

This mutant is associated with the development of Parkinson’s Disease in humans. The mutant increases the probability of alpha-synuclein misfolding into a form that is prone to aggregation inside the cell with formation of protein fibrils and eventually Lewei’s bodies. The plasmid containing the coding sequence of A53T mutant of human alpha-synuclein was originally cloned by Furlong et al. Biochem J 2000 into a plasmid creating a fusion protein with EGFP. https://pubmed.ncbi.nlm.nih.gov/10698681/ The plasmid expressing alpha-synuclein A53T mutant fused to eGFP will be used in the proof of concept experiment as it is and it does not require any further modification.

Part:BBa_K4079011:Flexible linker used to connect two different proteins for the creation of a single fusion protein.

This linker is used in order to avoid steric hindrance between the two original parts of a fusion protein and therefore allows the two different subunits to maintain their original function and activity while fused together in a single amino acid sequence. The linker was already present in the plasmid used to subclone the human wild-type alpha-synuclein and it was used to separate alpha-synuclein from eGFP in the donor plasmid as described in Furlong et al. Biochem 2000. https://pubmed.ncbi.nlm.nih.gov/10698681/ The linker was extracted from the donor plasmid by PCR along with the coding sequence for alpha-synuclein and subcloned into the receiving plasmid to generate the wanted alpha-synuclein fusion protein. The PCR primers were designed with extra homology sequences to make the PCR product suitable for Gibson assembly into the destination plasmid.

Wetlab Results Results: A53T mutants formed aggregates that were usually too large to enter the nucleus and emit a nuclear signal like the wild type. Meaning: The strong nuclear signal of the wild type indicates that normal alpha synuclein has some kind of nuclear function that requires it to enter the nucleus. The A53T mutant is unable to do this, impeding the protein’s ability to carry out nuclear functions, and preventing the cell from performing normally. 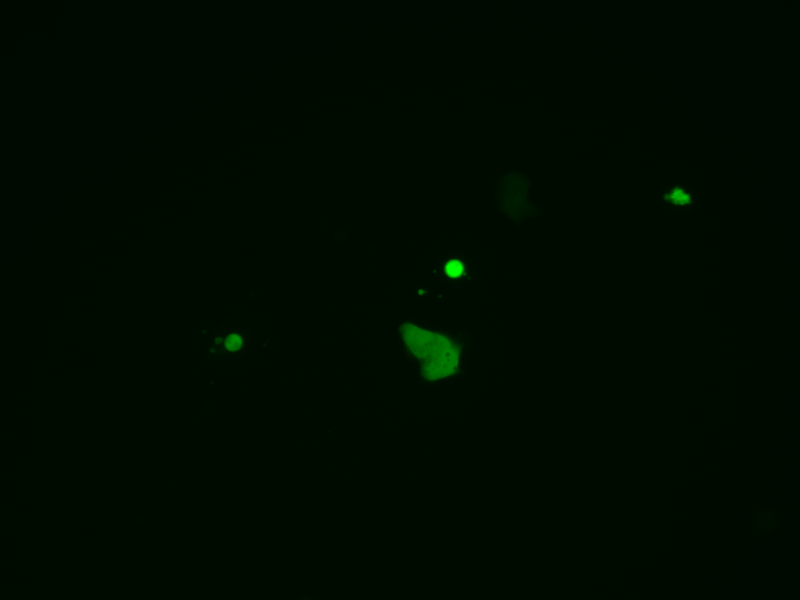 Fig. 1.1 - Image of cells transfected with wild type alpha-synuclein. The cell has a nuclear signal, which indicates that the protein has entered the nucleus. 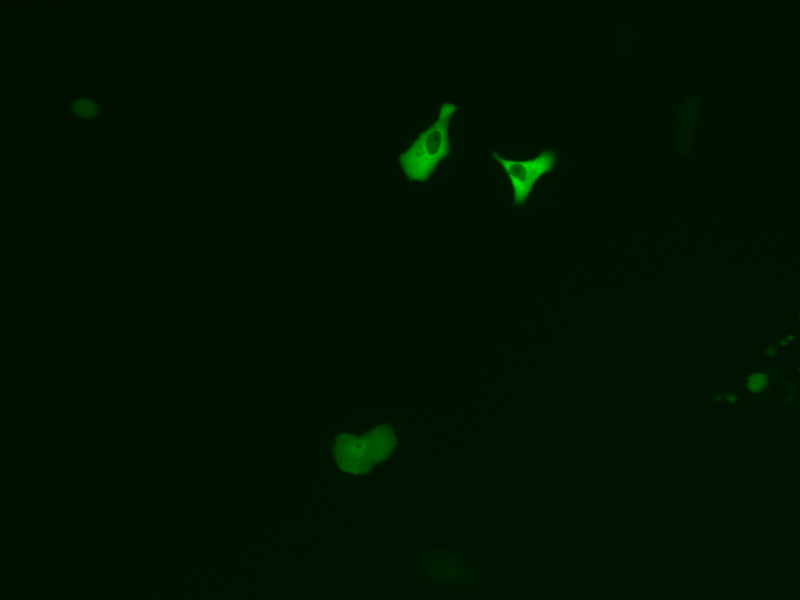 Fig. 1.2 - Image of cells transfected with A53T mutant alpha-synuclein. The two cells at the top have a weak nuclear signal, indicating that little to none of the protein has entered the nucleus. Our engineering plan can still involve using the trojan alpha-synuclein to introduce HSP70 to the A53T mutant to unfold the aggregate and return it to a normal form, while also potentially incorporating transport proteins that can attach to the unfolded alpha-synuclein and allow it to enter the nucleus. 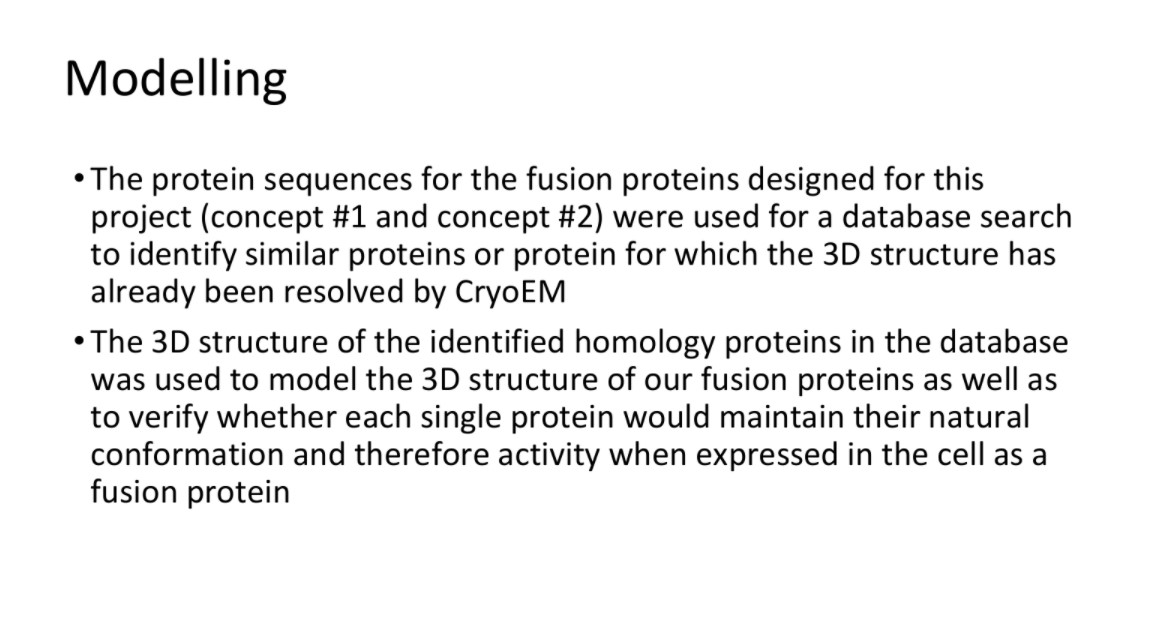 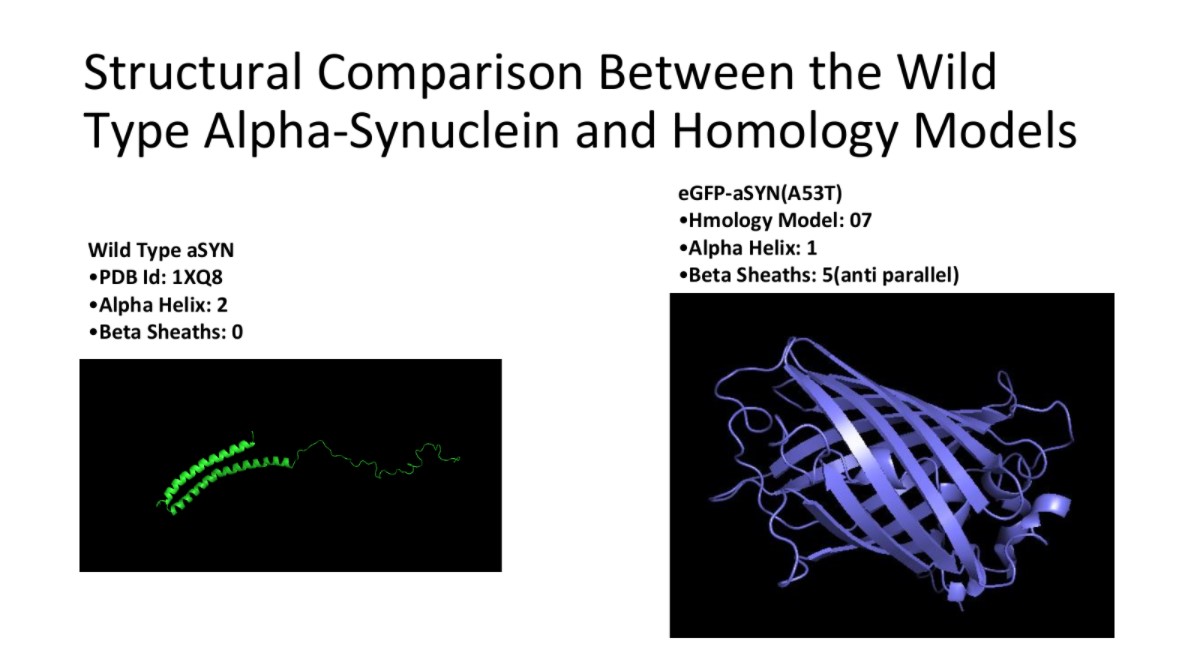 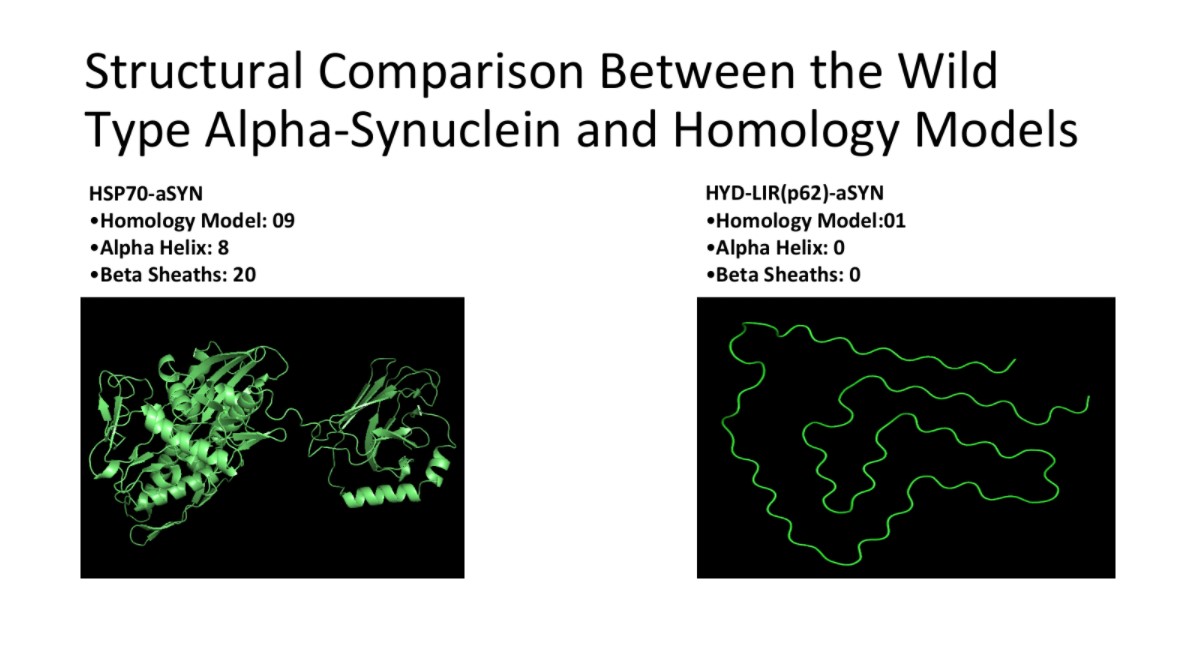 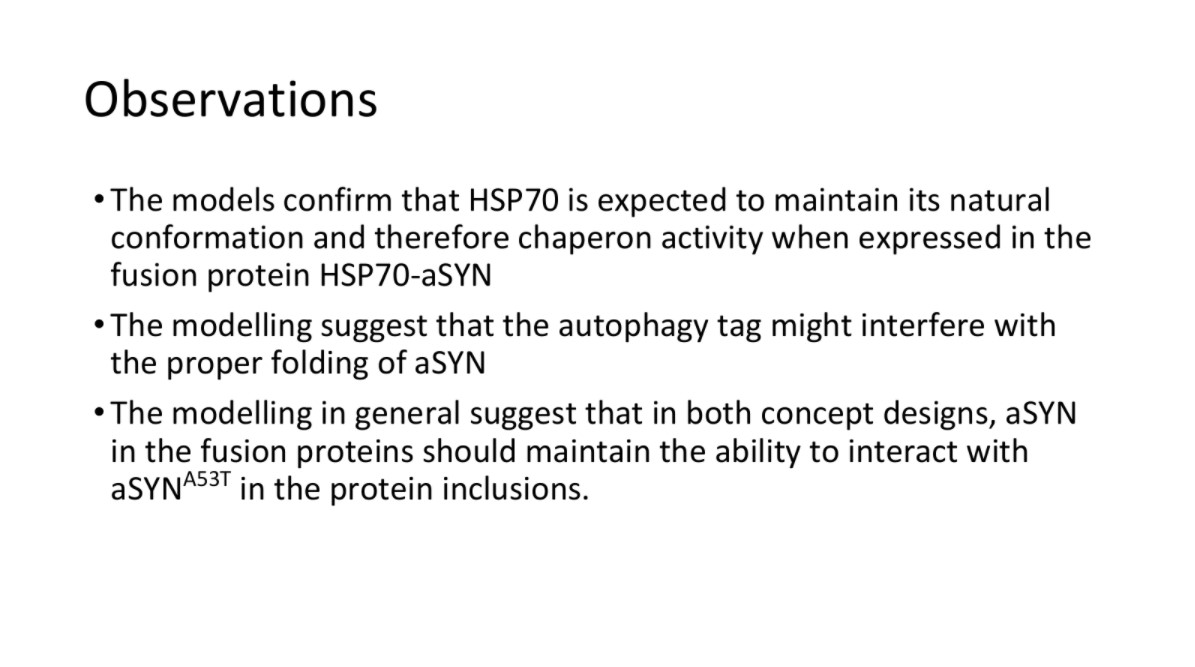 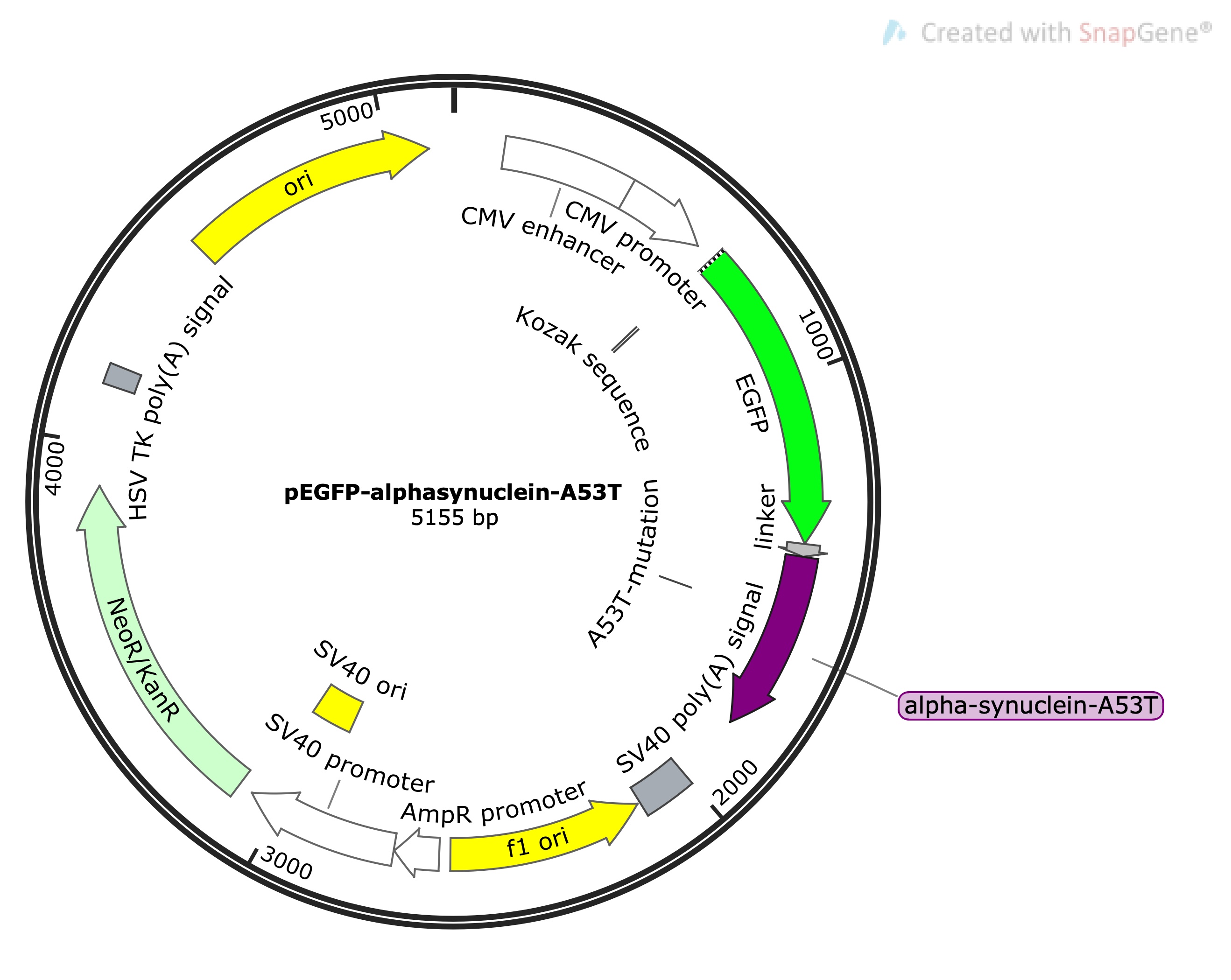 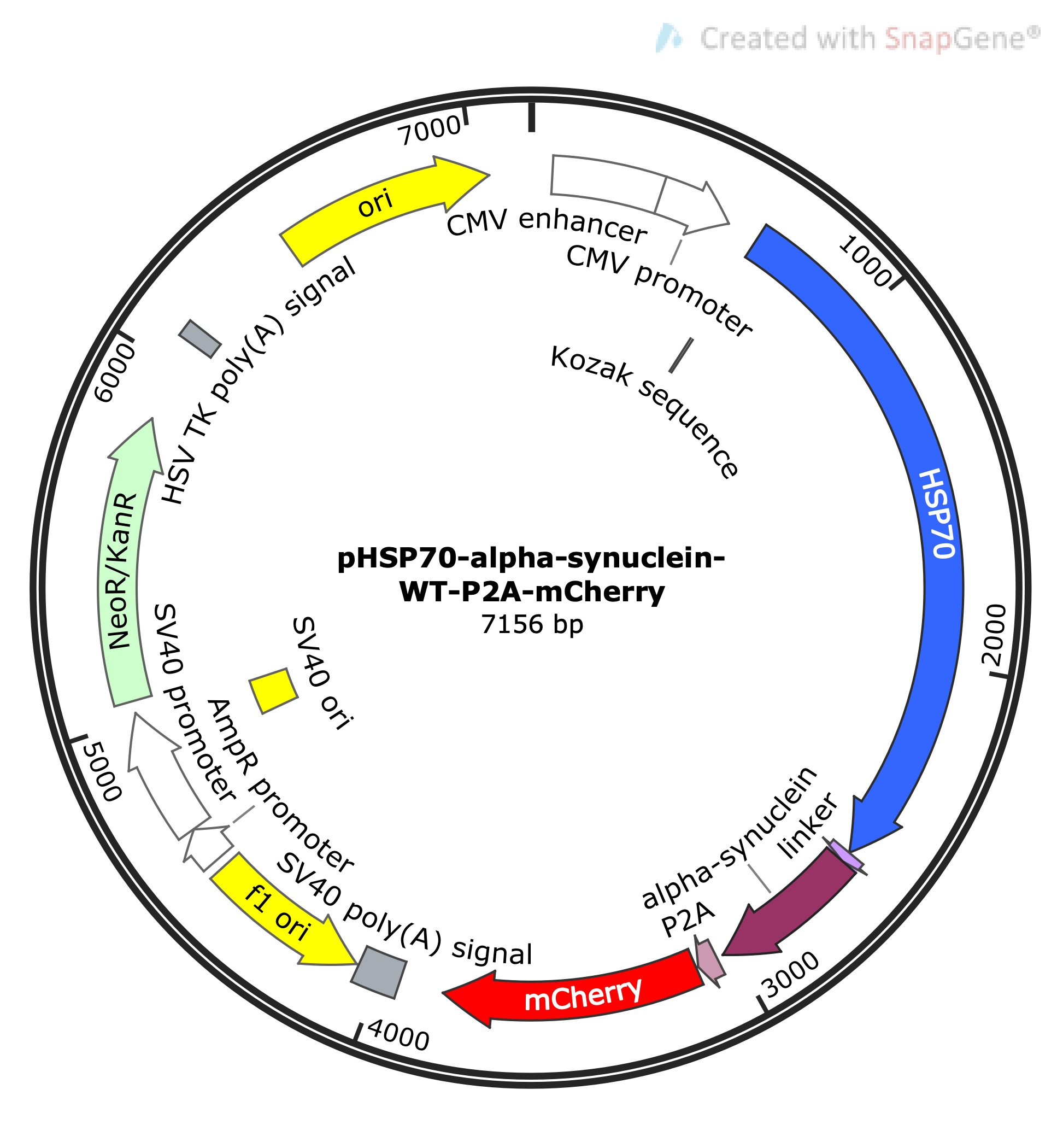 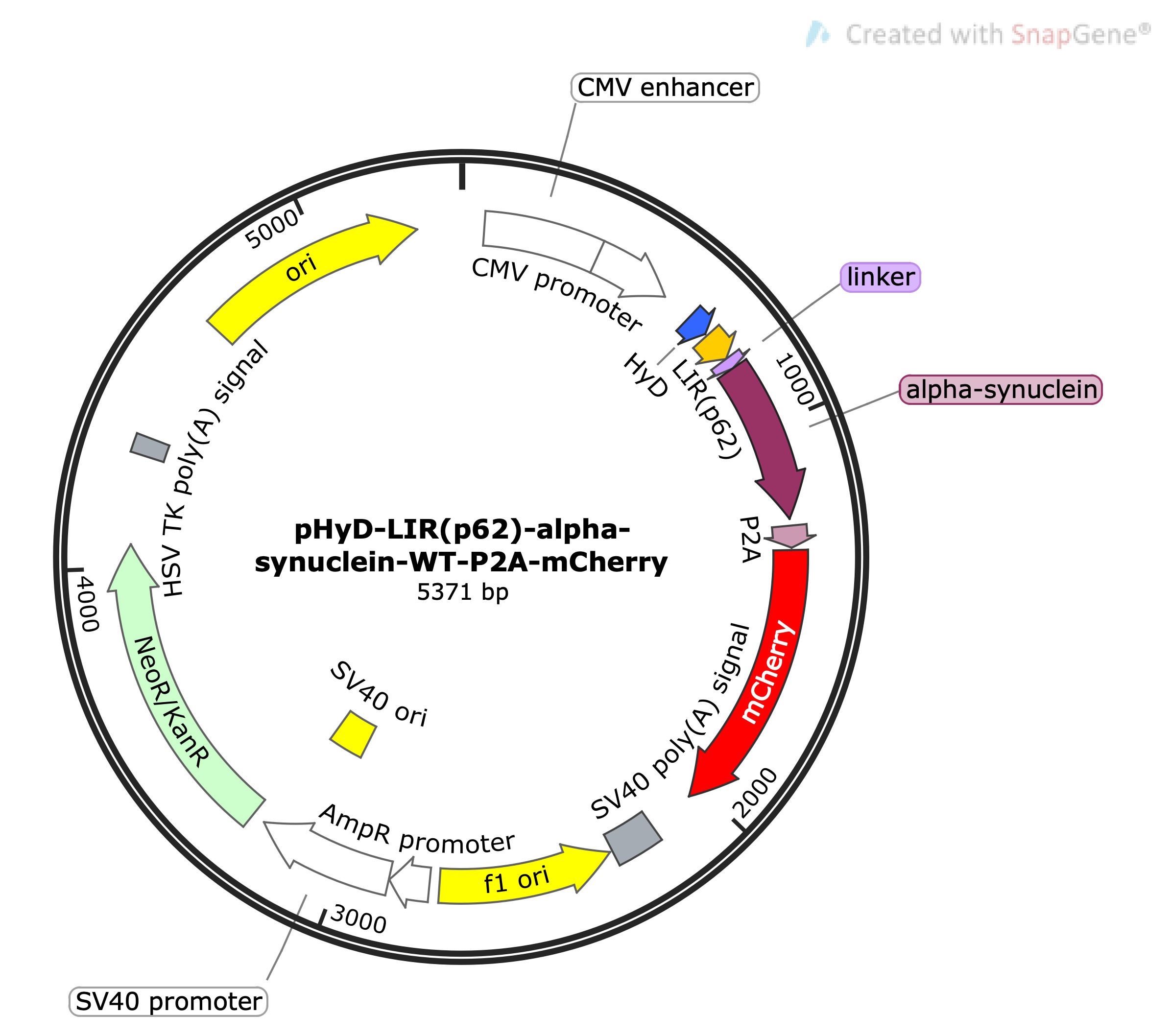