The first meeting was phenomenal. We got to hear about the Brawijaya team’s project and shared our project to their team later. Their team had the idea of developing a clean harvest of overexpressed protein systems.

Team Brawijaya is the team we had the most meetings with. We would like to express appreciation for their patience regarding the coordination and scheduling of the meetings. We reached out to them for help with the dry lab parts and part registry, and the team decided that they will help with the dry lab modeling. We were introduced to the software and programs like Benchling, NCBI, and PYMOL, that we could put in our gene sequences that would help us to the lab work sequences without actually going to the lab. These later became instrumental to our project as we did significant modelling work that helped us validate our project.

Today, we discussed where we would be able to collaborate. We were able to get advice from this team regarding how we can learn about the dry lab. The team introduced us to new programs for our dry lab experiments that would help us, and suggested a meeting with their dry lab coach. Then we were able to ask them to take our survey and distribute it to their own teams, and to tell the teams they are collaborating with to fill the survey out as well. 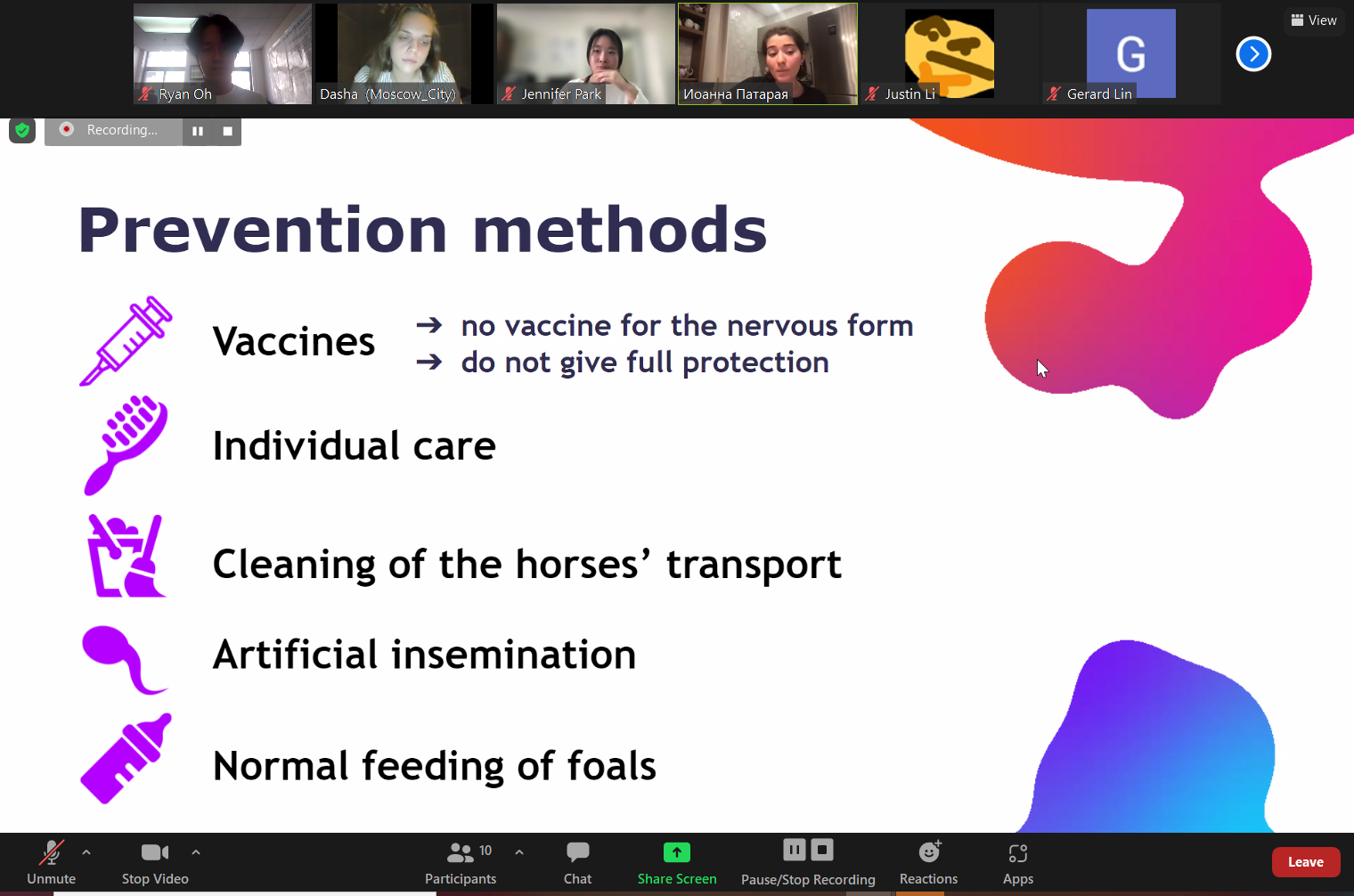 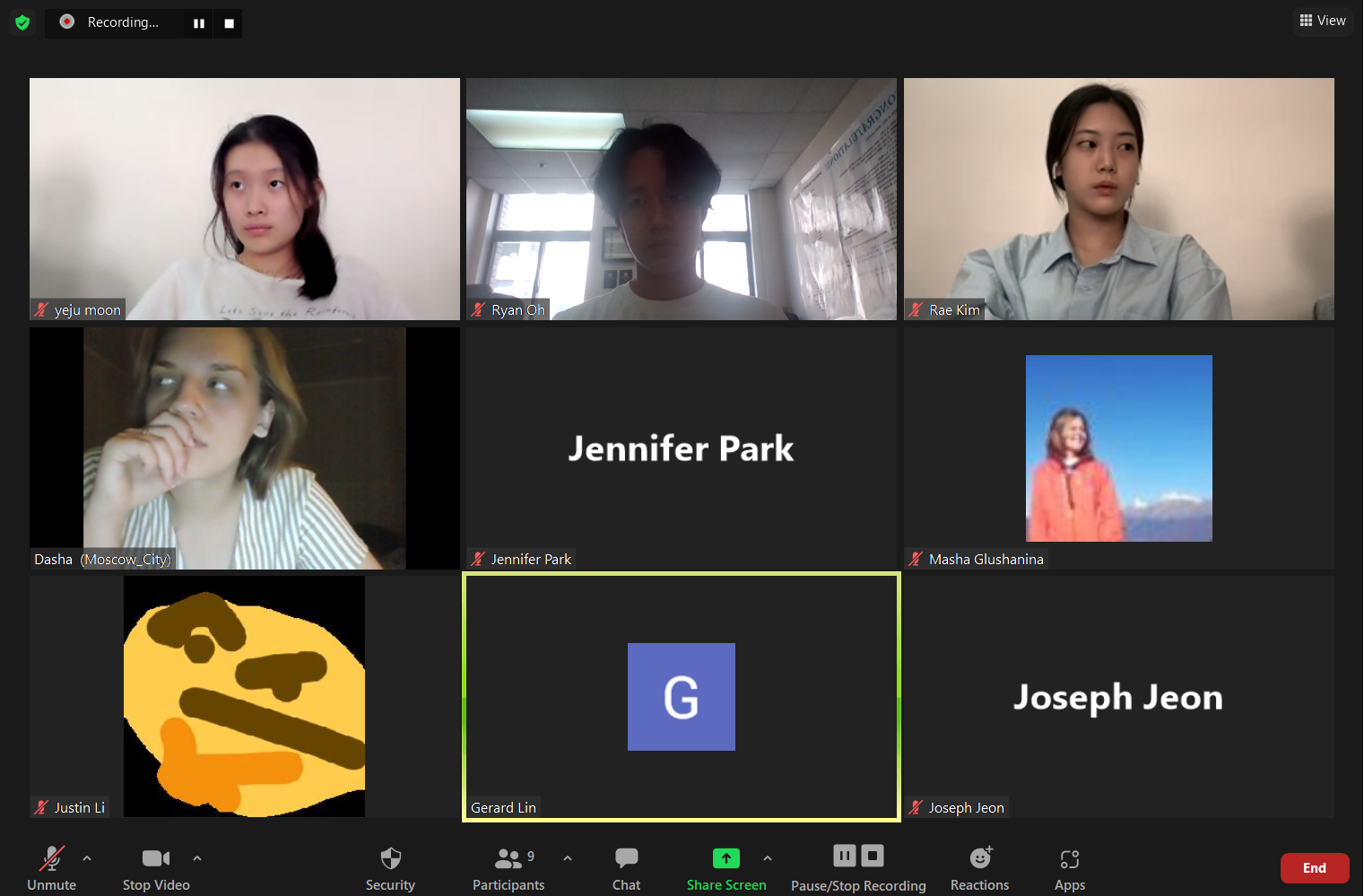 On August 24th, 2021, our team NYC_B1O met with the Moscow team through a Zoom meeting. During half of the meeting, the Moscow team explained how they are working on curing Equine Herpesvirus, improving life in places where people require horses in their daily lives. We gave them some advice on how to expand the scope of their project by explaining how their project could be extended to editing herpesviruses out of horse genomes, curing horses of herpes rather than just testing for it. In the other half of the meeting, our team prepared a presentation explaining the scope of our protein solution to Parkinson’s disease, our specific methods, and further plans for our team. 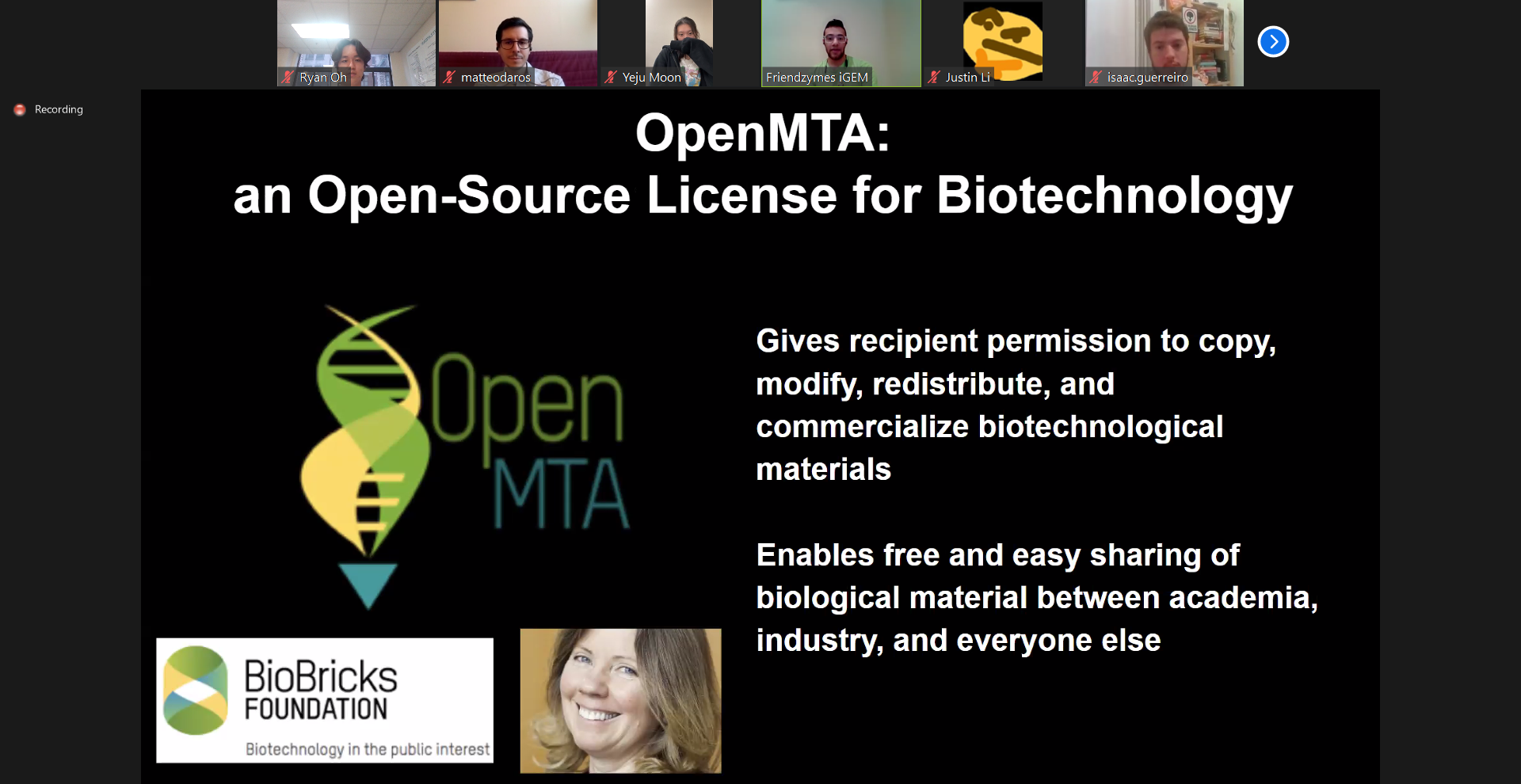 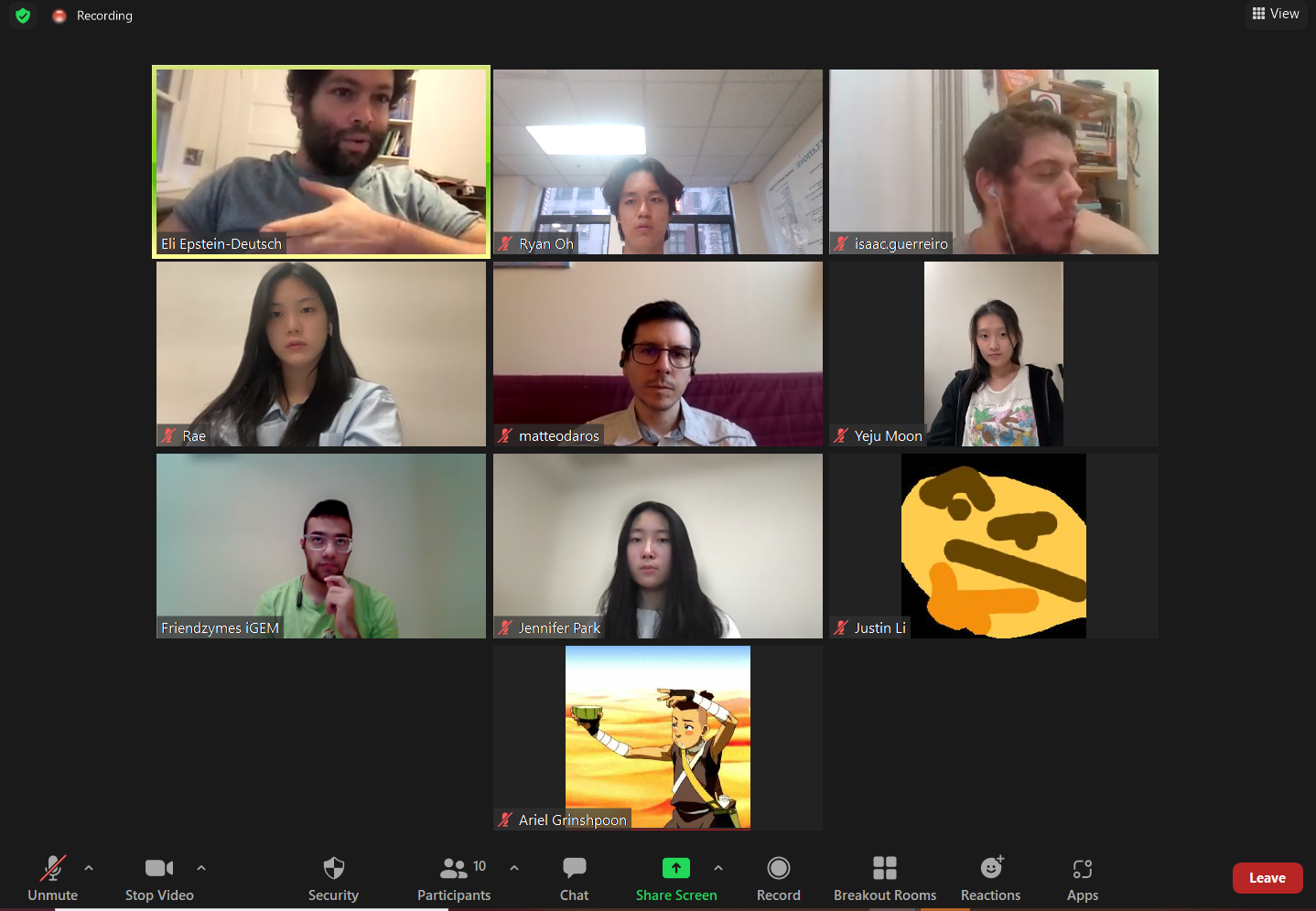 Our collaboration with team Friendzymes was highly beneficial. We met on August 25th, introduced each other to our team’s projects and discussed where we could collaborate. Friendzymes’s goal is to democratize biotechnology through the use of the Free Genes project and open enzyme collection. We are both using green fluorescent protein (GFP) in our experiments, and we discussed how we could interpret GFP levels under a fluorescent microscope. We were invited to the team’s Discord server, which was a creative way to get in touch with more teams. We were able to spread our surveys through this common medium of communication and thanks to this team, we received a lot more responses to our survey! 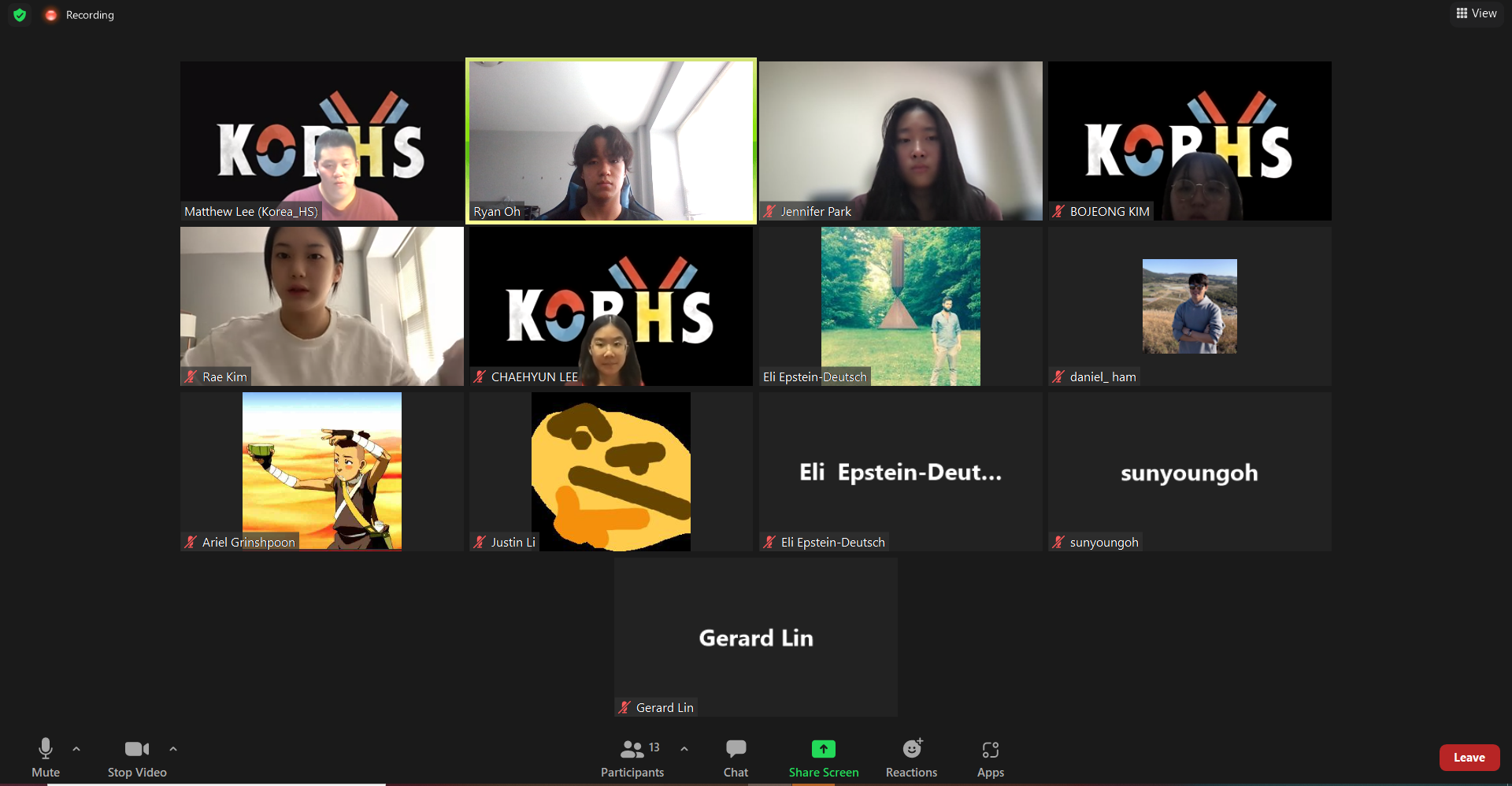 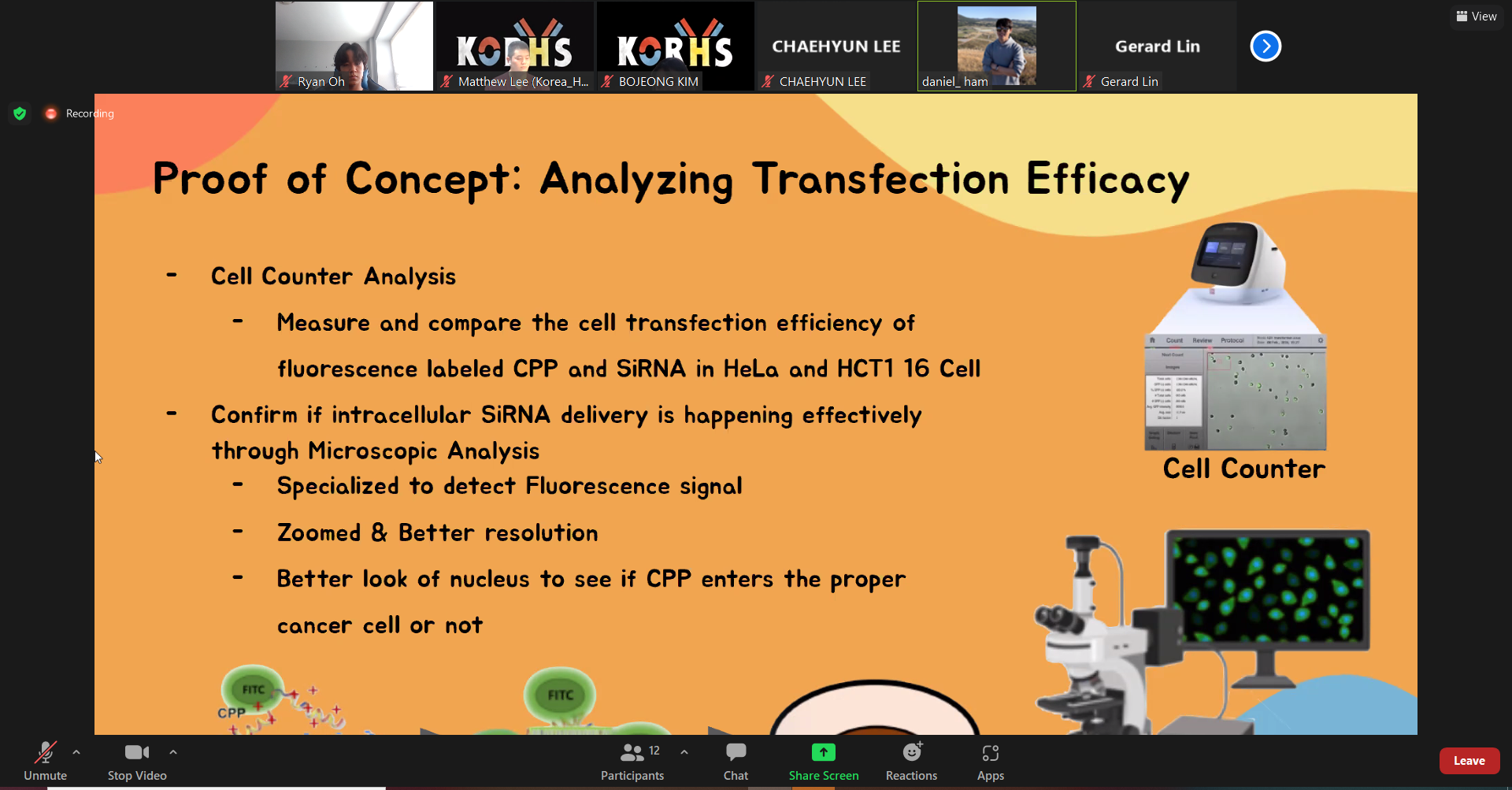 On August 25th, 2021, our team B1O collaborated with team Korea-HS. In the first meeting, we introduced our projects to each other by preparing informative and detailed presentations. In addition to explaining our presentations, B1O offered feedback to Korea-HS and vice versa. The members of the Korea-HS team shared with our team members a collaboration checklist document that offered us thorough directions to follow in future collaborations with other teams. Also, team Korea-HS provided guidance to our team regarding the dry lab parts of our project, and they will help us model our project through the software, and in return, we will co-host the meeting for their collaboration with other teams. Through co-leading, we can network with other teams better, allowing us to extend the outreach of our project.

After introducing our projects, we decided to initiate further collaboration. We discussed possible ways to help each other out. Our team asked the Korea team to take our survey and distribute it. We also agreed to distribute their survey to our networks. The Korea team not only distributed the survey, but also spread the survey to the teams they were collaborating with.The team also invited us to join the huge collaboration meeting they will be hosting, which we can have opportunity to share our projects to teams all over the world, we were able to listen to the other team’s projects. We were introduced to the new teams that we can talk to as well.

We suggested to the Korea team for us to collaborate on an educational exchange project, where we can assemble students from our respective places, and educate the students about synthetic biology which they might not have a chance to get to learn about. The Korean team sent the presentation video which enabled us to present to the younger people in NY, and we were able to introduce them to a new oncologist we had a connection with.

Many of the teams we collaborated with distributed our survey about Parkinson’s awareness to their networks. The results from the survey are posted below. We also filled out numerous other teams surveys.

1. Do you know about Parkinson's Disease? 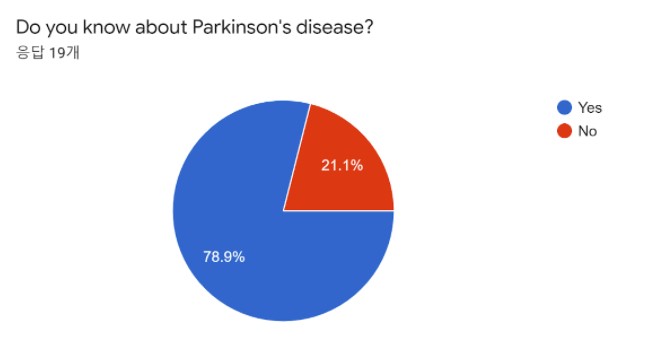 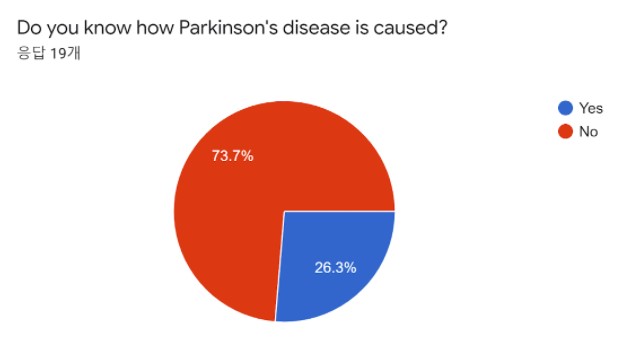 4. Do you know how Parkinson's disease is treated and how effective the treatments are?

5. Do you know the symptoms that the disease causes? 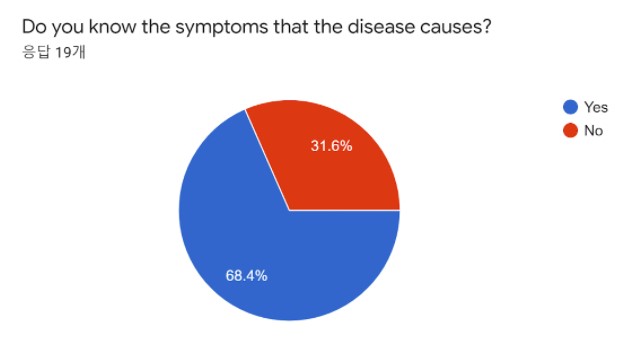 6. If there is a way to cure this disease, what do you think it will be? (4) - I don’t know (1) - by people (2) - chemotherapy / medicine treatement (1) - medication, nutrition, and exercise (1) - effective treatment to the central nervous system (electrical shock/impairment) medication that stimulates specific activity (2) - pills or a brain surgery (1) - medicines or rehabilitation treatment for muscle function (2) - vaccine (1) - Inject drugs that stimulate dopamine (1) - Further testing and time (1) - I heard that there is no way to cure this disease 100%. But there are some ways that could help some symptoms such as using medication or surgical treatments to destroy some cells (1) - Increasing dopamine levels (1) - reconstructing the damaged neurons 7. There are 5 big steps in how Parkinson's disease progresses. Do you know how this disease progresses?

8. People believe that if one has Parkinson’s disease, they won’t live long. Why is the reasoning behind that? (10) - I don't know (1) - As actions and specific functioning of the body are decreased, the stability of functioning would also be affected. (1) - Because every muscle becomes stiff gradually. (1) - Because their motor skills deteriorate and there are various complications such as Alzheimer’s disease that accompanies Parkinson. (1) - Because there is not much known about the disease (1) - Because it is known for limiting the facilitation of movement? (1) - People with Parkinson’s Disease easily have a risk of infection or heart failure, and it leads those with Parkinson’s Disease to live shorter. (1) Some famous people died of Parkinson’s disease. (1) - muscles and other system is getting worse and it is not used in its original function (1) - because they cannot walk