Understanding How SynBio Can Be Used

We wanted to understand the different ways SynBio could be implemented in different projects before we were too deep into our project. After meeting with Kent Redford earlier in the year, we were able to keep an open mind as to how to apply our SynBio to our project and gain a better understanding of how synbio could be used. We reached out to Mr. Redford since he has experience in synbio and has given talks about it. Through our meeting with him, we were able to learn how one problem could be approached with multiple synbio solutions, and that not one solution is better than the others. Through this experience, we were able to see how individual experiences can contribute to creating a synbio solution. He also told us that over the years he has seen more people who support synbio and its practices. With his help, Lubbock_TTU came to realize that more and more people have begun to accept synbio, and this contributes to the increasingly creative ways to apply it to local problems

Pivoting From Bioaugmentation To Biosensor

We originally set out to mitigate the effects of Bd with a bioaugmentation project; however, after our meetings with Dr. Rodriguez and Dr. Basanta, we realized there was a higher need for an affordable diagnostic test. They shed a light on the need for an affordable method of detecting chytridiomycosis. For instance, Dr. Basanta told us that she can not run the diagnostic test (qPCR) whenever she wants as the testing protocol is too expensive. She has to wait on others in her area that also need to use the qPCR so that they can all run their experiments at the same time. This causes a delay in her research which limits the amount of work she can accomplish. Dr. Rodriguez showed us the other side of things. He showed us the technology that he gets to use in the field. Each piece of equipment also comes with their own set of reagents, all of these things add up. He told us that getting the starting equipment is only the beginning, maintaining the consumables is an entirely different matter.

After these meetings the team started thinking if it was worth switching from a bioaugmentation project to a bioaugmentation project. One of the biggest flaws in our bioaugmentation design was that the anti-Bd agent was not specific to Bd. For example, Pseudomonas fluorescens is an antibiotic agent that works against all microbes. Whether these are beneficial to the amphibian or not, Pseudomonas fluorescens degrades all of them. This in turn would cause the amphibian to have a microbiome that is weakened. So while it does help mitigate the effects of chytridiomycosis, it leaves the amphibian more susceptible to other illnesses. To circumvent this issue, we wanted to couple our anti-Bd circuit with a Bd sensing circuit. This factor helped us decide we need to focus on a biosensor project because Dr. Rodriguez and Dr. Basanta expressed a high need for a biosensor that could be used, and with the limited amount of resources we had, we wanted to raise the quality of our work.


Determining The Standard Level of Chitin Found On Frogs

When we met with Dr. Rodriguez again, he mentioned that the sporangia phase in the Bd life cycle would be when it is most susceptible to treatment. This spurred us into looking into reasons why that would be. We began looking into sporangia, the components of it, how long it stays in the sporangia phase. Where it is in the amphibian body, and what phase of infection the zoosporangium forms. We found out that when the sporangia forms, then the amphibians are considered infected with chytridiomycosis [1]. We also found out that the sporangia forms a chitinous cell wall [1], and it remains in the skin even after the discharge papilla has been formed. From this meeting, paired with our knowledge of the V. Cholerae chitin-detecting system [2], we determined our biomarker.

We wanted to factor in the environmental chitin, therefore we looked into methods we could use to detect this.

We wanted something that could detect the chitin level for each frog since we knew that the chitin levels would be different. Since chitin can be found from the exoskeleton of insects and some fungal cell walls we wanted something that could account for the each amphibian that was swabbed. Each amphibian may have different chitin levels just from their daily life, but unless there is something to compare it to, a heightened level of chitin may be mistaken as a frog being infected.

The approach we are taking to detect chytridiomycosis is to swab for the sporangia. We wanted to detect sporangia because if sporangia is found on the frog, then it is confirmed to be infected with chytridiomycosis. By detecting something that confirms chytridiomycosis, it alleviates the probability that an uninfected frog will be treated for the fungal outbreak. This saves both time and money that researchers would have allotted for that amphibian. Since the standard swabbing protocol calls for detecting zoospores and not zoosporangia, we developed our own swabbing protocol!

We then met with Dr. David Rodriguez, and with his experience as a field ecologist, revised our swabbing protocols to make it more practical. We first thought there might be an area on the frog where the spread of chytridiomycosis would be lower than the rest of the frog. Since some areas on the frog (their feet in particular) [3] are known to have a high chance for zoospores, we thought there might be a chance there would be an area with a lower chance. However, he did not know if this would be true for all frogs. We then asked if equating the environmental chitin (found in the water and soil) to the standard level of chitin found on the frogs would be viable, but he said that was a heavy assumption.

After meeting with Dr. San Francisco, we then met with Dr. Matthew Barnes with a revised plan. Sadly, he informed us that he also did not know of an area on the frog that we could use to determine the environmental/standard chitin concentration. But, he introduced us to his graduate students and invited us to watch how they swab frogs to help us determine the environmental chitin amount.

Then we met with Dr. Rodriguez again and we presented three more ideas on how to obtain the environmental standard of chitin. This included using the effects of infection from Bd to identify areas where the infection has spread and swabbing the areas where we assume it hasn’t, using two different types of swabs, and finally looking for the thinnest layer of skin where we believe chytrid is unlikely to survive. The conclusion of this meeting was that swabbing the top of the head should be a viable location to determine environmental chitin. This is due to the behavior of frogs and the nature of how the infection spreads. Since frogs sit on their hindquarters, their lower body is typically more moist than the other parts of the body. This moistness increases infection, whereas the top of the head is typically exposed to the sun and is therefore less likely to carry a chitin load from infection. When we presented this to Dr. Barnes and his graduate students, they also agreed that this was a sound argument to make. 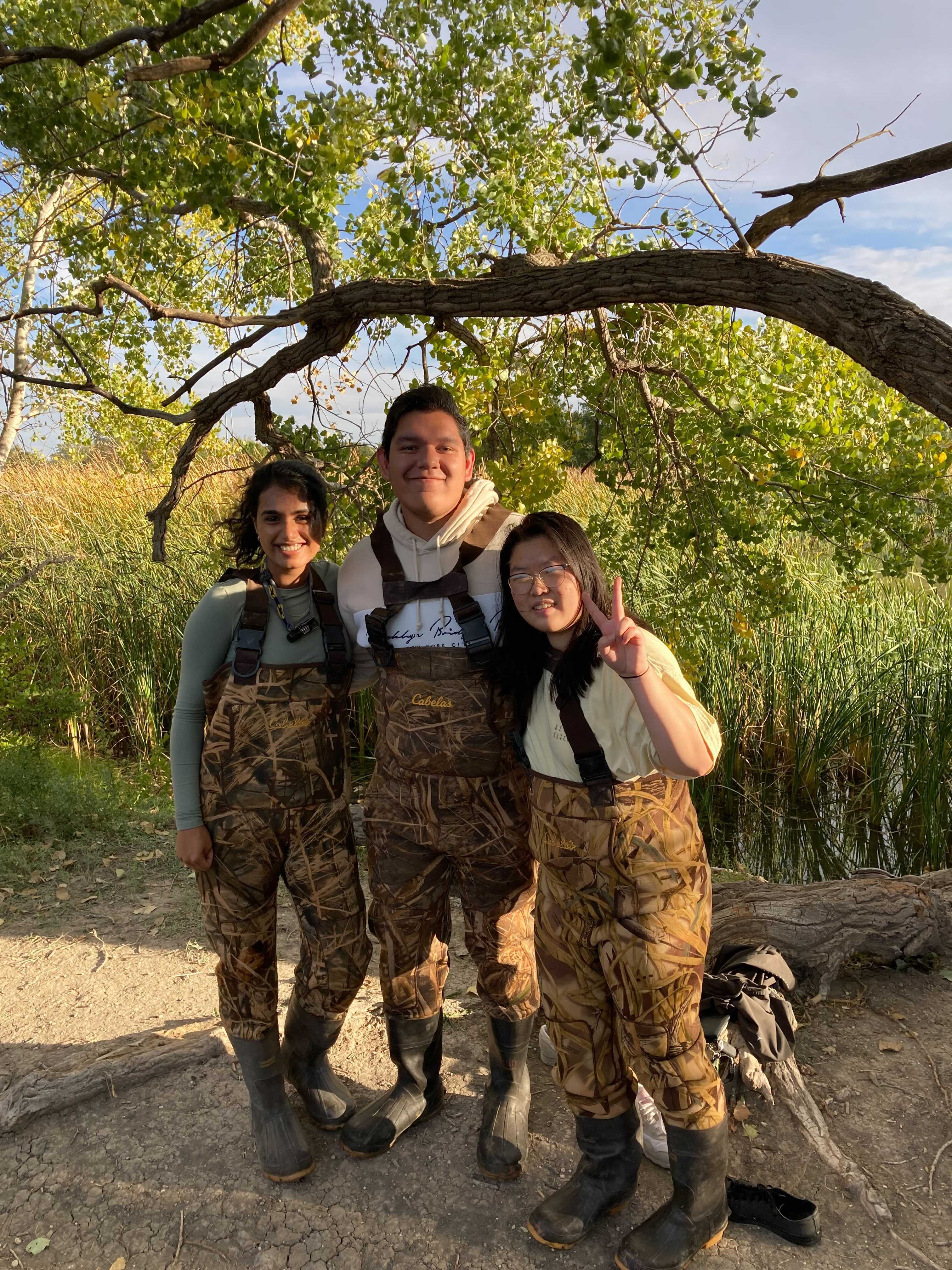 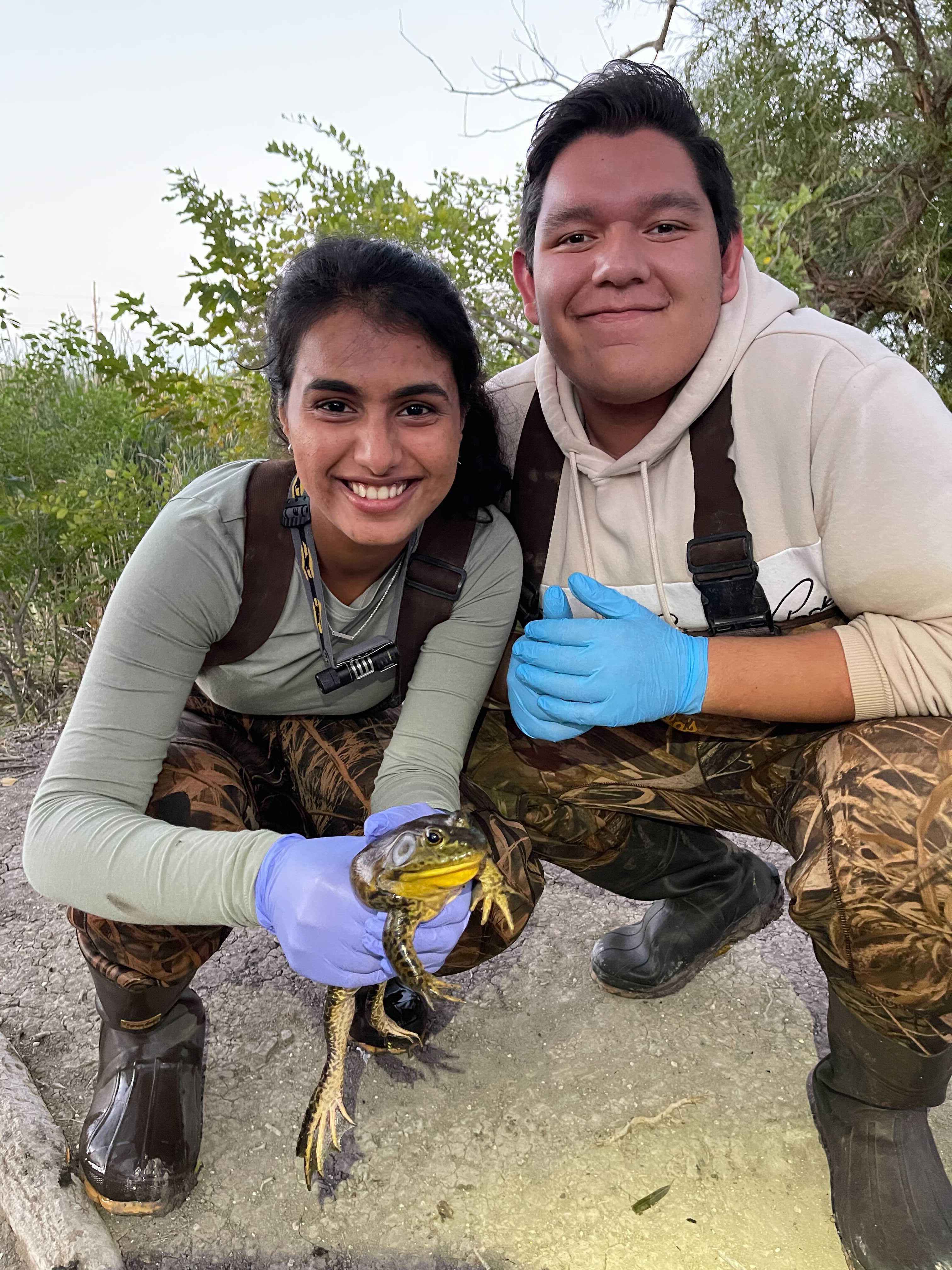 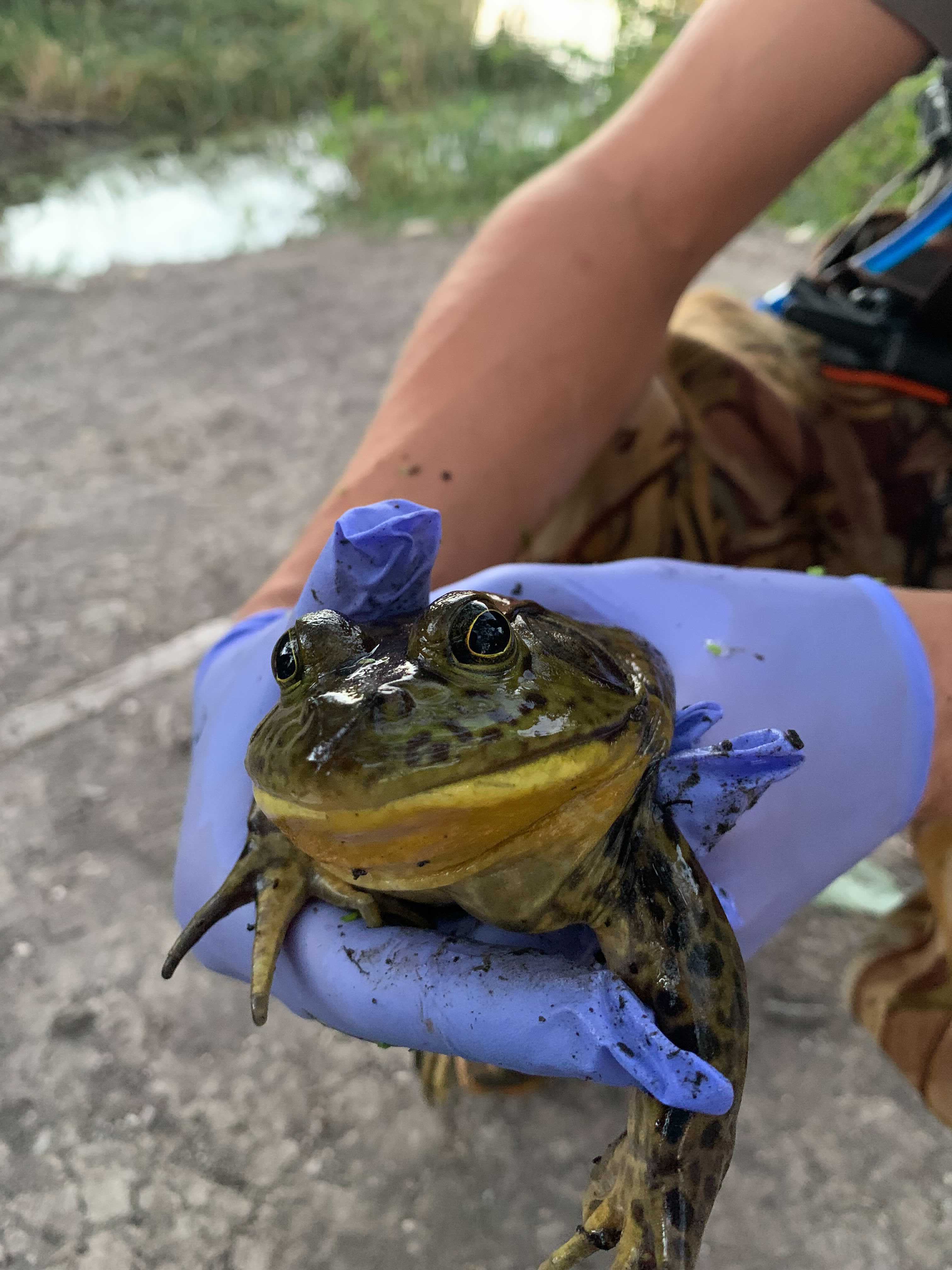 Dr. Barnes and his graduate students, Sadie Roth, and Seth Sutor took members of the Lubbock_TTU team out to a local park where chytridiomycosis was confirmed to be present. During this excursion, Dr. Barnes and his graduate students help us catch the frogs for us and perform our modified swabbing protocol to help us determine where on the frog there would be less presence of infection from Bd. They helped us swab the head, abdomen, the hinds legs, and the feet of the frogs. In-between each area of the frog, we used new swabs so that we could determine the amount of chitin found in each region of the frog. We did rinse the frogs in-between each swab as noted in the modified swabbing protocol as we did not have all of the necessary equipment to do so. We also did not have enough swabs to perform replicates. Since this was a preliminary run to see if our hypothesis had potential to be supported, the rinsing was not as important. We were able to catch 4 frogs in total. For each frog we swabbed their head, abdomen, hind legs, and their webbed feet. Once we obtained swabs in various areas of the frogs, Dr. Barnes helped us run a qPCR in his lab to show which areas had the least amount of chitin. However, we were unable to obtain results from the qPCR. *See Future Applications/Outlooks for more information*

Each frog will have a different environmental chitin load 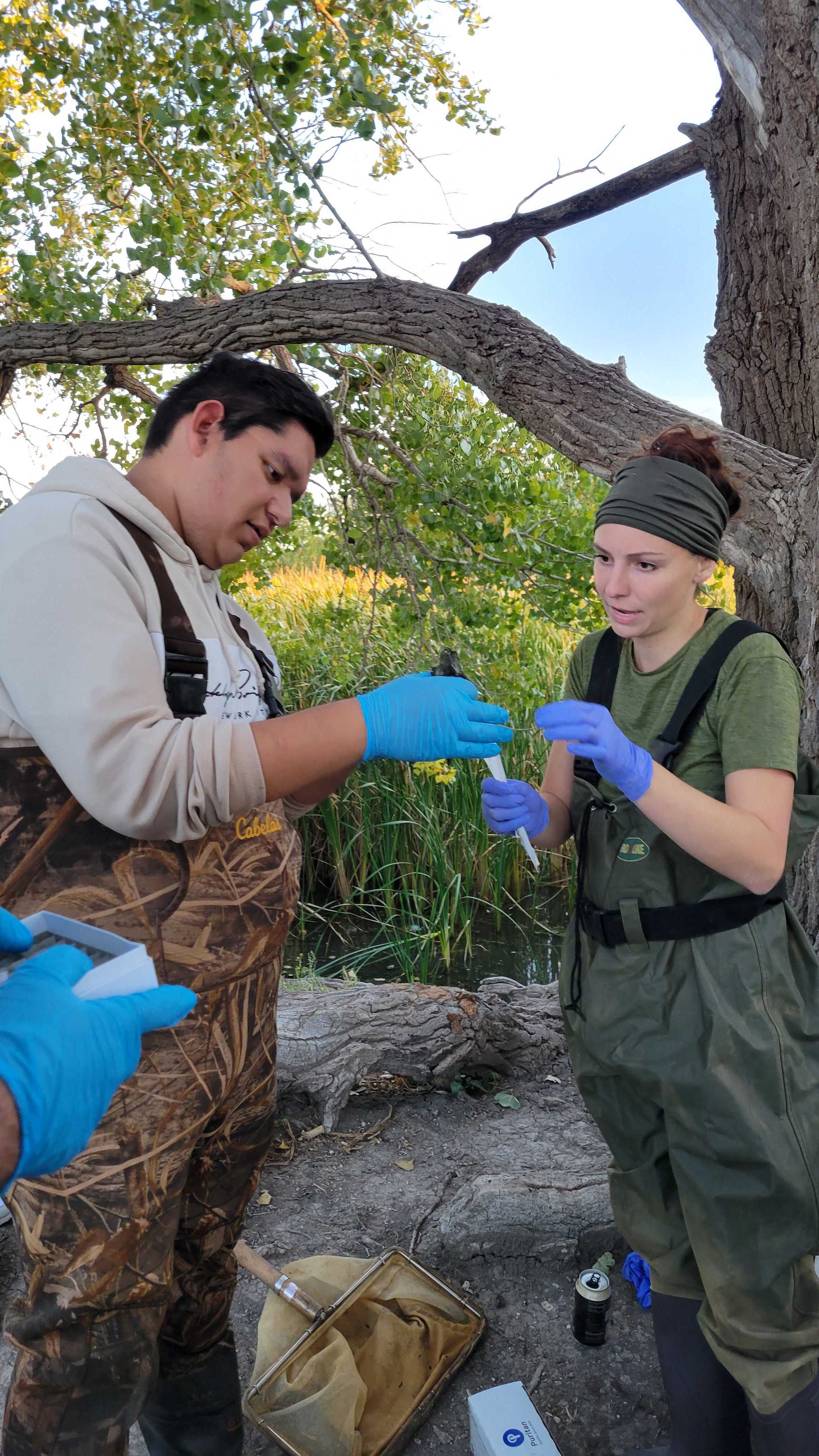 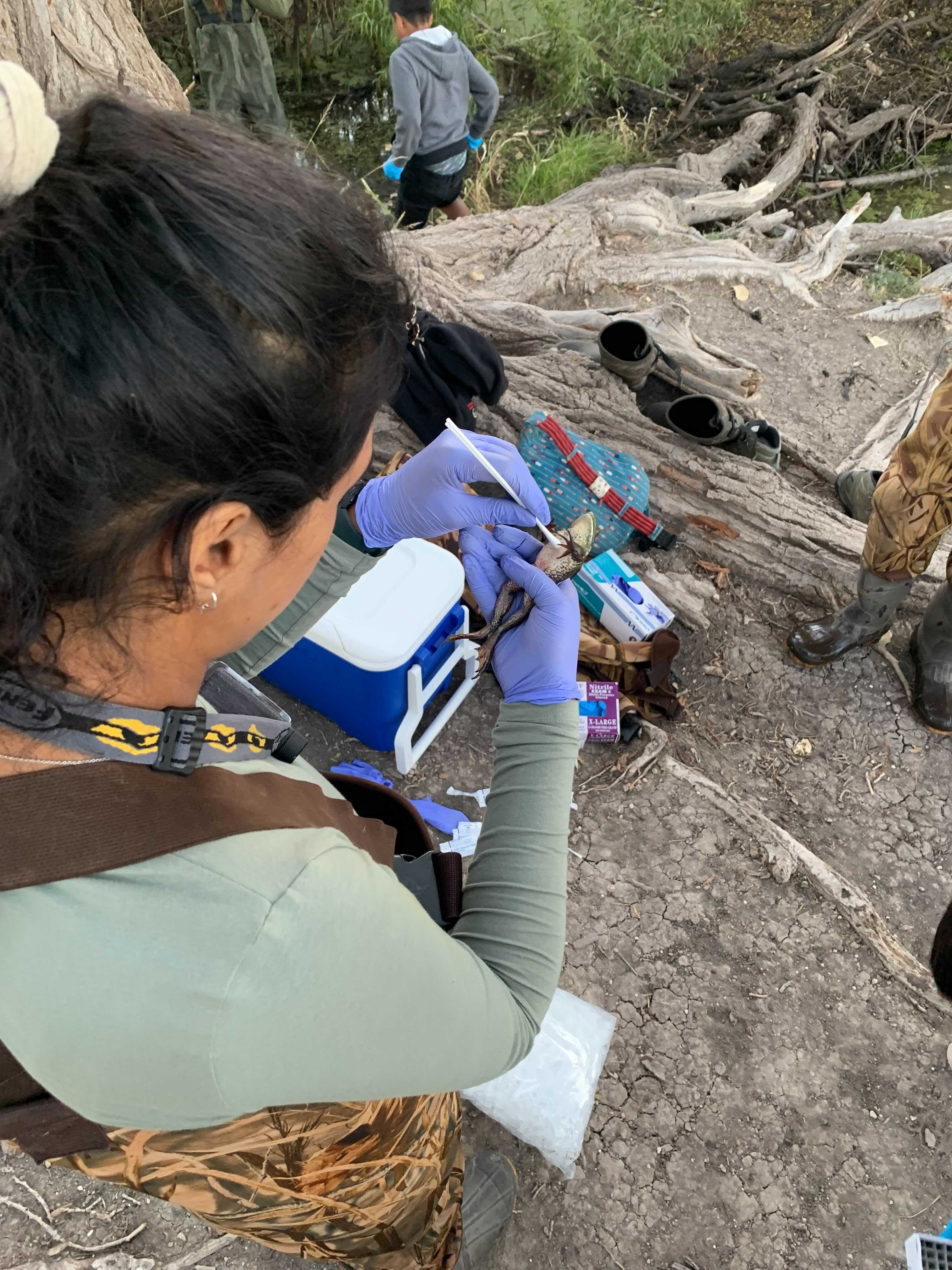