Abu Dhabiis another team that is focused on detecting Bd and Bsal. We were interested in them because we noticed in their promotional video that they were doing a cell-free biosensor. Since we are doing a live-cell biosensor, we wanted to see if there were any areas in our project that overlapped. We also wanted to know if there were areas a cell-free or live-cell biosensor fell short, but the other method could complement. We set up our initial meeting with them to share more details about each other’s projects. During this meeting, we were able to share resources with each other. We also shared our ideas and how they were relevant to our ideas. We also began to brainstorm together how their cell-free and our live-cell biosensor could work together. Through this collaboration we were able to learn how different biosensors could complement each other.

They were kind enough to give us Johannes Penner’s contact information. Dr. Penner is a researcher at Albert-Ludwigs-Universitat who has an active interest in biodiversity and conservation relating to amphibians and reptiles world-wide. To help with obtaining samples of Bd, we connected them with Dr. David Rodriguez so they could have the chance to test their microfluidic chip biosensor, Chytritect, with heat killed Bd.

The Abu Dhabi team was also open to learn about some issues we were having in the lab. We were unable to identify where we went wrong in one of our loop assemblies. Our problem was that our L2 parts with dummies was unable to transform. We sent NYU Abu Dhabi detailed information and our exact protocol we did in hopes that they and their advisors could provide us some insight on how to troubleshoot.

In addition to this, our team member, Paula Garcia, was able to help Abu Dhabi with wiki editing issues they abruptly faced, so they could meet the wiki freeze deadline.

Overall, we are very grateful to the NYU Abu Dhabi iGEM team for collaborating with us and we look forward to any future collaborations with them.

iBOWu-China sent out an open invitation for any and all iGEM teams from around the world to participate in their collaborative outreach project called ”BioDoodle”. ”BioDoodle” is a coloring book that is a brief introduction of biological concepts to all K-12 readers. The Lubbock_TTU team selected the topic of Fossils and our team member, Rigoberto, submitted a coloring page based off of Carbon-14.

Duesseldorf created the Postcard Project, where different iGEM teams all over the world submitted postcards to their team that briefly described their project and was creatively designed. Participating iGEM teams submitted multiple copies of their postcard to the Duesseldorf team and later on, received the postcards from the other participating iGEM teams! We participated in this project and our team member, Rigoberto, was in charge of the postcard graphics! 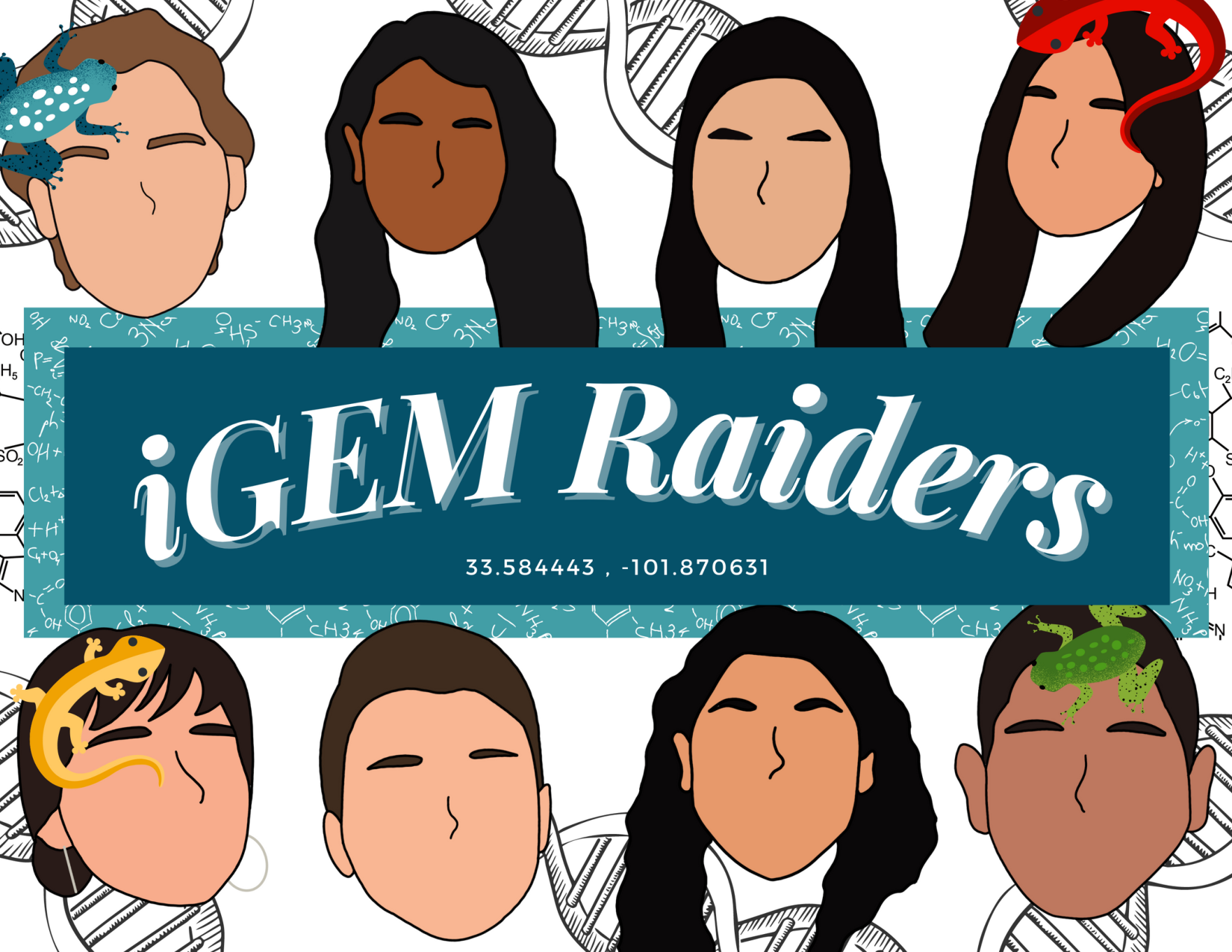 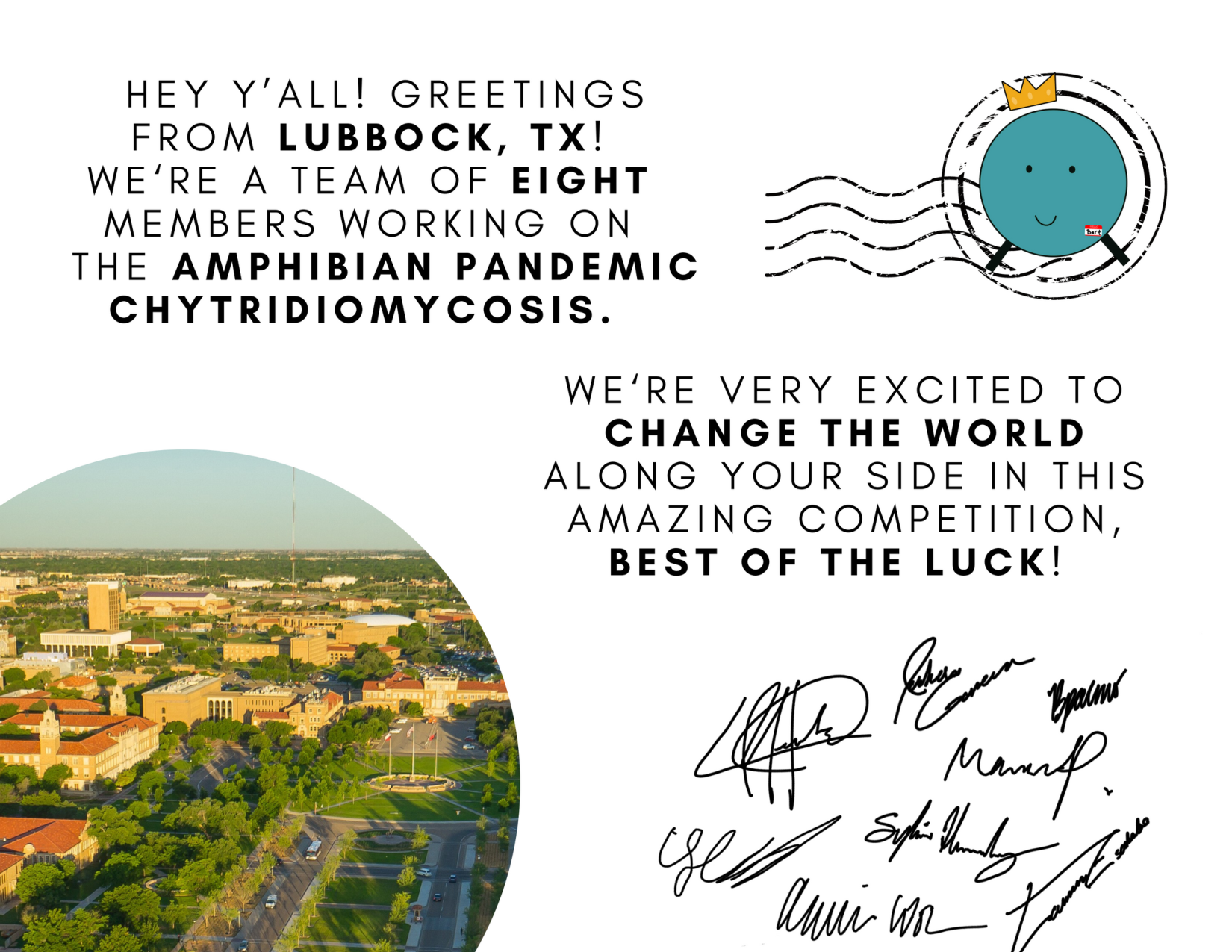 The Rubochum iGEM team are researching new methods to manufacture dairy products using DNA of cows and platypus to produce milk proteins and create synthetic platypus yogurt. Their use of platypuses also help bring awareness to their endangered species as they’ve been placed under constant threat due to the dairy industry in Tasmania. The Rubochum iGEM team sent out an email to various teams around the world. These questions asked things such as the respondent how often they consume animal/plant-based milk products, why they consume animal or plant-based milk products, and yogurt flavor preference.

The iGEM teams IISER Bhopal and IISER Mohali are targeting a cost-effective cancer treatment with minimal side effects, with the IISER Mohali team primarily focusing on oral cancer and the IISER Bhopal team primarily focusing on cancerous tumor cells. IISERB and IISERM contacted multiple teams around the world to send out a survey that would help them collect awareness data and opinions on general and oral cancer in order to improve their project.

The UNESP_Brazil iGEM team reached out and sent a survey to other iGEM teams around the world. This survey addressed the fees of iGEM’s registration and how the cost differed between different countries based on its minimum wage and local currency. The survey had open questions about project funding, registration pricing, where we were located and what our minimum wage was. They did this because a large part of the iGEM cycle is coming up with the funds necessary to conduct our research and be able to participate in the Giant Jamboree.