On this page the genetic engineering strategy to produce alpha amylase can be found. An overview of how alpha amylase has been integrated in our constructs, expressed in Saccharomyces spp. and measured can be found in Figure 1. 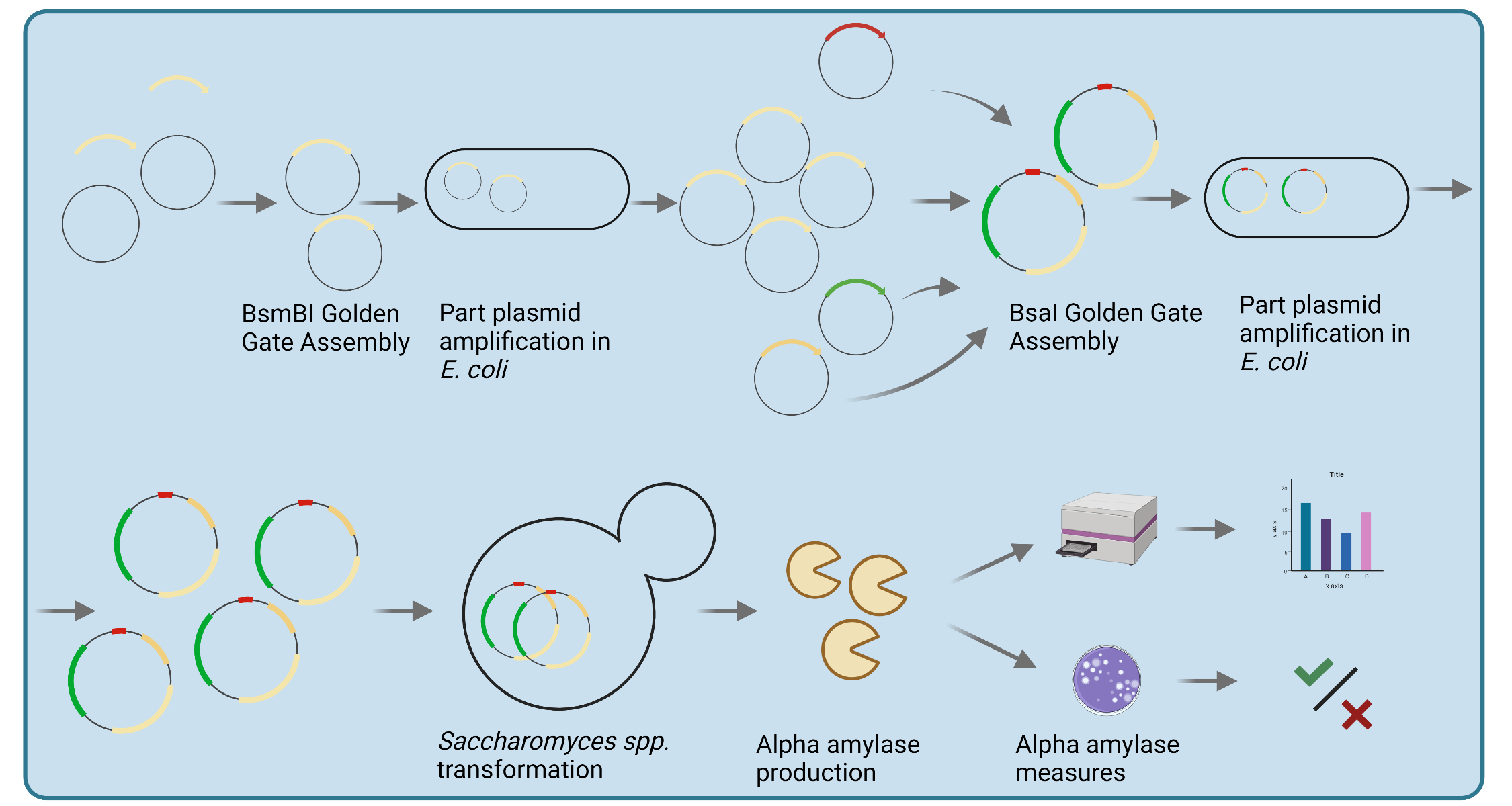 The main engineering challenge our team is working on this year is producing the most functional alpha-amylase enzyme. We characterised the activity of four different alpha-amylase genes, originating from 4 host organisms, Bacillus amyloliquefaciens[1], Bacillus licheniformis[1], Bacillus subtilis[1] and Aspergillus oryzae[1]. We chose these enzymes as they are well reviewed and annotated, furthermore, they have proved to work in similar conditions to the ones found in the cow’s rumen. These genes were expressed in the chassis Saccharomyces cerevisiae and Saccharomyces paradoxus, as it can feed in ammonia as a only nitrogen source, an essential part of our project (see more on Description page).

Modularity is a very important feature of our engineering process, as this year we are dealing with a lot of different variables in each genetic element and we wanted them to be able to be easily interchangeable. In order to optimize the Design-Build-Test-Learn cycle (DBTL cycle) we built a selected library of constructs out of the full spectrum of possible combinations and we used AI technology to learn from the set of samples.

The genetic elements present in our construct are a promoter (Part 2), two different versions of each alpha-amylase gene (Part 3); one consisting of the native sequence that also codes for the secretion peptide (SP) and one in which the SP has been engineered and substituted by characterized yeast SPs, finally the terminator (Part 4) is added. The basic configuration of the constructs can be found in Figure 4.

The Parts containing the 4 different alpha-amylase genes were designed according to the Golden Gate MoClo Assembly technique. The 4 different alpha-amylase genes were built to be Part 3 and Part 3b according to the MoClo assembly strategy as can be seen in Figure 3, this part refers to the coding sequence. The genetic design can be seen in Figure 5 and 6. Additionally, various promoters and terminator from MoClo Toolkit (Kit #1000000044) were used. By using these different promoters we tried to find the best way to express our gene of interest. An overview of the different promoter and alpha-amylase parts used can be found in Table 1. The backbone vector pRS426__ConLS'-GFPdropout-ConRE'-URA3-2micron-Kan was used in all the constructs (Figure 2). The vector contains Parts 1 and 5 - 9 of the kit, to see the full composition of the vector and the components of it check Figure 3. Furthermore, the vector contains selection markers for both E.coli and Saccharomyces spp. (kanamycin and URA marker respectively), and a GFP drop out which facilitates the screening of successful assemblies. 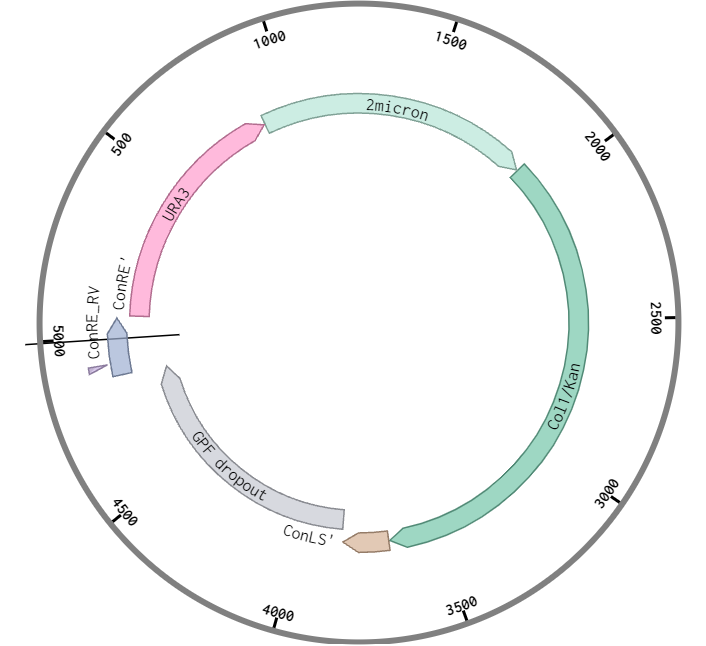 Figure 2. Backbone used as a vector for all the constructs tested. GFP dropout was used to screen for colonies that took in the correct plasmid.

Figure 4. Diagram displaying the different elements of the genetic construct. As we are using the Golden Gate MoClo Assembly technique. The number refers to the corresponding part of the cloning technique. A) Construct with the native sequence of the alpha amylase, B) Construct where the native SP has been substituted by a yeast secretion peptide from[3].

The 4 different native alpha-amylases were designed in a similar way, we obtained the sequences from the Uniprot database and optimized them for our cloning goals. We codon optimized the original sequence for our chassis and we added the corresponding overhangs to prepare it for the Golden Gate Assembly technique. In order to do that, we added some sequences up and downstream the genes. These sequences correspond to the recognition sites of the restriction enzymes type IIS BsmBI and BsaI (Figure 5).Using two different restriction enzymes allows for a two steps cloning strategy. Firstly, integration of the new design part (alpha amylase genes) into an E.coli vector, pYT001, by a digestion and ligation protocol with BsmBI. This way the new part is already assembled in a vector and can be easily multiplied. Every Part of the kit is assembled in this type of vector, which has a chloramphenicol marker so that the parts can be amplified in E. coli. Next, the BsaI restriction enzyme is used to assemble the Part plasmids together , in what is referred to as cassette plasmid. The cassette plasmid is first amplified in E.coli, before downstream cloning in the desired chassis; Saccharomyces spp. More information on this below (Cloning pipeline )

Once the sequence was designed the genes were ordered and synthesized de novo.

Figure 5. Overhangs of alpha amylase gene, Part 3 of the final vector. The sequences were added in the four alpha amylases genes.

Part 3b was designed based on Part 3, using primers to amplify the desired sequence from the de novo synthesized alpha amylases. The aim of this part is to code for the alpha-amylase protein, excluding the native secretion signal. The idea behind this exclusion is adding more variability to the library of samples created, as the secretion signal has been proven to be a bottleneck in the production of a secreted enzyme[4]. Secretion peptide sequences are well annotated, therefore, identifying them wasn’t an arduous task. We designed primers that will only amplify the desired part of the alpha-amylase sequence and add the sites of the enzymes of interest (BsmBI and BsaI). The primers designed can be seen in Figure 6.

Figure 6. Design of the primers used to amplify Part 3 and create Part 3b.

The creation of Part 3b involved one PCR reaction amplifying only the secreted enzyme sequence, therefore, before using the part for downstream cloning steps, PCR results needed to be verified. To do so, an 1% agarose gel electrophoresis analysis was performed (Figure 7). In addition, to make sure no mutations occurred during the cloning process the entry vector was sequenced. (see the Results page ). 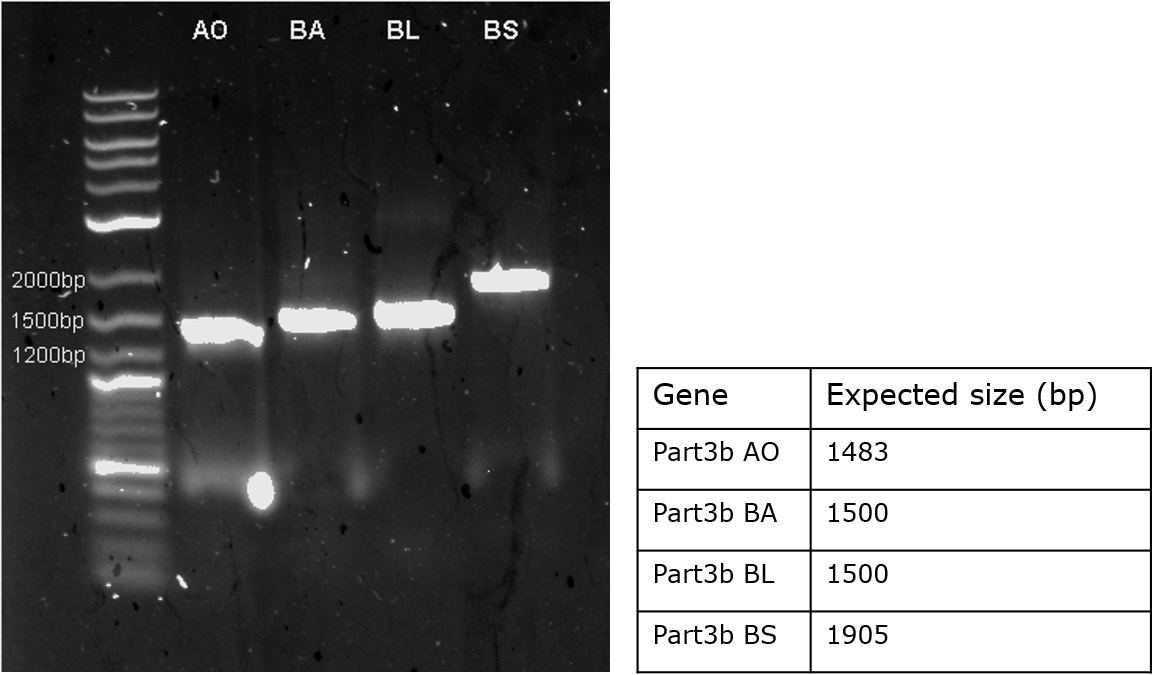 Figure 7. Agarose gel from PCR to amplify Part 3b from Part 3. The sizes are the ones expected.

For understandability purposes an overview of the cloning pipeline is summarised below.

Part 3 and Part 3b were inserted into the vector pYT001, the “entry vector”, that contains a resistant marker for chloramphenicol, so the vector can be amplified in E. coli. This insertion was done in a Golden Gate MoClo Assembly with BsmBI. After that, we performed a Golden Gate MoClo Assembly with BsaI where all the parts were included, part plasmid for Part 2 (promoters), Part 4 (terminators) and Part 3a (secretion signals) was taken from the kit. E. coli was also used to amplify the product before transforming our chassis, Saccharomyces spp. A visual explanation of this can be seen in Figure 8. 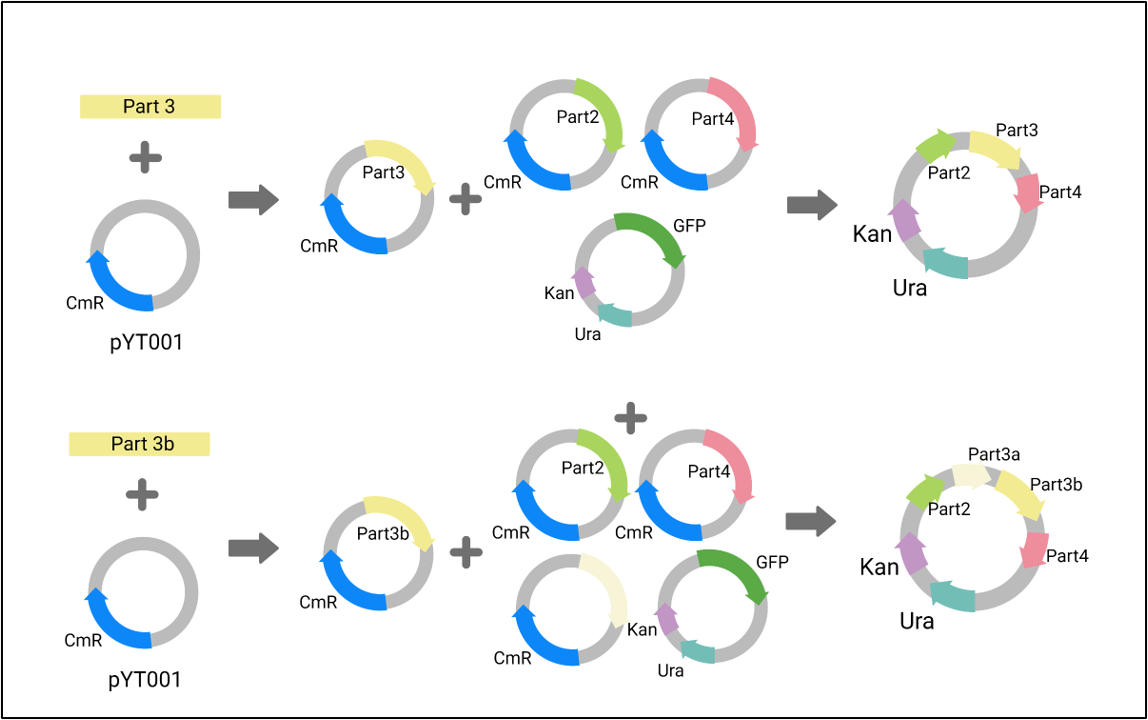 Figure 8. Cloning pipeline to create the library of constructs. In the first Assembly BsmBI is used, while in the second digestion, BsaI was added.

To prove that we are producing a heterologous functional enzyme in Saccharomyces spp. we decided to use different assays, one of them being a starch assay. Starch is broken down into smaller saccharides by the enzyme alpha-amylase. By adding starch to the media and checking whether it is being degraded we can measure if alpha-amylase is being produced and, what is even more important, whether it is functional. Production and functionality were also tested through the alpha-amylase kit assay. This assay provided quantitative data from high throughput experiments. Illustrations on how alpha amylase is measured can be found in Figure 9. To find out detailed protocols on how to perform the experiment go to the Experiments page 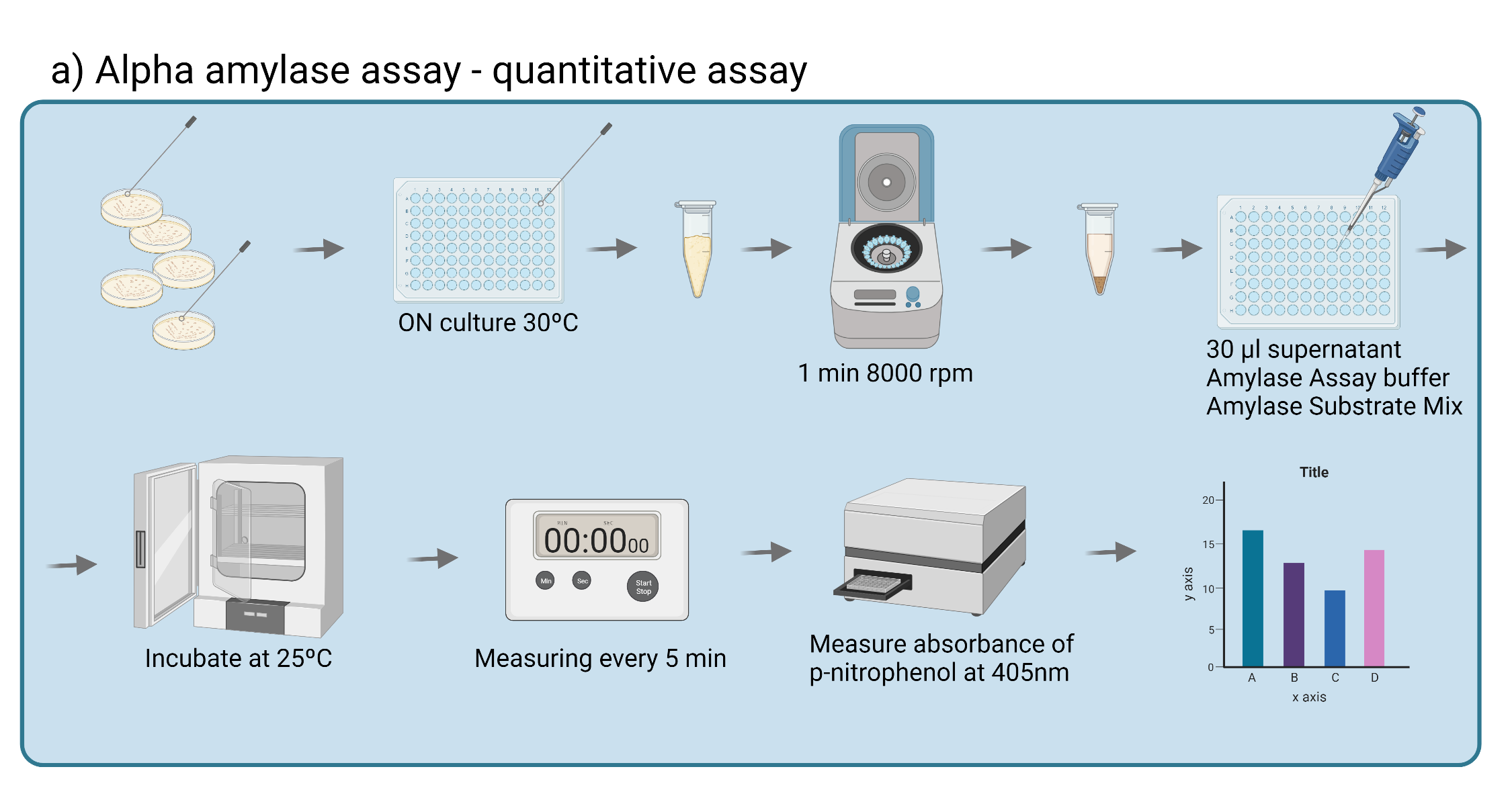 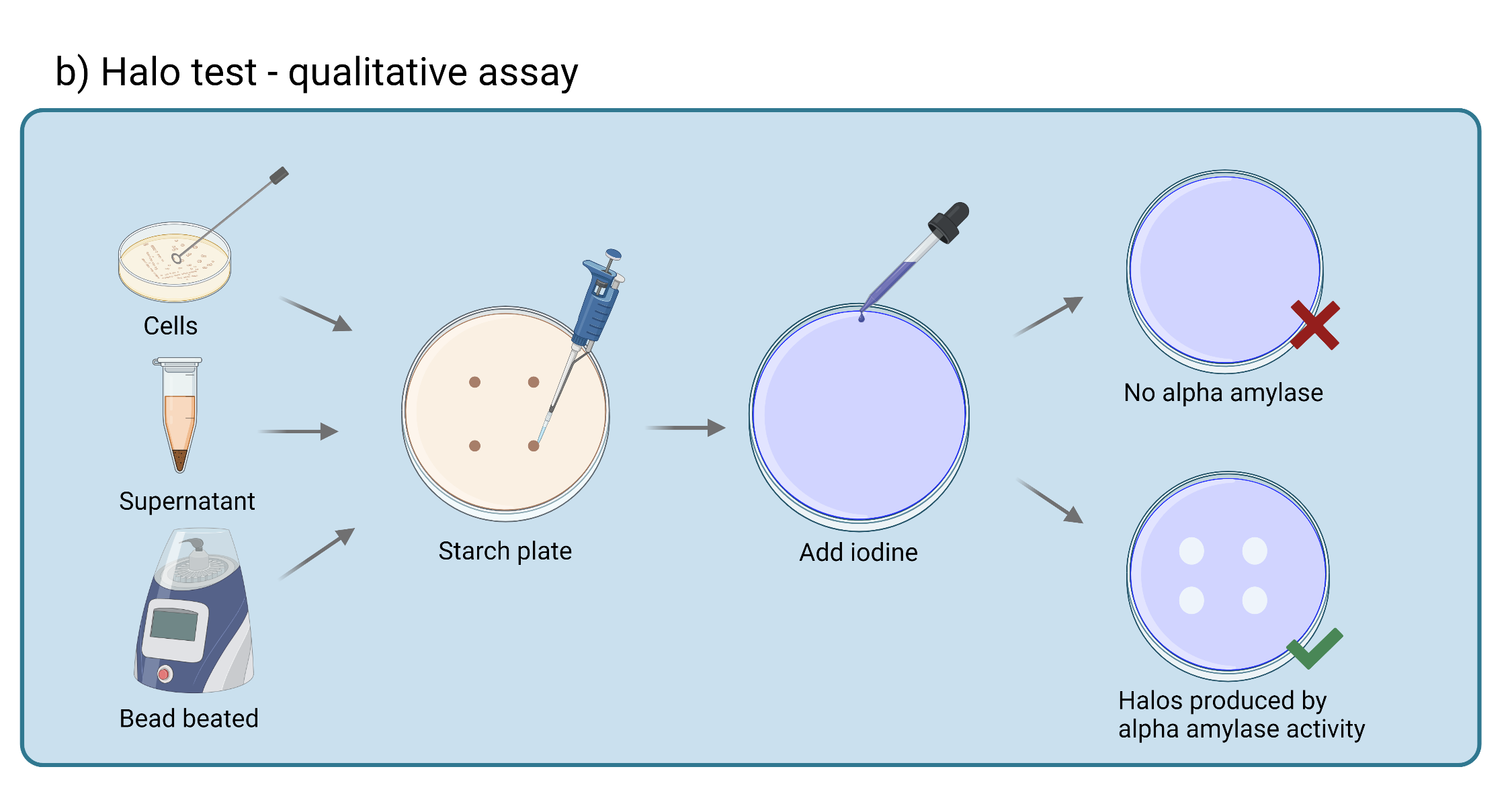 Figure 9. Alpha amylase production was evaluated through two assays. a) Kit assay, it is a quantitative assay that uses colorimetric output to measure the alpha amylase activity, more information on how the kit works can be found in the Experiments and Results page. b) Halo test, qualitative essay through which the cleavage of starch by alpha amylase can be assessed.

On this page, evidence about the performance of basic parts can be found, for extended results go to the Results page.

We created a library from all the possible combinations and based on preliminary results some of the samples were tested in the halo test. Sample SP027, which was composed by the promoter pRNR1, Part 3 from B. Subtilis and tTDH1 was expressed in the yeast ySB76 (S. cerevisiae). We used different methods to check for the intracellular alpha-amylase and compare it, results can be seen in Figure 10, detailed protocol can be found on the Experiments page. Overall, the halo is not visible when you use the cells, and it increases when plating the supernatant of liquid cultures (where alpha-amylase is supposed to be found), even more when cells are lysed previously. The latest result shows that alpha-amylase from B. subtilis is present in both the supernatant and inside the cells. 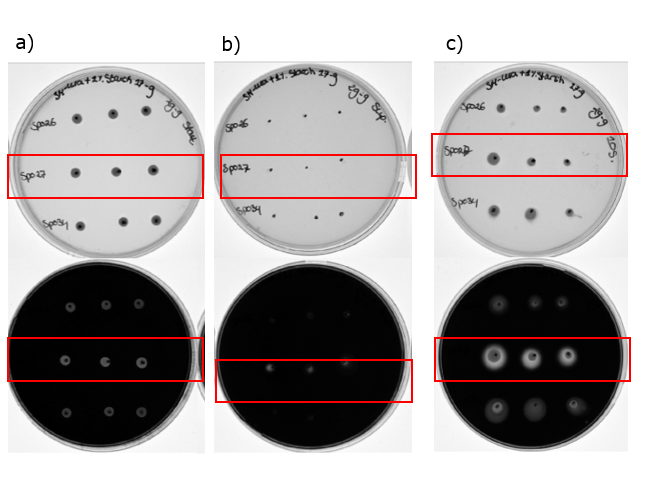 Figure 10. Triplicates of halo test in sample SP027, alpha-amylase from B.subtilis. Different products of the cells were used to compare the activity, a) Yeast cells, b) cells’ supernatant from liquid cultures and c) lysate from cells by bead beating them during 10s.

Through the colorimetric assay which is based on the same principle we could prove that the other Part 3 from A. oryzae, B. amyloliquefaciens and B. licheniformis were also producing functional alpha amylase (and confirm the one from B. subtilis). Detailed protocol can be found in the Experiments page. We tested different constructs (see Parts page) and here we provide evidence of the basic working parts (Figure 11). The increase in absorbance observed in the graphs is an indication of starch degradation, an indirect measurement of alpha amylase activity. 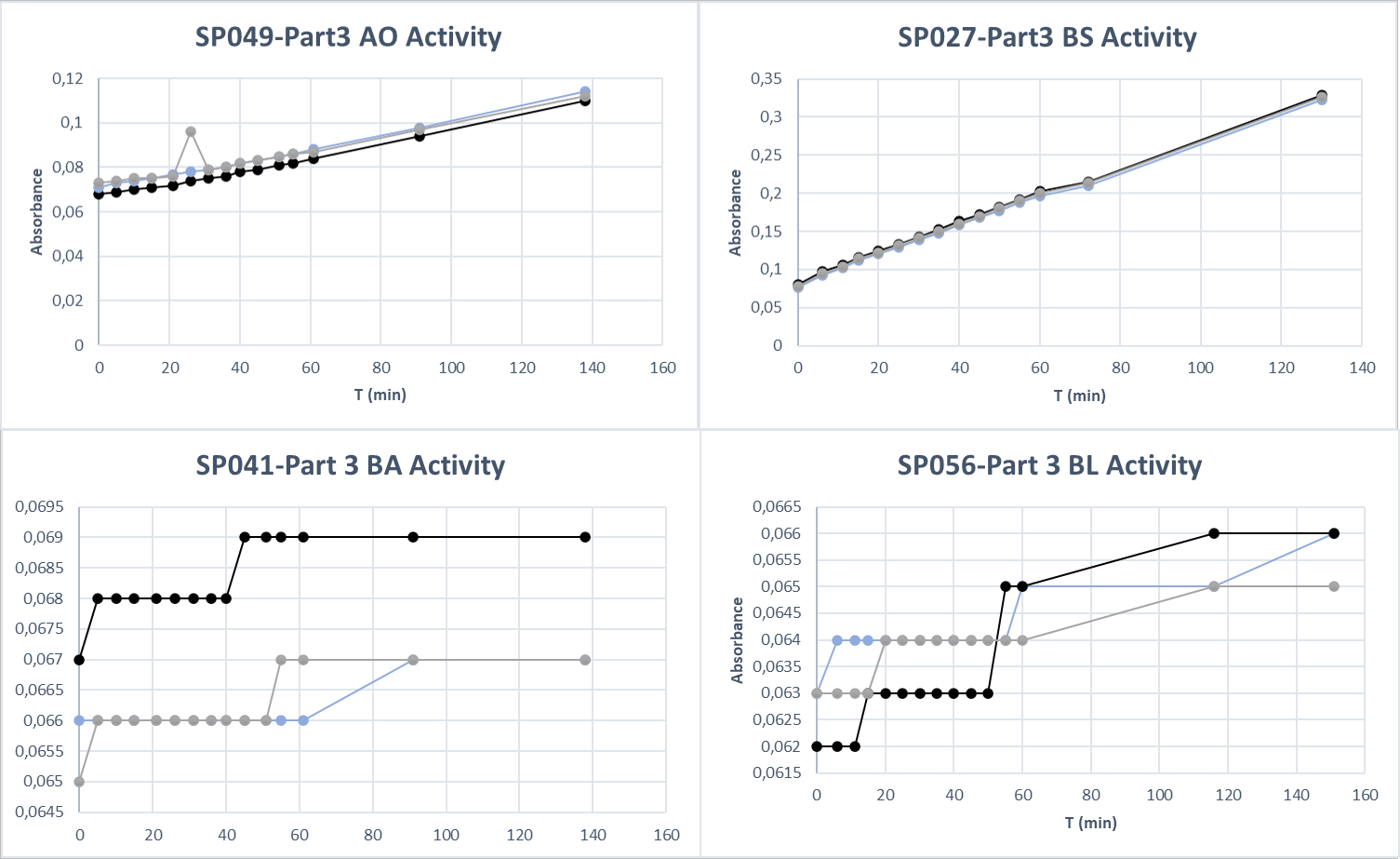 Figure 11. Alpha-amylase activity of the different Parts 3, from B. subtilis (BS), A. oryzae (AO), B. amyloliquefaciens (BA) and B. licheniformis (BL). Measurements were taken in triplicates. All the samples show an increase of absorbance (indirect measurement of the activity) in comparison to the baseline.

Some of the samples that contained different Parts 3b were also tested in the halo essay. Parts 3b alpha-amylases from B. amyloliquefaciens, B. licheniformis and B. subtilis were evaluated and showed results, which can be seen in Figure 12 and 13. SP001 contains pPGK1, αMF as a secretion signal, Part 3b from B. subtilis and tTDH1 (expressed in S. cerevisiae). SP021 is composed of pPGK1, αMFΔ, Part 3b from B. amyloliquefaciens and tTDH1 (in S. cerevisiae). Finally, SP051 has pRNR1, αMF_no_EAEA, Part 3b from B. licheniformis and tTDH1.

In sample SP001 almost no halo was observed when plating the cells. However, the halo becomes clear when the supernatant or the cell lysate is used, showing that alpha-amylase is active both intra and extracellularly. In the case of sample SP021, a halo was already observed in the cells plated (Figure 12a), as well as the supernatant and bead beated cells. The pattern observed in SP051 differs a bit, as alpha-amylase is only active when lysing the cells, most likely what is not working in this case is the secretion signal, but alpha-amylase is being produced. 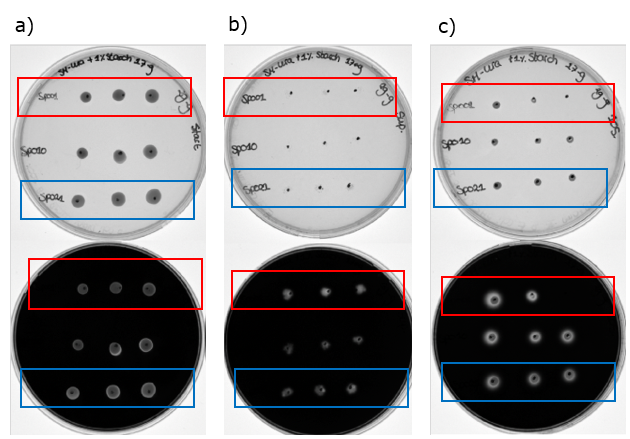 Figure 12. Triplicates of halo test in samples SP001 (red) and SP021 (blue). Different products of the cells were used to compare the activity, a) Yeast cells, b) cells’ supernatant from liquid cultures and c) lysate from cells by bead beating them during 10s. 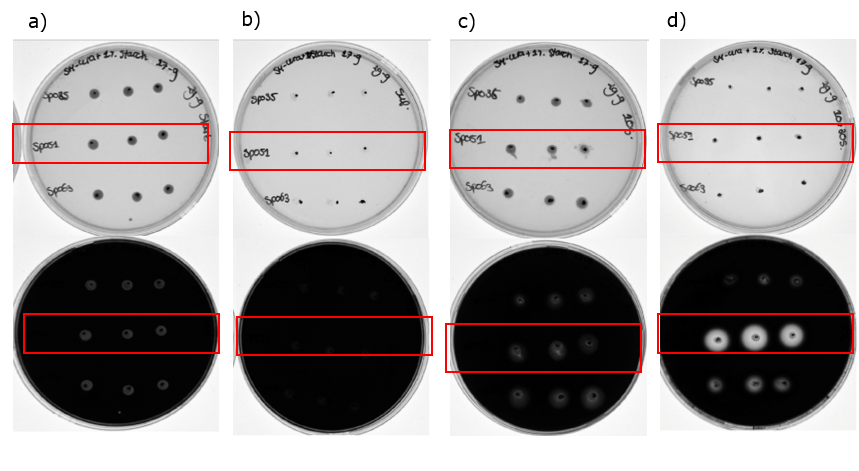 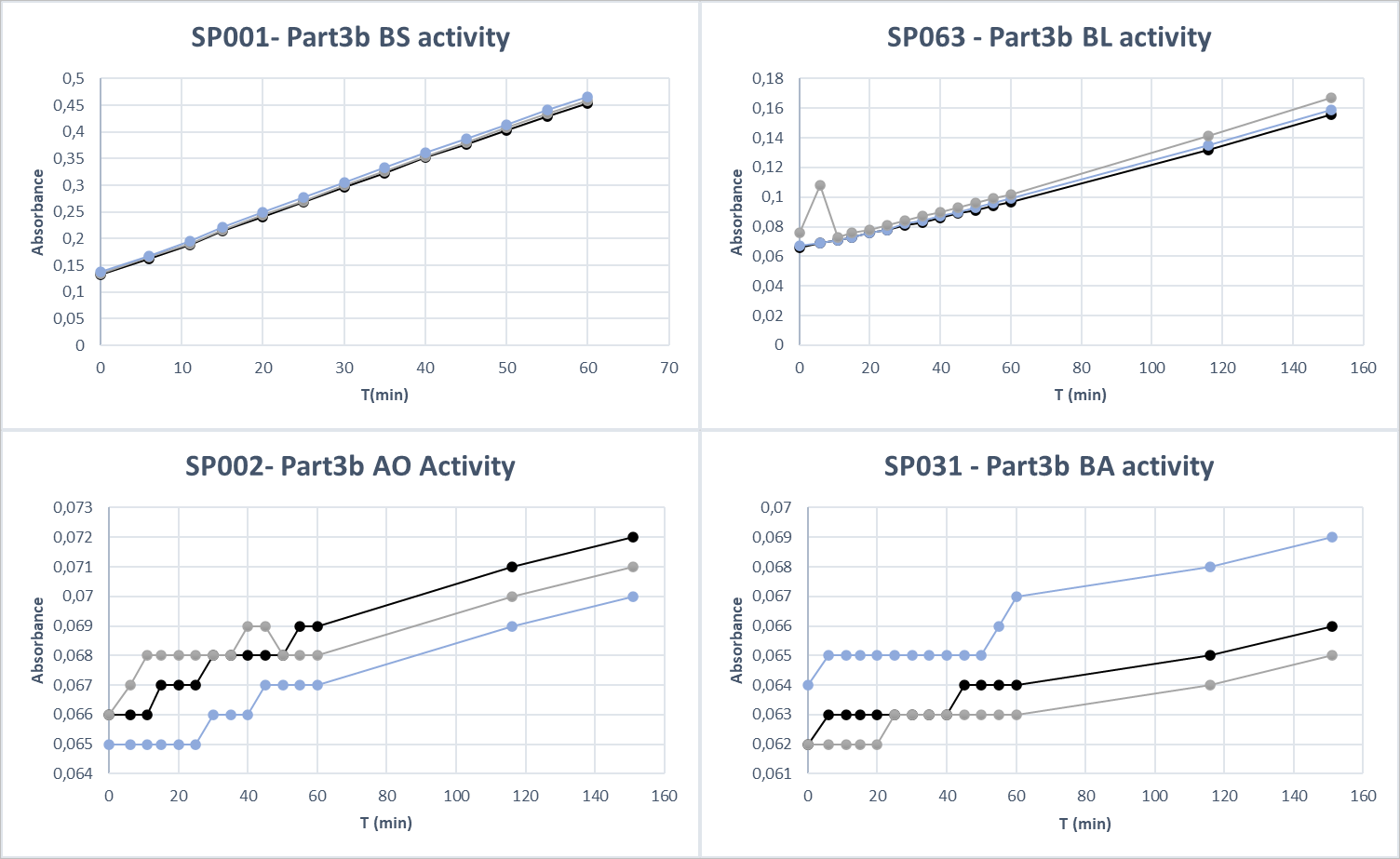 Figure 14. Alpha amylase activity of the different Parts 3b, from B. subtilis (BS), B. licheniformis (BL), A. oryzae (AO), and B. amyloliquefaciens (BA). Measurements were taken in triplicates. All the samples show an increase of absorbance (indirect measurement of the activity) in comparison to the baseline.

Having proved that Saccharomyces spp. is capable of producing alpha-amylase, we wanted to go further and see how the yield could be improved. The modularity of the Golden Gate Assembly inspired us to try different promoters (with varied strengths), secretion signals, alpha-amylase genes and yeast strains. The different elements in each category can be found in Table 1.

Table 1. Elements that can be combined to produce alpha amylase. 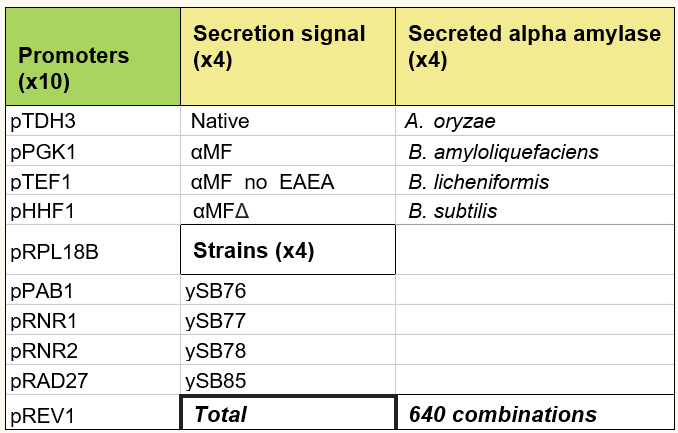 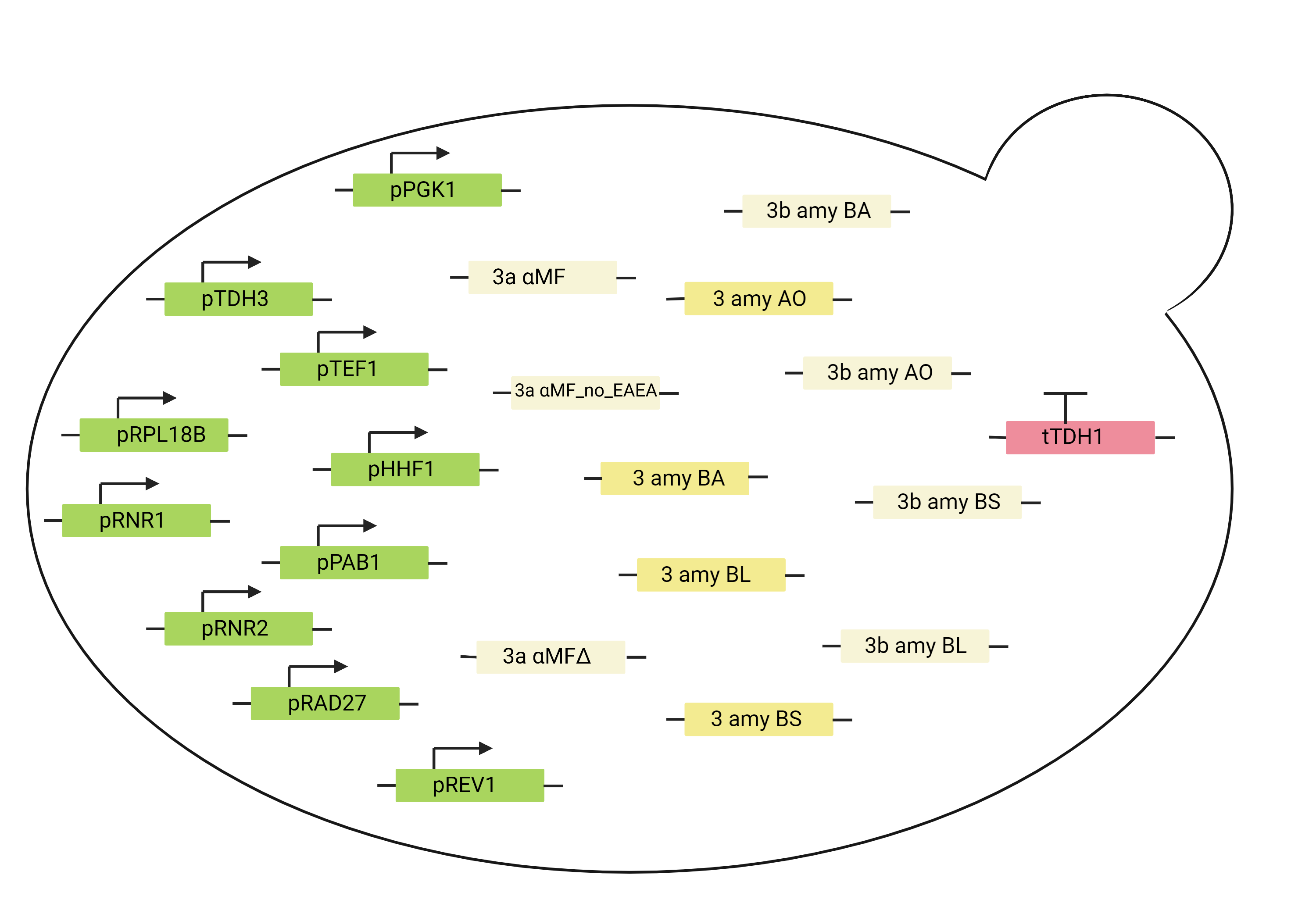 Figure 15. Different elements from the categories. Promoters are represented in green, alpha amylase and secretion signals are yellow and the terminator is red.

Table 2. Subset of 10% of the possible combinations. SP - Signal peptide.