Machine Learning (ML) can be quite an intimidating subject for most students unfamiliar with the topic. Our aim is, however, to make our implementation accessible to, and more importantly understandable for, everybody. Therefore, we not only refrained from using complicated ML jargon, we also tried to explain some key concepts behind ML. This way, our Modeling page functions as a crash course in the subject of ML, while simultaneously providing an example of how ML can be incorporated in an iGEM project. We consider both of these aspects to be very useful for future iGEM teams searching for ways of incorporating ML into their own project.

The same strategy was applied when explaining how to use and interpret the code we used for our implementation of the ART. Our Github repository provides easily accessible source code that can be used as inspiration for anybody interested in using the ART. Although some rather difficult subjects are discussed, the language used while discussing it was chosen carefully to be understandable for those with limited experience in statistics, ML, or data science.

Before we settled on our current project idea, in which we focus on the assimilation of ammonia (into a feed additive that reduces ammonia emissions), we first looked into the possibility of enzymatic breakdown of ammonia. More specifically, we were looking into the possibility of creating a biofilter containing microorganisms that could convert ammonia back into atmospheric nitrogen, which is not harmful to nature. For this project idea, we were mainly inspired by iGEM team DTU-Denmark 2013 and iGEM team Virginia 2017. In this section, we explain all the background research we did on this topic, so next iGEM teams can build upon it.

In order to break down ammonia (NH3) to atmospheric nitrogen (N2), we would have to engineer the microorganisms to produce several enzymes that would each catalyze a specific step of the step-by-step breakdown. Each enzymatic step would then produce a specific product, which would be used in the next step in the breakdown process. However, we soon found out that this approach had many downsides, making the execution of this project not only infeasible for the timespan we had, but also undesirable for real life application. Hence, we decided to explore other alternatives as a solution to the nitrogen crisis, eventually leading us to our final project idea. The downsides that we encountered were:

Genes that needed to be cloned

In order to enzymatically break down ammonia to atmospheric nitrogen, the following conversions would need to happen:

For our final project idea, we aimed to tackle the (ammonia part of) the Dutch nitrogen crisis by lowering ammonia production in cattle. To be able to tackle this problem accurately, we did a lot of background research on both the Dutch nitrogen crisis, as well as how ammonia gets produced by cattle and how this production can be lowered. The results of this background research can be found on:

Due to the large data set we want to create, we envisioned it is important to think about “How to deal with a large library of constructs”. In order to have a clear overview of the different combinations of promoters, signal sequences, genes and the terminator, a library was developed for 10% of the 640 possible combinations. This library, which can be found on the parts page, was used during the assembly of the constructs so the wet lab team members could keep track of the simultaneous experiments. To make this process easier, each team member was responsible for a certain set of constructs from the parts assembly to the transformation in Saccharomyces spp. In the notebook of the wet lab, this division of constructs and tasks was described. During the assembly and transformation of the cassette plasmids, several wet lab team members worked parallelly, making it possible to assist others when needed and creating a working atmosphere. This way all the experiments ran smoothly and all the cassette plasmids were made within a week.

A big part of our own Human Practices work was based on interviews with stakeholders. To ensure that these interviews were handled responsibly and data protection and informed consent were ensured in all our work, we did quite some background research and brainstorming on our data collection, data storage, data protection legislation that concerned us and what would be the best way to handle the ‘aftercare’ of our stakeholders. Since this took quite some time, therefore, preventing us from reaching out to all the stakeholders we wanted to reach out to, we have drafted two flowcharts and a template that can help next years' iGEM teams in ensuring that when they talk to stakeholders that they do so responsibly without having to spend half their iGEM season brainstorming and doing background research. The three documents are meant to be used together: first, you use a flowchart to navigate your questions about your data collection and data storage. Then, you can use a template to draft your information and informed consent sheet. And lastly, you can use a flowchart to guide you through the steps of contacting stakeholders and processing the results. Both flowcharts and the template is discussed in more detail on our Human Practices page, but the documents can also be found here: 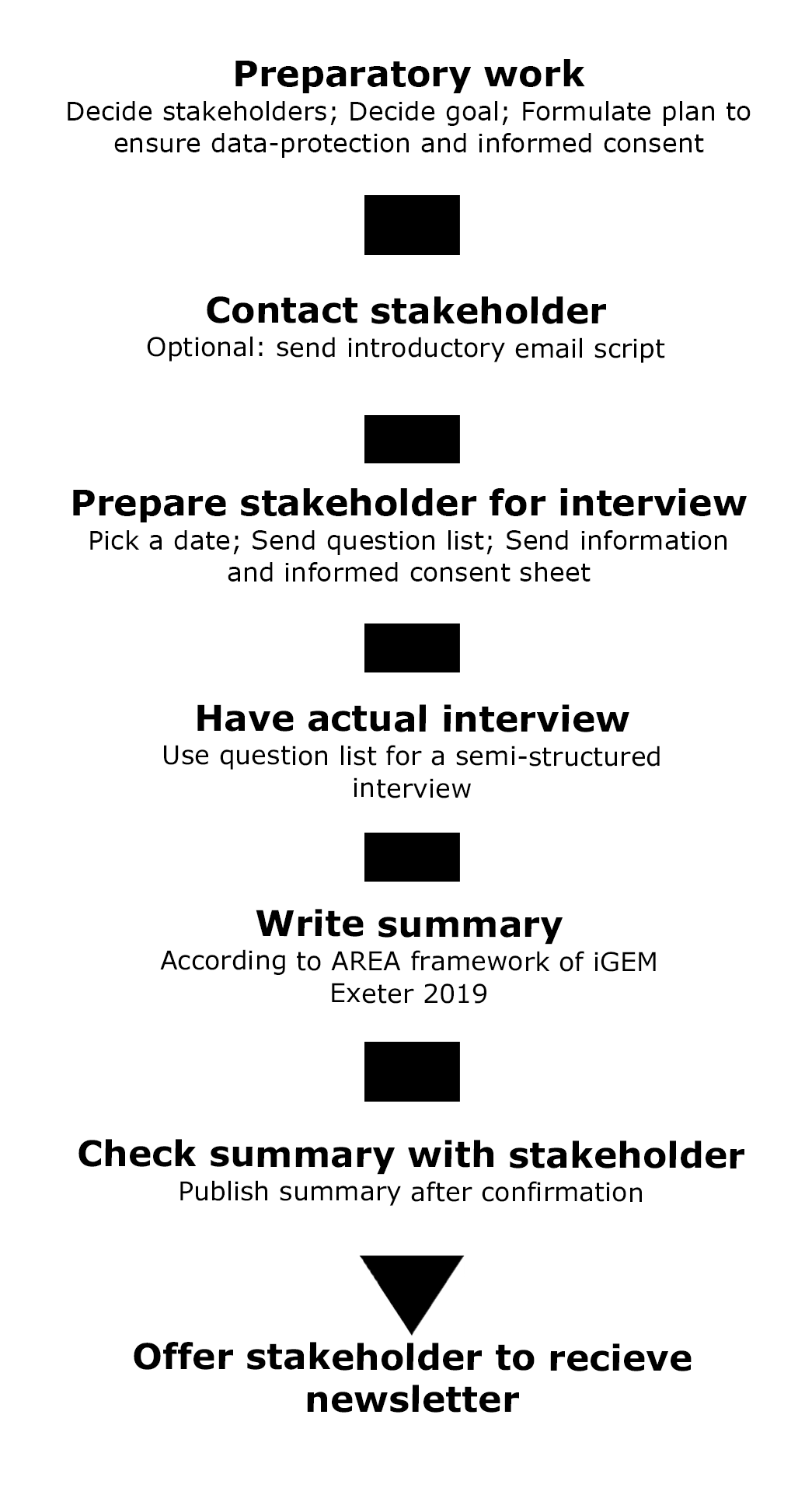 Step 3: Flowchart for steps to take when contacting stakeholders

With the same environmentally friendly intention in mind as our project, we wanted to make sure we use up any residual chemicals and kits from previous iGEM Groningen teams in the most sustainable and frugal way possible. Since the University of Groningen has a long history of iGEM teams competing successfully throughout the years many different chemicals, buffers, miniprep and PCR purification kits have been abandoned in storage (Fig.1). This year, after the past iGEM season when no one used the iGEM laboratory, we took upon ourselves to clean up and organize the big storage units filled to the brim with reagents, most of which were still within the expiration date (Fig.2). 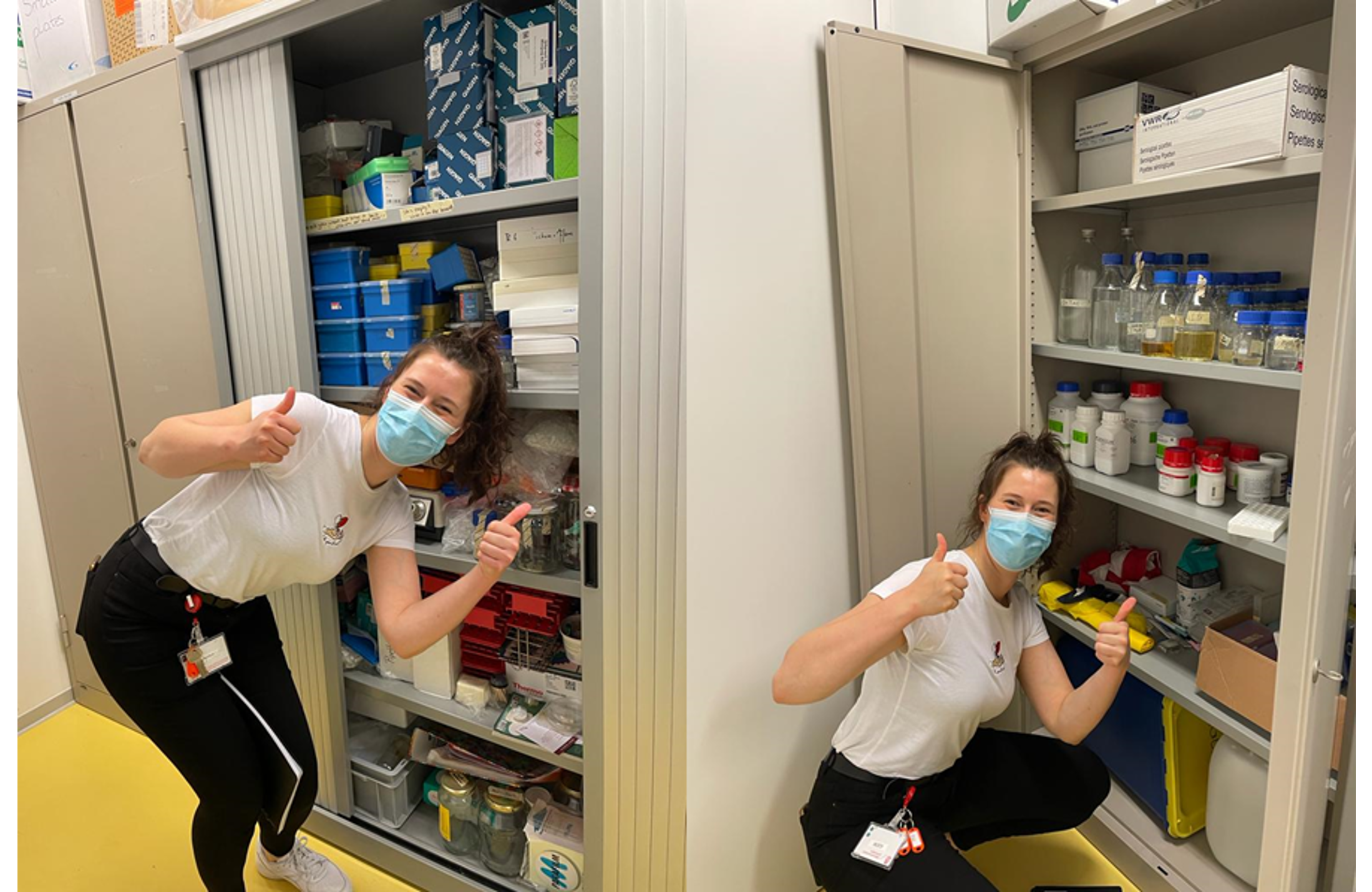 Figure 1: Before - The abandoned storage with old and used kits, chemicals and other materials from previous iGEM Groningen teams 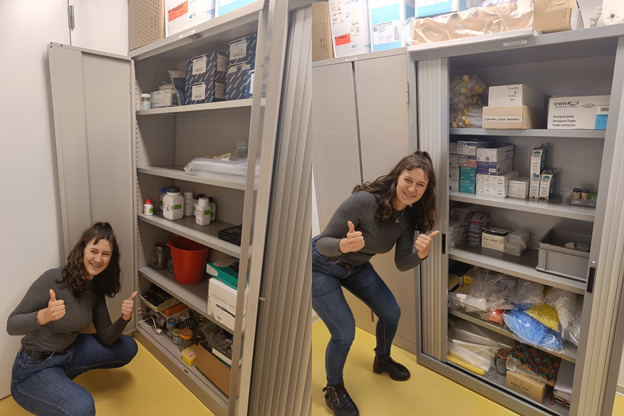 Figure 2: After - The now organized storage

In order to examine the functionality of miniprep kits, used for purification of plasmids from our chassis, simultaneous experiments were conducted using a brand new kit and a previously used kit. In order to observe purification differences using the different kits, the DNA concentration was measured using a Nanodrop spectrophotometer, quantifying the DNA concentration at a spectrum of wavelengths.

The A260/280 ratio represents the purity of the DNA, and ideally, the value would be approximately 1.8. The samples measured after using the old kit have seemingly correct values for this ratio, as can be seen in Table 1. However, the total DNA concentration is surprisingly highcompared to the results obtained when using the new kit. To make sure that the buffers from the old kit were not contaminated with DNA, MilliQ was used as a control. As is evident in the results table, DNA could be measured in the MilliQ samples using both kits. Nevertheless, the concentration of DNA in the MilliQ sample using the old kit was 6-fold higher in comparison to the new kit. Therefore, it can be concluded that the buffers from the old kit most likely were contaminated with DNA. In order to use an outdated miniprep kit in a safe way, the above-mentioned experiment should be conducted where MilliQ is used as a reference sample.