Generation of cerebral organoids from hiPSC

Current methods for generating cerebral organoids are labor-intensive and extremely time consuming, mainly due to the individualized handling of each of the mini brains in various steps such as transferring and encapsulating in extracellular matrix (ECM) dorms (for more details, see design). We refined the existing protocol for cultivating cerebral organoids (mini brains) to enhance its through-put and reduce the human labor needed by using the microfluidics system. Microfluidics is an emerging field of technology that allows the handling of very small volumes of fluid in an automatic and high throughput manner. In our interest, we applied this technology at an early stage in order to overcome the step that limits the throughput of the following workflow, which is the mass generation of embryoid bodies. Instead of letting individual embryoid bodies form through self-aggregating in 96-well plates and later manually encapsulating them into separated Matrigel droplets, we incorporated microfluidics technology on day 0 to make hiPSC droplets that packaged a certain amount of stem cells into a Matrigel sphere directly. This produced a close proximity of a cluster of stem cells which would later integrate with each other and form embryoid bodies inside the ECM droplets. The embryoid bodies then formed and grew inside the droplet throughout the process of induction and differentiation, before entering the maturation stage to fully differentiate into cerebral organoids (mini brains) after day 40 (Figure 1.A). 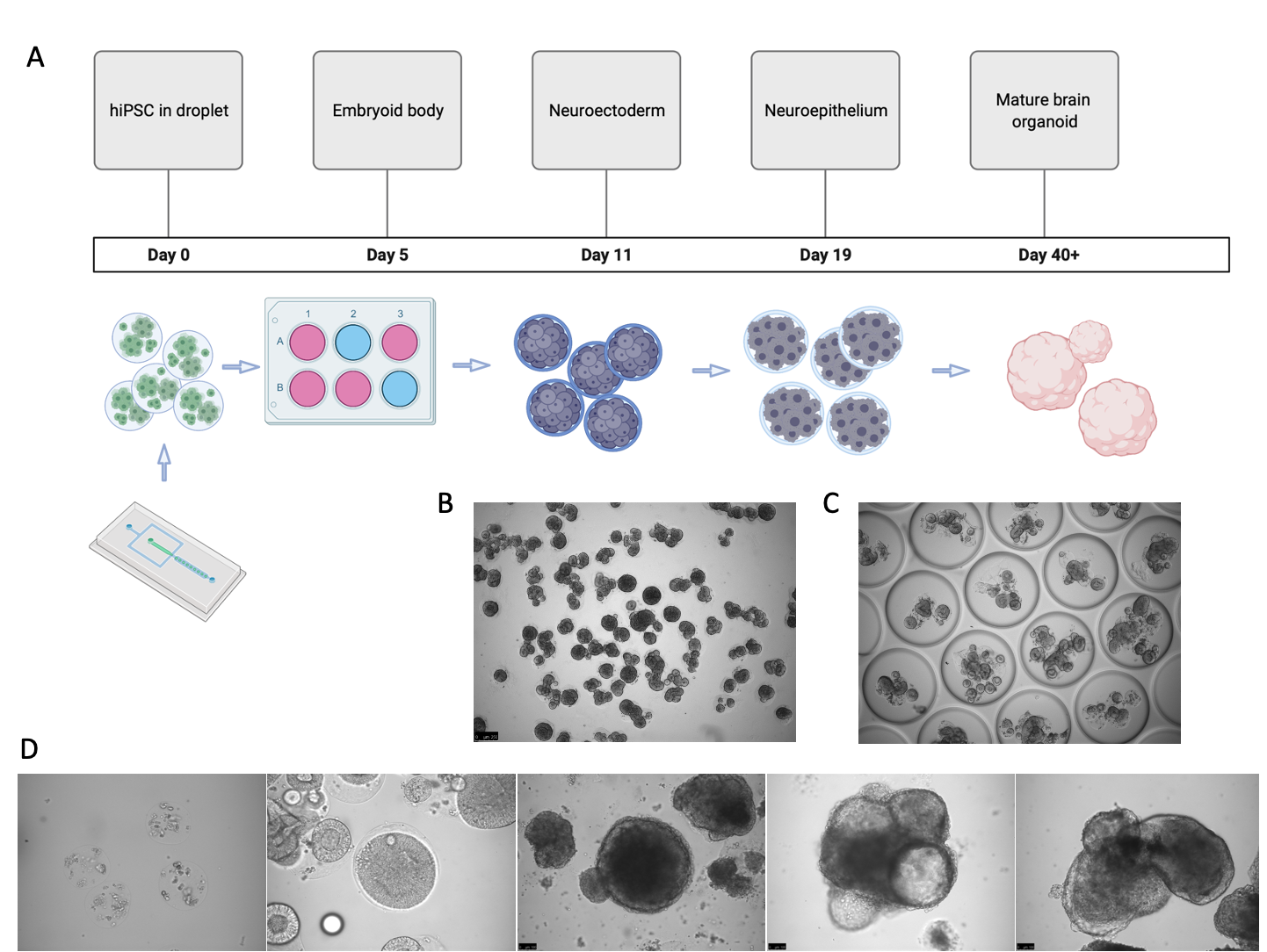 By pre-packaging the stem cells into Matrigel droplets, we were able to generate hundreds to thousands of embryoid bodies in one cohort (Fig. 1.B), control homogeneity of the embryoid bodies using extrinsic regulations such as microwell plates (Fig. 1.C), and reduced much time and labor needed later in the process by the original protocol. The mini brains generated from droplets recapitulated all the crucial stages in cerebral organoid differentiation process (Figure 1.D), including embryoid bodies, neuroectoderm- and neuroepithelium-like structures, and cerebral tissues. The organoids matured at around day 40-50, exhibited complex, heterogeneous tissue characteristics, and can be kept alive indefinitely under proper maintenance with the earliest cohort still in culture was from January (Supplemental image 1). 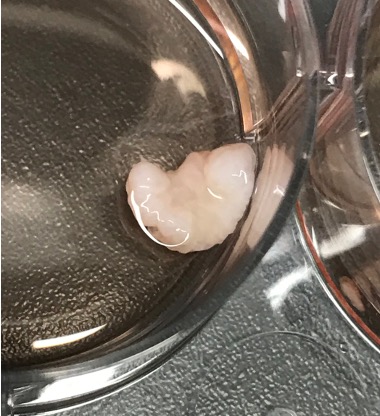 Supplemental figure 1. A photo of a mini brain that has been in culture since January. For a size reference, this organoid is in a 6 well plate, which has a diameter of around 40mm.

Previous literature indicated that cerebral organoids could recapitulate different brain regions and structures of human brain anatomy (Lancaster et al). To examine the gross morphology of our droplet-based mini brains, immunohistochemical staining was performed on a 7-month-old mature mini brain in an effort to observe the existence of forebrain, midbrain and hindbrain markers. 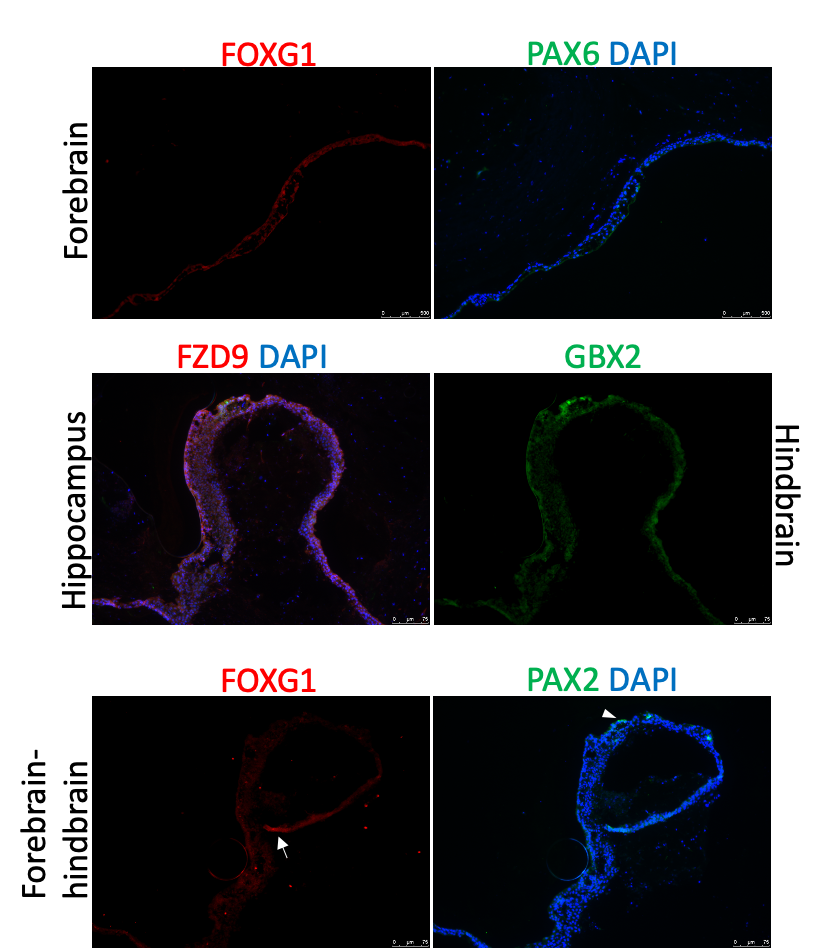 We examined if the mini brains generated using the microfluidics system have a quality comparable to those generated with the conventional method. Immunofluorescent staining with general neuronal marker TUJ1, forebrain progenitor marker PAX6 and general progenitor marker SOX2 revealed that the organoids generated with the two different methods had similar cell subtypes and the cells were morphologically arranged in a similar way (Fig. 3).

In particular, the droplet method seemed to have a smaller SOX2 positive progenitor population, and that might be due to the longer maturation period the organoids underwent, causing the progenitors to become partial or fully differentiated. Mature neuron activities and excitable neuron electrophysiology are yet to be determined.

Below, we discuss the comparison macroscopically between the conventional and droplet-based methods. For the conventional method, we strictly followed the protocol accompanying commercially available cerebral organoid cultivation kits, and had a droplet-based group that was started on the same day as a comparison counterpart. Equal amounts of cells were harvested for the generation of embryoid bodies on day 0. Morphologically, the mini brains generated from droplets versus conventional methods displayed similar tissue development timeline and patterns (Fig.4), while conferring a high throughput. 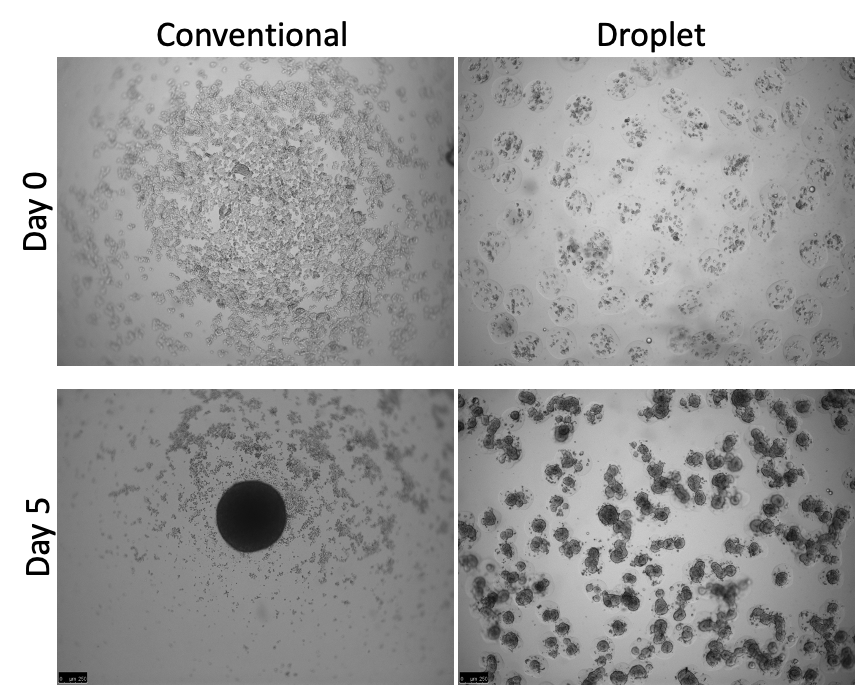 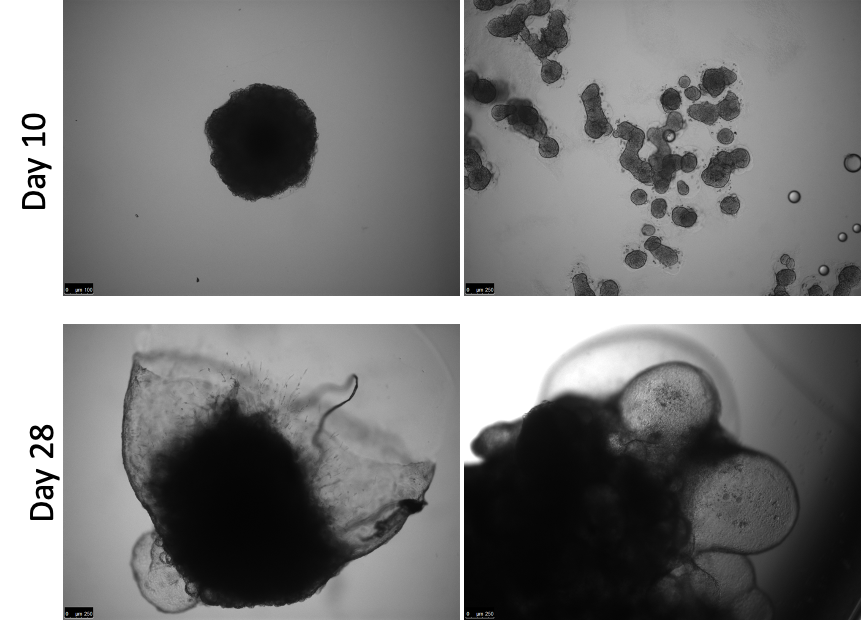 Figure 4. Comparison between the two methods of generating cerebral organoids. Note that the larger diameter of the organoids in the conventional method was due to a larger starting number of iPS cells seeded compared to the droplet method, but this did not seem to influence the quality of the mini brains produced.

We noticed that there was a large percentage lost with the conventional method due to embryoid body/organoid fusion and handling errors that damaged embryoid bodies. Out of the 40 embryoid bodies we seeded, only around 10 individual mini brains were able to mature and develop. The droplet method, although seeing some fusion events too, had more embryoid bodies to start with and therefore yielded more mini brains. Additionally, we observed that the droplets fused into large aggregates in each well after an extensive period of time (2 weeks) of the orbital shaker. We therefore argue that the usage of an orbital shaker or a bioreactor would not be required for our droplet-based mini brains. Quantification of the percentage loss caused by organoid fusion events is yet to be determined.

The mini brains generated using our method can be co-cultured with patient-derived glioma cell lines to yield meaningful responses in an in vitro environment. To verify the presence of cell interactions between the normal brain organoid cells and the glioma cell population, a co-culture experiment was conducted and the results indicated an invasion event upon seeding the brain organoids with glioma cells (the results can be found on Proof of Concept page). Further, we tested 3 verified, common chemotherapy drugs with the same system and documented growth and killing over the course of 3 days, and a statistical analysis was performed to generate the kill curve based on fluorescent intensity (results on proof of concept page). This demonstrated that our co-culture system can successfully model the predicted drug responses as an in vitro system and have potential clinical applications.

Although the results look promising, there are some aspects that we would like to improve in our future protocol. Most importantly, EB quality needs to be enhanced to form more compact and denser organoids with a higher starting cell number. Further, fusion events between the mini brains need to be prevented to increase the through-put of the system. Finally, we expect to use our mini brains together with a glioma line with the constitutive reporter system installed to establish a high throughput drug testing platform. As a proof of concept that a co-culture system would sustain glioma cell growth, a co-culture experiment had been done with a GFP-labeled glioma cell line D425-GFP; a drug assay had been done using the same co-culture system and the results were analyzed using fluorescent data. The goal of the next phase of the project would be integrating mini brains with a glioma line with reporters built in.