To complement our tumor-minibrain co-culture platform, we designed and constructed a model, combining Michaelis-Menten kinetics, Hill cooperativity, and parametric analysis, to simulate our D-2-HG oncometabolite reporter system. In implementing our model, we aim use our findings to inform our engineering in the lab, specifically answering two questions:

The D-2-HG oncometabolite reporter system in NODES is a two component system. The first component (BBa_K4046000 constitutively expresses the allosteric transcriptional regulator DhdR. The second component BBa_K4046990 is the reporter with a strong promoter and dhdO binding sites that responds to DhdR repression. We model the two systems separately at first, gathering variables involved in the mechanism and then creating a differential model for each component of the system. Using the developed model, we extracted quantitative metrics, including the Hill coefficient which provides the answer to our proposed questions. The model results will inform and drive decisions in system iterations in Phase II of our project.

RNA polymerase first binds to the promoter. This is modelled by the chemical equation and the corresponding mathematical equation:

Once bound, the RNA polymerase initiates mRNA formation. This is modelled by the chemical equation and the corresponding mathematical equation:

is the initial plasmid DNA copy number. \(k_{MRNA}\) is the rate of elongation of RNA polymerase.

The produced mRNA then undergoes translation by ribosomes. Translation is initiated by ribosome binding, which can be modelled by the chemical equation and the corresponding mathematical equation:

Once bound, the ribosome initiates protein formation. This is modelled by the chemical equation and the corresponding mathematical equation:

DhdR is constitutively produced. Utilizing the methods derived above, this circuit can an be modeled by the transcription and translation equations:

Combining the expression of DhdR with dimerization calculations, we obtain:

We assume that because DhdR is stable under a dimerized state, it binds to the dhdO operator site as a dimer. Thus, when DhdR_2 is not present, the reporter circuit is activated and the signal is expressed.

However, because of constitutive expression, DhdR2 binds to the dhdO binding site and allosterically blocks the transcription of the reporter. This is modeled by the equations:

We know that the rate of transcription is proportional to the concentration of free operator sites, so:

Factoring in decay, we obtain:

We can then model translation by:

After factoring in repression of DhdR and obtaining the rate of reporter mRNA and protein expression, we consider how other variables in the system change over time. The variables include \([D_2], [H], [D_2H], [O], [D_2O]\).

When present, D-2-HG binds to DhdR, releasing it from the binding site and therefore inhibiting DhdR repression. Under this state, D-2-HG could bind unbounded or bounded DhdR2. This two case process is modelled by the chemical formulas:

Combining the two cases and factoring decay rate, we obtain:

Since D-2-HG levels are elevated due to the IDH1 mutation in some gliomas, we expect that there will be an increase in fluorescence or luminescence due to the release of the allosteric transcription factor caused by the binding of the upregulated oncometabolite. D-2-HG changes over time can be modelled by:

\(k_H\)represents the rate of accumulation of D-2-HG overtime in the human body.

Factoring both bound and unbound DhdR and decay, we can obtain \([D_2O]\) through:

Likewise, the [O] can be obtained similarly through:

Lastly, summing all the above information, we can observe changes in DhdR dimer as a whole through the equation:

When we perform drug screening assays on our completed co-culture system, we will associate decreased fluorescence or luminescence with lower levels of D-2-HG, corresponding to reduced tumor growth.

In the case of circuits with multiple binding sites for repressors, we model the system as a NOR gate. This NOR gate can be represented by the expression $$reporter = NOT(dhdO_1 OR dhdO_2)$$.

In the scenario with two dhdO binding sites, both repressors need to be absent for the promoter to be fully active. In addition, the binding reactions to dhdO sites are independent, so the chemical and mathematical equations previously derived still hold. With this in mind, the transcriptional equation for a generalized system with n repressor binding sites would be:

In Python, we utilized the Numpy and Scipy library and implemented the forward Euler’s method to compute our simulation. Each component of the system was computed throughout a fixed time step for 11 hours in 1 second increments.

From aggregating the reporter expression trends at each initial 2HG level, a Hill curve was constructed for one, two, three- binding site cases. In order to closely monitor the reporter-D-2-HG relationship and identify an inflection point — a clinically relevant threshold value that signifies IDH-1 mutation —  a parametric sweep with initial 2HG values starting from \(10^{-4}M\) to \(0.035M\) in \(3.5*10^{-4}M\)  increments were performed.

From the hill curves, we observe that the reporter-D-2-HG relationship becomes less steep with increasing binding sites. After the initial increase, reporter expression plateaus at the maximum, and this value is consistent for all binding site cases. 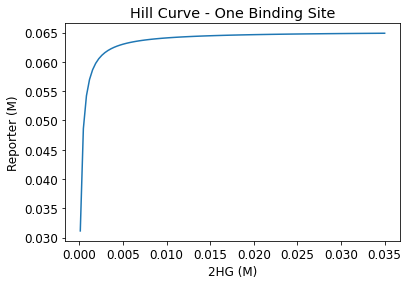 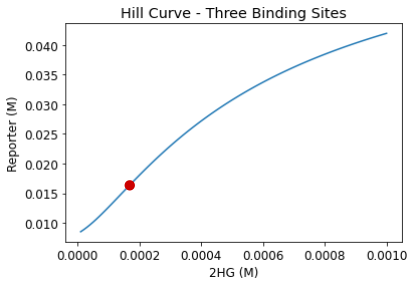 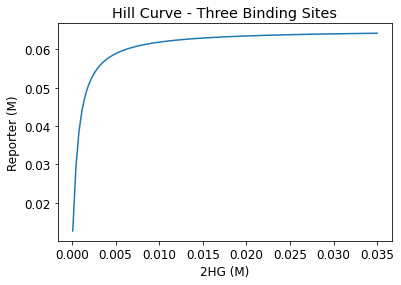 Figure 5. Hill curves for one, two, and three-binding sites

The inflection point in the three binding site Hill curve occurs at around 0.0002 M (Figure 6). This inflection point is our predicted reporter activation D-2-HG threshold. From literature, we found that glioma patients with IDH1 mutation typically have D-2-HG levels of around 0.005 M. (Andronesi et al., 2012). Thus, to implement our system in phase II and tailor the reporter for IDH1-specific drug screening, we plan to raise this reporter activation threshold to match that of glioma patient’s D-2-HG concentration level at the 0.005 M. Once this change is implemented, our circuit will have the capability of modulating reporter expression depending on whether D-2-HG is at dangerous levels or not. An example modification we are looking to implement in phase II is the fine-tuning of our promoters. 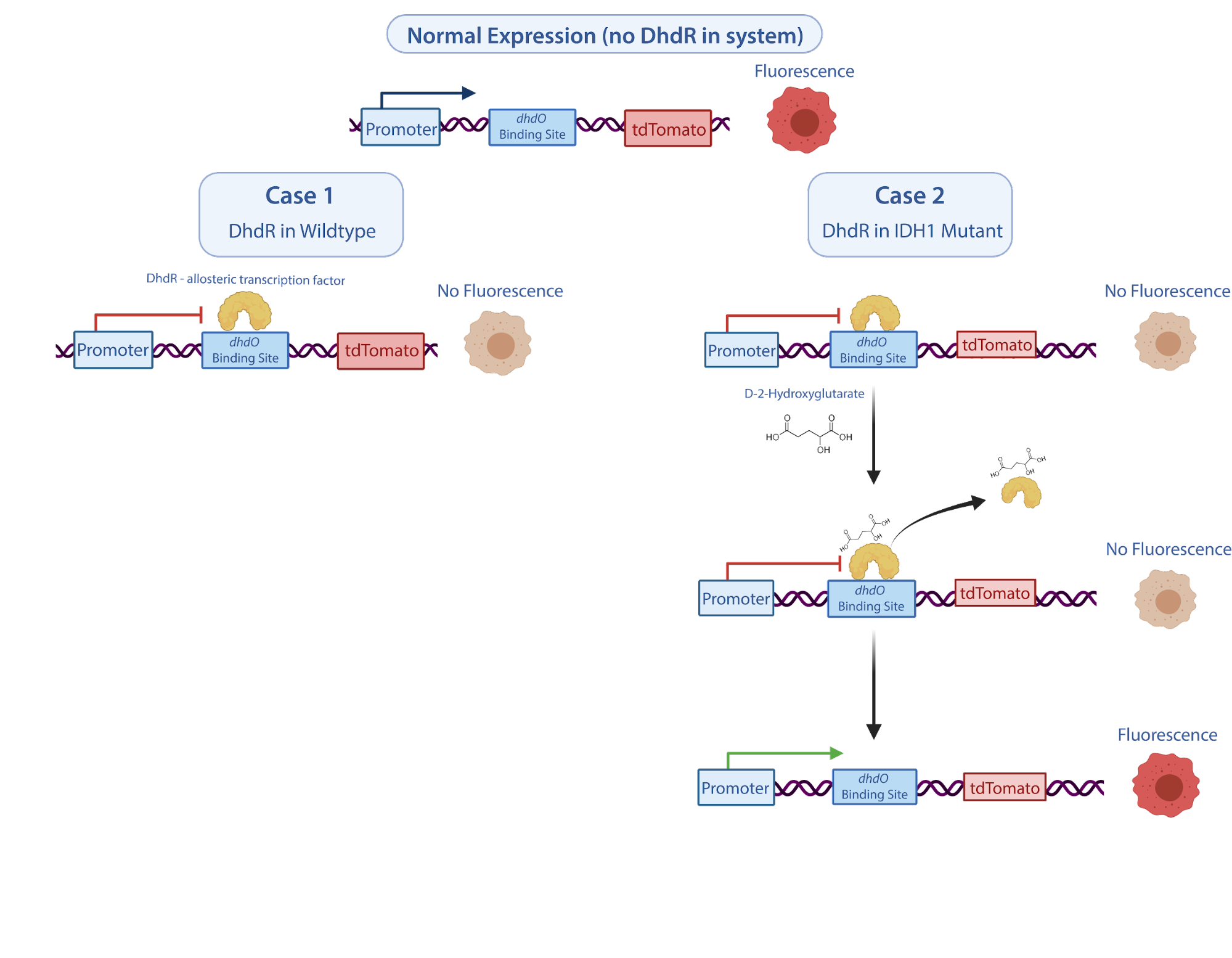 While the numerical estimates could be further improved to better simulate the genetic system, our model showed that it is possible to predict circuit behaviors without complete information about the mechanism and constants involved. As with other fields of research, because a multitude of cancer growth variables, complex oncometabolite interactions, and related genetic parts are still uncharacterized, predictive models that are able to simulate these uncertainties and flexibilities will be immensely vital in guiding system designs in these fields.

For phase II of our project, we plan to build on our deterministic model and implement a stochastic model. Stochastic models account for variability and volatility in a system by allowing for randomness and implementing probability estimations. In particular, we look to simulate our circuit using Markov models. In addition, we plan to reverse engineer the deterministic model by fitting the data obtained from our experimental results to better understand unknowns in the deterministic model. If implemented, our composite findings from both models will be tremendously informative in guiding the engineering of our reporter system and advance drug screening for glioma patients.