Our goal is to create a mutation-specific high-throughput glioma drug screening platform. To reach this goal, culminating in the development of NODES, we followed an iterative engineering design cycle: 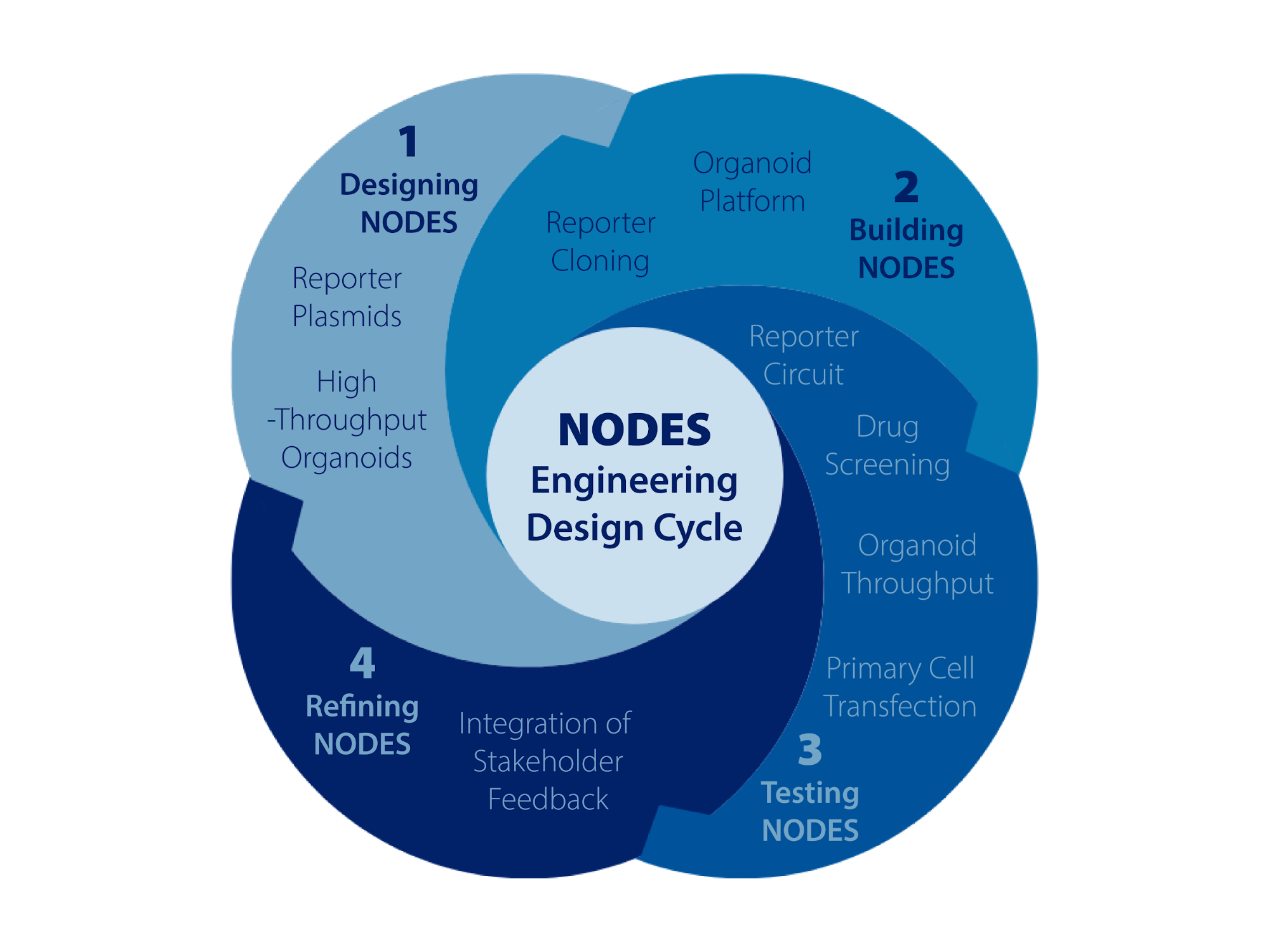 Our engineering design cycle is driven by data from testing and stakeholder feedback to allow for effective iteration and prototyping. Key sections from the Design, Results (Cloning, Minibrain), Proof of Concept, and Human Practice pages are included in this page to showcase how we integrated all aspects of our work within an engineering design process.

While researching potential biosensors for D-2-HG, we found a Biorxiv article by Xiao et al. outlining the discovery of an allosteric transcription factor, DhdR, from Achromobacter denitrificans NBRC 15125, which negatively regulates D-2-HG dehydrogenase expression in response to D-2-HG. This article was the foundation of our reporter system. We ordered the human-codon optimized DhdR gene from Twist Bioscience, and inserted it into a commercially available pcDNA5 plasmid (Thermo Fischer, V103320) to serve as our biosensor.

Our reporter constructs consist of dhdO binding sites and a fluorescent (tdTomato) or luminescent (CLuc) reporter gene. Xiao et al. included a series of dhdO binding sites sequences and their KD dissociation constants, which reflect their binding affinities to DhdR. The authors tested 14 different binding site sequences, but our team decided to focus on the two with the lowest KD, dhdO 0# and dhdO 5# (Figure 1). After choosing these two binding site sequences, we designed ten binding site combinations with varying numbers of repeats and spacer sequences, which were all obtained from Integrated DNA Technology. The motivation behind this was to optimize the binding of our system, with the hopes of creating a tunable reporter or a cooperative binding that enhances reporter activity. The presence of binding sites and variations in the number of repeats can impact the binding behavior of associated proteins. Thus, our team hopes to test the ten binding site combinations to determine which variation offers the largest dynamic range of expressions, as this would allow our system to effectively serve as a biosensor for the compound of interest, D-2-HG.

Figure 1. Optimization of the D-2-HG biosensor from “A D-2-hydroxyglutarate biosensor based on specific transcriptional regulator DhdR” (Xiao et al., 2021)

In a wild-type environment, without the presence of DhdR, we expect normal expression of the fluorescent or luminescent protein. However, when DhdR is present, it will bind to the dhdO binding site, allosterically blocking the transcription of our reporter gene. When D-2-HG is elevated, as observed in IDH1 mutant cells, it binds to DhdR, releasing it from the dhdO binding site. This allows for transcription of the downstream reporter protein sequence, resulting in brighter expression that is visible in our in vivo droplet system (Figure 2). Since D-2-HG levels are elevated due to the IDH1 mutation, we expect an increase in fluorescence or luminescence due to the release of the DhdR caused by the binding of the upregulated oncometabolite. When we perform drug screening assays on our completed co-culture system, we will associate decreased fluorescence or luminescence with lower levels of D-2-HG, corresponding to reduced tumor growth. 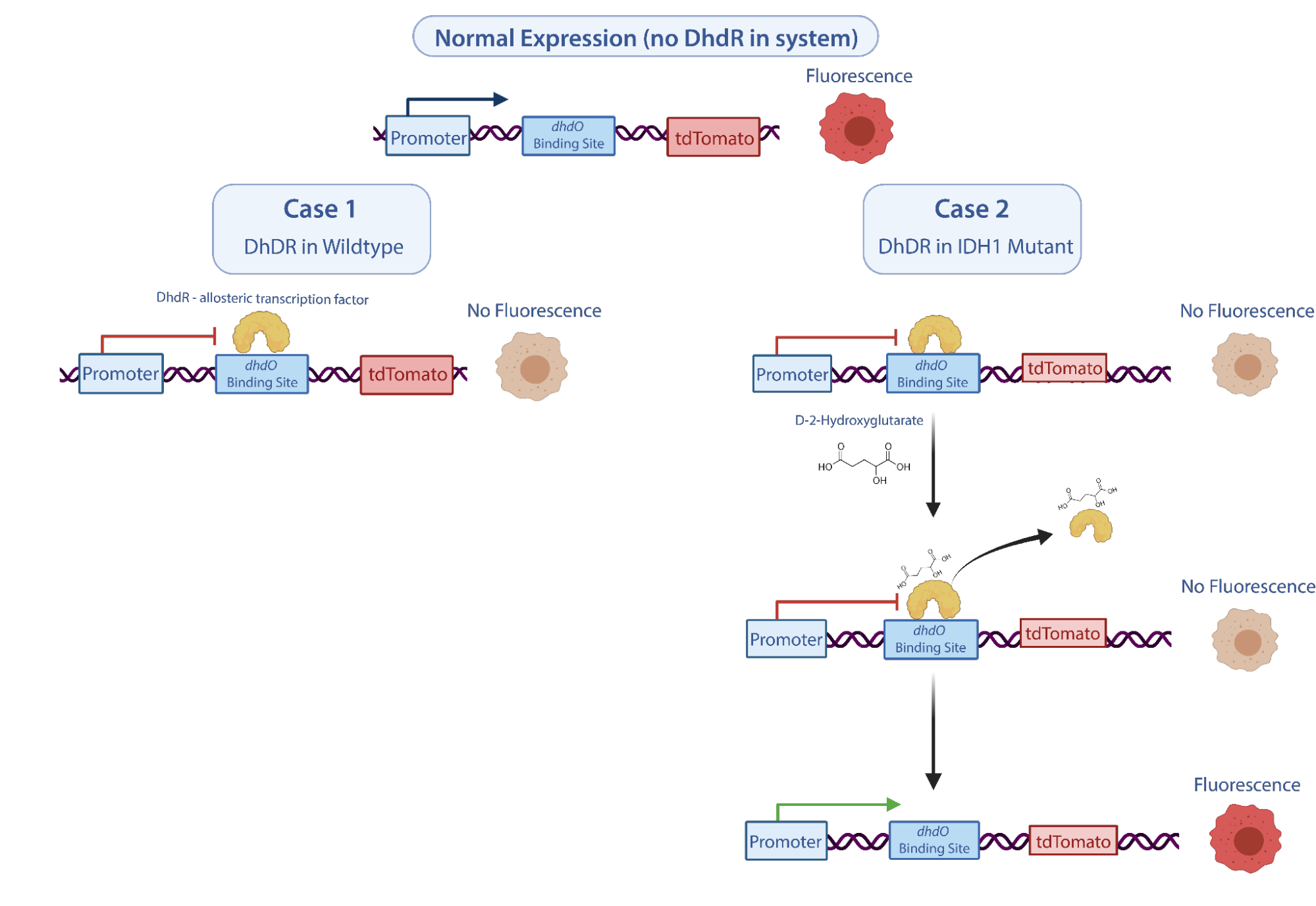 Figure 2. This figure outlines the mechanism of the interaction between the DhdR allosteric transcription factor and the dhdO binding site. The top of the figure outlines normal expression of the reporter sequence, resulting in fluorescing cells. Case 1 is the wildtype condition with no D-2-HG in the system. No fluorescence is expected in this case. Case 2 is the IDH1 mutant condition, when D-2-HG is upregulated. We expect fluorescence expression because of the interaction between D-2-HG and DhdR.

Microfluidics is an emerging field of technology that enhances the ability to handle very small volumes of fluid in an automatic and high-throughput manner. We capitalized on this new technology by applying it to the early stages of organoid development, which allowed us to overcome any previous barriers that hindered the mass generation of embryoid bodies. By using microfluidics to produce organoids encapsulated in droplets, we are able to improve upon traditional methods of generating cerebral organoids. These droplets significantly enhance the minibrain production rate, allowing for larger batch sizes and lower overall maintenance. This enables the development of high-throughput drug screening platforms that can test a multitude of drugs with the same cohort of cerebral organoids co-cultured with patient-derived glioma cell lines to reduce batch variability. Further, since the current cerebral organoid differentiation process heavily depends on the self-patterning of cell clusters, applying microfluidics technology can ensure consistency within one batch of minibrains by generating droplets containing small cell aggregates of a certain cell number. With the abovementioned advantages of the microfluidics system, this technology was incorporated into our design to generate a high-throughput organoid production pipeline (Figure 3). 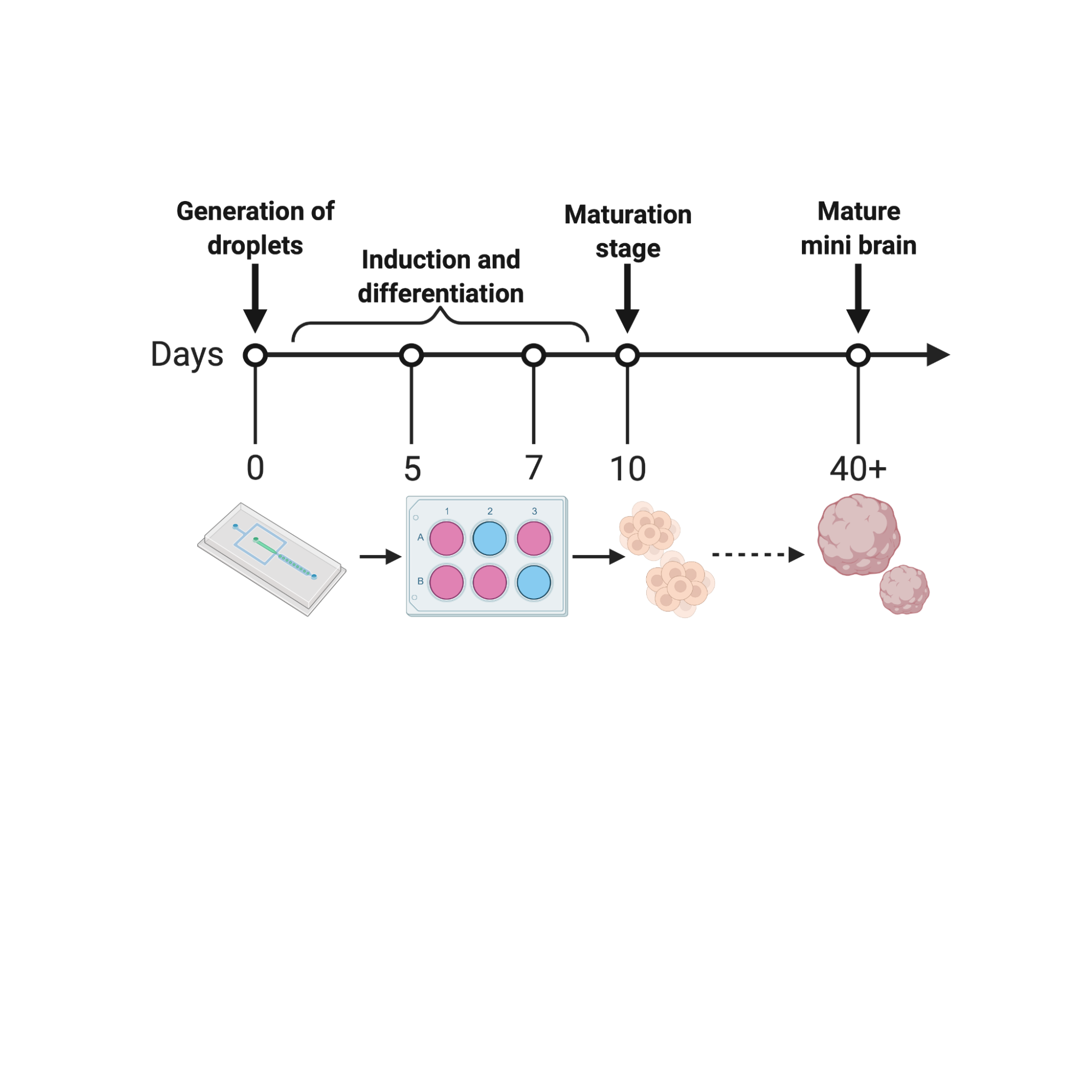 Figure 3. The timeline of the droplet-based mini brain workflow

To develop a high-throughput drug screening platform, we needed to determine methods of characterizing cell behavior without lysing our samples. We first selected reporter genes (tdTomato and CLuc) that encode fluorescent and luminescent proteins, respectively, that have the ability to induce visually identifiable responses. To establish the backbones for creating our overall reporter system constructs, the team designed four plasmids consisting of different promoter (CMV and hUBC) and reporter gene (tdTomato and CLuc) combinations (Figure 4). 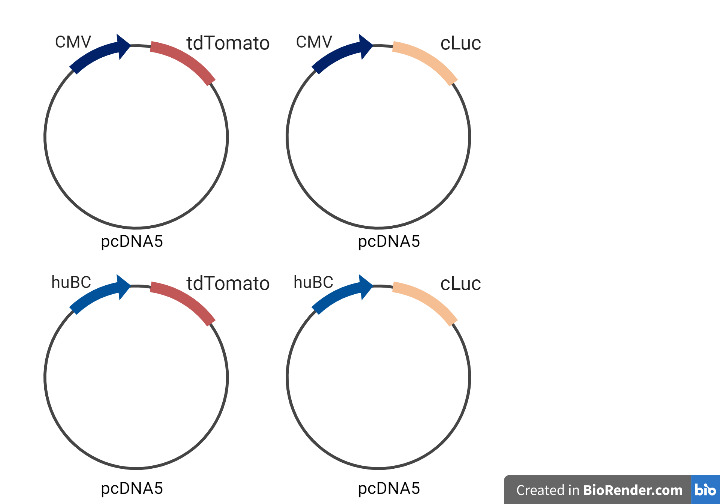 To construct the second component of our reporter system (the DhdR binding site constructs), we inserted ten variations of the binding site constructs into a commercially available pcDNA5 plasmid, which encodes for the red fluorescent protein mCherry. Based on our proposed system design, we then constructed a plasmid to express the allosteric transcription repressor DhdR. We have two versions of the construct with different nuclear localization sequence and FLAG tag placements (DhdR-NLS-FLAG vs. FLAG-NLS-DhdR) and will clone them into pcDNA5 plasmids to determine which sequence order allows for better protein expression (Figure 5). 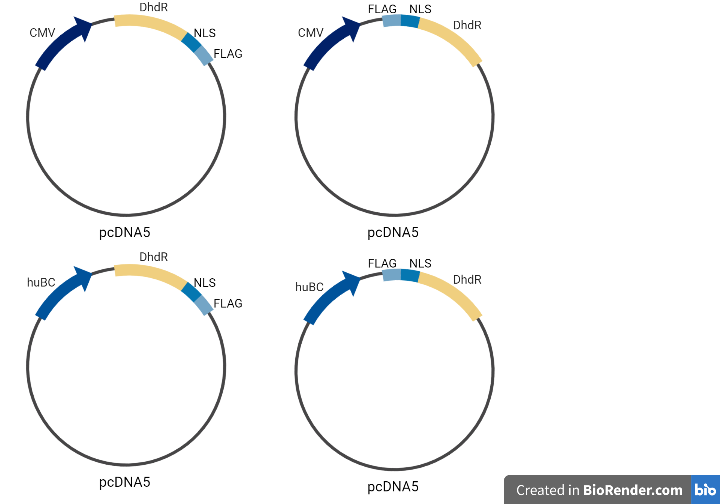 Current methods for generating cerebral organoids are labor-intensive and extremely time consuming, mainly due to the individualized handling of each of the mini brains in various steps such as transferring and encapsulating in extracellular matrix (ECM) dorms (for more details, see Design page. We refined the existing protocol for cultivating cerebral organoids (mini brains) to enhance its through-put and reduce the human labor needed by using the microfluidics system. Briefly, we incorporated microfluidics technology on day 0 to make hiPSC droplets that directly packaged a certain amount of stem cells into a Matrigel sphere. By pre-packaging the stem cells into Matrigel droplets, we were able to generate hundreds to thousands of embryoid bodies in one cohort and reduced much time and labor needed later in the process by the original protocol. The mini brains generated from the droplet-based method recapitulated all the crucial stages in cerebral organoid differentiation process including embryoid bodies, neuroectoderm- and neuroepithelium-like structures, and cerebral tissues. The mature organoids exhibited complex, heterogeneous tissue characteristics, and can be kept alive indefinitely under proper maintenance. From here, we are confident with the quality of our mini brains in regard to mimicking human brain microenvironment, and therefore will move onto testing the integration of our engineering products.

To verify the fluorescence gene expression of tdTomato, we transfected huBC-tdTomato into HEK293T cells, a widely used cell line, for initial validation of our construct. The cells were successfully transfected with moderate efficiency (~40%) and demonstrated fluorescence expression. The successful fluorescence expression of huBC-tdTomato in HEK293T cells validates that our construct can be used as an imaging marker for synthetic biology applications to characterize different cell behaviors, such as changes in D-2-HG (Figure 6).

Figure 6. Fluorescent microscopy verification of the expression of the huBC-tdTomato construct  in HEK293T cells.

To verify the CMV-CLuc and huBC-CLuc constructs, we transfected them into HEK293T cells and performed a luciferin-based luminescence assay. We added vargulin, a luciferin that releases light in the presence of a luciferase, to HEK 293T cells transfected with various amount of CMV-CLuc and hUBC-CLuc DNA (0 ng, 100 ng, 250 ng, and 500 ng). The HEK293T cells with no transfections had no fluorescence intensity. The fluorescence intensity was significantly greater in cells with CMV-CLuc (Figure 7, left) and huBC-CLuc (Figure 7, right) transfected compared to non-transfected cells, verifying that the two CLuc constitutive reporters we designed secreted luciferase enzymes. 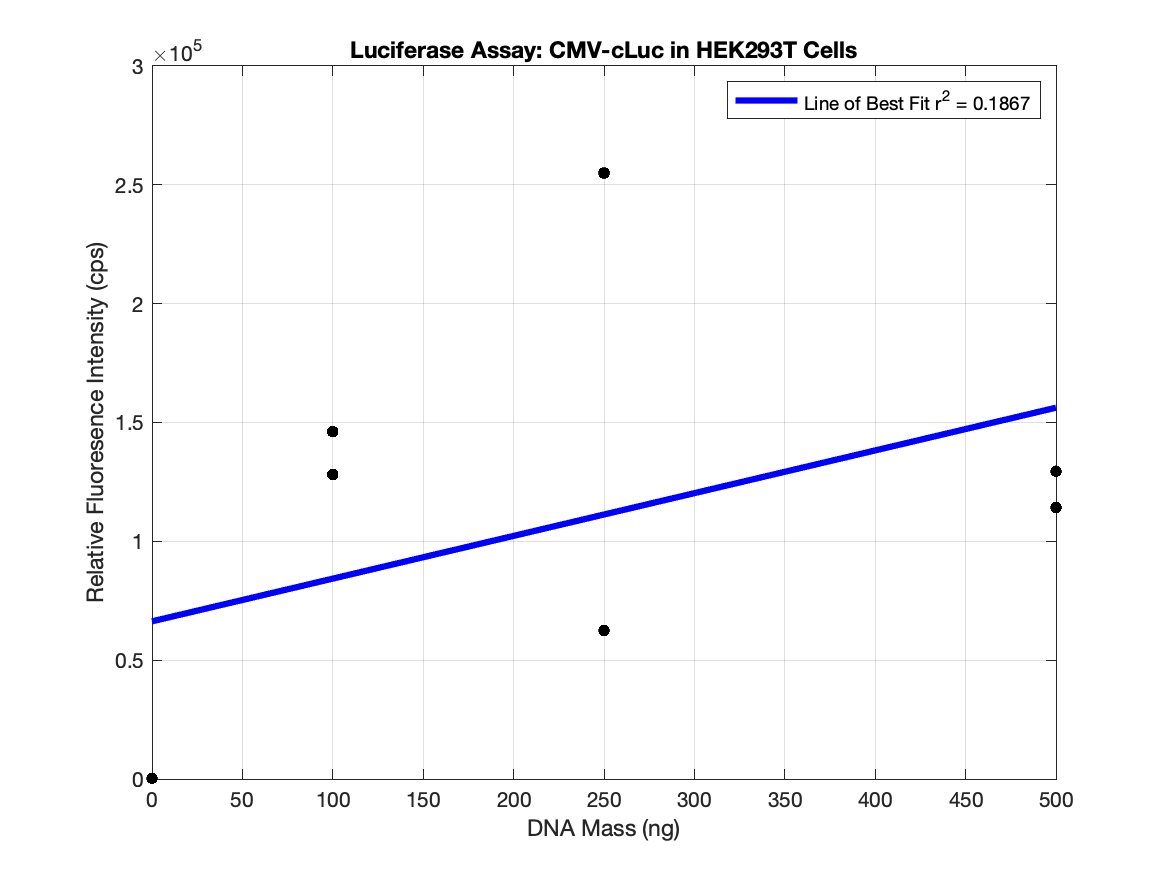 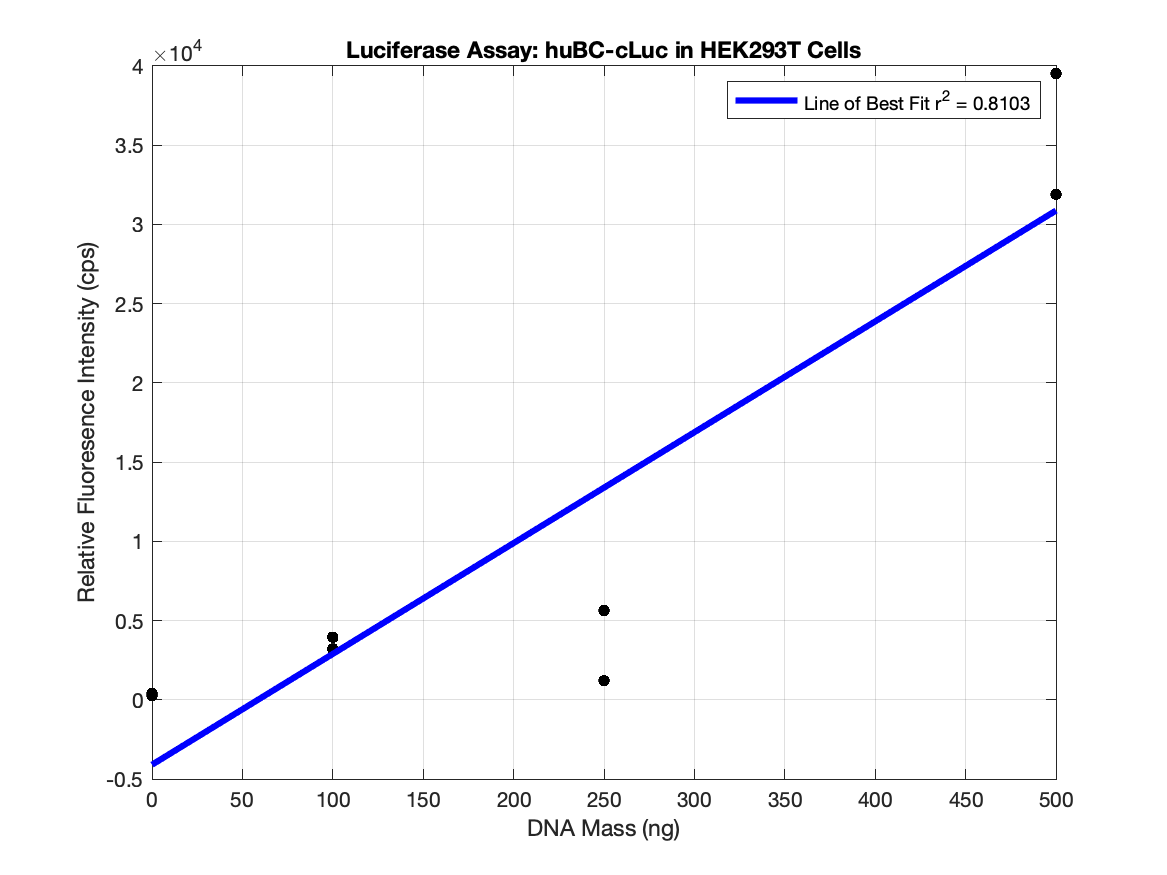 For more details of our verification process, see the Results page.

Although transfections are widely used to transfer plasmid DNA into common cell lines such as HEK 293T cells, plasmid transfections of glioma cells have not been well studied. Limited synthetic biology work has been performed on primary cells, including glioma cell lines and in organoid co-culture settings. From our lipofection and electroporation experiments, we concluded that the 250V condition had the best balance of transfection efficiency and fluorescence expression (Figure 8). For more details of our transfection testing process, see the Proof of Concept page. 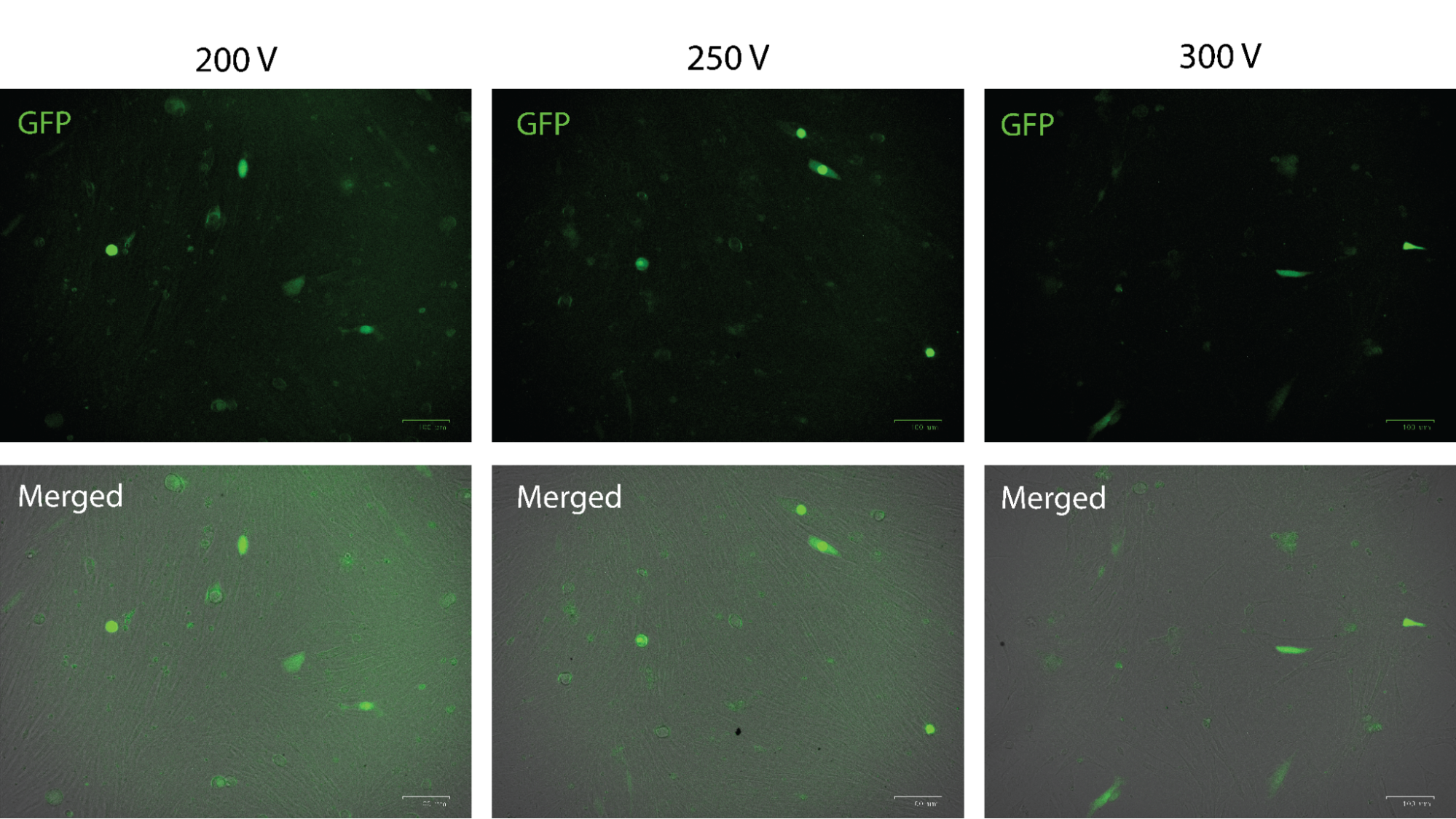 To test and demonstrate the robustness of the co-culture system, we set up a drug assay experiment that mimicked the process of testing drugs with patient-derived cell lines in a clinical setting. We used a patient-derived medulloblastoma cell line, D425-GFP, labeled with green fluorescent reporters. This line is known to be a fast-growing cancer cell line that is resistant to temozolomide (TMZ) at high doses. The drug assay using our co-culture system showed this trend as there were no significant differences in killing in two different TMZ doses (Figure 9). 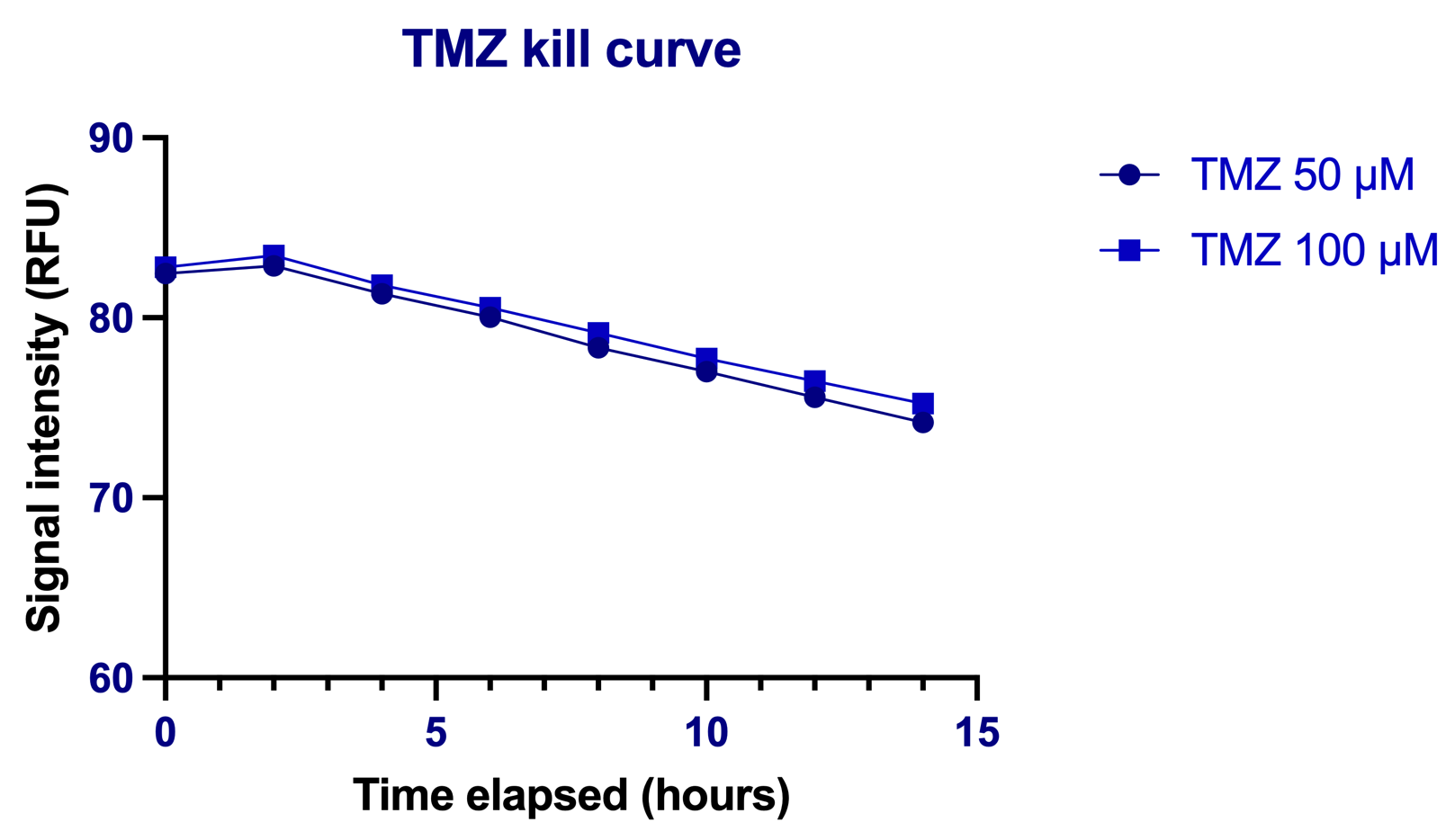 Figure 9. TMZ drug assay over the course of 14 hours. There were no significant differences between the two doses.

We tested another drug, medroxyprogesterone acetate (MPA), which has been confirmed to have potent killing effects on D425-GFP, to show that the co-culture system conferred the same results as in previous studies. The drug was verified in patient-derived xenograft (PDX) models and pre-established cell lines and has been shown to cause strong and fast killing of the D425 cell line. Our co-culture system confirmed this trend and had results that agreed with previously published data (Figure 10). 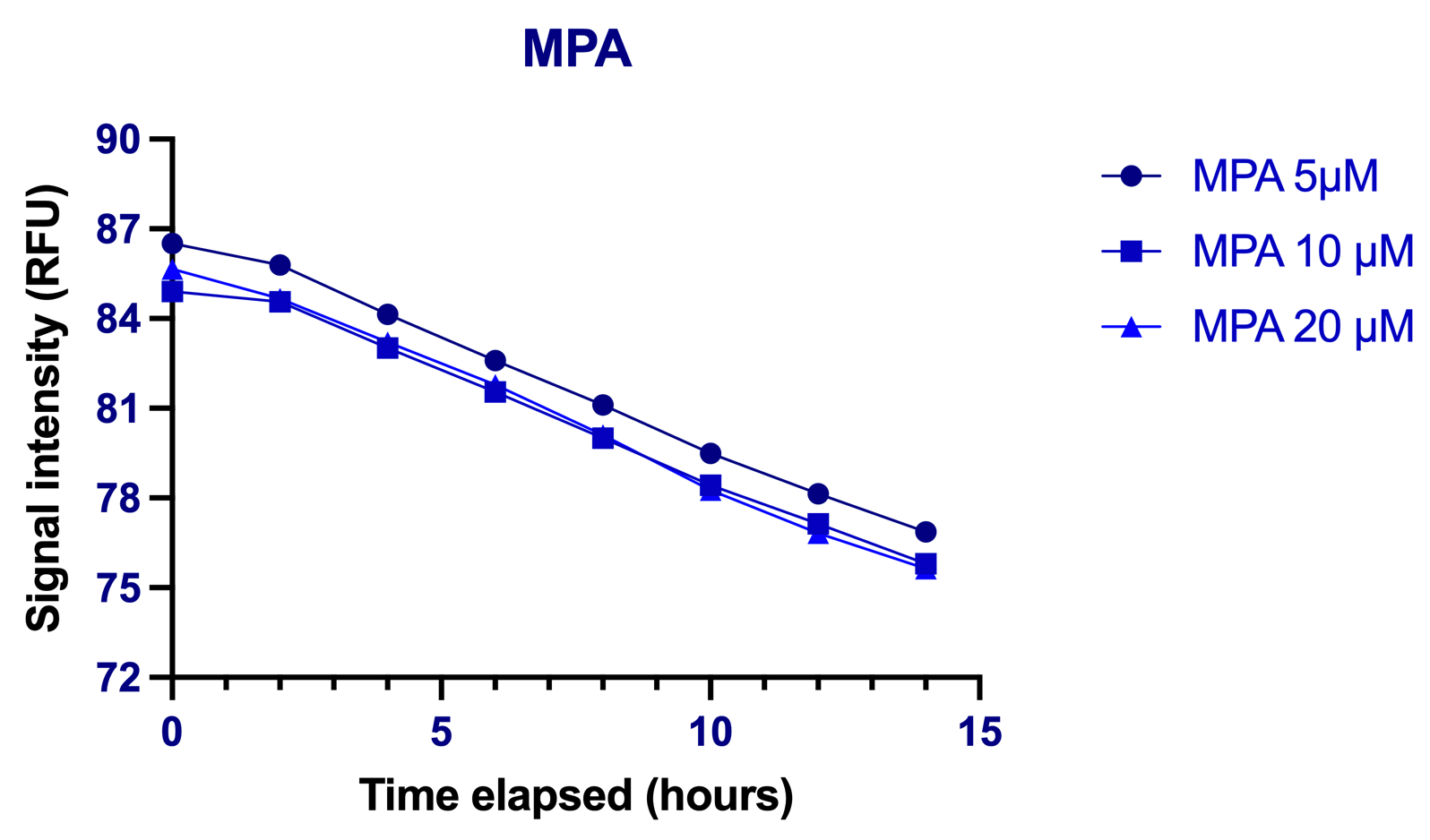 Figure 10. The comparison between the killing effect of MPA over the course of 14 hours. Note that the two higher concentrations had no obvious differences in killing. 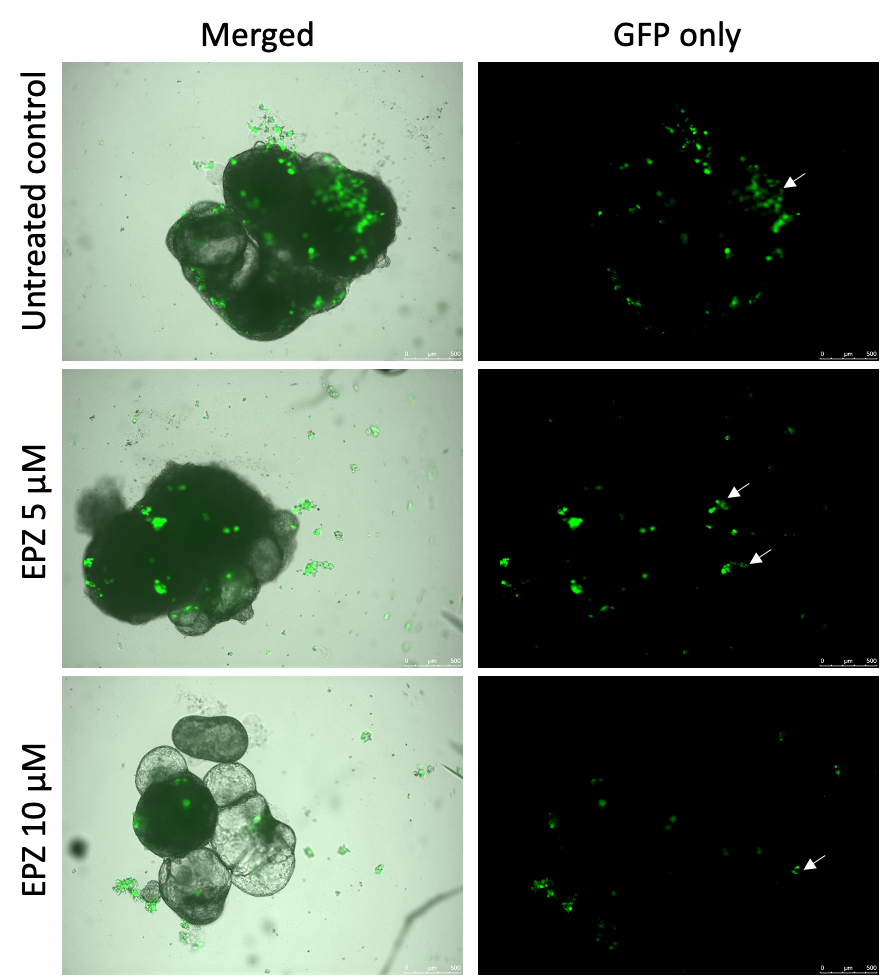 This demonstrated the functionality of our current co-culture platform, as it accurately recapitulated the differences between drug effects in varying doses and visually provided evidence that indicates inhibition of cancer cell migration. From this drug assay we conclude that there is a high likelihood that our co-culture system holds accurate predictive power in regard to forecasting drug responses in vivo, and have a potential application in clinical settings.

Despite being the most common malignant brain tumor, clinical treatment of glioma is severely limited by the lack of a scalable, physiologically-relevant model for testing therapeutics. To fully understand the implications of this problem, our team talked with researchers and individuals who work directly with patients to understand how our project scope should be refined to best address the needs of key stakeholders. 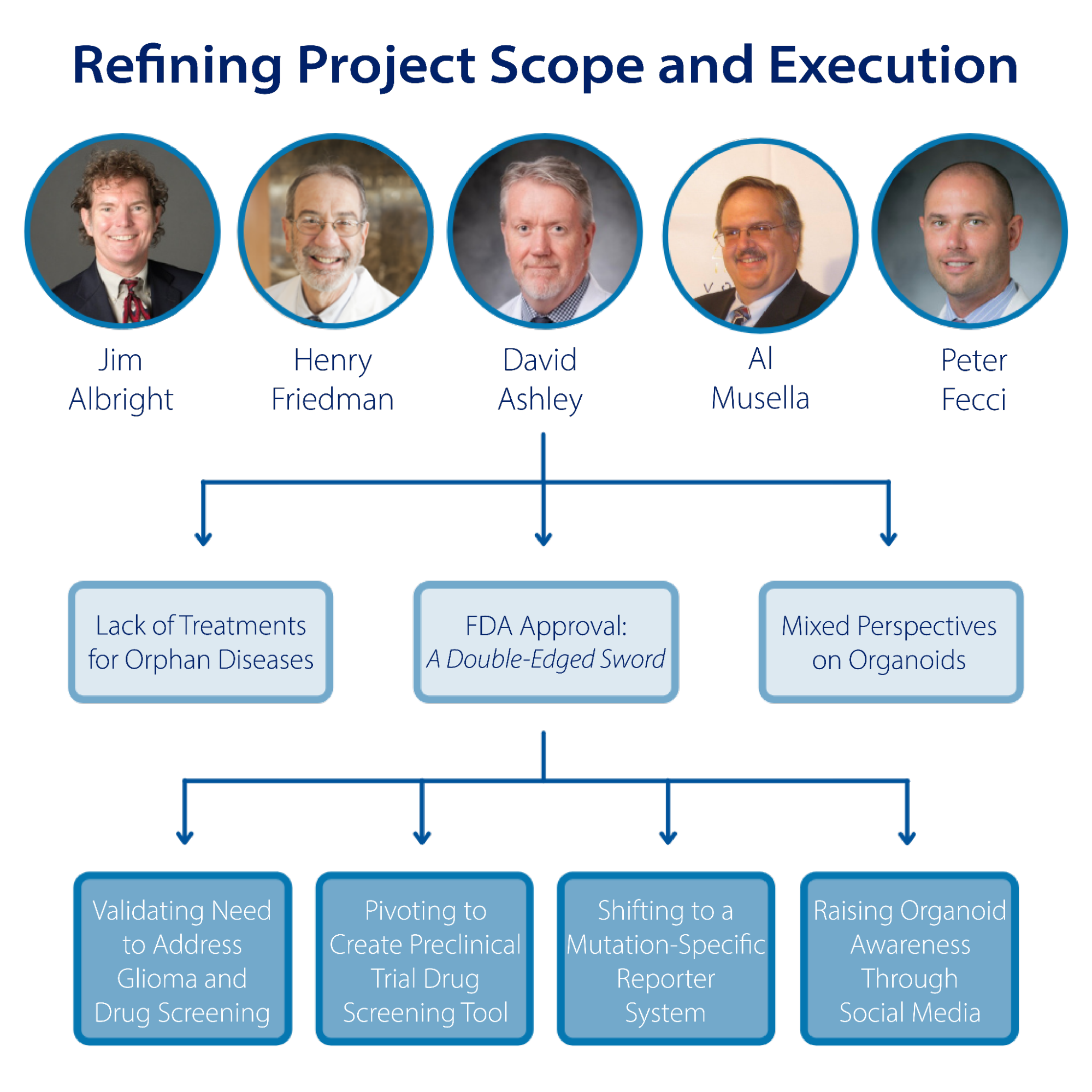