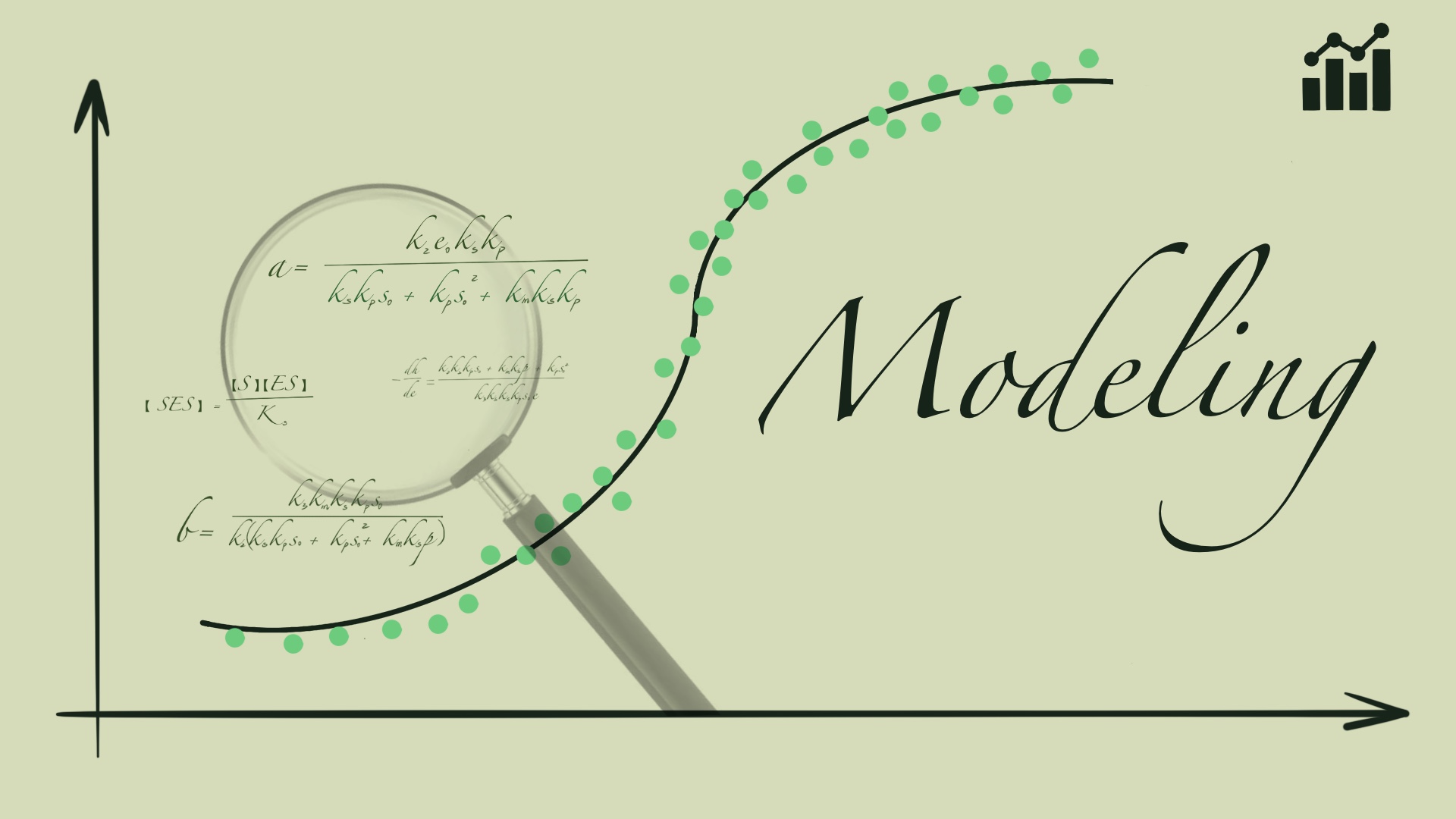 There is no doubt that one of the basic foundations of Tasting officers and seasoning formulation is to perform accurate, quantitative estimates and simulations. Generally, the way to do this includes accurate measurements and simulations using mathematical methods.


We refer to the related work of the 2017 BIT-China team and build on it to construct new mathematical models to quantify the protein concentration changes inside the Tasting officer, as well as to visualize and quantitatively represent the entire process of the detection officer from sensing the taste substance to presenting fluorescence. Based on the signaling model, we can demonstrate that it is theoretically feasible to conduct experiments and construct Tasting officer in this effort.


By fitting and predicting the growth of laboratory-cultured Saccharomyces cerevisiae with reference to the related work of the 2017 BIT-China team, we obtained a model for the growth of engineering bacteria during the measurement process, which will help us to predict the relationship of fluorescence intensity that may be reflected by the Tasting Officer in practical applications from a macroscopic perspective.


We derived the relationship between the degree of protein hydrolysis and the properties of hydrolytic enzymes and proteins from the mechanistic level of enzymatic reaction, and established a protein enzymatic model to predict the optimal reaction time and substrate concentration for proteins to reach a certain degree of hydrolysis, which will be useful for guiding our production of our Creative Food Seasonings.


We developed the model with two main aims in mind:

The model was built based on the signaling pathway in Saccharomyces cerevisiae cells, and the mechanism was modified according to the modification of Saccharomyces cerevisiae in the wet lab. In this model we mainly focus on the concentration changes of proteins in the signaling pathway, construct a set of ODE equation models, and use MATLAB computing platform to solve them. The model can visually reflect the change pattern of fluorescence intensity produced by an engineering bacterium after sensing the taste-presenting substances. 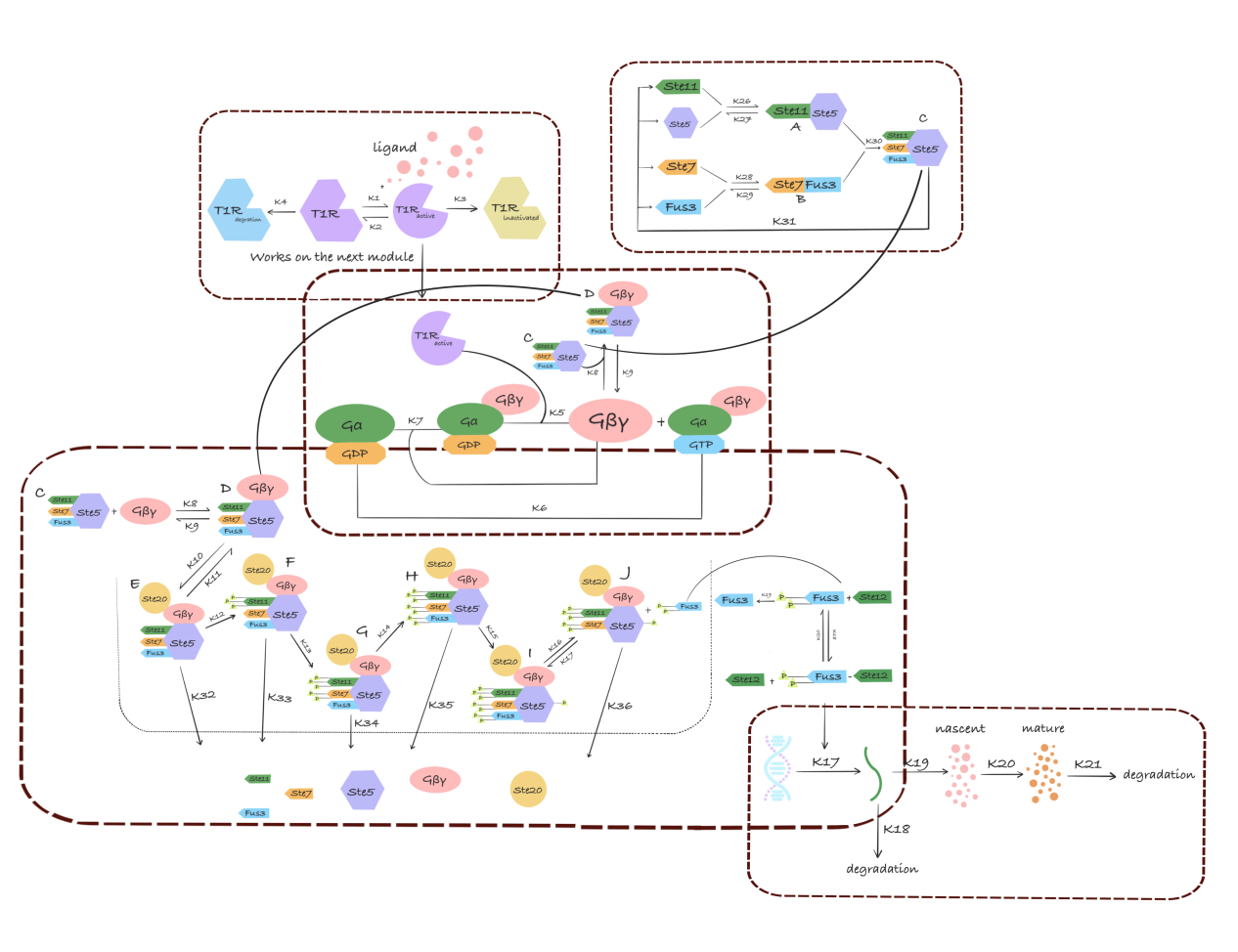 Activation of the Receptor 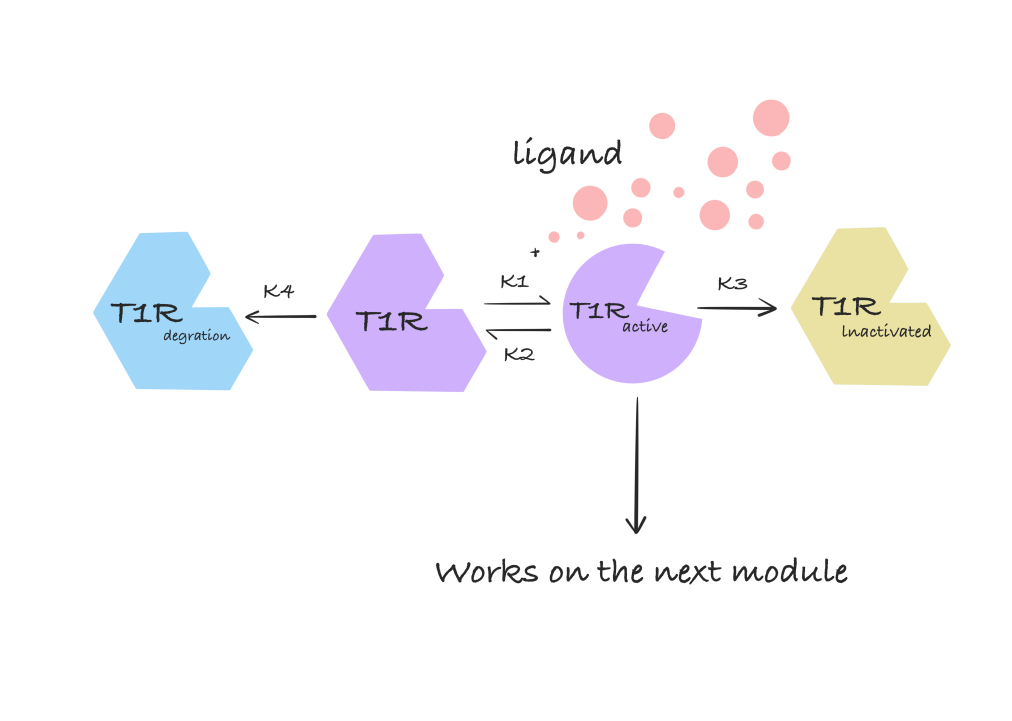 The equation for this process is shown below:

The parameters of the process are listed in the following table.

The result of T1R receptor activation is shown in the figure below, where it can be seen that the receptor is activated in response to binding the ligand. 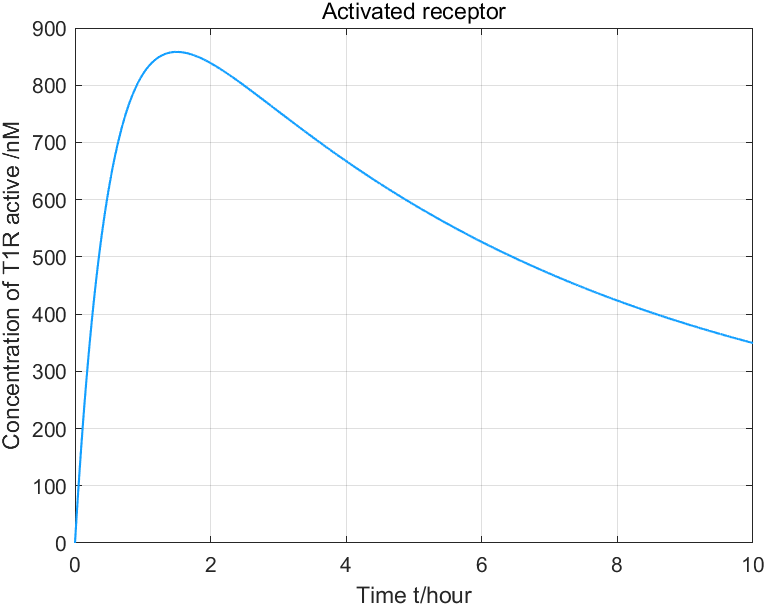 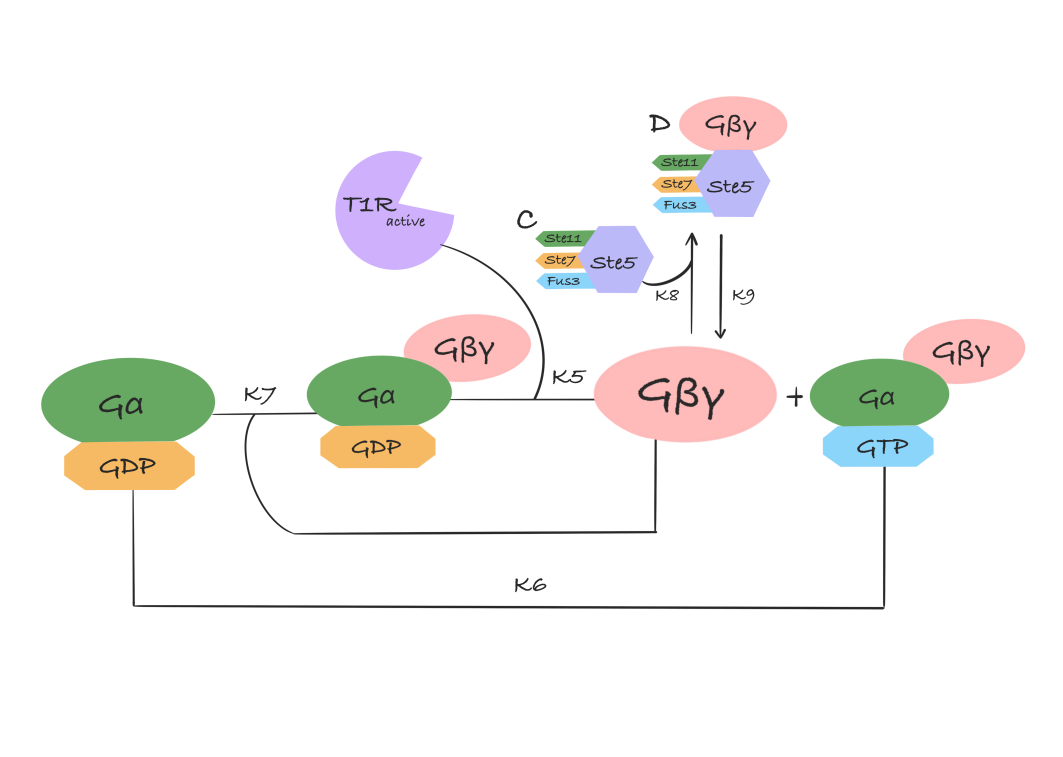 Activated taste receptors first turn on the G-protein cycle, and the activated G-protein cycle produces proteins Gβγ that will activate the next module of the response.
The equation of the process is shown below.

The parameters of the process are listed in the following table.

The signal output curve after G protein cycle activation is shown below, and our model can convert the signal transmitted by receptor activation with basic accuracy. 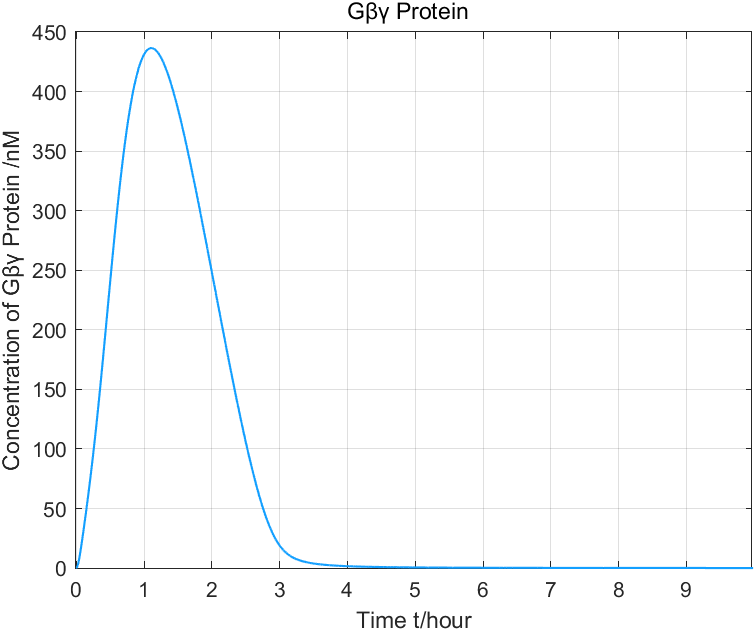 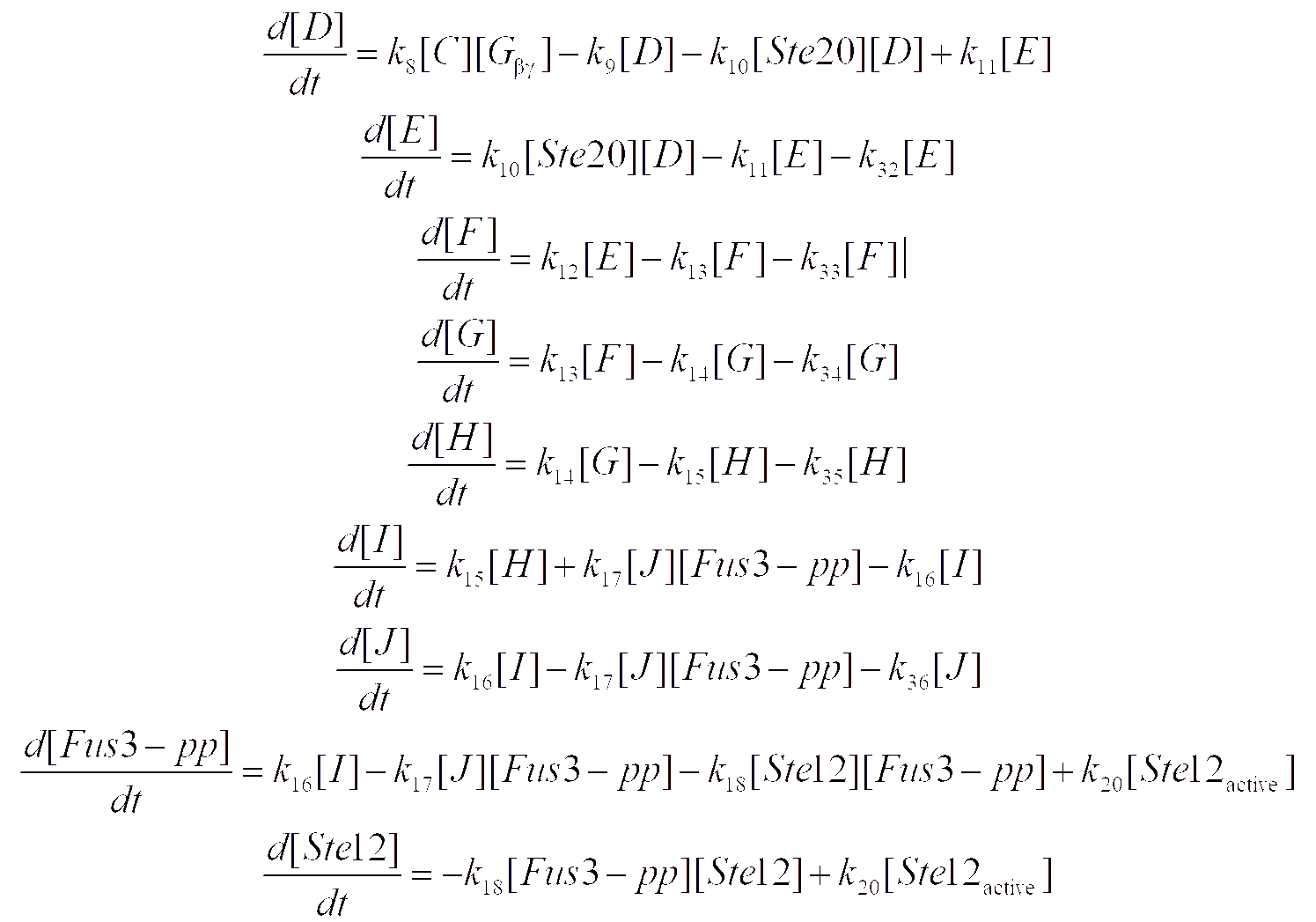 The parameters involved in the process are listed in the following table:

The results of the MAPK pathway output signal are shown in the following figure. 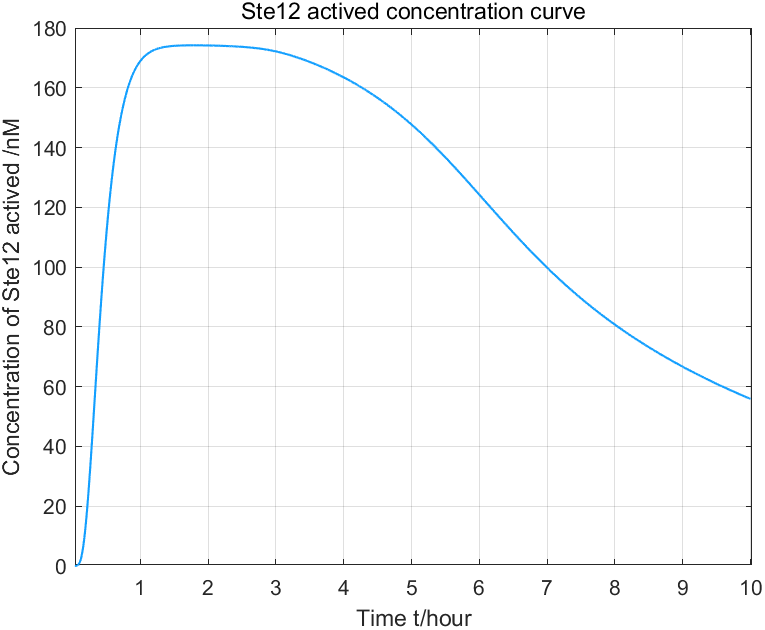 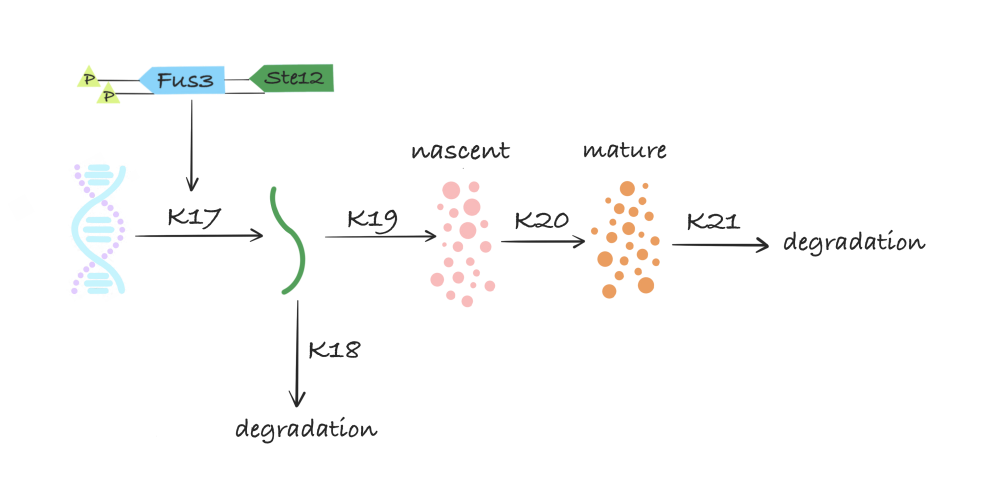 The MAPK pathway generates activated Ste12 proteins that act as regulatory factors to activate fluorescent protein genes, expressing fluorescent proteins that visualize the Tasting Officers binding ligands. Since regulation of gene expression is involved here, we decided to use the Hill equation to describe this process and set the relevant parameters.
The equation of the process is shown below.

The parameters of the process are shown below.

Table 4. Values of the parameters involved in the expression of Fluorescent proteins

We can see the relationship between the concentration of fluorescent protein and time as follows. 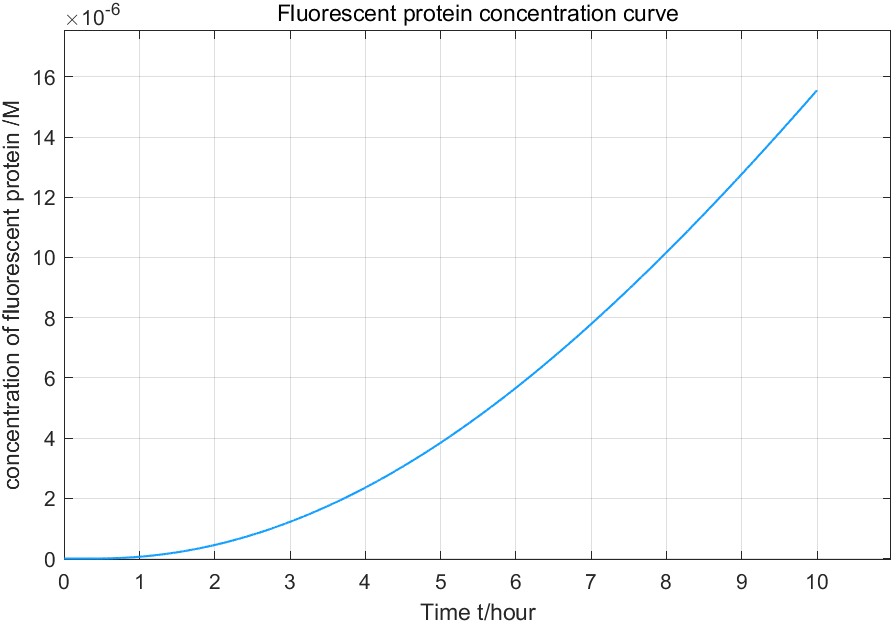 Formation of the Ste5 Complex 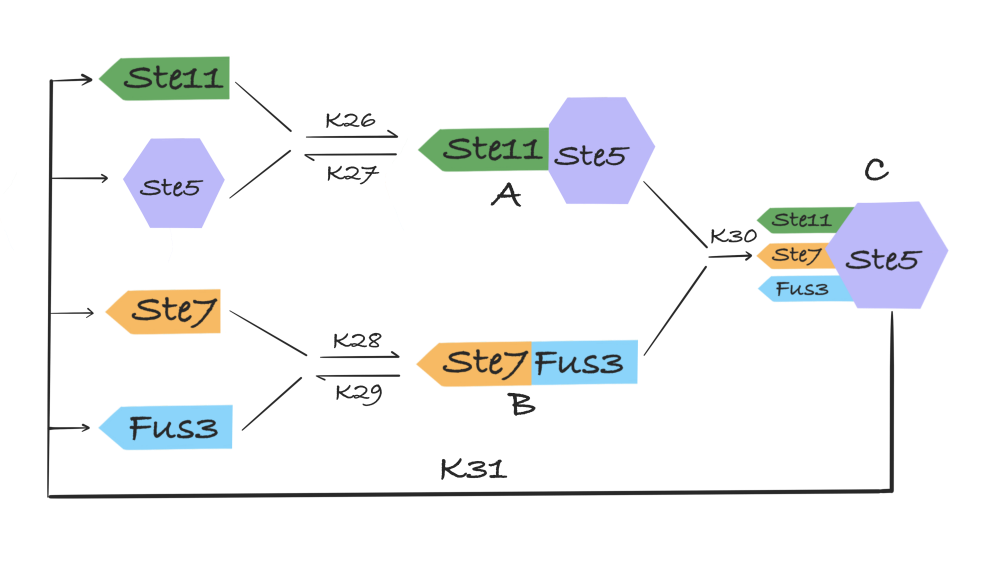 The parameters of the process are as follows.

The concentration of complex C varies as follows. 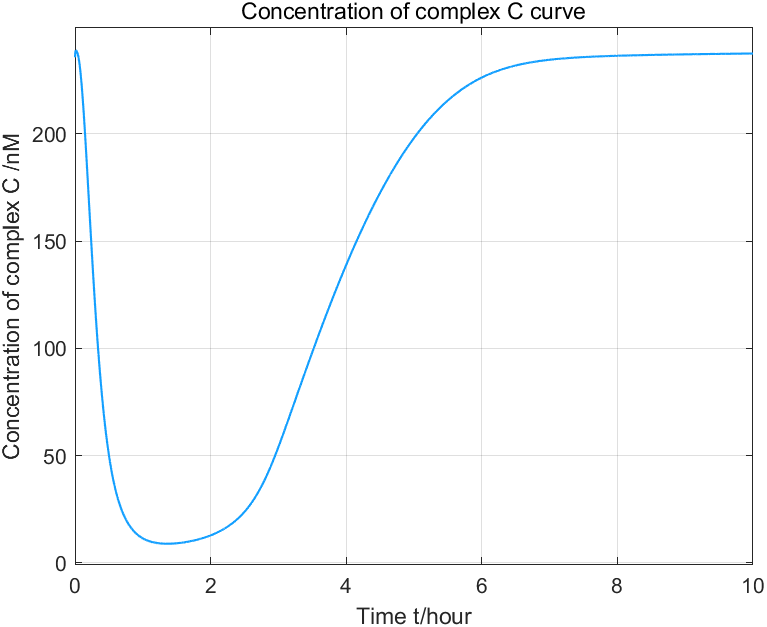 Fig 11. Variation of the concentration of complex C

Changes in Concentration of Other Substances Involved in the Model

parameter values refer to the settings of the previous modules

Table 6. Initial values of the parameters involved in the model 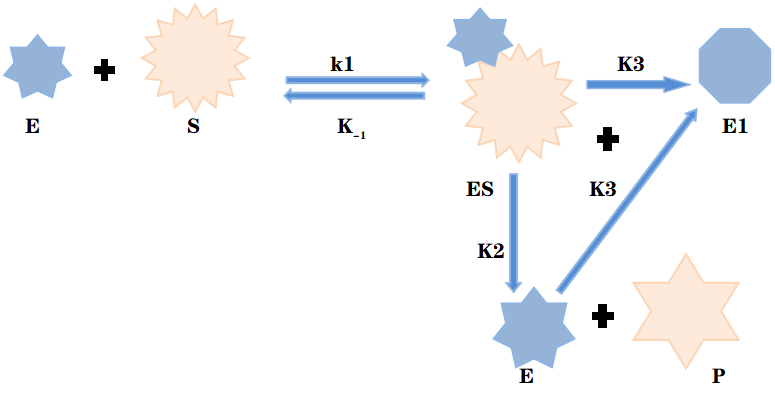 In our project, we use plant-derived soybean isolate protein for enzymatic digestion, and the resulting product will be the base ingredient for the configuration of the private label seasoning.


Flavor in relation to hydrolysis degree 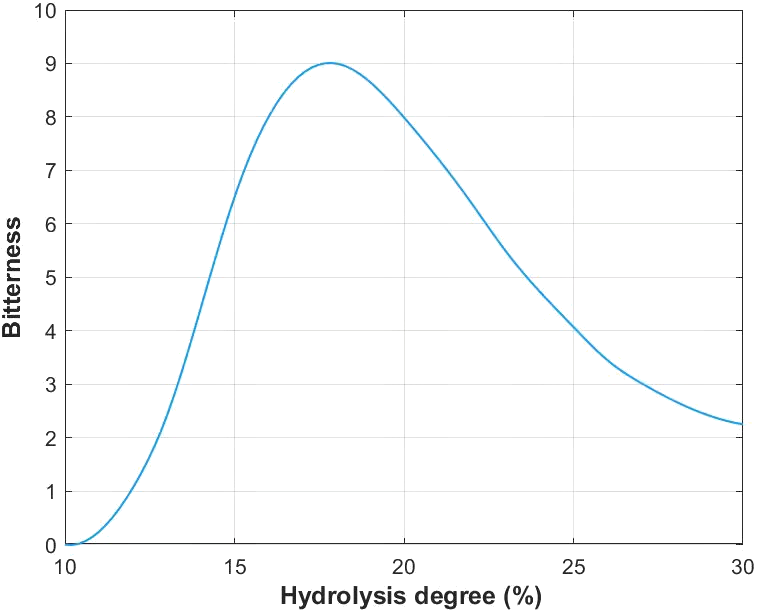 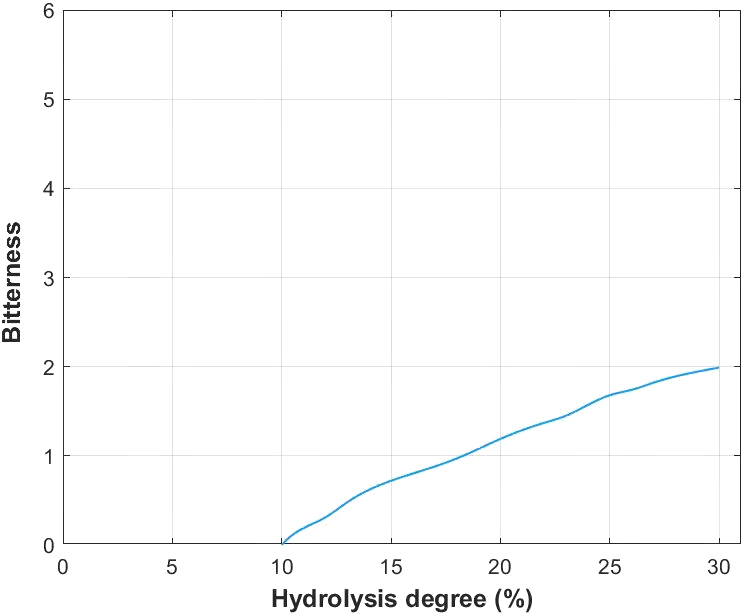 Fig 3. Correlation between bitterness value and hydrolysis degree of the exonuclease digest 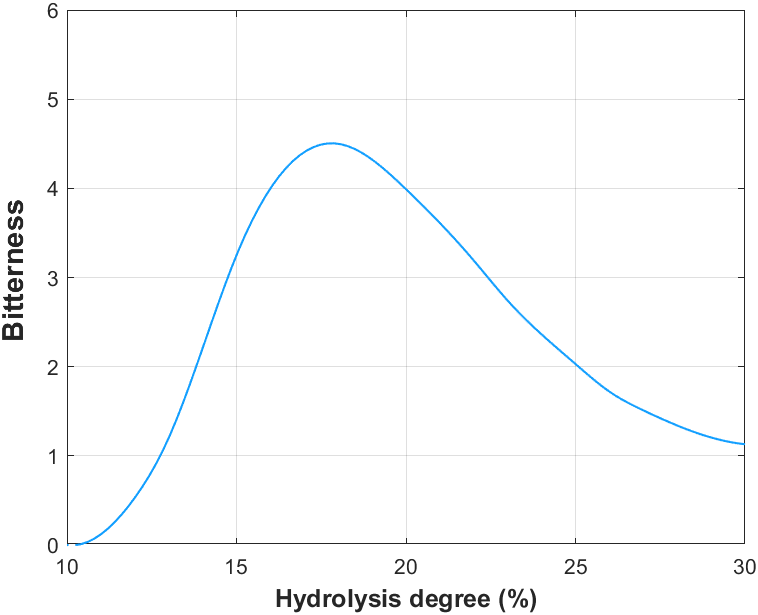 Through our experiments and analysis, three different ratios of protease enzymes were debugged and the hydrolysis interval that could achieve the best flavor was basically determined, and then three kinds of flavoring products were produced.


In order to save the production cost of flavored condiments and adjust the optimal substrate concentration and enzymatic reaction time, we took the process of trypsin digestion as an example in the next ordinary differential model, and derived the expression of protein hydrolysis degree as a function of initial protease concentration and protein concentration under the conditions of known protease related constants by analyzing the mechanism of enzymatic reaction. Using our experimental measurements of trypsin digestion, our model fits well and can therefore be used to predict the optimal reaction time and the optimal substrate concentration for the production of flavored condiments, which can then be used as a guide for subsequent production.

We set the parameters for the model as follows.

First we observe the enzymatic reaction:

The process of protease inactivation can be expressed as follows.

The mechanism of substrate inhibition in this process can be described as follows.

The mechanism of product inhibition in this process can be described as follows.

When the enzymatic reaction reaches equilibrium, the concentration of the enzyme-protein complexcan be set to be essentially constant according to the the Pseudo Steady State Hypothesis. So we can find 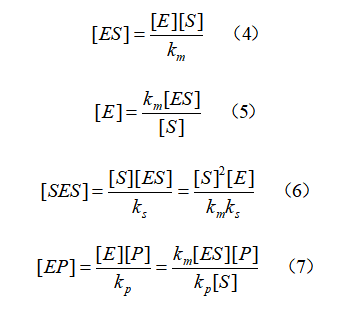 The total concentration of protease can be expressed as

By integrating equation (11) we can obtain that

From (2), (10) and (12), the expressions for the rate of protein enzymatic reaction under the conditions of combining substrate inhibition and product inhibition can be obtained as follows.

where the expressions for the parameters a,b are as follows. 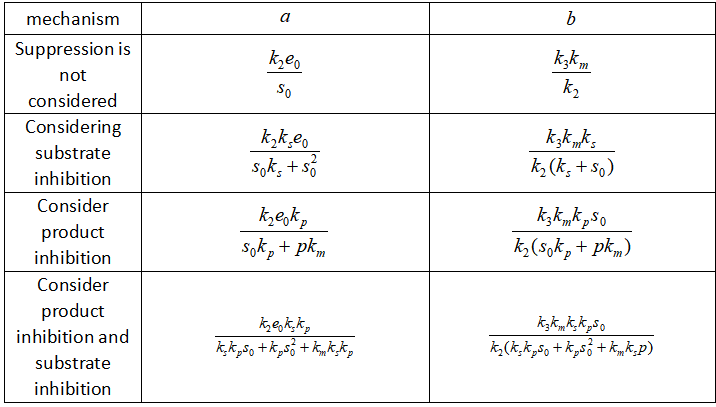 
Therefore, the relationship between the hydrolysis degree and the time under the conditions of protease digestion can be expressed as follows.

In the process of enzymatic digestion with trypsin, the parameters involved are set as follows.

Thus we can obtain the relationship between the hydrolysis degree and time.

The above equation allows us to obtain the simulation results of the degree of hydrolysis of soybean isolate by trypsin enzymatic digestion. 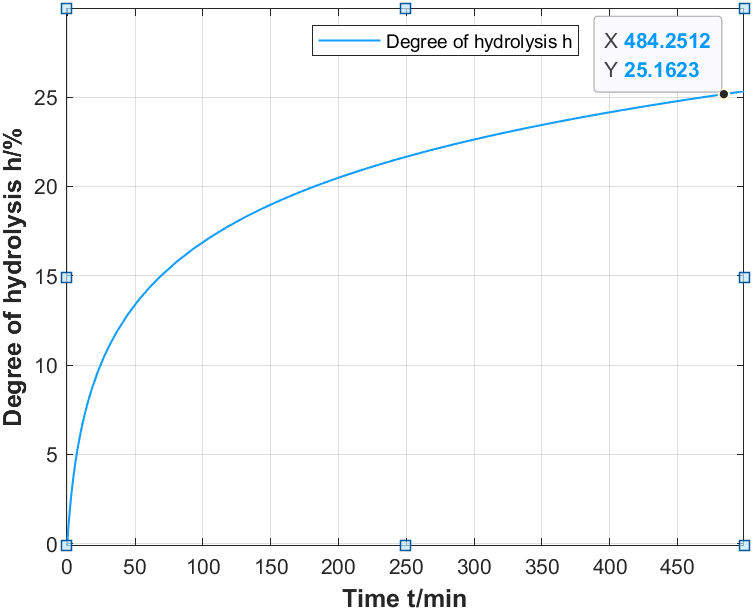 Fig 5. the Relationship between Protein hydrolysis degree and the time


Using the above model we predicted the degree of hydrolysis of a certain concentration of protein (2.439 g/L) using different concentrations of trypsin enzymes for a fixed enzymatic digestion time (8h) as shown below. 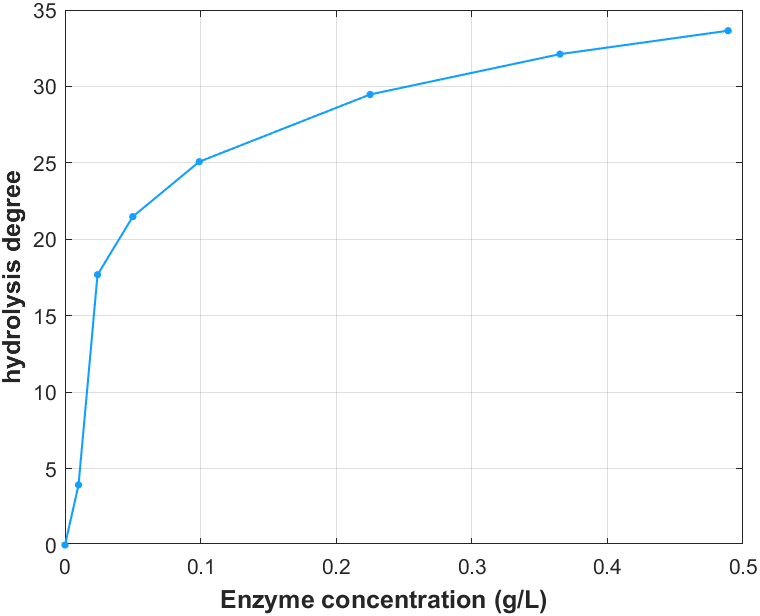 By modeling the signaling pathway, we have understood how a Tasting Officer cell reflects the flavor intensity by fluorescence after sensing the flavor substances. However, in the practical application of taste detectors, we have to consider the fluorescence effect from a macroscopic perspective.


At the same time, by the description of the signaling pathway, we can see that in order to enhance the output fluorescence intensity, we have made some modifications to the original signaling pathway of Saccharomyces cerevisiae cells by knocking out Sst2, Far1 and Ste2 genes. In the following, we call this cell the engineered yeast cell.

Based on the assumption that the growth of both normal yeast cells and the Tasting Officer cells during growth is limited only by environmental space and nutritional factors, we used a Logistic growth model to describe the growth of the cells.

Refer to the 2019 BIT-China team for related ideas, the integral form of the logistic growth model can be obtained by solving for the initial value N0,initial moment t0 as

In order to determine the parameters among the model, we performed culture experiments with yeast cells and engineered yeast cells and measured the absorbance (OD600) of the yeast suspension at different moments in the culture cycle by spectrophotometer. A review of the literature showed that the values of the bacterial density of the yeast suspension y showed a linear relationship with the absorbance x in the effective interval (0.2-0.8). And that is

Therefore the indicator of absorbance reflects the concentration of the suspension at the time of measurement and thus the growth of the yeast.


Based on the information reviewed [1] we learned that the relationship between the OD of the yeast suspension and the original OD after dilution is not linear, but shows a power exponential form. Based on the references and the experimental data, we first determined the relationship between the OD600 of the original yeast solution and the OD600 value after dilution during the actual measurement at different dilution multiples as follows.

The parameters in the equation are set as follows

Table 1. Parameters of the relationship between the dilution times of the bacterial solution and the OD value

We measured the OD600 values of the undiluted bacterial broth and the broth diluted at the corresponding multiples, fitted them, and solved them with the software to obtain the following values of the above parameters.

Table 2. parameter values of the equation of bacterial solution dilution and OD

The growth curves of cultured yeast cells and taste detection officers were obtained by fitting the experimental data as follows.（The OD600 of the undiluted bacterial solution calculated by the above equation was used, and some of the measured OD600 values that did not fall within the 0.2-0.8 range were excluded.）

Based on the experimental data, we fitted the parameters in the above logistic model using a nonlinear fitting method.

During the experiments we used three enzymatic products as flavoring substances, and the ratios of each group to prepare the seasoning are listed below.


Table1.Experimental ratios for each group

We measured the intensity of the various flavors presented by each group through the electronic tongue device in the following table.


Table2.Flavor intensity values for each group


From the measurement results, it can be seen that the main taste indicators of the samples are: sour, bitter, umami and salty. 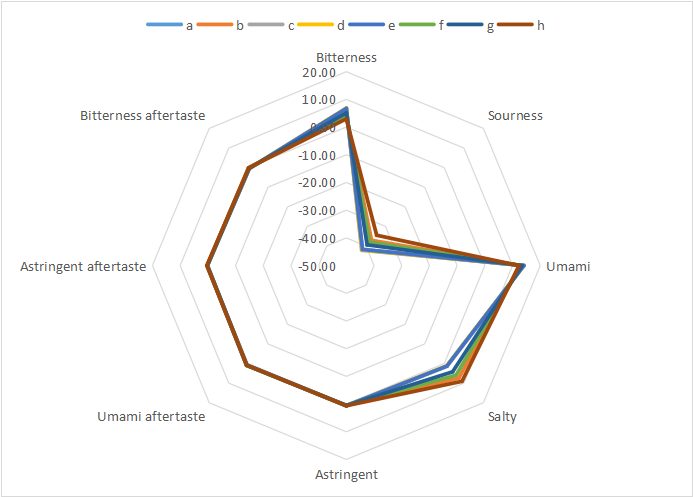 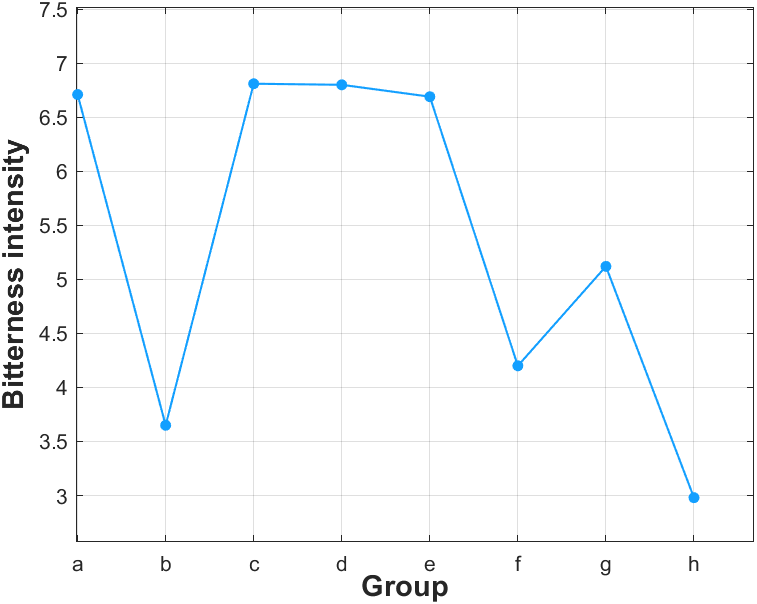 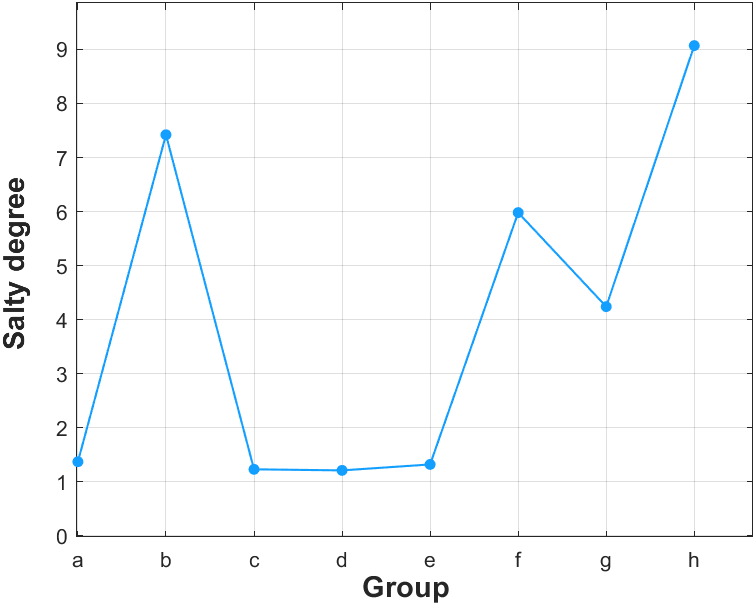 The salty intensity of the different groups of seasonings can be seen in the above graph. The saltiness reflects the taste presented by inorganic salts such as table salt in the samples. 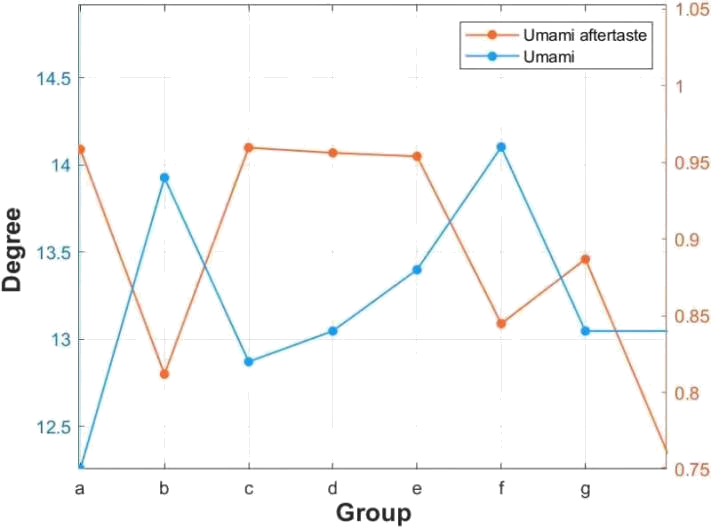 The above graph shows the intensity of umami and the richness (umami aftertaste) of the seasonings presented by different groups. 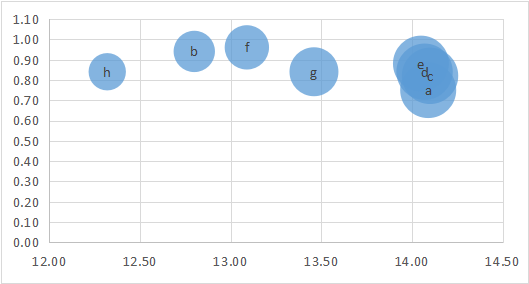 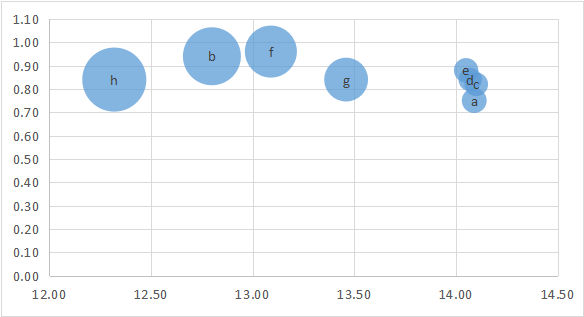 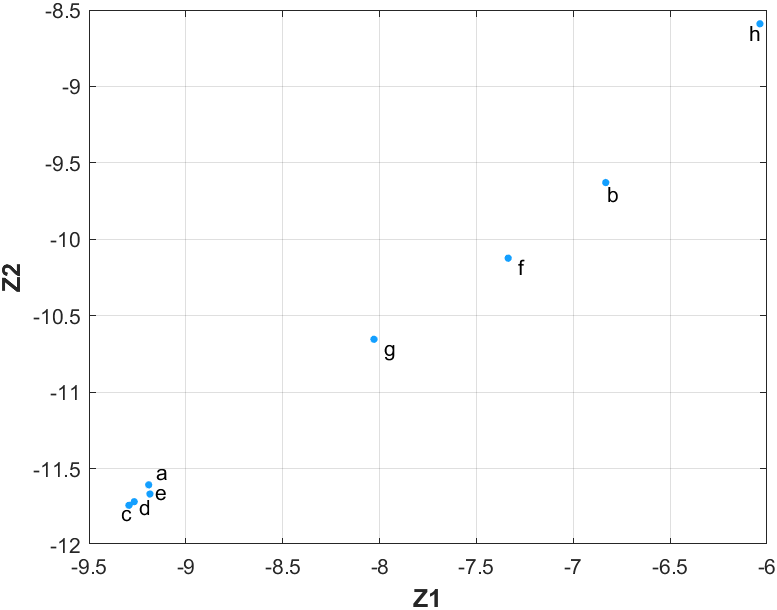 From the above analysis we can conclude that:


Such experimental results and analysis have a guiding meaning for us to further promote our products to different groups of people, we can appropriately configure the mix ratio of seasoning 1 and 2 according to the taste preferences of the target group for seasoning 1 and 2, and rely on seasoning 3 to adjust the overall umami and complexity of the seasoning.


Based on these two objectives, we developed a simple web application "Flavor card", which contains many common staple foods, dishes and drinks, and records the intensity of these foods corresponding to various flavors. In the process, customers can select any kind of food they like and mark the preference (integer, 1-5) for each food they choose. By analyzing the users' choices, we can get the average preference of users about each flavor, and get the user’s favorite flavor based on the average preference. Finally, after getting the results, we prepare an exclusive color for each flavor and give the corresponding analysis, enabling the user to meet with the favorite flavor by this visualization.


It must be admitted that the current "Flavor card" is still relatively primitive in terms of the variety and number of dishes and the algorithm used to analyze the user’s preferences, there are still certain shortcomings, but we hope that this program can make some contribution to understanding people's taste needs and provide a reference for future taste research. So, if you are interested, why not give it a try? Click thisand let's meet our favorite flavors together!