In July,the BIT team and the BIT-China team had their first project communication meeting in Conference Room 616, Zhongguancun 5, Beijing Institute of Technology. In this meeting, both teams reported the progress of their completed projects, and Shi Huijing, the representative of the BIT team, presented the project "Early Diagnosis of Colorectal Cancer". We understood the clear project line and research line of the BIT team, which allowed us to optimize the logic of our project. 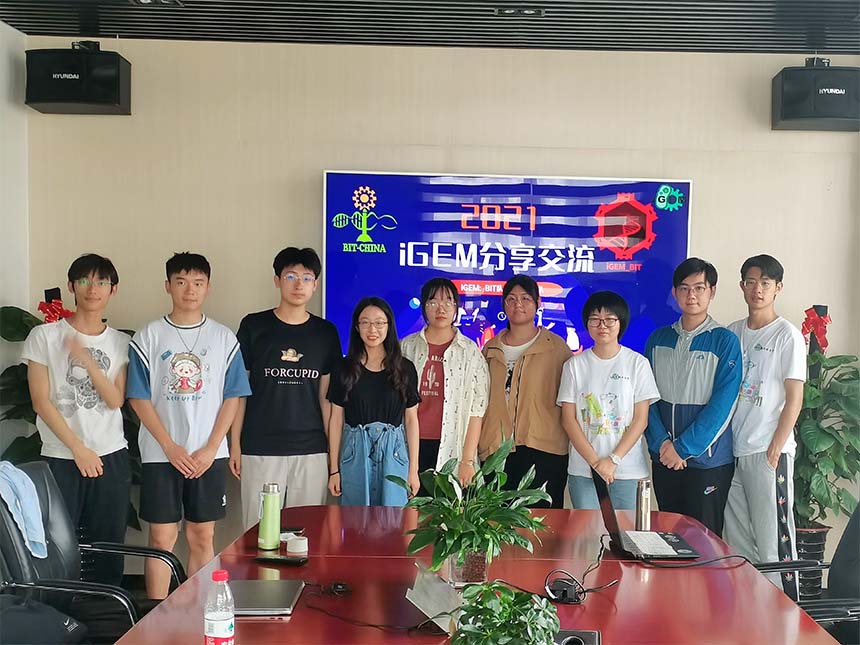 After that, the BIT-China team members introduced each part of the project "Creative Tasting Officer" and showed our project to each other.
Through the questioning session, we learned that our idea of taste detection is a bit young and we need to further define the sensitivity, accuracy and range of detection; our seasoning can be popularized to all people and promoted under the slogan of "personalized". 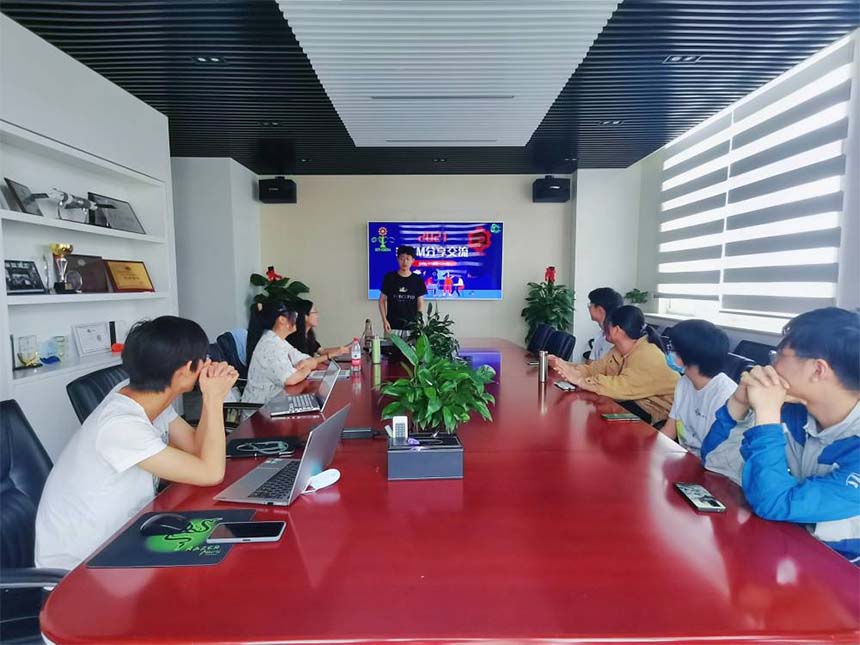 After the meeting, BIT team leader Taiyan Zhou then led a tour of the lab and space barn where the BIT team works, providing a basis for subsequent communication. 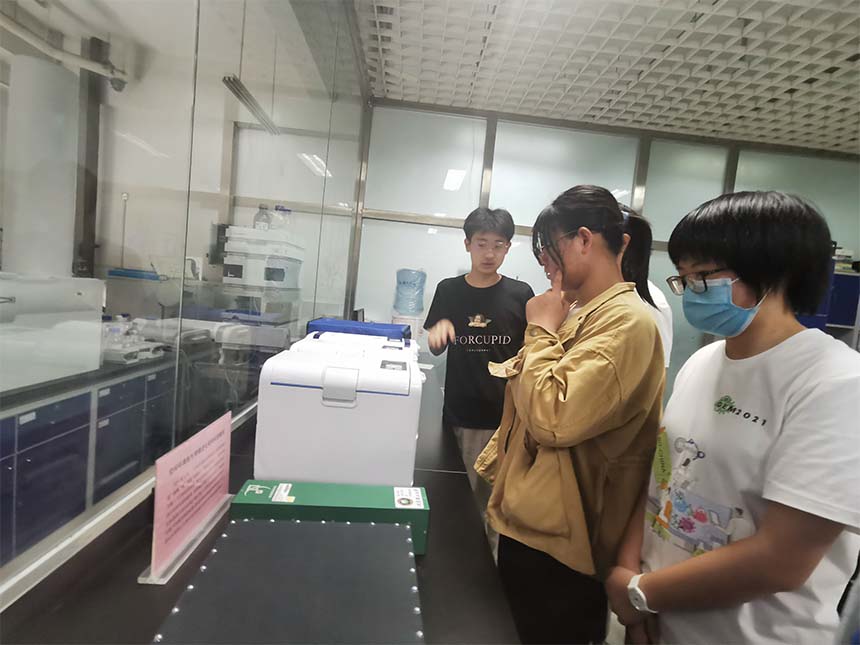 In June 2021, through the official group of iGEM China, iBowu-China contacted us, hoping to contact Mr. Lv Bo from the School of Chemistry and Chemical Engineering of Beijing University of Technology through us to give some guidance to their project, and thus we started our cooperation.

Having learned that iBowu-China won the best human practices nominees in 2019, we approached them with the idea of an exchange to learn how to run HP campaigns.

So on July, 2021, we held an online meeting and invited the captain of iBowu-China 2019, and we both briefly introduced our mutual projects and presented our preliminary HP ideas.

They suggested that we consider the issue of nutrient content of seasonings and told us that we could adopt a closed-loop HP approach of visit-modify-revisit-remodify, involving both upstream, midstream and downstream stakeholders, to really connect with the community and collect suggestions from all aspects to improve our project.

The captain of iBowu-China 2019 also gave a brief description of the HP of that year's competition and suggested that we can take different forms of HP activities, such as visits, interviews, questionnaires, etc., and design different questions according to different objects so as to get the desired feedback for improving the project.

Through this exchange, we gained a lot of knowledge about HP, which guided our subsequent HP activities. 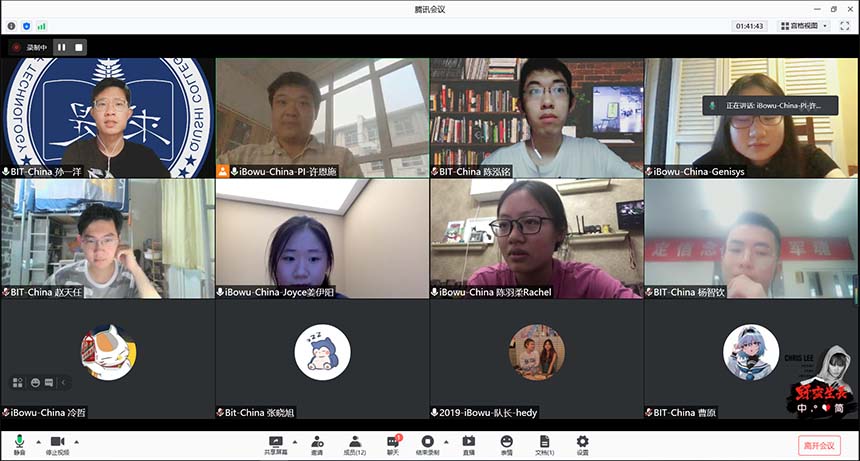 On July 24, 2:30 pm, BIT-China team and iBowu-China team had a project sharing and exchange meeting in the conference room 327, Industrial Ecology Building, Beijing Institute of Technology. 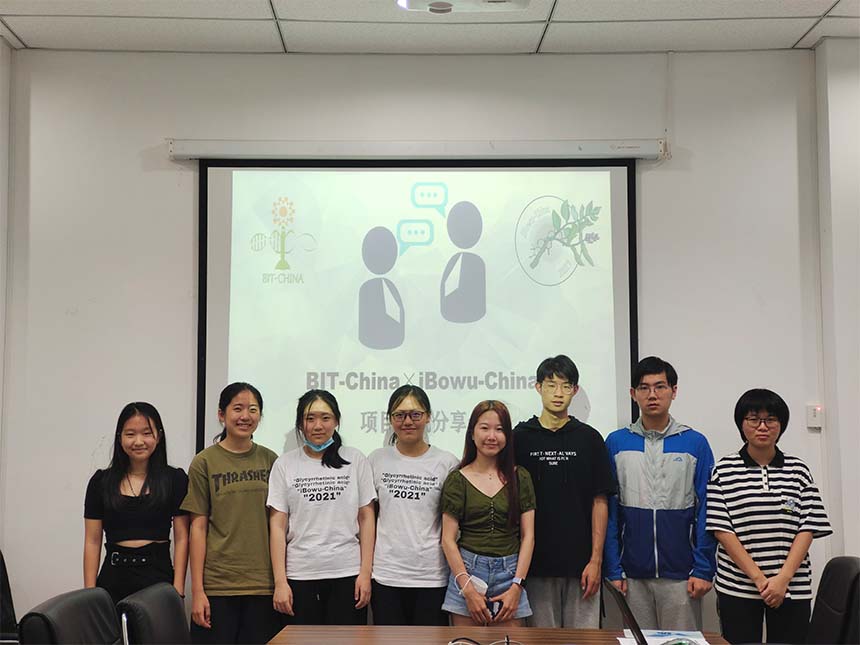 In this exchange meeting, both sides watched the iGEM project promotional video produced by each side.

The two teams then gave a brief report on their current project progress, in which the three members of BIT-China team introduced each aspect of the "CREATIVE TASTING OFFICER" project, while iBowu-China team, represented by its captain, gave an overall explanation of the "Glycyrβ" project. 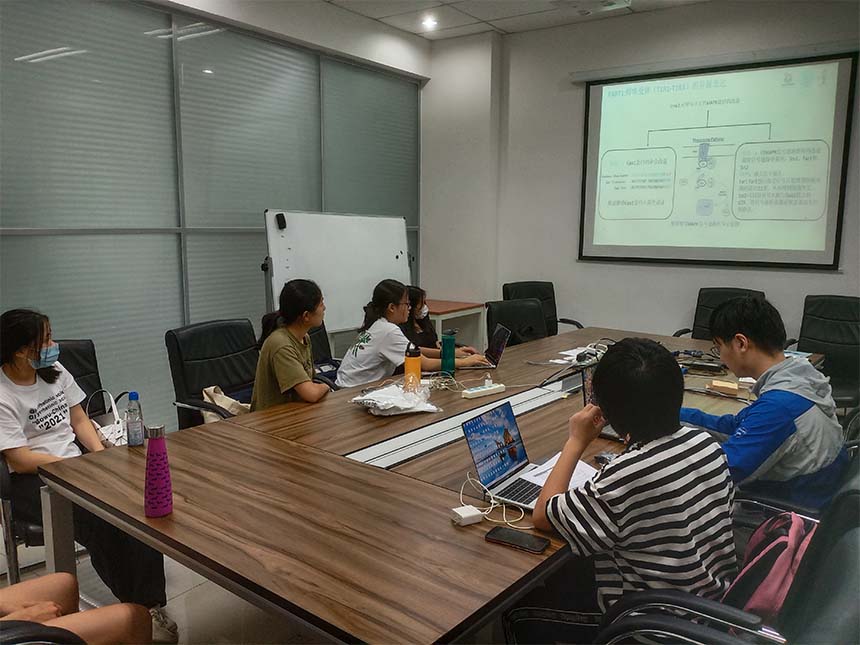 They also asked about the method of measuring enzyme activity and how to perform codon optimization, and the BIT-China team members answered them in turn.

At the end, the iBowu-China team captain presented the first edition of the team uniform to the BIT-China members and invited us to participate in the junior picture book biodoodle and the promotional booklet biogallery led by them.

In the follow-up time, we also kept in touch and exchanged ideas about education with each other in WeChat. iBowu-China thought of teaching biology to liberal arts students, and BIT-China suggested that they should talk about some biological knowledge closely related to life, which could fit well with their major, such as the integration of synthetic biology and law.

iBowu-China has told us that we can educate the society about some misconceptions about synthetic biology, for example, that gene sequencing can measure whether you are smart or not, and such science has practical significance. iBowu-China has learned this point and is planning a follow-up collaboration. 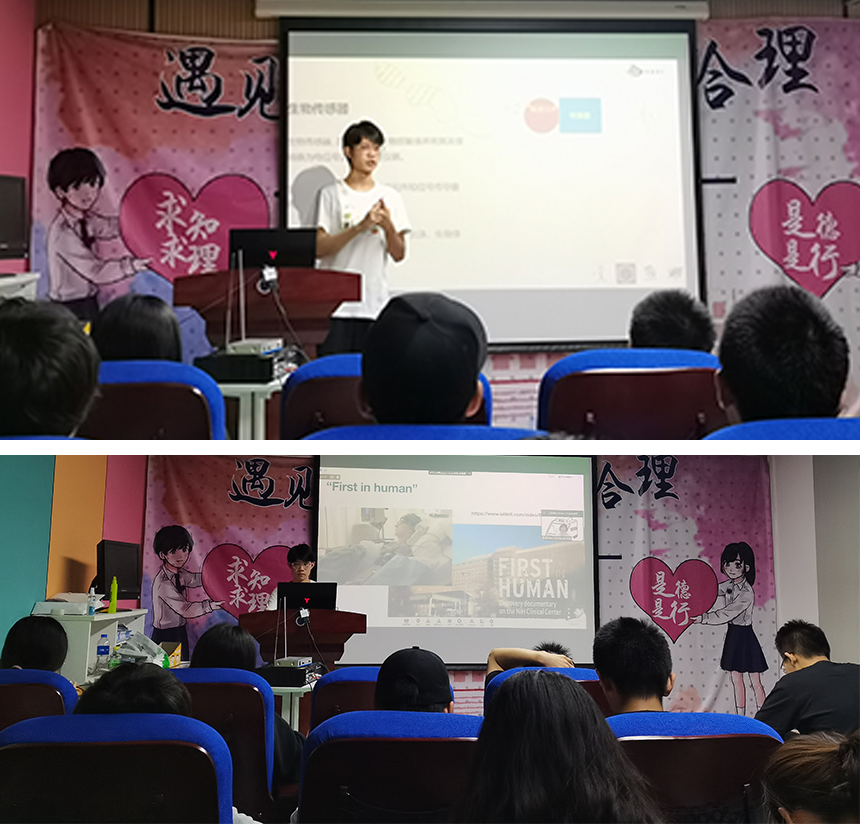 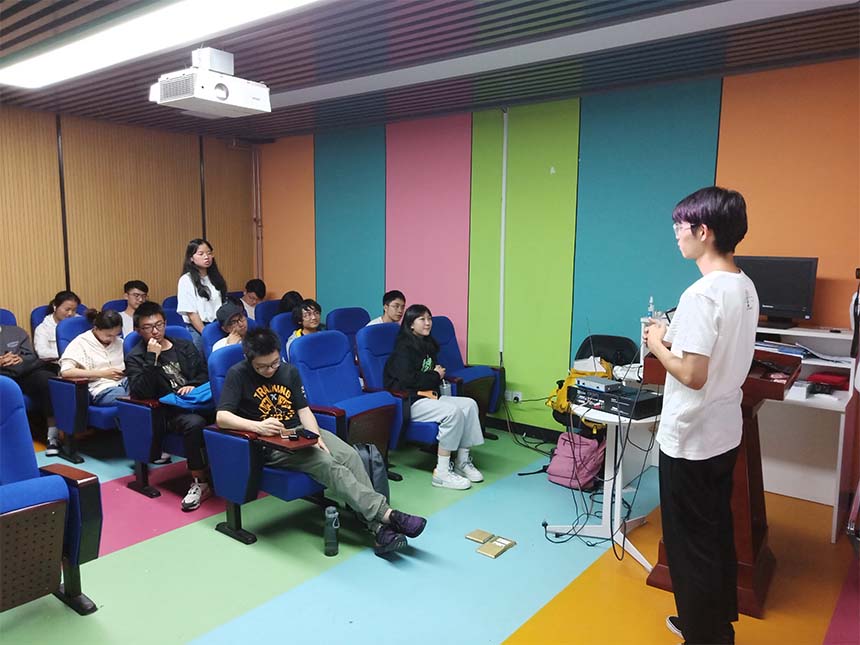 The biodoodle led by iBowu-China and participated by BIT-China has been officially launched and made into a physical book. They mailed it to us first and let us see the real face of this synthetic biology rich science book. 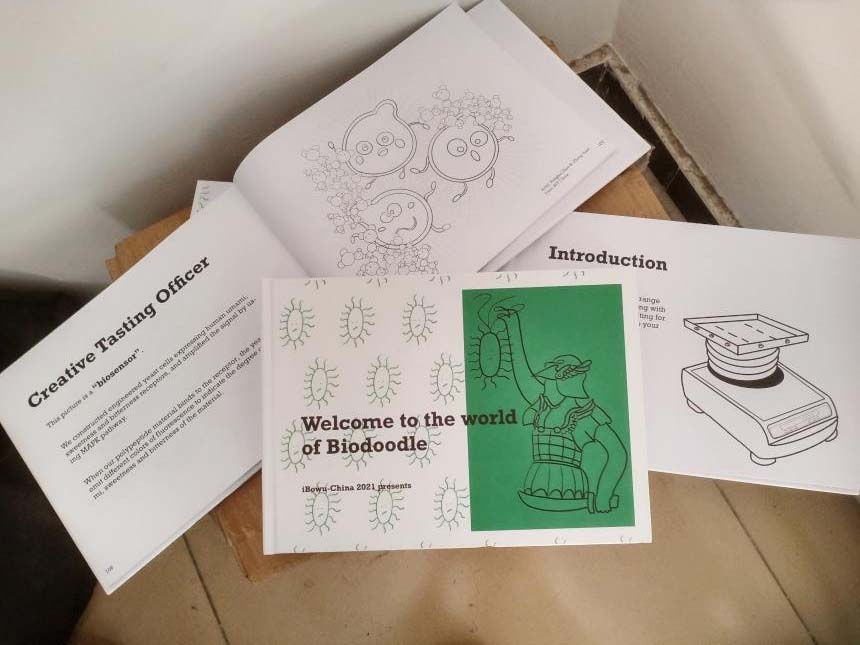 Meanwhile, iBowu-China wants us to help promote biodoodle and the questionnaire about synthetic biology books. I have asked my elementary, middle and high school science and biology teachers to help with the promotion. At the same time, iBowu-China wants to know what help secondary school students need in science and technology education so that they can carry out follow-up education.

Our captain interviewed Ying Quan, his middle school biology teacher, and she told him that there are currently after-school service programs in both middle and high schools, and wondered if we could introduce something into the curriculum that was related to what our team was doing, perhaps a training series or a collaborative group study. This provided new ideas for both of our team's education.

BIT-China used the iBowu-China-led, BIT-China-participated biodoodle in the education for elementary schools, and the children colored in the BIT-China-supplied pictures and learned about biosensors as a result. Meanwhile, while reading the illustrated book, the students got to know many laboratory instruments such as PCR instruments and pipettes through the pictures.

After asking the children how they felt about using it, we gave feedback to iBowu-China. The students mentioned that the picture book was in full English and they were able to understand some of the content through the pictures, but their comprehension was limited and they hoped that a Chinese version of biodoodle would be published. 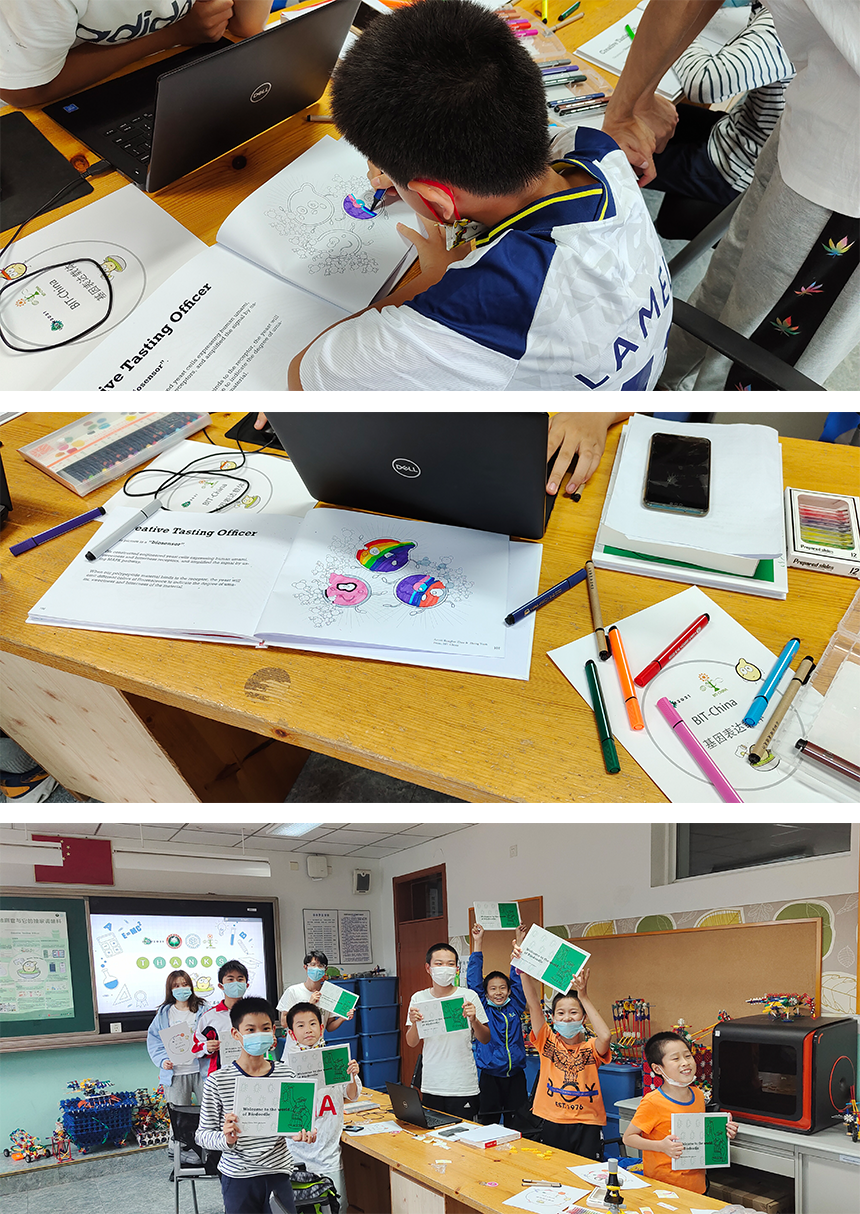 Since the education part of the project wanted to find strains with blue fluorescent protein to complete the bacterial painting, we searched through iGEM in China and were very happy to get a reply from the BNDS_China team and got strains with blue fluorescent protein for our subsequent education part as well as for the part of different flavor receptor membrane localization assays.At the same time, we donated the obtained plasmids to CKWA-China for their team’s experiments.

Thanks to the CPU_CHINA team for making the video, allowing iGEM teams from all over the country to spread iGEM and synthetic biology in their own way.


"ICII" meaning Into CHINA, Into iGEM, is an Education&Collaboration event co-sponsored by CPU_CHINA and NAU_CHINA, inviting 17 iGEM teams from all over China to participate together.

We hope to make a greater impact on synthetic biology through the joint promotion of multiple teams throughout the country. We can approach every city, so as to achieve the common desire of project science popularization and iGEM event promotion; and to make the new technology and new ideas presented in a more concrete form, so that people can easily accept and leave a more profound impression.

At the same time, we hope that the final video presented will let the iGEM world see the culture of different cities in China, the power of science and technology in China now and the enthusiasm of the Chinese people for the development of biotechnology, and let the world further know about China through ICII. 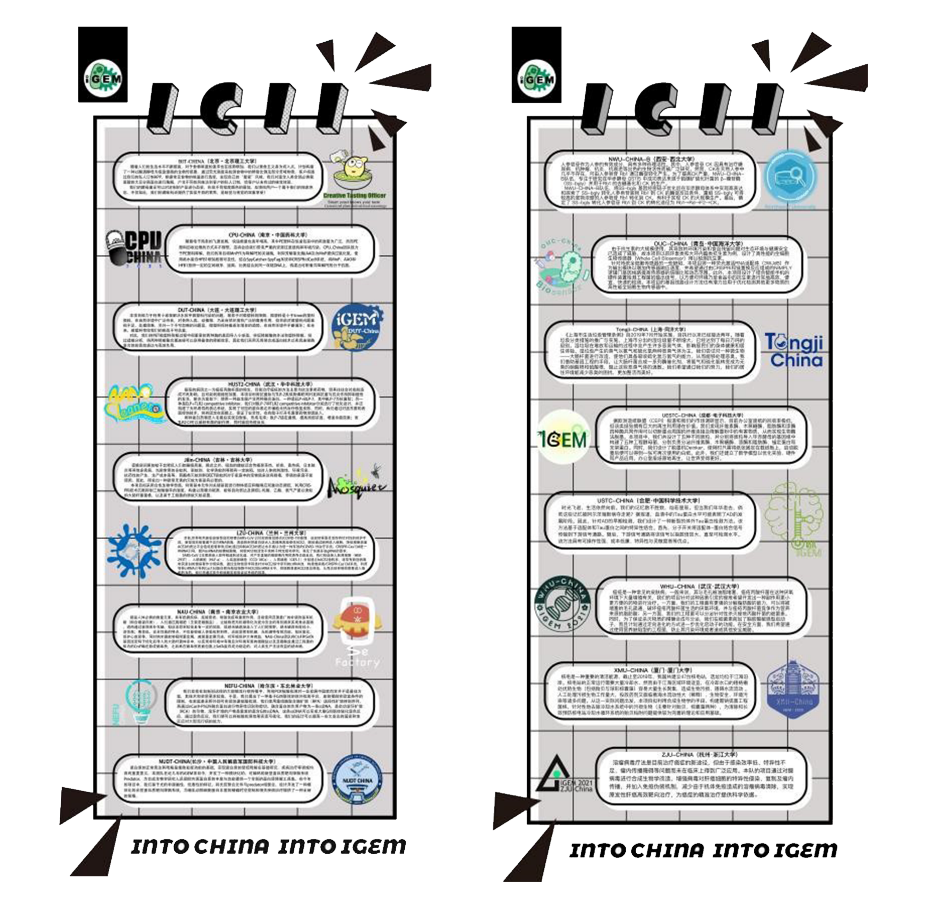 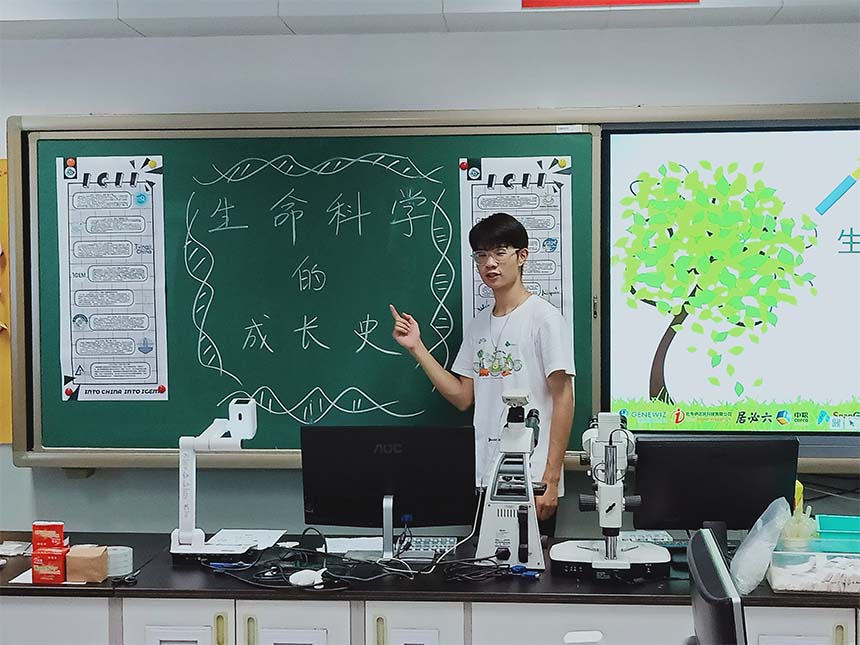