Our goal is to construct a kind of Saccharomyces cerevisiae whose function is to detect taste, and finally to judge the proportion of various tastes in food through fluorescence intensity. This target involves the expression of the following taste receptors: umami taste receptors (T1R1, T1R3), sweet taste receptors (T1R2, T1R3), bitter taste receptors (T2R1, T2R4, T2R46). These three receptor proteins all come from the human genome, the purpose is to ensure that their detection is more suitable for human taste perception.

The biosensor we constructed with Saccharomyces cerevisiae as the chassis cell is mainly divided into two parts: 1. Receptor expression system 2. Detection system. In building the above system, we have successfully completed the construction and verification of many BioBricks. Take the following four BioBricks as examples:

Function as receptor protein, as part of umami taste receptor

The bitter receptor gene is followed by the fluorescent protein gene, which plays a role in judging whether the receptor protein is positioned correctly.

It functions as an inducible promoter for expressing receptor proteins.

Overexpression of this gene in Saccharomyces cerevisiae can achieve a certain degree of high temperature tolerance.

Relevant data will be recorded below, hoping to make some contributions to the iGEM community.

The protein encoded by this gene is a G protein coupled receptor, which is a component of the heterodimeric amino acid taste receptor T1R1+3.

The plasmid design is as follows: 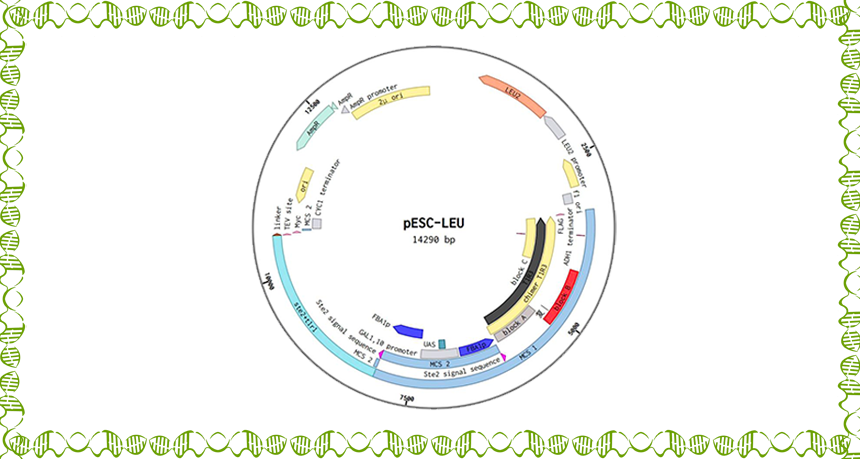 Below we will focus on the basic situation of T1R1 gene synthesis and expression:

Modification and synthesis of T1R1 gene

We first obtain the sequence of T1R1 from NCBI, and then use Snap Gene to optimize the sequence. The sequence optimization is mainly to modify the signal peptide of the heterologous receptor. The method is to use the first 17 Aa of Ste2 to the first 20 Aa of mGluRα of T1R1 ( The signal peptide of the protein) is replaced, and the purpose is to increase the content of T1R1 in the endoplasmic reticulum, thereby increasing the probability of its positioning on the membrane. After entrusting Jinweizhi Company to optimize the codons, we can synthesize the target gene we need.

Fig2. Design (where SS is the signal peptide sequence of Ste2)

Result: The target gene was successfully designed, as shown below. 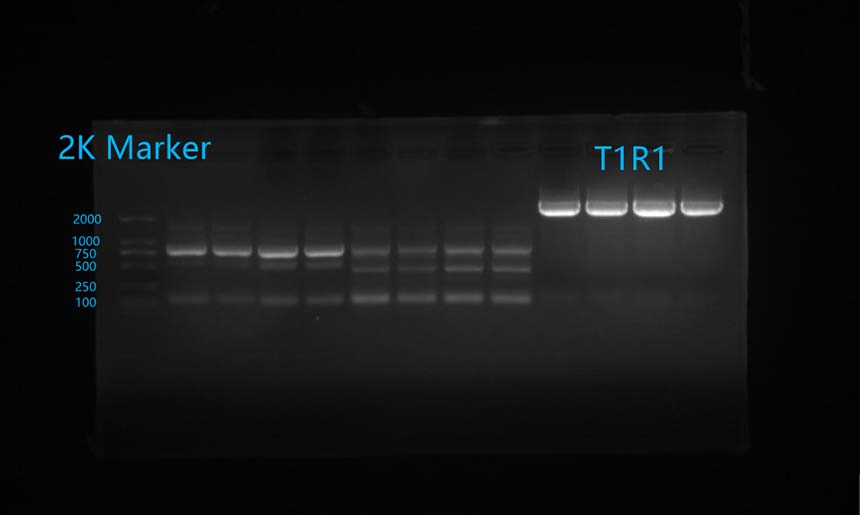 After successfully completing the synthesis of the T1R1 gene and plasmid construction, we introduced it into E. coli via an E. coli transformation experiment, and then cultivated it in a medium with ampicillin, and observed colonies growing on the medium. 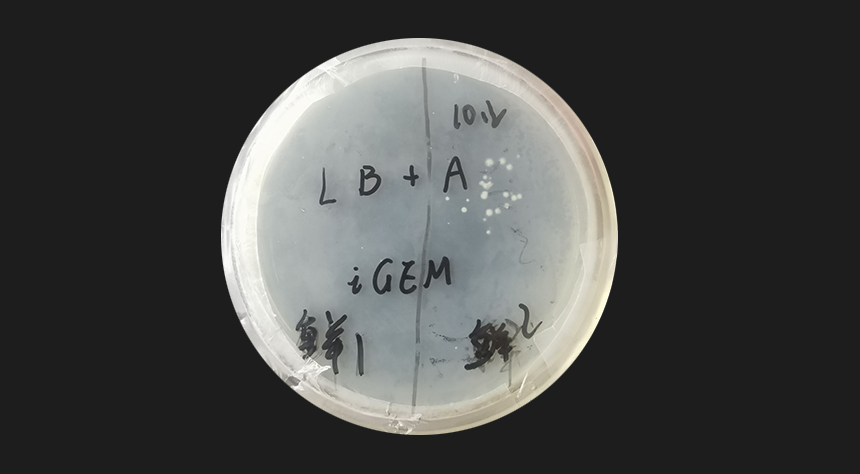 In order to verify whether the plasmid was successfully introduced into E. coli, we performed colony PCR, and then ran the verification gel and observed the correct band, which proved the successful construction of the plasmid. 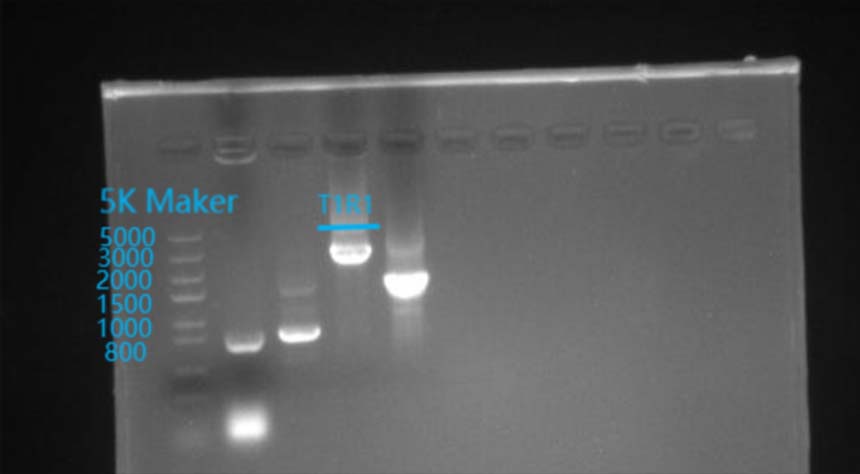 We successfully introduced the plasmid extracted from E. coli into Saccharomyces cerevisiae through electrotransformation. 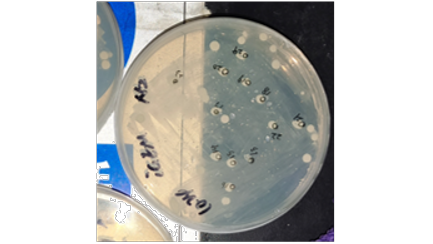 After realizing the yeast electrotransformation method to successfully introduce the plasmid into Saccharomyces cerevisiae, we then wanted to adopt a relatively simple and new way to realize the gene introduction: the specific idea is to divide the YPRC3 binding site into two parts and add it to the left and right sides of the target gene, that is, the left and right homology arms, are then transferred to Saccharomyces cerevisiae, after which homologous recombination occurs with the yeast genome. 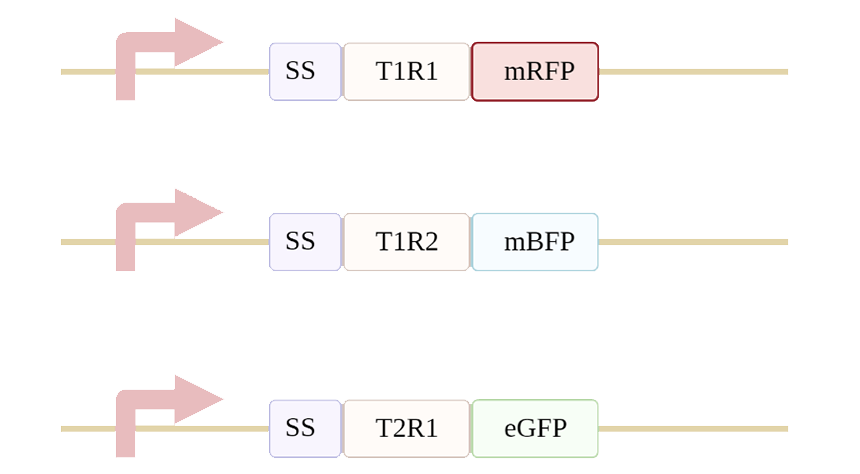 Fig7. The design of the receptor followed by the fluorescent protein

We obtained the Pfba1+eGFP fragment by OE-PCR. The following is a picture obtained after agarose gel electrophoresis. By comparing the length of the fragment, the success of the synthesis of the fragment is verified.

After achieving the successful connection of Pfba1 and eGFP, we integrated the fragment into pESC-LEU, and then introduced it into E. coli by the E. coli competent transformation experiment, and cultivated it in a medium containing ampicillin. We can observe there are colonies growing on the base. 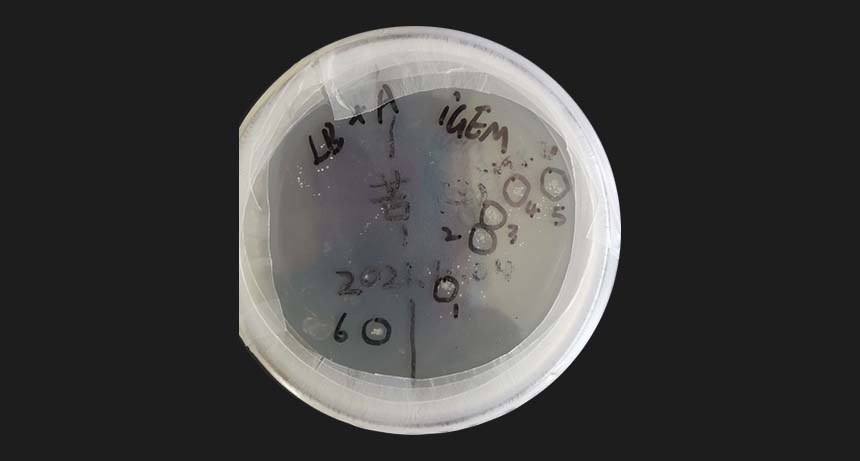 Fig9. Colonies grown after transfer to a plasmid containing T2R1+eGFP

In order to verify whether the plasmid was successfully introduced into E. coli, we carried out colony PCR, and then ran the verification gel and observed the correct band. After sequencing, the successful construction of the plasmid was proved. 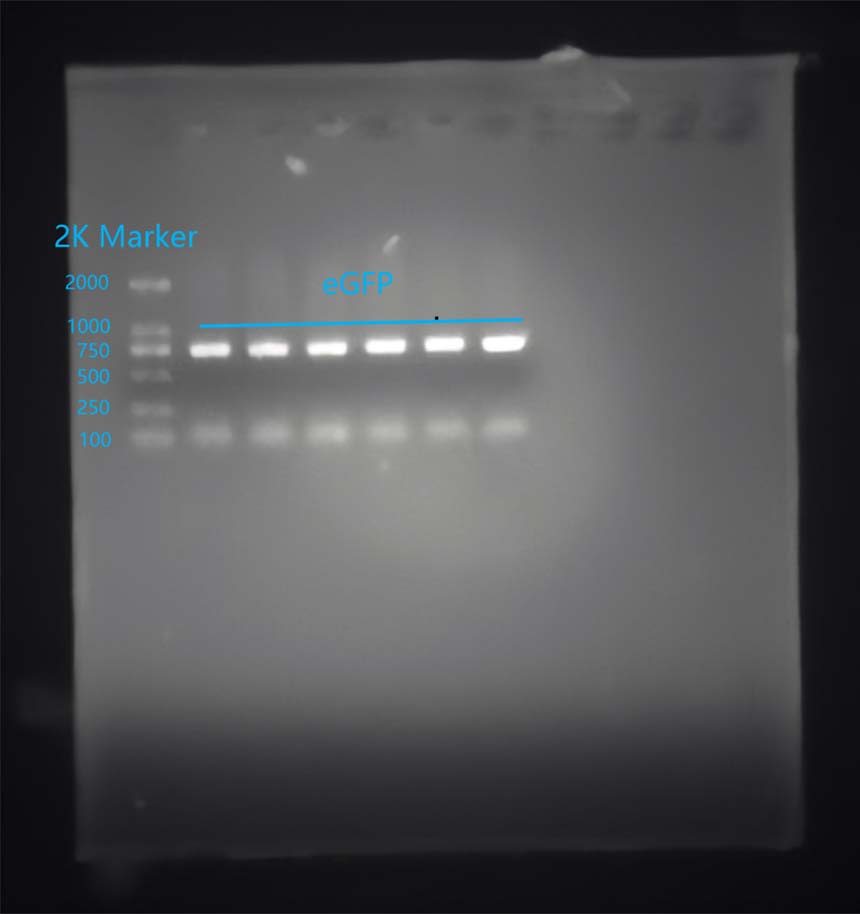 After picking the bacteria, extract the plasmid, perform Swa1 single-enzyme digestion, then AvrⅡ single-enzyme digestion, and then enzyme-linked to obtain pESC-LEU containing Pfba1+T2R1+eGFP. Then the plasmid is sensed by E. coli In the state transformation experiment, it was introduced into E.coli, and then cultured in a medium containing ampicillin, and colonies were observed to grow on the medium. 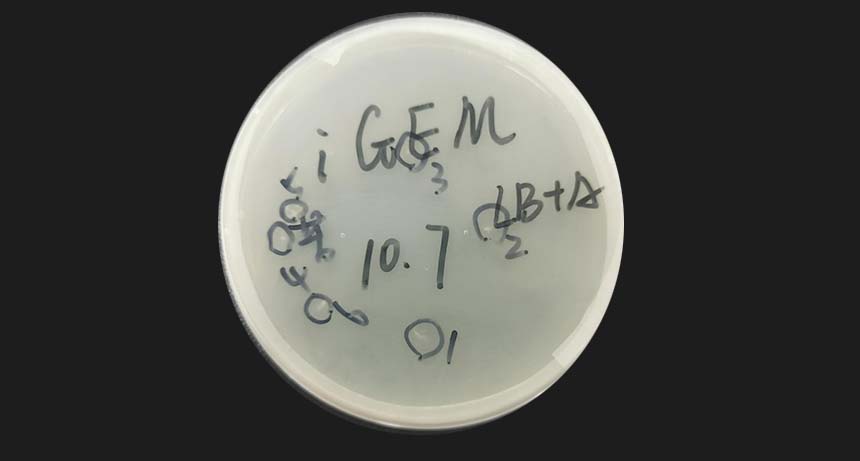 In order to verify whether the plasmid was successfully introduced into E. coli, we carried out colony PCR, and then ran the verification gel and observed the correct band. After sequencing, the successful construction of the plasmid was proved.

We successfully introduced the plasmids extracted from E. coli into Saccharomyces cerevisiae by electrotransformation. 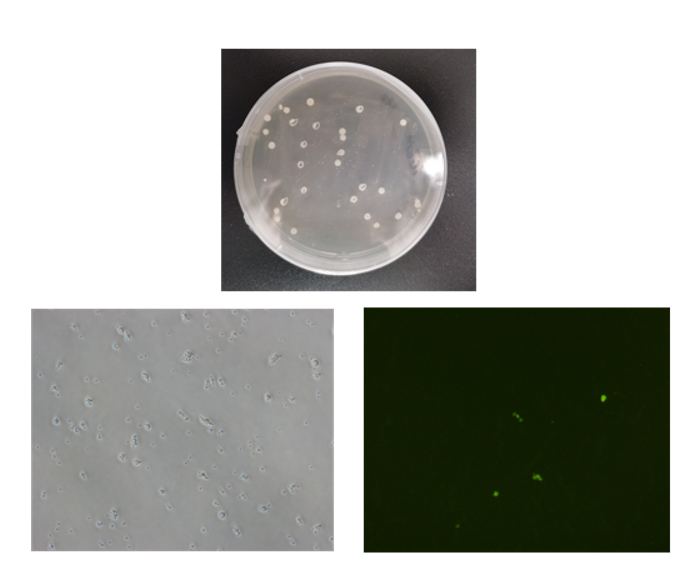 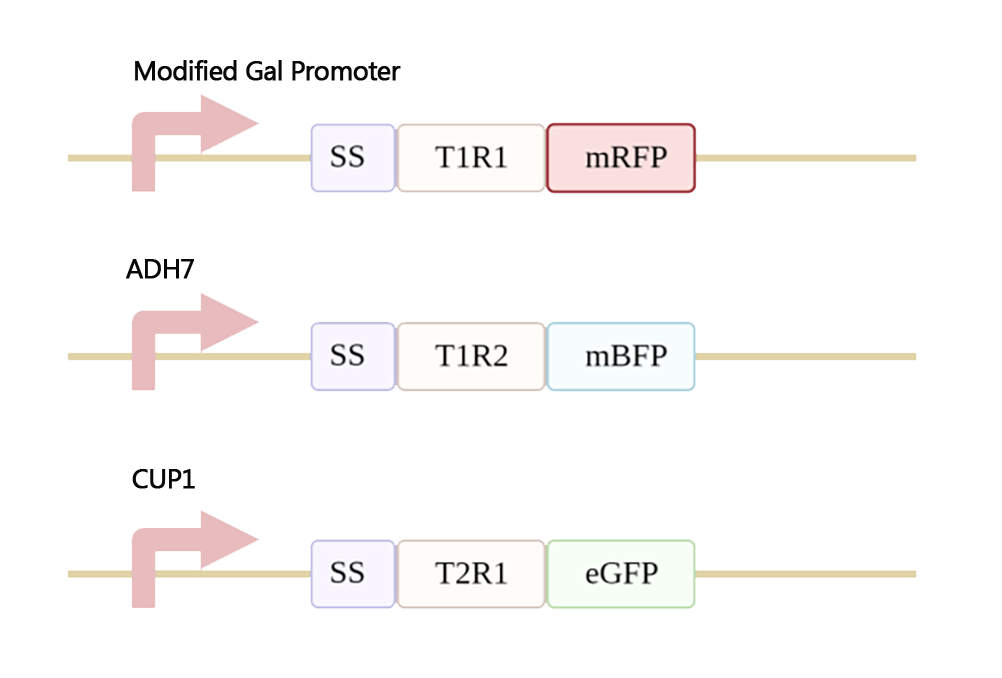 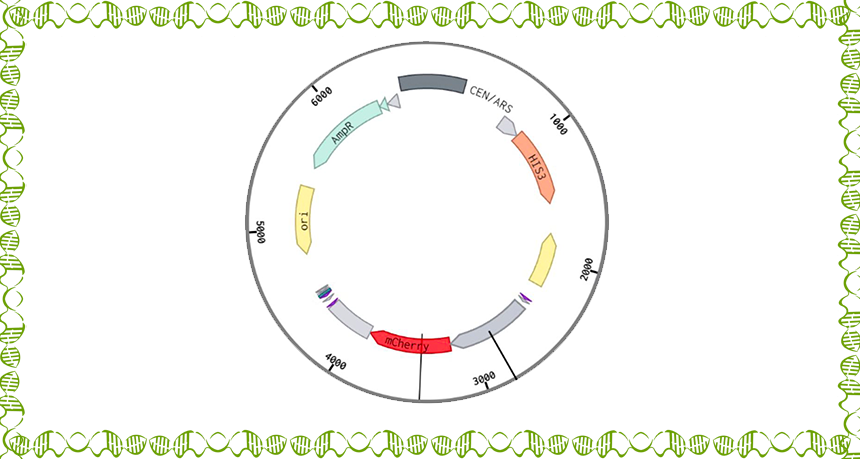 Plot the measured data into the following figure. It can be seen from the figure that within a certain range, increasing the amount of the inducer estradiol can enhance the strength of the Modified Gal promoter, which is conducive to subsequent gene expression. 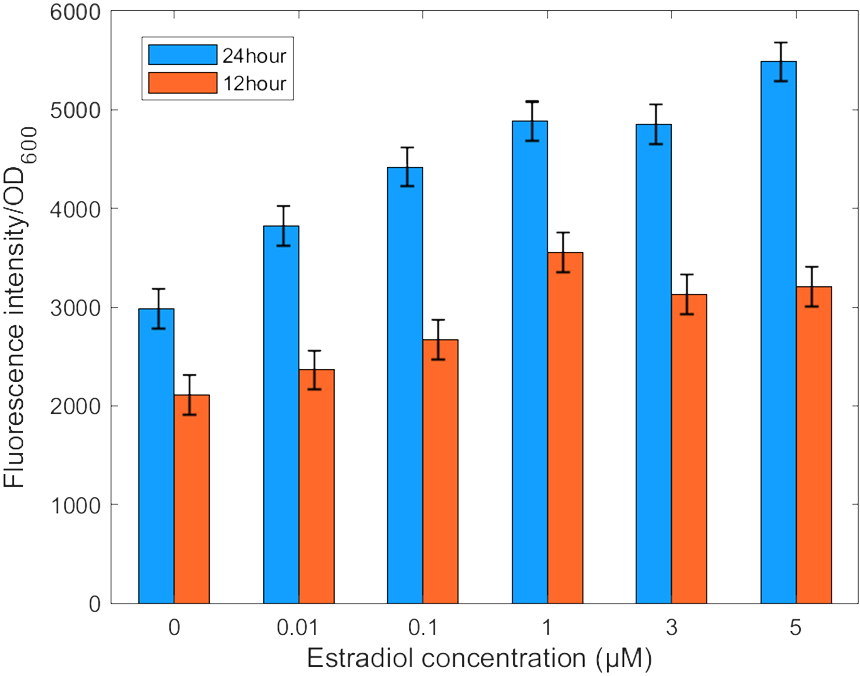 
If you wait for the sample to become cold, The detection is not only time-consuming, but may also change the flavor of the sample. Therefore, we plan to overexpress the PHO3 gene of our strain to improve its heat resistance and make it possible to detect a wider range of samples. Below we will explain in detail how to conduct experiments to verify that overexpression of the PHO3 gene can improve the heat tolerance of Saccharomyces cerevisiae.

Our experiment is divided into two groups, one is the strains that overexpress PHO3 (experimental group), the other is the normal strains (control group), using the same conditions at 37 degrees, cultivation in the environment of 20g/L glucose solution, co-cultivation for 36h, draw the following figure from the measured data. It is not difficult to see that the growth of PHO3 overexpression strains is obviously better than that of normal strains. It can be seen that the overexpression of PHO3 gene has high temperature tolerance for Saccharomyces cerevisiae. Later, we will overexpress this gene in our Saccharomyces cerevisiae strain to make it resistant to high temperatures. 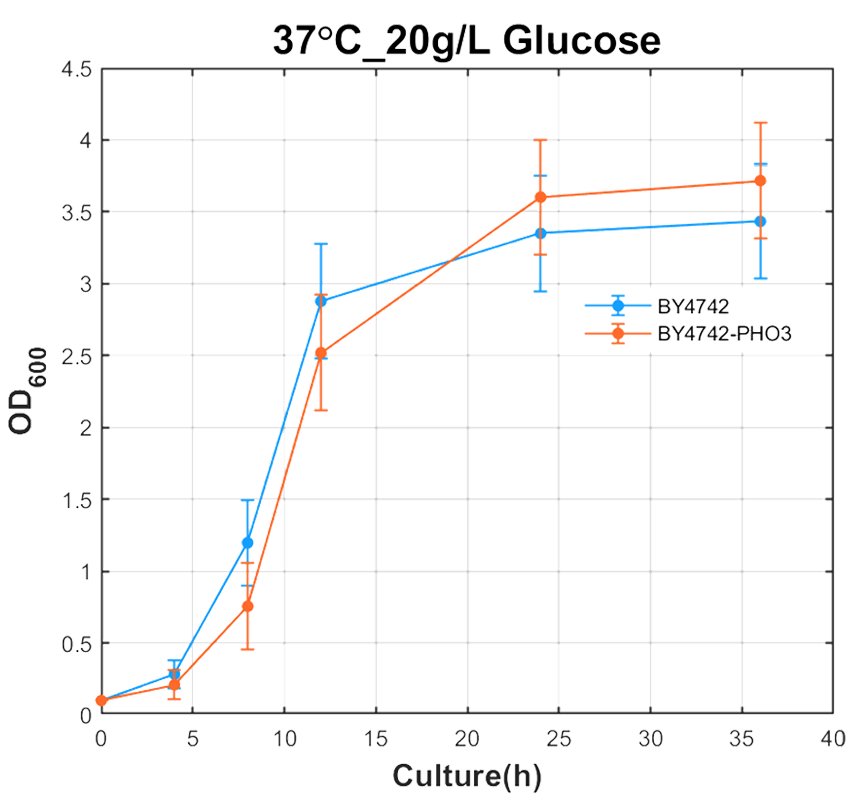