The objective of the project was to contribute to the development of a microbial wastewater treatment system for the detoxification of pharmaceutical waste, especially targeting the non-steroidal anti-inflammatory drug diclofenac (2-[2-(2,6-dichloroanilino)phenyl]acetic acid). The approach was to overexpress and extract three heterologous laccase enzymes in engineered E. coli. Laccases are enzymes which are capable of catalyzing the conversion of diclofenac into less harmful derivatives. The laccases compared in this study were CotA from B. subtilis, CueO from E. coli and Yak from Y. enterocolitica subsp. palearctica strain 7. We were able to successfully produce and purify CotA and CueO, of which CotA was shown to have catalytic activity in vitro.

On this page we will go more in depth on these steps forming the build and test phase of our project (see engineering success). Information about the design phase can be found here.

Construct assembly and generation of the E. coli strains for evaluating laccase function

The genes coding for the three laccases compared in the study, CotA, CueO and Yak, were synthesized by IDT and received in pUCIDT-Kan plasmids. To enable the expression in E. coli BL21(DE3), the laccase genes were subcloned into the pET36b(+) expression vector (NdeI-XhoI) (Fig. 1A). The cotA gene is 1542 bp, cueO 1551 bp, and yak 1602 bp, whereas the pUCIDT-Kan backbone is around 2500 bp, and the empty pET36b(+) plasmid 5248 bp and 669 bp after digestion. Fragments of these lengths were obtained, which verified successful gene flanking design (Fig. 1A). The pET36b plasmid seemed to however only have been partially digested as bands corresponding to the entire plasmid size were also obtained (Fig. 1A). Selection was done through antibiotic selection using kanamycin as both pUCIDT-Kan and pET36b plasmids carry the kanamycin resistance gene.

Figure 1. Agarose gel electrophoresis. A) The digestion products of the pUCIDT-Kan plasmids carrying cotA, cueO and yak, and pET36b(+) expression vector. B) The verification digestions of the pET36b-cotA, pET36b-cueO and pET36b-yak expression constructs. The expression constructs were digested with NdeI and XhoI restriction enzymes. The 1 kb DNA ladder (NEB) was used as a molecular weight standard, the DNA was colored with SyBR Safe DNA Gel Stain (ThermoFisher), and the gel was visualized under UV light. The agarose gel used was 1.2 %.

The laccase genes for the Synechocystis sp. PCC 6803 expression constructs were subcloned from the pUCIDT-Kan plasmids directly downstream of the S3 RBS sequence in the pNiv plasmid (NsiI-XhoI). Since the pUCIDT-Kan plasmid also contained additional NsiI restriction sites resulting in bands of similar size to the laccase genes, BspHI was added to the cotA and cueO digestions and PvuII to the yak digestion. These digestions were successful (Fig. 2A, Fig. 2B).

The combined RBS and laccase gene fragments were then digested from the pNiv carrier plasmid as well as the pDF-lac2 expression plasmid (SpeI-SalI) (Fig. 2C). Subcloning was, however, not completed as work with the generated E. coli BL21(DE3) strains for laccase overexpression was prioritized. 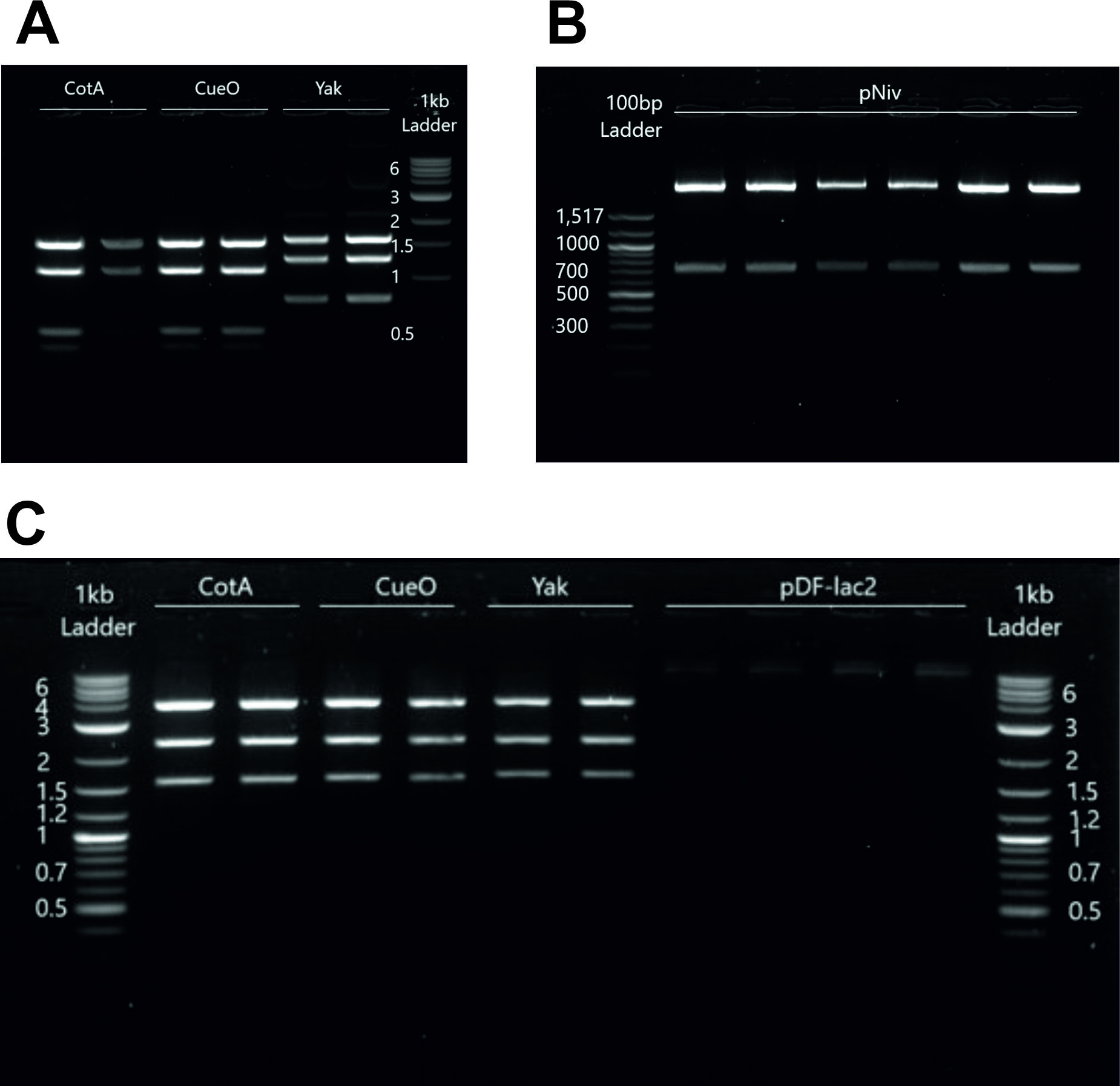 The generated E. coli BL21(DE3) strains were induced by IPTG, the cells lysed by sonication, and His-tagged laccases extracted with Ni2+ affinity chromatography. The purified proteins were analyzed by SDS-PAGE to verify their sizes (Fig. 3). Raw extracts consisted of proteins of all sizes as expected (Fig. 3). SDS-PAGE analysis of purified CotA and CueO enzyme fractions showed clear bands around 60 kDa and 65 kDa, expectedly corresponding to CueO (calculated size 53.75 kDa (Roberts et al., 2002)) and CotA (calculated size 59.23 kDa (Enguita et al., 2003)), respectively, in addition to several minor impurity bands (Fig. 3). As the elution volumes and the sample loading volumes were equal, the intensity of the target bands suggested that the concentration of CueO was approximately two-fold in comparison to CotA. A band corresponding to Yak was not obtained, and hence work with the enzyme terminated. It is possible that Yak was not expressed in soluble form in E. coli and aggregated after expression, or was misfolded and proteolytically degraded. 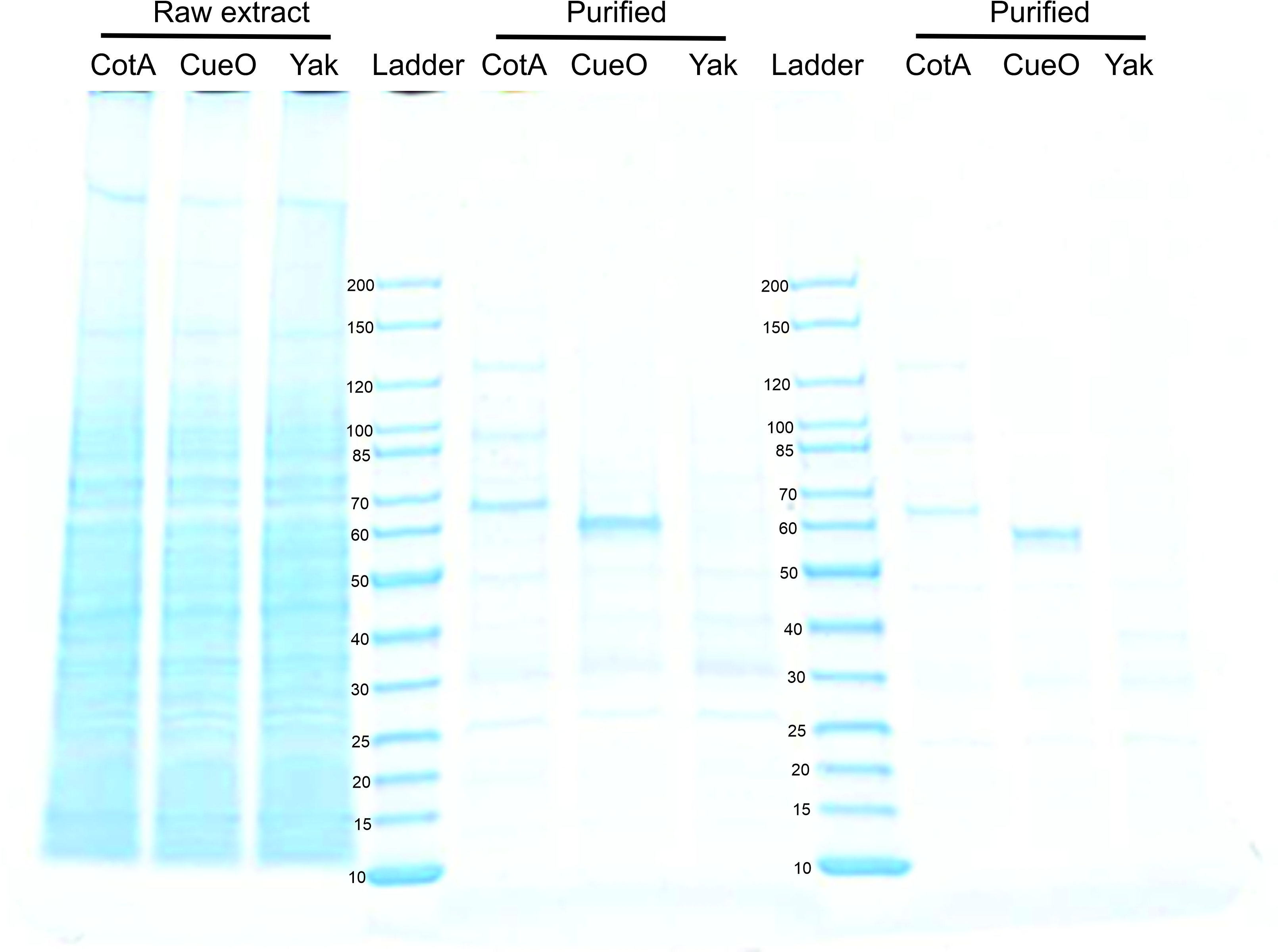 First we tried to observe enzyme activity qualitatively using filter paper that was first soaked in ABTS and then dried before aliquoting laccase on it. The addition of laccase should result in a blue-greenish color. This would have indicated enzyme activity that could then have been studied in more detail quantitatively. The paper was, however, already tinted green after ABTS treatment, and the laccases were found to either decolorize the paper or have no further effect on it, implying that the ABTS was already oxidized before enzyme addition, and thus unsuitable for determination of laccase activity. Instead of wasting time to repeat the unsuccessful qualitative trial, we continued directly to the quantitative kinetic assay.

The ABTS in vitro assay was based on laccase-catalyzed ABTS oxidation, which can be monitored spectrophotometrically as absorbance signal increase at 420 nm. The purified laccase fractions were analysed using three different enzyme volumes (1 µl, 5 µl and 10 µl) and five ABTS concentrations (2 mM, 4 mM, 6 mM, 8 mM, 10 mM) in addition to zero controls, at two different buffer pHs (pH 5 and pH 7). The resulting reaction absorbance profiles were not as anticipated (Fig. 4), and displayed a slight initial signal increase over the first minutes, followed by signal decrease. The profiles clearly indicated that the response was not enzyme concentration -dependent for either CotA or CueO, suggesting that either the enzymes or the substrate were defective. The progress curve of the zero enzyme control, and the control with only buffer, were similar to the actual reaction profiles (Fig. 4B), confirming that there was something wrong with the actual reaction setup. In addition, the ABTS solution was not completely colourless at the beginning but slightly yellow, and did not show proper color change under any condition, indicating that the stock had already been oxidized and possibly further degraded.

Next we decided to test the reaction with an alternative commercial substrate syringaldazine. The reaction is based on substrate oxidation which can be spectrophotometrically monitored as signal increase at 530 nm. The reaction was performed on a 96-well plate using three different enzyme volumes (1 µl, 5 µl, 10 µl), three substrate concentrations (5 mM, 10 mM, 20 mM) in addition to zero controls. The activity of the purified target enzymes CotA and CueO were measured in parallel to a commercial control laccase SAE0050 from Aspergillus SP..

The CueO elution fraction was not active towards syringaldazine, whereas CotA clearly catalyzed substrate oxidation as seen in increasing progress curves (Fig.5). While the signal in the zero enzyme control remained near the baseline (Fig. 5A-B blue line), the progress curve slopes of the enzyme containing reactions seemed to correlate with the enzyme concentrations: Linear signal increase was observed with the different enzyme dilutions and substrate concentrations (Fig. 5A-B). The 20 mM reaction profiles using 5 µl of the CotA fraction were identical between the graphs (Fig. 5A-B green lines), showing that the result was reproducible. The reaction slope of the 10 µl reaction in Fig.5 (purple line) was not as steep as anticipated, suggesting that there may have been difficulties in the sample preparation. The catalytic activity of the positive control reaction with the commercial SAE0050-laccase was unexpectedly high, catalyzing complete substrate oxidation in a matter of seconds, even at the lowest enzyme dilutions. These control reactions did not need to be repeated with lower enzyme concentrations because the activity of the CotA reaction under investigation was confirmed even in the absence of a positive control reference curve.

The reaction series confirmed that the laccase CotA was catalytically active and capable of oxidizing syringaldazine. Therefore, the design of the His-tagged expression construct, over-expression in E. coli, and nickel affinity purification had all been successful.