According to the World Health Organisation, pharmaceutical waste consists of expired, unused, spilt and contaminated pharmaceutical products, drugs, vaccines and sera that are no longer required and need to be disposed of appropriately. Pharmaceutical waste is often hazardous when ending up in nature because pharmaceuticals are synthetic compounds that don’t belong to nature and which are designed to affect in really small concentrations. That fact makes pharmaceuticals usually really dangerous and even lethal to the wild animals of nature when accumulating into their bodies. 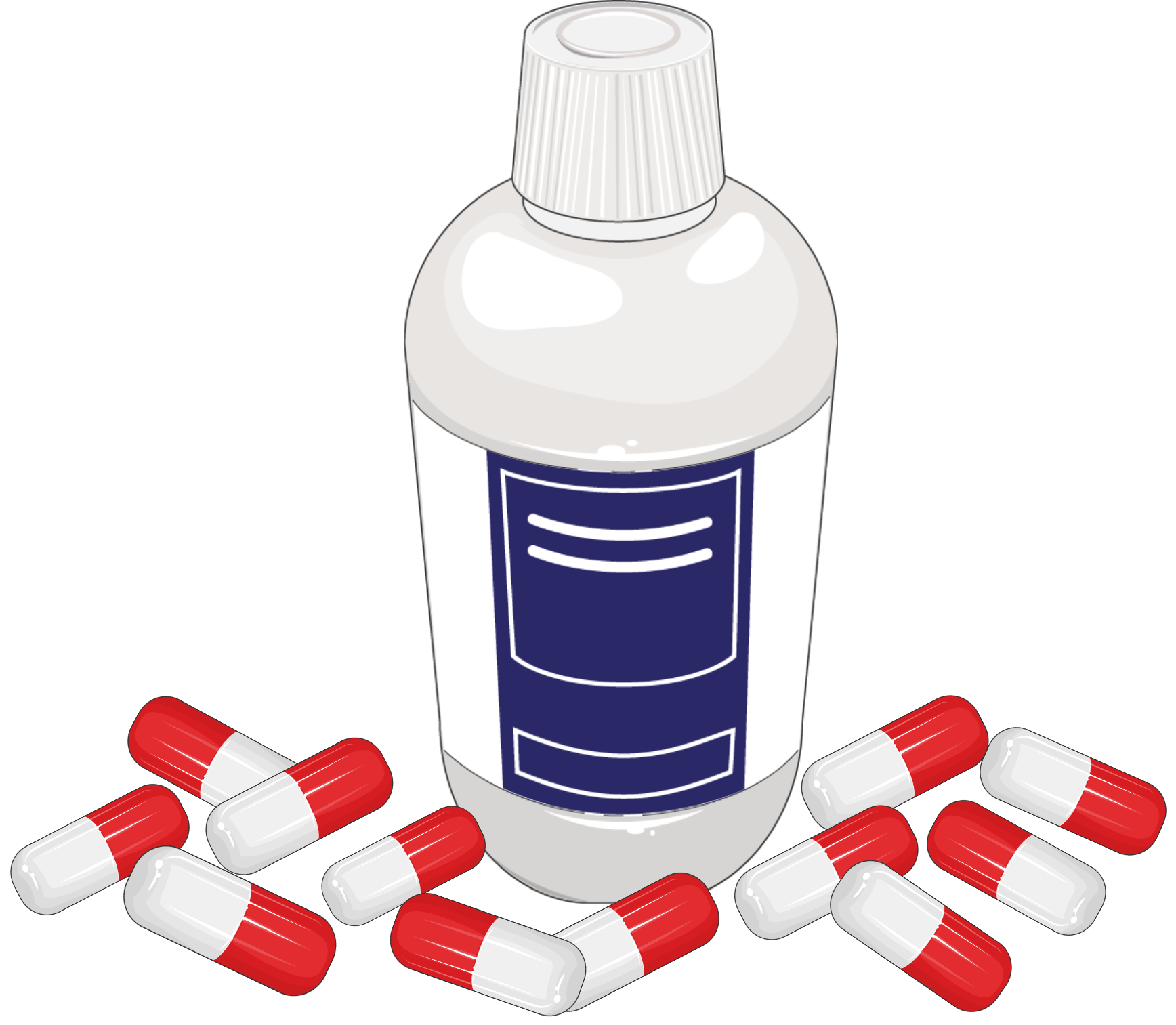 Pharmaceutical Waste in the Baltic Sea

The Baltic Sea is one of the most polluted seas in the world and it has been known for a long time that its biggest problem is eutrophication. Only in recent years has it been realized that pharmaceutical waste has been accumulating for decades in that unique sea causing severe damage to its ecosystem. The Baltic Sea is atypically vulnerable to all kinds of pollutants due to its shallow and isolated nature. (The John Nurminen Foundation.)

The urine and faeces of humans is the most usual route by which pharmaceuticals end up in the Baltic Sea. Another significant source is the unused pharmaceuticals which people throw into sewers or household waste. According to the study of UNESCO and HELCOM (2017), anti-inflammatory drugs or “painkillers”, cardiovascular drugs and central nervous system drugs were most frequently measured in the Baltic Sea. In the same study it was also observed that the removal efficiency of nearly half of the pharmaceuticals was less than 50% in the wastewater treatment plants.

According to the expert we interviewed (read more here), it is hard to investigate the effects of single medical agents to the ecosystem as the organisms are also exposed to many other pollutants and compounds, as well as to low oxygen levels. Still, it’s important to research single effects so that some day in future also their cooperative actions could be known. The effects of pharmaceuticals on ecosystems are due to the conservated targets of medical agents between the species.

The solution to the pharmaceutical waste problem sounds even too easy. If everyone returned their unused and expired drugs to pharmacies instead of throwing them to trash or drain, the problem would hardly exist. According to our local pharmacists, on average about 210 litres of drugs are returned to single pharmacies every week. There is still a lot to improve - especially when it comes to pain relieving gels and for example inhalators used for the treatment of asthma. Read more about the valuable information we got from our local pharmacies here.

From the pharmacies the pharmaceutical waste is transferred to the central factory of hazardous waste in Riihimäki, Finland. There the waste is burned in extremely high temperatures (i.e. 1300 degrees Celsius) and the slag is further delivered to utilization. In addition, the resulting energy can be gathered to be used in district heating. The waste containing mercury, iodine or bromine has to be separated from other pharmaceutical waste before sending it to the factory of Riihimäki. (Hyvönen, 2016.)

Diclofenac as an Example of Pharmaceutical Waste

Diclofenac or 2-[2-(2,6-dichloroanilino)phenyl]acetic acid is a nonsteroidal anti-inflammatory drug (NSAID) which is used in both human and veterinary medicines. Diclofenac is one of the most used NSAIDs in the world and it is an over the counter drug (Lonappan et al., 2016). When it comes to human use in Finland, diclofenac is maybe known best as an active ingredient in very popular pain relieving gels. 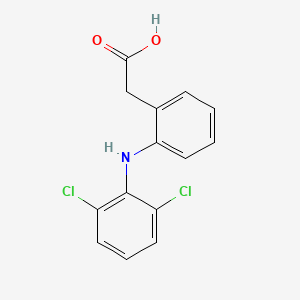 In some countries, such as in India and Pakistan, the use of diclofenac in veterinary medicine is forbidden. The reason for this is historical; in 1990-2000 the vulture populations in Pakistan almost died off because of diclofenac. Vultures ate livestock which had been medicated with diclofenac-containing drugs. It was observed that vultures were extremely vulnerable for diclofenac and it caused severe and lethal renal failures to them. (Oaks et al., 2004.) Because of this incident, diclofenac is nowadays also not used in veterinary medicines in most countries in the Baltic Sea region and its possible adverse effects for the environment are taken into account also when used in human medicines (Undeman, 2020).

Diclofenac is often used in topical gels and consequently, it gets metabolized considerably less than oral forms of it. Topical gels also flow straight into drains when showering or simply washing the hands. In that way the significantly bigger amount of diclofenac gets into the wastewater than when it comes to other, orally ingested pharmaceuticals. Diclofenac is a pseudo persistent pollutant which means that the concentrations of exposure in the environment are low but the exposure is continuous. Because of the slow exchange rate of water in the Baltic Sea, diclofenac can accumulate there for a long time.

In 2014, 77 250 kg of diclofenac was used in the form of pain relieving gels in Finland and 845 kg of it ended up in the bodies of water (see the picture). For comparison, in the same year 117 825 kg of ibuprofen was used while only 130 kg of it ended up in water. For paracetamol the numbers were 194 685 kg and 630 kg. (MarineFinland.) When looking at these numbers, it’s clear that something is wrong when it comes to removing diclofenac during wastewater treatment processes. 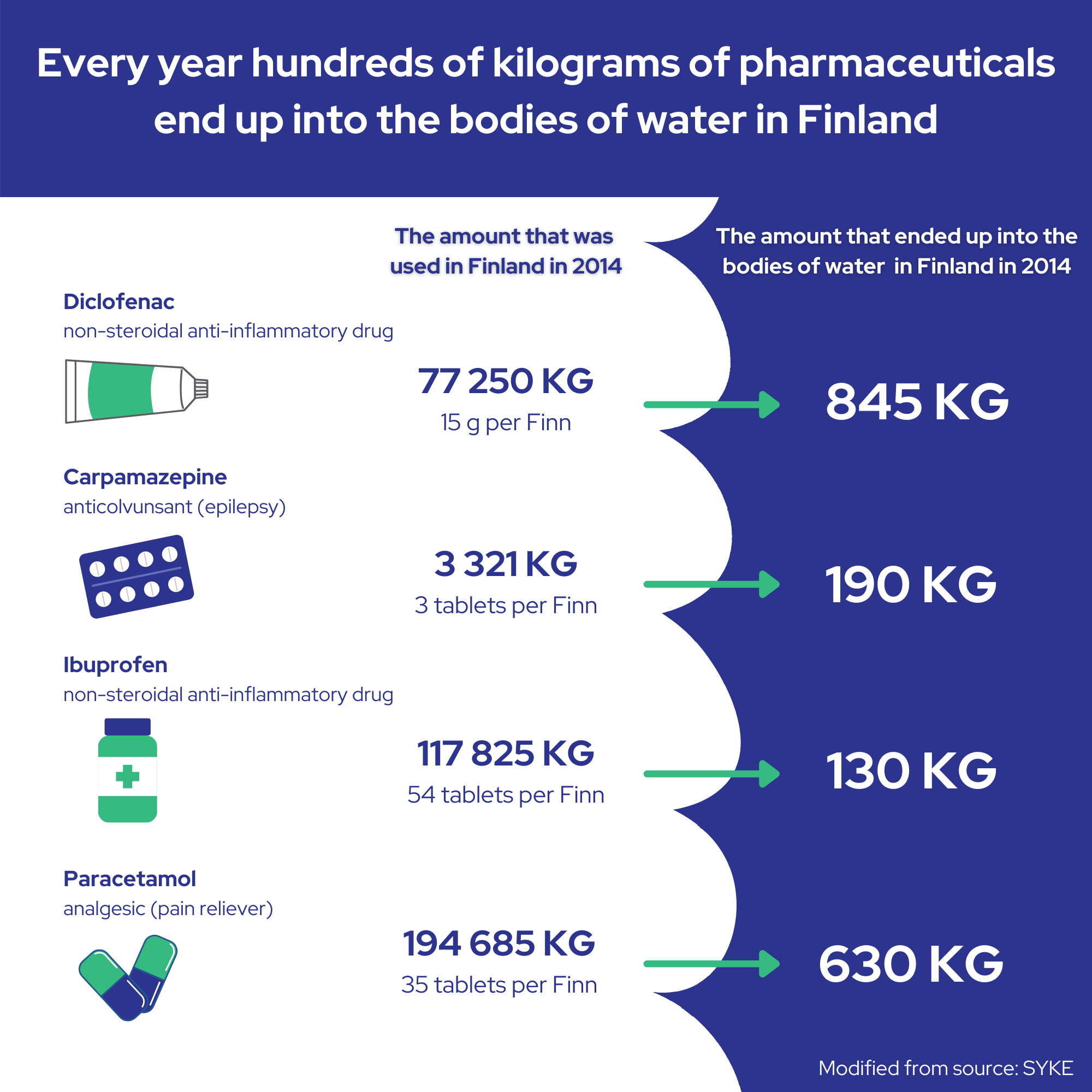 When getting into the environment, diclofenac causes damage for example for fish and mussels but the mechanisms are yet poorly investigated. It has been shown that diclofenac, among other things, damages renal and gastrointestinal tissues of fish - even lethally. Tissue damage has also been observed in mussels (Lonappan et al., 2016.). One reason that has been suggested to be behind these phenomena is the changes in different metabolic enzymes. For example, it has been previously shown that diclofenac can induce the transcription of the cytochrome P450 1a (CYP1a) enzyme and inhibit the lactate dehydrogenase (LDH) enzyme. Consequently, diclofenac has been proven to impair the ability of fishes to survive in hypoxic conditions. (Prokkola et al., 2014.) In addition, diclofenac can possibly damage fish eggs and embryos and it accumulates in fish and mussels for a long period of time (Vieno & Sillanpää, 2014). According to Prokkola (the expert we interviewed; read more from here), the accumulation leads to remarkably high concentration of diclofenac in tissues although the exposure would be considerably low.

Diclofenac as an environmental pollutant is not a problem only in Finland but nearly all of the countries around the Baltic Sea. According to the report of the County Administrative Board, diclofenac is among the few pharmaceuticals that pose the highest risks for the environment in the Baltic Sea (Ek Henning et al., 2020). It is also on the Directive 2013/39/EU watch list of pharmaceuticals that need to be monitored in all countries of the European Union (UNESCO & HELCOM, 2017). According to the study of CWPharma (the project Clear Waters from Pharmaceuticals), the highest amount of diclofenac in the Baltic Sea region comes from Poland. The next highest emissions are from Finland, Sweden and Latvia. (Äystö et al., 2020.)

Pharmaceuticals are crucial to human health and their consumption will never be forbidden. Thus, we have to come up with solutions to prevent them from getting into vulnerable water ecosystems.