The OptoReader was developed to address the gap in potential optogenetic experimentation and current lack of methods to stimulate and monitor cells simultaneously in a high-throughput manner.

Current methods for optogenetic experiments are low throughput, disruptive to cells, and inefficient. At the moment, optogenetic stimulation is often achieved within bioreactors that can only illuminate cells with one pattern of light at a time. Additionally, every time a reading of optical density or fluorescence emission is required, a researcher must disrupt the stimulation pattern to either transfer a well plate to a plate reader or analyze a few cells at a time under a microscope. There is no current method to test multiple light patterns in a high-throughput manner while performing real-time monitoring of cell states. This greatly limits the scope and scale of current optogenetic experiments. For example, identifying optimal stimulation patterns, assaying effects of stimulation on cell growth, or measuring rates of responses are often difficult or impossible. We sought to overcome this limitation with our project.

The OptoReader is an affordable, open-source device that couples optogenetic stimulation with real-time fluorescence and optical density measurements, allowing for 96 programmable parallel experiments. Consisting of two printed circuit boards (PCBs) for light stimulation and cellular readout, the OptoReader is able to meaningfully impact the way synthetic biology research is carried out through optogenetics.

We combined a light-stimulating PCB (OptoPlate) that fits on top of a 96-well plate with a plate reader PCB (PlateReader) that sits below the 96-well plate to create a single device that stimulates opto-tools and can monitor fluorescence and optical density in real-time. We will go in to the details of what each board contains below. 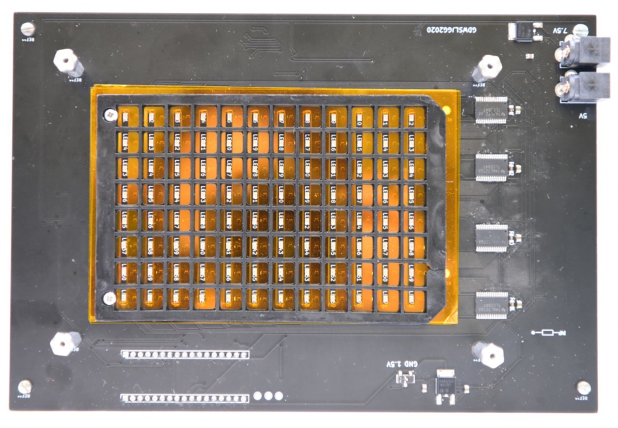 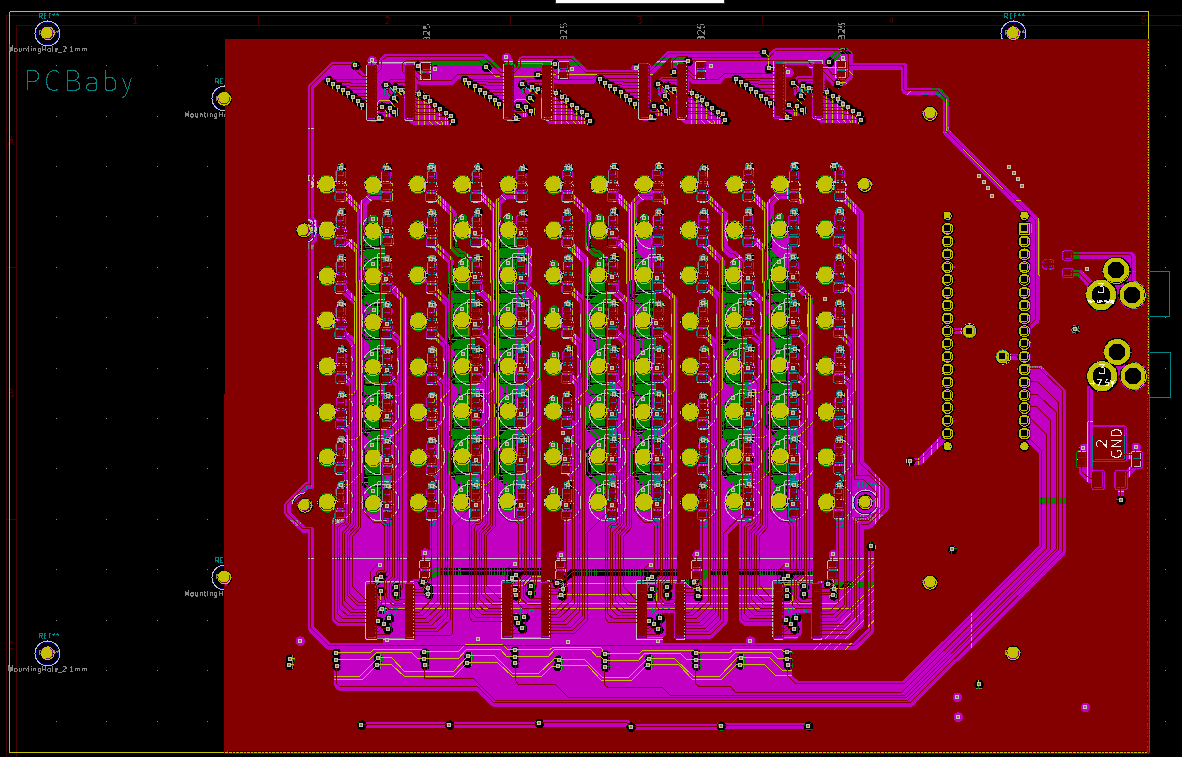 The PlateReader functions to take optical density and fluorescence readings with one photodiode per well. Each well also contains a fluorescent protein excitation LED.

Each fluorescence excitation LED on the plate is connected to one of four LED drivers. An LED driver provides the electricity needed to power an LED. A single driver is able to control 24 different LEDs. Therefore the entire plate requires four drivers to supply power to each of the 96 LEDs. An LED driver has the ability to regulate the current and voltage that is supplied to the LED. This ensures that the LED has a consistent voltage applied to it so that its light does not flicker. Additionally, the LED functions to regulate the amount of current that is applied to the LED. This allows for the LEDs to have their light output intensity customized individually. Each LED driver is connected to a capacitor and a resistor in order to modify the current draw of the component and to facilitate a steady current flowing through the LEDs.

The entire board is controlled by an Arduino Micro, a microcontroller, from software on the connected computer.

We employed two methods of reducing light noise to ensure the clearest signal for our photodiode readings. First, we selected photodiodes with a narrow spectrum of detection. Acting as a band-pass filter, the photodiodes chosen read wavelengths between 480-660nm. This spectrum ensures we are able to detect optical density readings from the OD LED that emits at 600 nm, as well as detect fluorescence emission from excited fluorescent proteins (the mAmetrine fluorescent protein emits at 526nm). Moreover, the photodiode minimizes light noise from the excitation LED and stimulation LED which are outside of its spectrum. However, to further ensure that the photodiodes are not detecting unwanted wavelengths, we experimented with adding a physical filter - a thin film of acrylic that acts as a high-pass filter with a cutoff at 480 nm and lower. This blocks the excitation LED at 395nm while still allowing the OD LED to remain unfiltered. 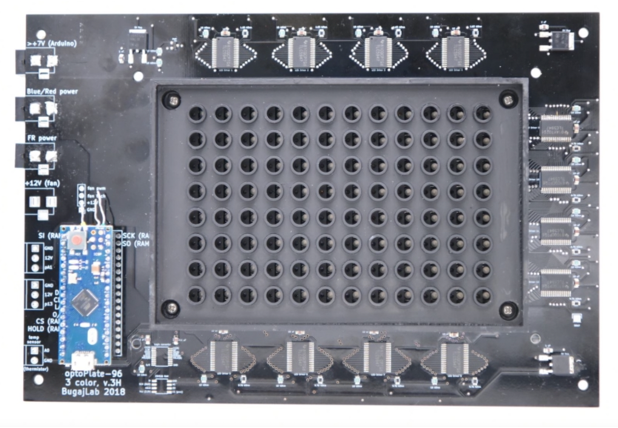 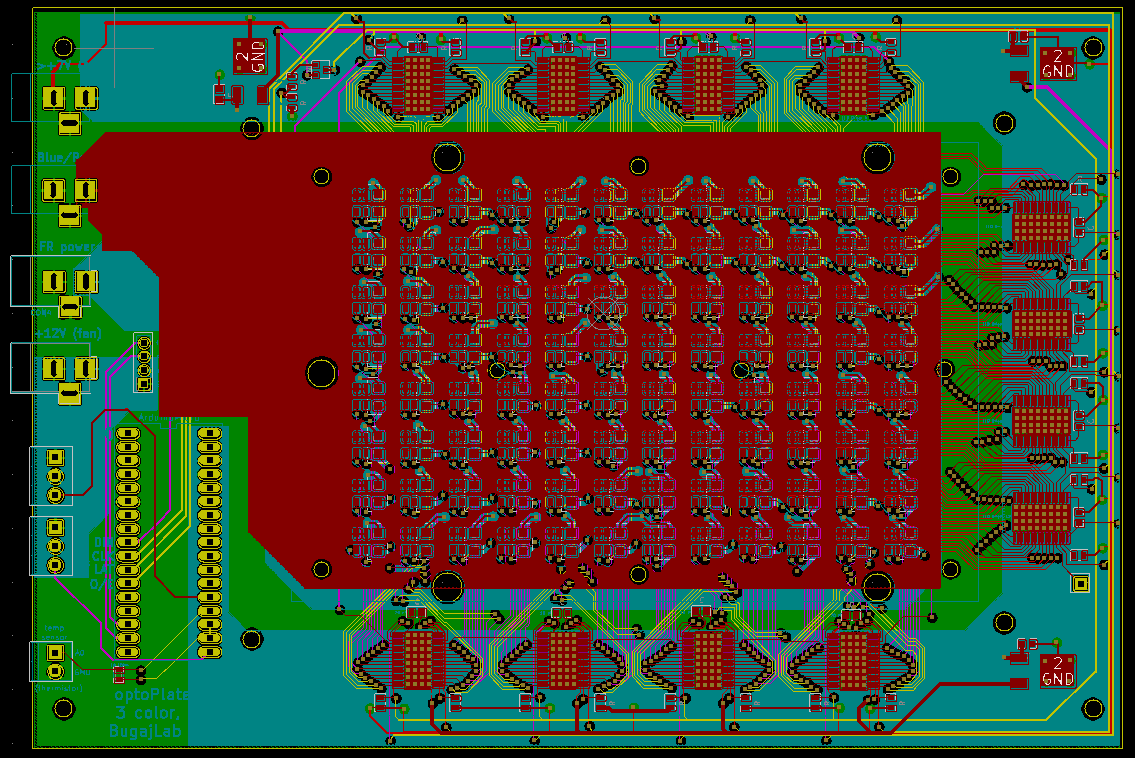 The optoPlate-96 (Bugaj and Lim, 2019) functions to dynamically stimulate cells in unique patterns with opto-tool stimulating LEDs. We added a 600nm LED to the board to take optical density readings with a standard OD600. By combining light stimulation with the PlateReader, we have a device that can run robust optogenetic experiments to quickly and efficiently study opto-tools.

The stimulation LED is chosen at the wavelength that activates the opto-tool of choice. We began with blue LEDs which is a common stimulation light color. The intensity of this LED can be adjusted, as can the time it is on and off. By adjusting these parameters, different light patterns are achieved that are used to study different opto-tool responses. We also added a red LED in response to consulting other iGEM teams who are using red-light induced opto-tools. With this board, a range of opto-tools can be stimulated by merely selecting the stimulating LED accordingly.

The OD LED emits at a standard wavelength of 600nm to minimize interference caused by cell media. The attenuation of the OD LED through the wells that is picked up by the photodiode beneath the plate gives us information on cell density and thus optical density. This is a crucial component of the device that brings it up to par with industry standard plate readers.

The entire board is controlled by an Arduino Micro, a microcontroller, from software on the connected computer.

Two adaptors are required to fit a 96-well plate with the OptoReader. The top adaptors screws onto the OptoPlate and is designed so that each circular rim fits inside each well on the plate to prevent movement and splashing between wells. The bottom adaptor screws onto the PlateReader and is designed to fit inside the edge of the well plate to prevent the plate from moving laterally on the board. 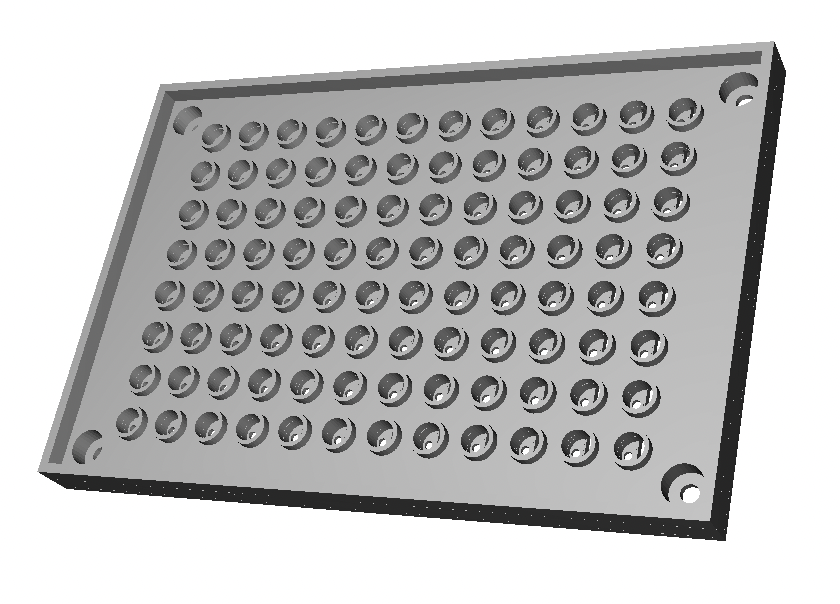 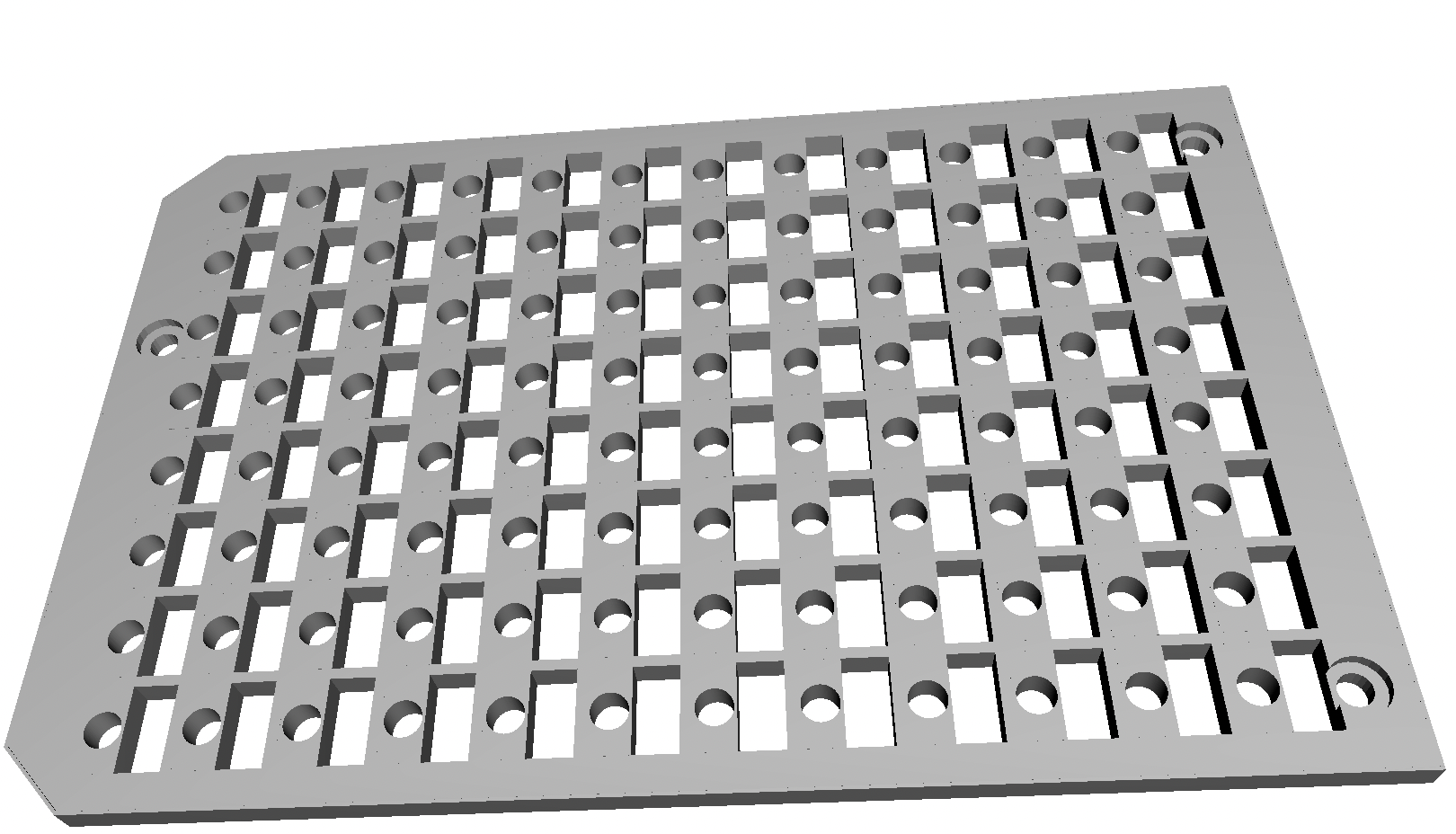 In this section you will find links to download the KiCad files for the optoPlate-96 PCB and PlateReader PCB, as well as a description of the components required for the boards.

The OptoReader technology is robust, novel, and allows researchers to broach a new frontier in optogenetic experimentation. Moreover, the OptoReader hardware is open-source and simple to use due to a Graphical User Interface designed specifically for users to simply and efficiently program up to 96 different simultaneous protocols for stimulation of opto-tools.

In this video, the user is using the Graphical User Interface (GUI) to program different protocols that will stimulate cells at different intensities and light doses. We first see the illumination pattern, showing the stimulation LEDs. Then, we see the excitation LEDs in the UV range take readings for all 96 wells on the PlateReader. Lastly, we see the OD LEDs on the OptoPlate illuminate for the photodiodes to take Optical Density readings for all 96 wells.

To ensure that OD readings were consistent between wells, we needed to calibrate the OD LEDs with the device. Each LED brightness was calibrated to the average of all 96. By adjusting the intensity that the Arduino would set for individual LEDs, we observed a 10% decrease in relative standard deviation. Although not yet implemented, we plan to utilize the same calibration process on the stimulation and fluorescence excitation. 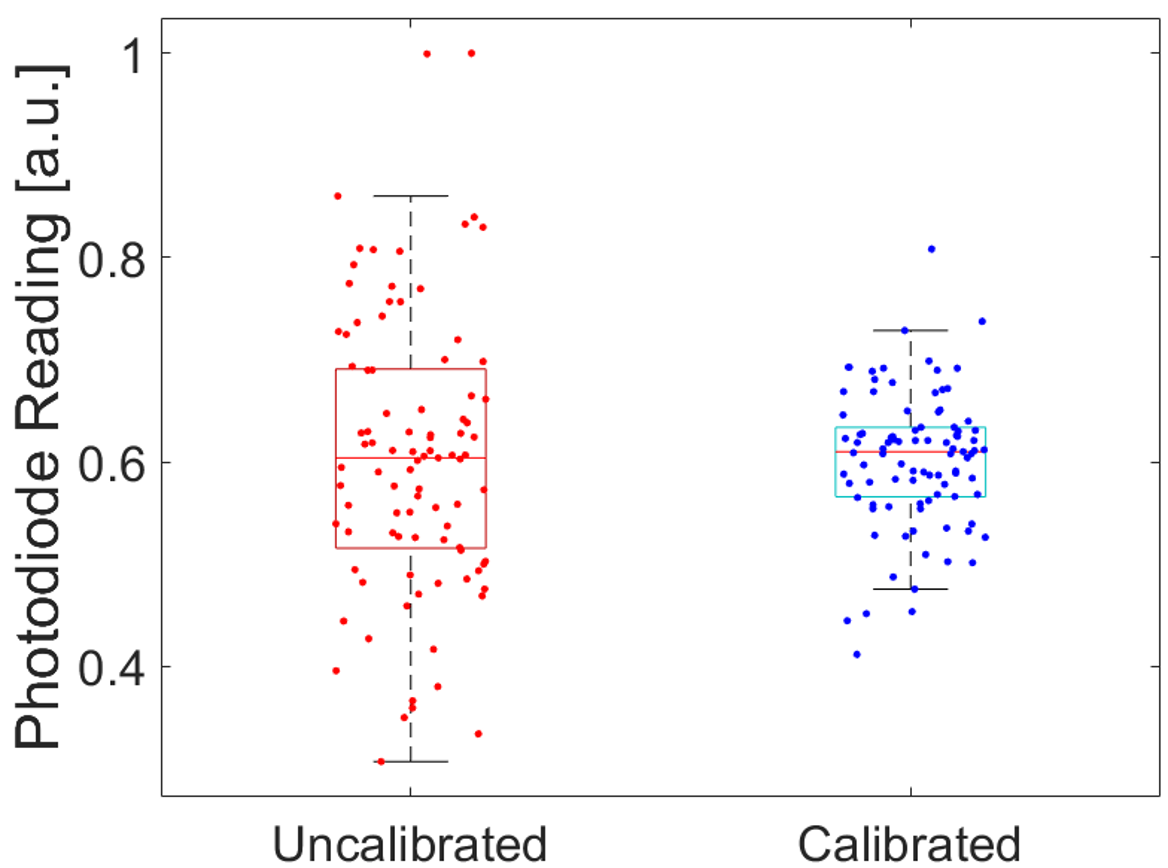 Preliminary characterization of our device for biological experiments can be found in Proof of Concept.

We want to highlight how the OptoReader compares to current, industry standard plate readers. Using the log of light transmission to calculate Optical Density in the same way as a Tecan, we saw a linear relationship between OD readings from the OptoReader and the Tecan Plate Reader above an OD > 0.1. This shows that we can obtain OD measurements at biologically significant optical densities. 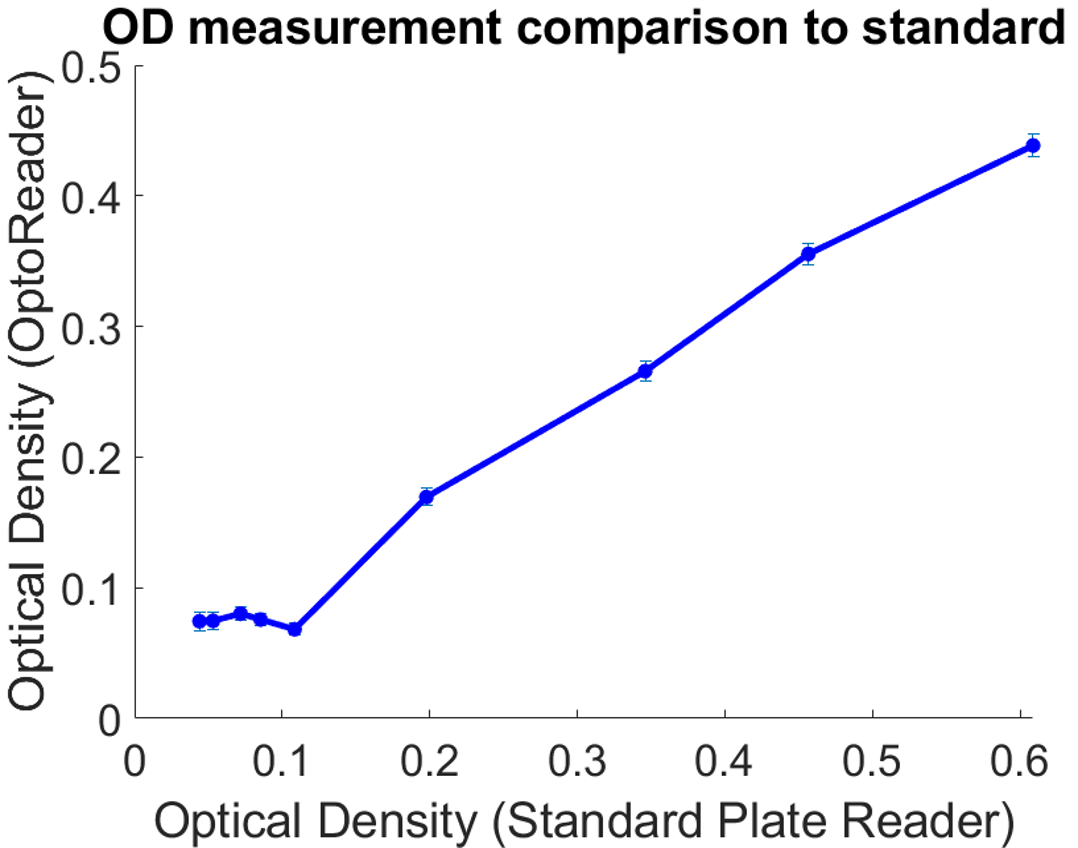 To further confirm that the OptoReader will be useful for optogenetic experiments, we conducted our own experiments with the light repressible transcription system pDusk. This construct transcribes the fluorescent protein mAmetrine in dark conditions and represses transcription in light conditions. We saw successful activation and suppression of the optotool in the dark and light conditions respectively.

These results show that our device can grow, stimulate, and detect a fully constructed optogenetic system, allowing researchers in synthetic biology to harness optogenetics in entirely novel and high-throughput ways.

Does our hardware address a need or problem in synthetic biology?

The potential to control biological systems with light - optogentics - is a field within synthetic biology with huge potential. Currently, many optogenetic experiments are conducted in a way such that the stimulation of cells cannot be conducted simultaneously with the analysis of the cells in a high-throughput manner. This means that light simulation time courses must be interrupted everything time a reading needs to be taken. Moreover, disruption occurs when taking the cells from the LED fitted bioreactor to a plate reader. Moreover, there is no way to consistently monitor cells and adjust stimulation accordingly. The OptoReader addresses the gap in simultaneous stimulation and reading by combining the two functions into one device. It also addresses the current low-throughput data by being engineered in a 96-well format with rapid readings. However, it also introducing a whole new methodology for optogenetic experimentation via feedback functions to progress the field of synthetic biology and optogenetics in novel ways.

Did we conduct user testing and learn from user feedback?

Absolutely! The design for our OptoReader has gone through multiple hardware iterations based on user feedback. Users noted that would like to use this devices in a shaking incubator. Therefore, we added screw holes to the PCBs so they could be securely fastened to shaking platforms.

Users often found it difficult to directly program the Arduinos embedded our device. Therefore, we created a Graphical User Interface (GUI) which allows the device to be programmed with ease.

In our discussions with other iGEM teams, we learned that several experiments would benefit from a red LED to stimulate red light sensitive optotools. Therefore, we incorporated a red LED into the light stimulation LEDs so that users can choose between stimulating with blue or red light.

Were we able to demonstrate utility and functionality in our hardware proof of concept? ?

Yes! To test the robustness of our device, we conducted several overnight experiments growing and stimulating bacteria in an incubator while shaking. In these experiments, we demonstrated that our device could optogenetically stimulate and detect fluorescence/OD of live cultures. These experiments also supported the ability for the device to be shaken and put in an incubated environment for extended periods of time while sustaining its functionality. The overnight experiments also helped test the ability for living organisms to grow inside the 96-well plates. Originally, there were issues with evaporation of media from the wells due to the high temperatures and small liquid capacity in 96-well plates. These issues were resolved by humidifying the incubator with a beaker of water ensuring the adaptors for the 96-well plate were sealed. We show this data in Proof of Concept

Is there sufficient documentation of the hardware system for other teams to reproduce the device?

We provide all software and files required to manufacture and run our device. Links to the KiCad files used to manufacture of the PCBs, 3D printed adaptor parts, and the software packages are found on our GitHub along with documentation of their function in the README file.