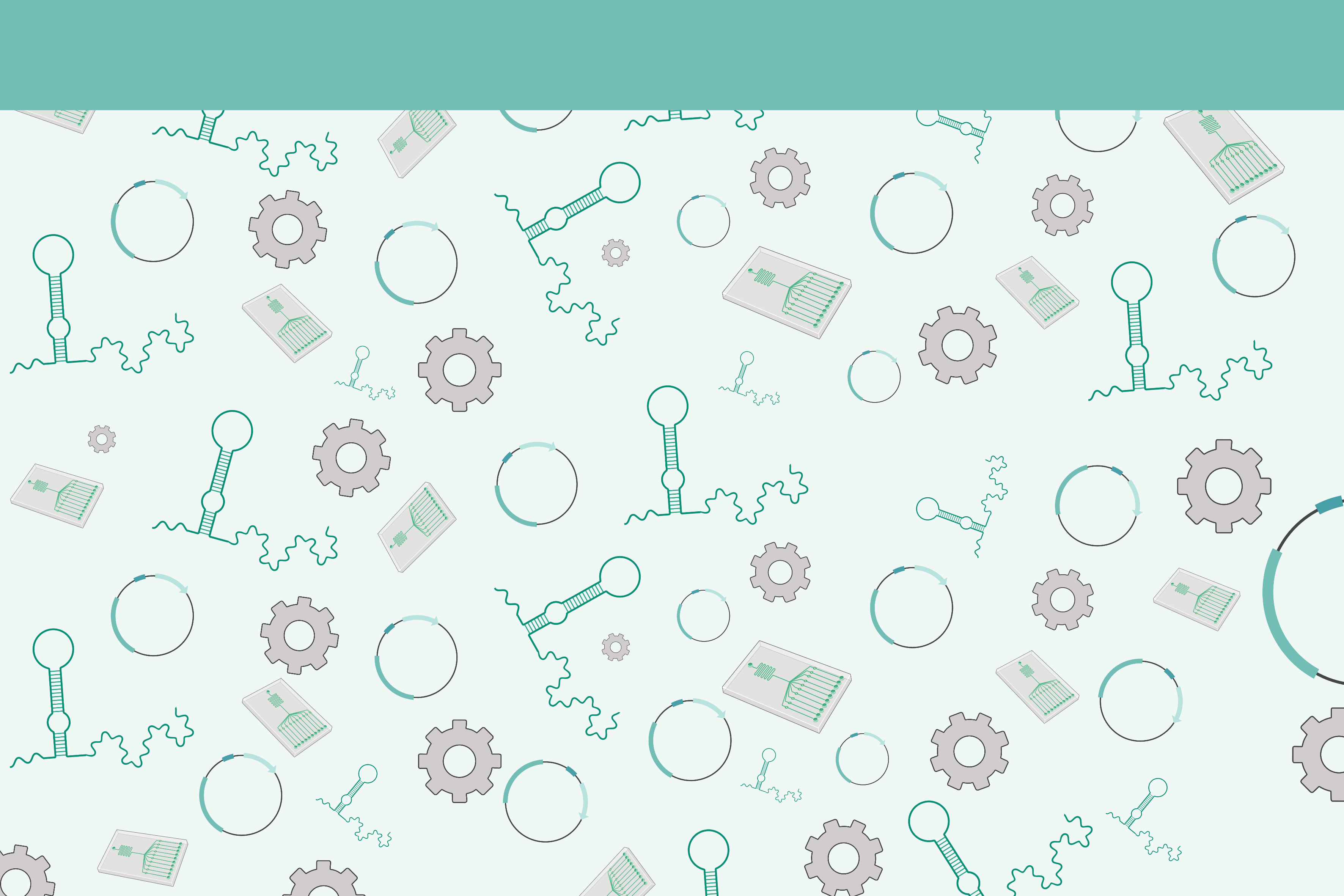 Our project ExoSwitch aims to create a diagnostic tool to detect and quantify blood exosomal miRNAs using de-novo-designed riboregulators, toehold switches 1. Previous research highlights that cancer cells express abnormal quantities of exosomal miRNAs 2-3, we hypothesized that these exosomal miRNAs could serve as biomarkers of cancers easily accessible. To quantify these miRNAs, we have decided to adapt the toehold switches, a synthetic biology tool developed to detect long RNAs. For our proof-of-concept, we aimed to assess the specificity and sensitivity of toehold switches for oncogenic miRNA markers extracted from cancer-derived exosomes. Our strategy consisted of quantifying these miRNAs using our toehold switches and, for comparison, the gold standard method that is Polymerase Chain Reaction. We wrote a script, named SwitchMi Designer, to model a bank of toehold switch candidates targeting specific miRNAs. We finally used three different methods to produce these toehold switches.

We modeled a bank of de-novo-designed riboregulators, toehold switches, targeting specific miRNAs using our SwitchMi Designer. We defined the miRNAs we wanted to detect and quantify according to the literature, and we obtained a bank of toehold switch candidates for 6 miRNAs.

We verified the toehold switch candidates' MFE structure and free energy using RNAfold web server. Thus, we selected the candidates with the expected MFE structure and favorable free energy (higher when the toehold switch is not linked with the miRNA). We decided to focus only on the detection of 2 miRNAs, miR-21-5p and miR-141-5p that are commonly overexpressed in cancers.

Since the designed Toehold Switches are roughly of 900bp (counting the repressed gene GFP), we first decided to produce them with a PCR-based synthesis of DNA sequences also called Splicing for Overlap Extension PCR (SOE PCR). SOE PCR illustrated on Figure 1 consists in the amplification and progressive elongation of the starting piece of DNA (GFP in our case) with the help of constant forward primer and variable overlapping reverse primers (oligonucleotides) (Figure 1: forward primer in yellow and backward (bw) primers in red). Adding one forward and one type of reverse primers per PCR reaction we observe splicing of the starting piece of DNA with the sequence “brought” by a reverse primer. The result of each SOE PCR reaction can be verified with an electrophoresis gel through comparing the molecular weight of the product with the weights of the control DNA pieces (starting DNA piece, and all the pieces obtained during the previous SOE PCR cycles).

Figure 1. Schematic representation of the SOE PCR technique. The set of primers (in red) consists of three overlapping sequences of nucleotides able to contribute to the synthesis of the target DNA sequence (green+blue) after three cycles of SOE PCR. Green piece of DNA taken as the starting sequence (GFP in our case) is elongated during each cycle (in the 5’-->3’ direction) after a primer’s fixation thanks to the activity of the specific PCR enzymes (TaQ polymerase in our case)

The SOE PCR method has been regularly used by the research team that provided us with a working space in the laboratory. Thus we were able to draw inspiration from their protocols as well as from the protocols described in such papers as Ai-Sheng Xiong et al. 20064, TerMaat et al. 20095.

We found that 3 reverse primers (of the average length 20-50bp) would be sufficient to synthesize the whole Toehold Switch sequence. The team of our supervisor Pierre Nioche provided us with the DNA sequence encoding for eGFP, thus we took eGFP as the starting DNA piece for the SOE. After designing and ordering the primers we dedicated 1.5 months of wet lab work to testing the technique. Please find the results following the link.

We used two different molecular cloning methods, one with restriction enzymes and the other one with golden gate assembly. Molecular cloning defines the insertion of a DNA fragment, called insert, into a vector such as a plasmid. In our case, the newly created plasmid is introduced into Bl21(DE3) and selected using antibiotic resistance (Fig.3).

Figure 3: Scheme of our strategy developed to build the bank of toehold switch candidates. Firstly, we engineer a plasmid encoding for GFP followed by a T7 terminator. Secondly, we assemble the variable part of the toehold switch preceded by a T7 promoter into the previous plasmid. Toehold Switch is then transcribed via T7 RNA polymerase.

We first built a plasmid encoding for the repressed protein of the toehold switches, GFP (Fig. 4) using the EcorI and XhoI restriction enzymes.

We achieved the ligation step between digested GFP insert and digested pET-24d(+) using NEB T4 ligase as described in the protocol below. We then introduced the plasmid (containing the part BBa_K3878000) into E.coli 10-BETA to amplify it.

Golden gate assembly is an in vitro molecular cloning method used to assemble several inserts into a plasmid. This method is based on type IIs restriction enzymes and overhangs compatibility6-7. Type IIs restriction enzymes have the ability to cut DNA outside of their recognition sites and to generate overhangs. This method is used to assemble multiple inserts into a plasmid using sequential or simultaneous activities of a single Type IIS restriction enzyme and T4 DNA ligase. We designed the variable part of the toehold switch targeting human miR-21-5p to overlap with the overhang of the plasmid BBa_K3453101 and BsaI recognition site. Evry iGEM team kindly gave us the part BBa_K3453101 which is a plasmid engineered for Golden Gate assembly using BsaI as a restriction enzyme. This plasmid contains GFP and the T7 terminator.

The synthesized variable part of the toehold switch was amplified into E. coli 10 BETA. Plasmids were then extracted from bacteria cultured in liquid TB media using BioBasic EZ-10 Spin Column Plasmid DNA Miniprep Kit. The variable parts of the toehold switch were amplified via PCR technique to raise the quantity of insert as in the protocol below. Synthesized inserts are then amplified via polymerase chain reaction (PCR). We followed the protocol given by NEB® Golden Gate Assembly Kit (BsaI-HF®v2) for the assembly of one insert. (Fig. 5)

We used a medium based on DMEM +10% of FBS for cell culture and phosphate-buffered saline (PBS) to wash the cells and remove the dead ones. Due to the cell adhesion on the interior surface of the flask, we used trypsin to detach them and later resuspended them in the medium. This technique is used to grow the targeted cell line until we reach good confluency (between 80-90%). Cells were regularly tested negative for mycoplasma contamination, and no contamination was detected.

We were able to perform exosomes extraction from the media when the cells were at 90% of confluency after 6 passages for MCF-7 cells and 3 passages for HeLa cells culture. The exosome extraction method is based on differential centrifugations with different levels of intensities going from 2000 xg to 100.000 xg rpm in order to remove each large component (“contaminations”) and isolate the exosomes. We performed BCA (BiCichondinic Assay). Western blot experiments were performed to determine whether we succeeded in our exosomal preparation test using detection of markers of exosomes, CD9 and CD63, and one negative control, calnexin.

To confirm the abnormal quantity of exosomal miRNAs secreted from cancer cells, we extracted RNA from the HeLa and MCF-7 exosomes using the Invitrogen™ Total exosome RNA and protein isolation kit. RNAs were isolated from HeLa cell exosomes by mixing the sample with a denaturation solution, Acid-Phenol, and 100% ethanol to lyse the exosomes followed by a number of centrifugation rounds and the addition of a washing solution in order to separate our RNAs from all other contents of exosomes. Finally, we had the RNAs in 100 µl of free nuclease water.

To quantify miRNA-21-5p and miRNA-141-5p from exosome extracts, we did a quantitative reverse transcription assay by using a kit (Takarabio) Mir-X™ miRNA FirstStrand Synthesis and TB Green® qRT-PCR10. First, miRNAs were tagged with PolyA tails at their 3’ end using the previous kit to lengthen the miRNA sequences that are originally too short for qPCR. We designed specific primers to detect miR-141-5p, miR-21-5p, and miR-34a (due to their absence in HeLa exosomes). qPCR was done on one exosome extract from HeLa cells and 4 conditions are tested: miR-34a (negative control), U6 (Takara’s kit control), miR-21-5p, and miR-141-5p. In order to have a Cq (quantification cycle) measure to compare with our samples, we replace cDNA in the mix with H2O. Cq is the number of cycles required for the sample to cross the threshold line (the background fluorescence intensity). This value is inversely proportional to the quantity of RNA, which means a low value of Cq indicates a high quantity of RNA. The aim of this study is to detect miRNA in the exosome, it will be reflected by sample Cq inferior to the water Cq.