As part of the broader educational package, we’ve developed a board game called ‘Blue Expanse’. It is designed to be played by 2-5 players, and is targeted at players of ages 12+. The main objective is for each player to build their own model of a healthy reef ecosystem, based on the Great Barrier Reef, in the face of various environmental challenges. These simulate contemporary issues with a focus on pollution and rising sea temperatures, and their effects on the complex interactions which allow for the proper functioning of the reef ecosystem (Welle et al. 2017). 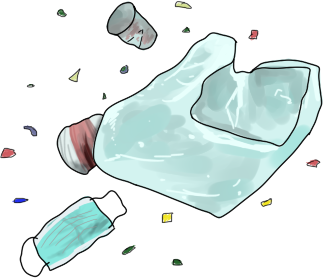 The ecological food web is a complex concept to comprehend; when understanding how the impact of one species can have such a withstanding effect throughout the community. However, it is an important one, as it helps individuals understand the severity of coral bleaching. Another important aspect to the health of the ecosystem that is also crucial, is the impacts of society on the ecosystem as a whole (Welle et al. 2017). As such, the educational board game we have constructed allows an interactive and tactile method of learning of these key ideas.

For instance, we have integrated the mechanism of rising temperatures, causing oxidative stress and eventually in reality coral bleaching (Nielsen et al. 2018). Whilst the game does not show directly that oxidative stress leads to the expulsion of zooxanthellae from coral, it allows the players to appreciate the widespread damage that can result from a proportion of their coral lacking the zooxanthellae symbiont. In doing so, we hope to express the significance of these issues in an entertaining and accessible way.


Each player manages their own reef, across three different periods facing worsening ecological challenges, culminating in a mass coral bleaching event. These periods represent varying stages of human technological development, and corresponding human interaction with the reef. The initial stage represents a pre-industrial level of development, with the primary threat being overfishing. This initial stage eases the players into the game, allowing them to set the foundations for their reefs. The second stage introduces the pollution mechanic, which introduces a persistent threat to the health of the reef, balanced by the risk and reward of investing in development of industry around the reef. The pollution mechanic affects players individually, and directly forces players to remove animals according to the level of pollution present.

The third stage presents the greatest challenge with the introduction of the rising temperature mechanic. In ‘Blue Expanse’, the rising temperature mechanic primarily prevents zooxanthellae from attaching to coral, preventing coral from performing its role as a producer or place for shelter, disrupting the food chain. It is like the pollution mechanic in its persistent nature; however, it also affects the reefs of all players universally. This highlights the need for greater co-operation in the face of the final event, simulating a mass bleaching event, after which victory is determined. Victory is determined by the sum of final victory points (VP) each player has, with the player scoring the most being the winner.


The board game is inspired by other roll and move games, like Monopoly, and deck building games such as Dominion. It involves resource management, with elements of competition and co-operation mixed in to encourage greater interaction between players. Each player has their own deck which consists of two types of currency: Biomass and Capital. Biomass can be used to acquire cards from the ‘Biomass’ deck, representing the animals which make up the reef, and cards from the ‘Resource’ deck, which primarily represents the autotrophs and coral upon which the reefs are built. The animals are divided according to their niche, whether they are herbivores, detritivores, predators or filter feeders. The players spend their first stage primarily managing the interaction between these niches. This introduces the idea of trophic levels and food web interactions, especially when paired with ecological facts embedded in the cards and manual.

Biomass Cards PDF
We would like to acknowledge that the drawings for the board game have been constructed using inspiration and references from photographs on the public domain.

Capital can be exchanged for ‘Humanitarian’ cards, which represent the anthropogenic interactions with and around the reef. These tend to have both positive and negative results, encouraging players to balance the need for building their own economy with the aforementioned negative results of pollution and rising temperatures.

Between these two are the Bonus and Malus decks, derived from the Latin words for ‘good’ and ‘bad’. The cards from these decks tend to provide temporary effects.

Players interact with these decks by moving around the board, then interacting with the cards and decks which correspond to the tiles they land on. The movement of the tokens around the board also plays a role in determining the stage of the game. When any player first completes a complete circumnavigation of the board, the game progresses from the initial stage (representing pre-industrial development) to the second stage (representing the challenges associated with an industrialising society). This progression is marked by shuffling in the cards associated with that stage into the pre-existing Humanitarian and Bonus-Malus decks. When any player completes their second circumnavigation of the board, the game progresses to the third stage and the decks on the board are further expanded.

An example of the board, setup with the decks, with tokens for four players is shown below. Note that each player will have their own currency deck to draw from, and their own play area with their respective reefs. 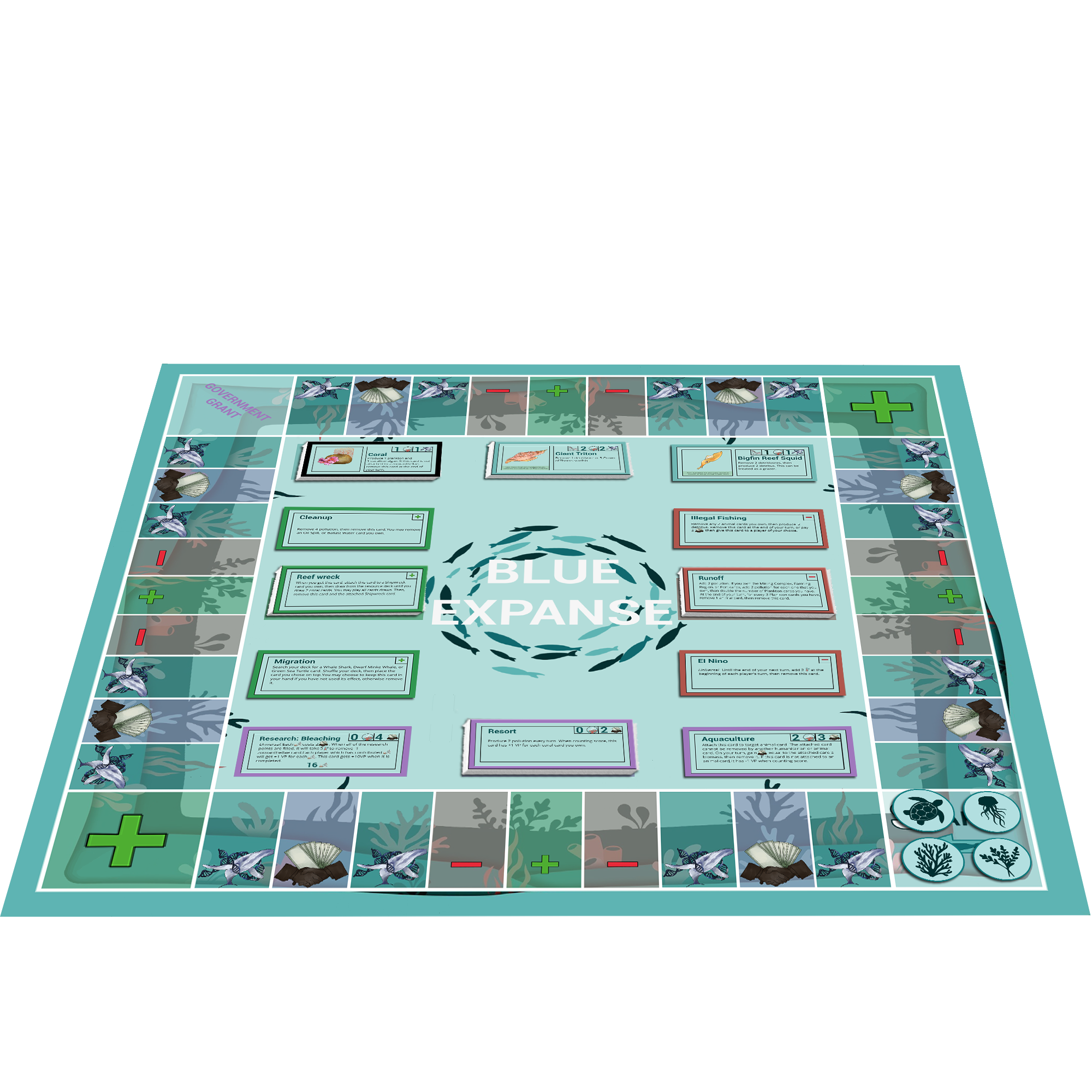 Ultimately, the interactions within the simulated reef and between the players managing them should help spread awareness of the complex interactions underpinning this ecosystem as well as the issues currently threatening them. The game also shows some of the potential ways research can be used to improve the robustness of reefs and will hopefully encourage more people to think about the ways they have an impact on the environment around them.


A PDF version of the game has been provided, which can be printed on A4 and cut out to play at your own leisure. This has been adapted for the COVID-19 pandemic, in hopes to educate and entertain families during these times. Download the Game Manual and Print at Home Game Board PDF.


To ensure understanding of some key ecological terms, a glossary has been provided as part of the package; as seen below:

Apex predator: A top predator of a food web. Their importance lies in providing ecological stability, controlling the abundance of prey in the ecosystem.

Benthic: Occurring at the bottom of the marine environment

Detritivore: An organism that feeds on detritus (waste and dead material).

Ecosystem transformers/Transformer species: Species that change the structure of the environment around them to suit their needs, which then impact other species

Habitat: The home of another organism

Herbivore: Organisms which feed on producers, such as sea-grass

Keystone species: An organism that plays a significant role in an ecosystem, more than other organisms

Niche: The specific role the organism plays in an ecosystem, for instance a day-time herbivore is in a different niche than a night-time herbivore.

Photosynthesis: The process where ‘producers’ use sunlight to make energy (food) in the form of sugar

Producers: Organisms that make their own food

Symbiont: A organism with a close and long-term relationship with another, such as, a coral and their algae symbiont

Trophic levels: The position in a food chain. For instance, the first trophic level are plants or autotrophs which produce food and nutrition for the whole food web.