The St Andrews iGEM team aims to develop a probiotic, sustainable sunscreen called ‘Shinescreen’ that poses no harm to the marine environment. Instead of containing the toxic, coral-degrading chemicals found in many commercially available sunscreens, our product will make use of shinorine: a natural, non-toxic, UV-protecting compound already produced by a number of marine organisms. In the end-product, Shinescreen will contain Nissle 1917 E. coli bacteria that have been engineered to overproduce shinorine, such that when these (non-pathogenic, FDA approved) bacteria are applied to the skin, they confer UV-protection to the consumer.

Last year’s Phase I team spent their summer designing the genetic circuits that would enable the Nissle 1917 E. coli bacteria to overproduce Shinorine: a link to their work can be found here. In summary, their team designed both a Shinorine-producing system, as well as the Thanogen kill-switch (the Thanogen would kill the bacteria once UV protection was no longer required for the user).

Shinorine is a UV-A protecting molecule that is already produced naturally by marine organisms such as red algae and cyanobacteria. In Anaebaena viriabilis (a species of cyanobacteria), the pathway responsible for shinorine-production involves four genes: these are Ava_3858, Ava_3857, Ava_3856 and Ava_3855. These four genes code for the following four enzymes respectively, DHQS, O-MT, ATP-Grasp and NRPS, and have been previously successfully expressed in E. coli (Balskus and Walsh, 2010).

In the shinorine-producing pathway, a substrate called sedoheptulose 7-phosphate (an intermediate in the Pentose-phosphate pathway) is taken up via DHQS, before undergoing a series of reactions to produce shinorine as the end-product of the pathway.

During Phase 1 of our project, last year’s St Andrews iGEM team took the four gene sequences for this pathway and used the IDT codon optimisation tool to amend them for better expression in E. coli. These codon-optimised sequences were made to a biobrick standard last year.

In terms of inserting the shinogen parts into the chassis, the Phase I team decided that the shinorine-producing genes should be inserted into plasmids, rather than the bacterial chromosome. While the genes would be integrated more stably if they were in a chromosome, this chromosomal integration would result in a much lower expression of shinorine in comparison with the integration of these genes into a plasmid. Moreover, the use of plasmids would enable our team to select ones with suitably high copy numbers (reflecting our team’s requirements of producing high levels of shinorine).

Moreover, the Phase I team thought that the Shinogen genes should be expressed constitutively, as this would further maximise expression of the proteins involved in the shinorine-producing pathway. This would maximise shinorine production, which would prove beneficial in terms of providing maximum sunscreen protection to our consumers. An additional constraint was also developed to control bacterial growth itself (rather than the expression of shinorine) by varying degrees of light intensity, so that sunscreen protection could only take place in the presence of light. This was where the kill-switch became important.

The kill-switch component (also named ‘Thanogen’) was designed by last year’s team as a means of safeguarding against horizontal gene transfer (HGT) of our team’s genetic constructs to other skin microbes, as well as the escape of the bacteria into the surrounding environment (this being any environment other than the skin surface). Under their design, the kill-switch relied upon a toxin-antitoxin module system, and two factors were responsible for determining the survival of the bacteria on the skin: these were glucose availability, and the presence of sunlight (i.e. light intensity). Theoretically, when the concentration of toxin is higher than the concentration of the antitoxin, the bacteria end up being killed following the expression of an mf-Lon protease (which leads to bacteriostasis) and a nuclease (which chops up the DNA, thus preventing horizontal gene transfer). 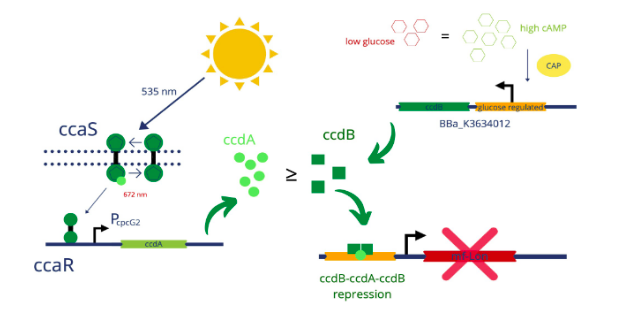 The overall genetic circuitry designed by the Phase I team last summer was rather extensive and complex, so our Phase II iGEM team decided very early on that we wouldn’t be able to implement both the shinorine-producing system and kill-switch system into our E. coli strain of choice, and subsequently also test for expression and UV protection, as we only had 10 weeks of access to the labs. As a result, our team decided to work on the Shinogen component since this system was much more straightforward and easy to understand theoretically. Specifically, we aimed to clone the four genes of the shinorine-producing pathway into plasmids, transform those plasmids into E. coli cells, and then hopefully achieve expression of the four proteins involved in the shinorine-producing pathway. If we were lucky thus far, we would then try to get our bacteria to actually produce shinorine, and finally test our bacteria on its UV protecting abilities.

While our wetlab team decided to place our main focus on the Shinogen this summer, we still intended to begin exploring the viability of the kill-switch parts that last year’s Phase I team had designed.

During our first four weeks in the lab, our Phase II wetlab team spent time researching the bacterial strains and plasmids that we wanted to use throughout our project, optimising our genes for successful manufacturing by IDT, designing primers, and ordering and waiting for laboratory supplies to arrive.

In terms of the bacterial strains we choose for our project, our Phase II team initially hoped to use Nissle 1917 E. coli cells. Carrying out laboratory experiments on these cells would have been optimal for our project, since the Nissle 1917 E. coli was our strain of choice for our end-product, as these bacteria are FDA-approved and probiotic, meaning that they would theoretically be safe for application onto human skin. If we had carried out laboratory testing on these cells, we would be much closer to understanding how well these cells act as a chassis to our genetic circuitry.

With regards to the plasmids, it turned out that last year’s team’s proposed plasmids (pSB3B1-DOPH and pSB3E1-AN) were actually theoretical designs rather than existing plasmid vectors. Our phase II team therefore decided to find physical plasmids that matched or had a similar general structure to the plasmids designed by last year’s team. With the advice of our supervisors, we managed to find two suitable, compatible plasmids that could be supplied to us by other technicians and researchers in the university: these were pETDuet-1 and pRSFDuet-1. Each of these Duet plasmids had two individual cloning sites with their own promoters, ribosome binding sites, and terminators, which was perfect for us as we had exactly four genes that we wanted to insert into our plasmids. Each of these plasmids also had protein tags which would be a great help to use in conducting protein expression and purification experiments in the laboratory.

For our genes, they had already been codon-optimised by last year’s team in order to improve expression in E. coli cells. However, the genetic sequence for NRPS was edited slightly this year to ameliorate its ease of manufacture by IDT. Before editing, a stretch of the sequence starting at base 1111 had too many guanine bases next to each other. All of the other Shinogen gene sequences were found to have low manufacturing difficulty scores, and they could be synthesized though IDT with no significant challenges, hence they were not edited at all.

In terms of the experiments we conducted during our time in the lab, our team cultured bacteria, and carried out PCR experiments, Gibson Assembly and bacterial transformations. Our team also quantified DNA using the NanoDrop spectrophotometer, carried out agarose gel electrophoresis, and sent DNA for sequencing. For further, more detailed information about our laboratory work over the summer, please refer to our notebook.

During phase II, we had initially aimed to clone our four genes into plasmids, transform these plasmids into BL21 E. coli cells, and finally test for the expression of the enzymes of the Shinorine-producing pathway. In practice, achieving such progress proved more difficult than expected! There were many occasions during our time in the lab where DNA amplification, Gibson Assembly, or transformation proved less successful than we had hoped, and there were also occasions where honest mistakes delayed our progress quite significantly (for example, on one occasion our freezer got switched off over the weekend, which meant that we had to re-order supplies such as restriction enzymes to continue carrying out our experiments).

By the end of our time in the lab, our team had managed to successfully clone ATPG, the initial gene in the Shinorine-producing pathway, into the pETDuet-1 plasmid using Gibson Assembly. Cloning the other three genes proved difficult, because we had many issues with our PCR optimization trials.

We also attempted to transform the pETDuet-1_ATPG plasmid (i.e. having ATPG successfully inserted in it) into BL21 E. coli cells multiple times, however each time none of the plates spread with transformed BL21 cells had any colonies growing on them following overnight incubation. It was initially thought that the BL21 cells we were using were viable rather than competent, hence our team sourced a different batch of competent BL21 E. coli cells from researchers at our University and repeated the transformation procedure. However, even after using the same transformation protocol that proved successful for other groups working with the same new batch of BL21 E. coli cells, we did not manage to transform the pETDuet-1_ATPG into our expression strain. By this time, our time available in the lab had come to an end, so our team did not managed to figure out the reason(s) for the failed transformations. However, our team is confident that, if we had more time available to us to carry on our laboratory research, our team would be able to clone the other three genes into their respective pETDuet-1 or pRSFDuet-1 plasmids, work out the reasons for failed transformation, and subsequently transform our cloned plasmids into BL21 E. coli expression cells.