A novel delivery system for the treatment of obesity

The most significant our results in the lab. Let us show you our first cloning strategy: 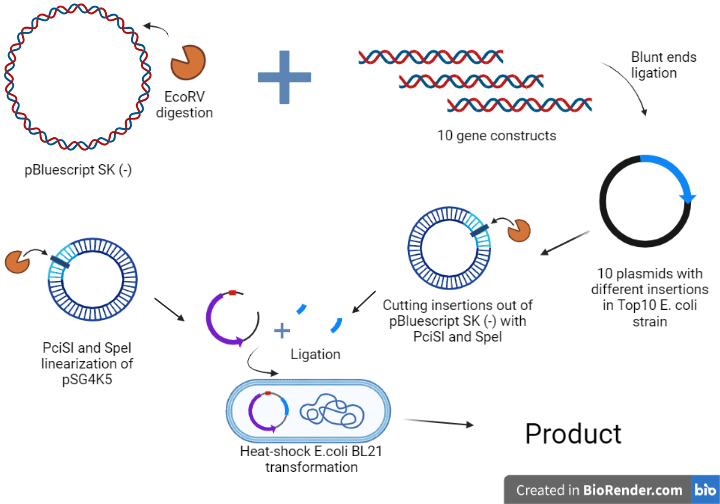 We have successfully cloned all 10 constructions: coding YebF with and without LMWP and 4 pairs with different secretion tags. We needed YebF to study how LMWP would influence the bacterial secretion, for YebF is known to be secreted by E. coli K12. The results were further verified by sequencing – it showed no critical mistakes. However, we then faced a problem with extracting enough DNA for the restriction digestion and gel purification. It was just the moment when our collaborators came up with the idea of using high fidelity PCR to obtain our insertions in required concentrations. Great idea, but did it mean, that all we had done before was in vain? One may say: “That intermediate vector cloning was a laborious mistake, you shouldn’t have done it!”. But look at benefits we gained from it:

We have successfully cloned all 10 constructions: coding YebF with and without LMWP and 4 pairs with different secretion tags. We needed YebF to study how LMWP would influence the bacterial secretion, for YebF is known to be secreted by E. coli K12. The results were further verified by sequencing – it showed no critical mistakes. However, we then faced a problem with extracting enough DNA for the restriction digestion and gel purification. It was just the moment when our collaborators came up with the idea of using high fidelity PCR to obtain our insertions in required concentrations. Great idea, but did it mean, that all we had done before was in vain? One may say: “That intermediate vector cloning was a laborious mistake, you shouldn’t have done it!”. But look at benefits we gained from it: 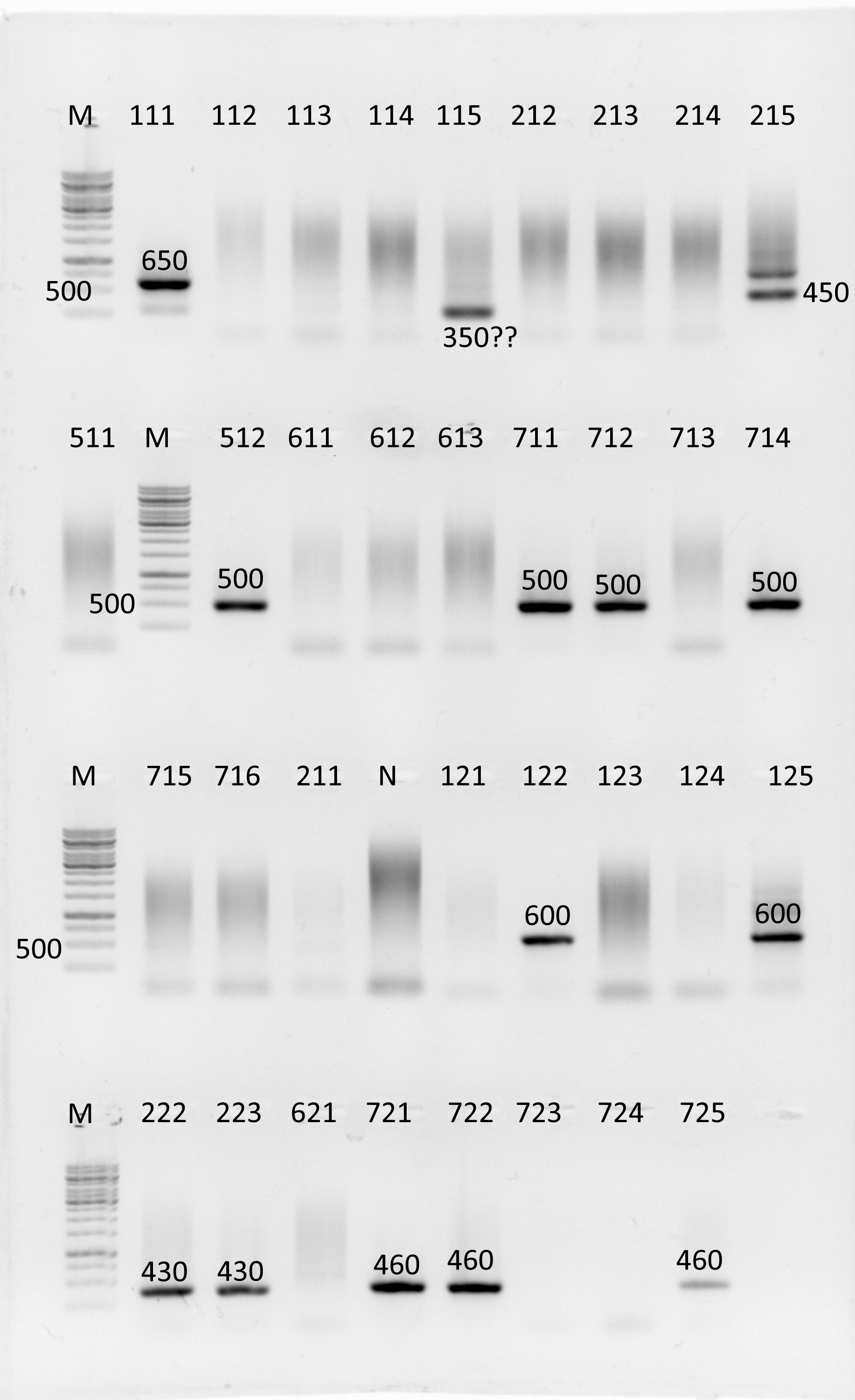 A successful colony PCR result. The number here is a colony code, and the length is given for those bands, that has the expected length 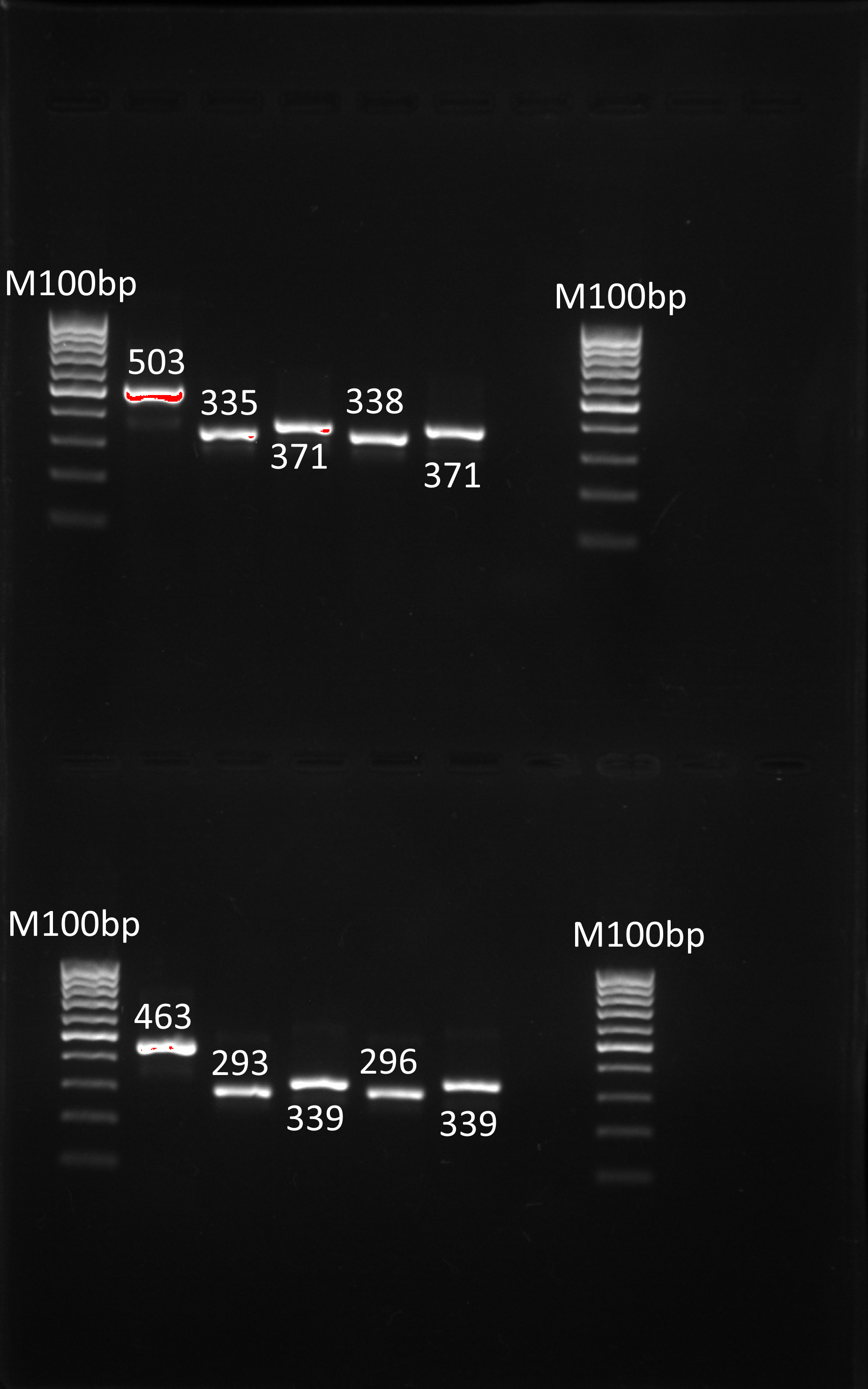 High fidelity PCR results with all constructs having expected length 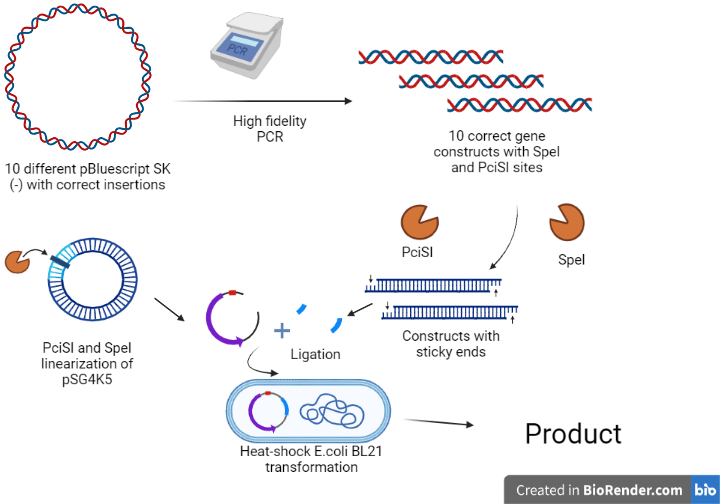 What problem did we face here? Each transformation resulted in zero positive results (PCR colony), but weird bands at 300 and 400 bp. What was our troubleshooting pathway? 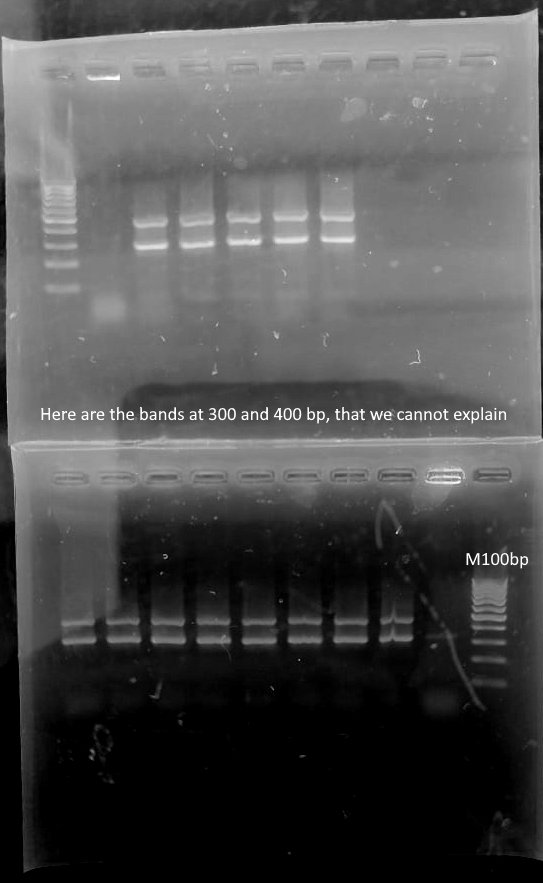 Surprisingly, we have discovered the length was just the same, which meant that restriction had failed. But we had performed a control for both of the enzymes. 5 U each was sufficient to linearize 1 μg of pSG4K5 vector. The problem was somehow connected to our gene constructs. Prof. N. V. Tikunova advised us to do ethanol precipitation of the genes DNA – she said, that the kit, we had used to purify the DNA after the PCR might inhibit further enzymatic reactions. The effect was due to residual cations from the spin column membrane, she explained. We did the precipitation and saw the fragments were cut! 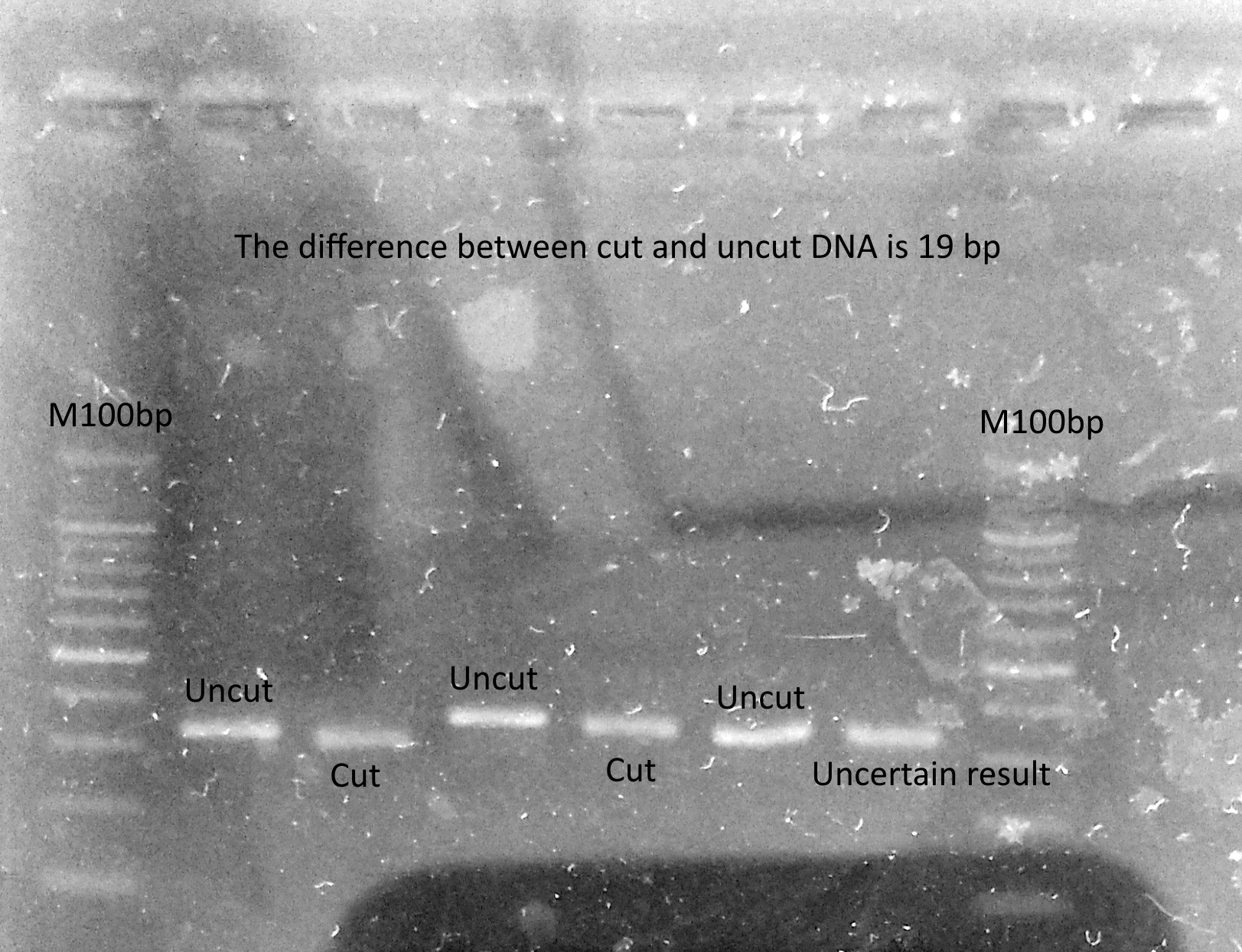 Unfortunately, it was not the only reason of transformation problems: after doing the transformation once again we still received those weird bands. For now, we have not enough time to properly understand them, but here, is the list of possible explanations:

And the list of actions to be taken to understand what has happened:


It seems we still have plenty of work to do, however we already have a plan for further troubleshooting. And we are not going to stop in the middle.

As our project is a proof-of-concept, combining the idea of living therapeutics and nose-to-brain delivery of macromolecules, ideally we need to model and test both of these aspects. Originally, provided we demonstrated secretion of the LEAP2 fusion protein from bacteria, we were planning to move straight onto in vivo murine models to measure the success of N2B delivery using immunohistochemical techniques. Needless to say, at the time we were also concerned with the ethical aspect.

For a more comprehensive analysis, we would have first tested the delivery of the purified fusion protein, using a protocol such as the one used by Hansen et. al., 2013 [1]. Only under the condition that this step worked, would we have considered moving on to actually planting the modified bacterium into the nose (ideally not the E.Coli we used to demonstrate the secretion of our protein, but a native bacterium found in the microbiota of the nose (i.e. Neisseria spp). Obviously, the second step was unrealistic for the timeframe of the competition, however, should the concept of combining living therapeutics and N2B delivery continue its development in the real world of science, unfortunately, animal testing would be necessary at some point to test for the safety of our treatment. In fact, our Human Practices survey showed that the safety of our innovative therapy was the main area of interest for both scientists and average citizens.

In one of our Zoom calls with team CityU, one of their team mentioned that they’ve found an in vitro model of the blood-brain barrier to use in their project. This prompted us to also step away from in vivo experiments completely for the time being, and instead, look into researching and designing an in vitro model of the mucosal barrier in the nasal epithelium, suitable for our goals.

Almost immediately we ran into some challenges. We haven’t found an existing model of the nasal mucosal barrier that will account for all of the physiological properties of the nasal epithelium that might affect nose-to-brain delivery. Most standard models [2] that use an air-liquid interface Transwell ®/Franz cell system with a synthetic mucosal layer and standard RPM 2650 and Calu-3 respiratory cell lines do not account for the olfactory or trigeminal epithelium in the nose, which is crucial for our goals (as the delivery of the protein to the brain happens via the trigeminal and olfactory neurons). The closest model we found to that is one that uses nasal olfactory epithelial cell lines by Ladel et al., 2019 [3]. One idea we had was to combine this model with one by Charles et al. [4] which supported the colonization of Transwell ® systems by nasal microbiota, thus allowing us to test both the penetration of the mucosal barrier by the protein and its uptake by the cell monolayer. The main area of concern was how accurately this would model the olfactory epithelium. More accurate organ-on-a-chip models, such as the one by Na et al. [5], which includes the gland-like structures that secrete the mucus, do exist but are overly complex for our goals and a subject of research in their own right.

Though the initial concept was quite simple, the lack of existing models meant that we would have to design our own. As this was somewhat out of our depth, we decided to consult on this matter with an expert in N2B delivery and in vitro modelling of the nasal epithelium, Dr. Romashchenko of IC&G SB RAS. A key insight that he left us with is that technically, we don’t even need to model the olfactory epithelium itself - the nasal microbiota tends to reside in the sinuses, where cells don’t have many cilia and the mucosal current isn’t so strong so as to completely wash away our product before it even penetrates the mucosal barrier, as is the case for the olfactory epithelium. In fact, the secreted product would travel from the sinuses and wash over the olfactory bulbs together with the mucus. This immensely simplified our task.

The article, on which we based our idea of making a fusion protein with the cell-penetrating peptide LWMP [6] states that the mechanism by which their fusion protein travels to the hypothalamus via the olfactory and trigeminal nerves is unclear. It is speculated that endocytosis and macropinocytosis play an important role, however, the intra-tissue penetration mechanisms are “largely unknown” and most likely occur via an extracellular mechanism.

Therefore, uncovering the underlying mechanism behind this type of delivery is a point of interest to us, and an interesting area of research in itself. To account for both potential mechanisms, we decided to use two simple in vitro models.

The first model would test for paracellular penetration via “leaky” tight junctions and would be a simple ALI monolayer system, similar to the ones we were originally researching [7]. The cell type isn’t crucial, provided the cells in the monolayer form tight junctions. In this model, we would also test the interaction of our protein with mucins in an artificial mucosal layer.

An in vitro model for paracellular transport in monolayers scheme

The second model would test for intracellular transport in neurons. We plan to use a microfluidic model to remove the effects of diffusion, similar to the one shown in the image [8]. In the neurons, we would monitor the localization of LEAP (i.e. in lysosomes, the Golgi apparatus, the ER). We can do this with the help of the Myc-tag found in our protein via immunostaining or replace the Myc-tag with a fluorescent tag. In the case of intracellular mechanisms of transport, we would ideally, find our protein in synaptic vesicles and demonstrate synaptic transmission. 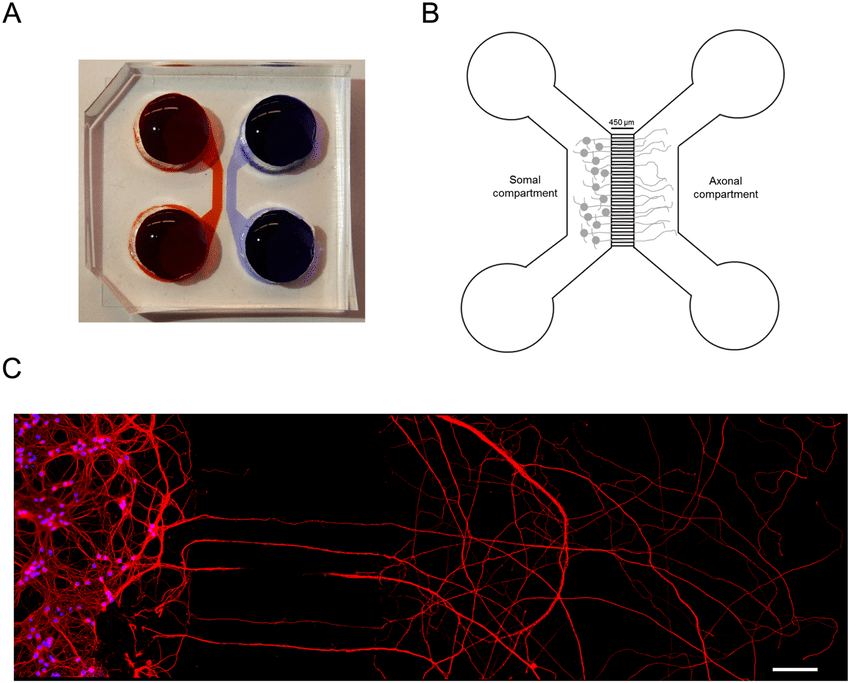 An in vitro model for intracellular transport in neurons scheme

For both models, suitable cell lines are available at IC&G SB RAS and ICBFM SB RAS, and we plan to use those of the required safety level and double-check with the Safety and Security Committee at iGEM prior to doing any after iGEM lab experiments.

As a final point, though in vitro models have many advantages, even the most complex ones cannot account for all of the interconnected physiological effects happening in the organism. Our models, for example, do not take into account the effect of gravity - the olfactory epithelium the mucus washes over is “upside-down”. Nor do these models account for the fact that the volume of the olfactory bulb can fluctuate in response to changes in the sense of smell [9]. On ethical grounds, an additional step may be added after our in vitro models and prior to doing any fully-fledged in vivo tests on mice - a model using murine olfactory epithelium slices, for example. In any case, more complex experiments such as these do fit in our vision of the implementation of our project, they cannot be realistically done in the timeframe of the competition and we consider them to be areas of future research and further development.