We are all different and that’ s beautiful!

Historically, people worldwide have been excluded from the scientific community based on gender, ethnicity, socioeconomic status, or/and abilities. As we were conducting our project, we came across the underrepresentation of synthetic biology's applications. We found a lack of representation for people with disabilities, kids, women in science and technology, and a general lack of opportunities for them.

However, before we move on, we must define - separate the terms diversity and inclusion. Firstly, diversity is a term describing the depiction of unique individuals and social groups, which is focused on the differences between them. An excellent example of diversity is the different kinds of members in an iGEM team, regarding their gender, ethnicity, religion, socioeconomic status, and abilities. However, inclusion is gathering all these members into one team perfectly working. To be more specific, inclusion describes the deliberate act of embracing diversity and unique individuals and groups. So, diversity and inclusion are goals not only for every iGEM team but also for every scientist all over the world. Identifying the various social groups - some with different needs - that have unequal or no access to science would be our greatest duty.

And that is exactly what our team did! After research, we found out that there are many different ways in which we can spot the aforementioned social groups, show them our support and create an inclusive environment for their communities with simple things, in order to give them the opportunity to join us on our journey through science and thrive in it.

First of all, we find it essential to include both younger and older kids, as we feel these groups are furthest away from the discussion. To be more precise, even though younger kids are keen on learning about the world through biology, they often find it difficult to do so due to lack of adequate educational material specifically designed for kids. iGEM Patras aims to break this barrier and give kids the opportunity to explore the fascinating world of Biology.

Entertaining and providing children with opportunities to discover their talents and interests are educators' most important goal. Thus, we organized certain activities that aimed to help children familiarize themselves with biology. 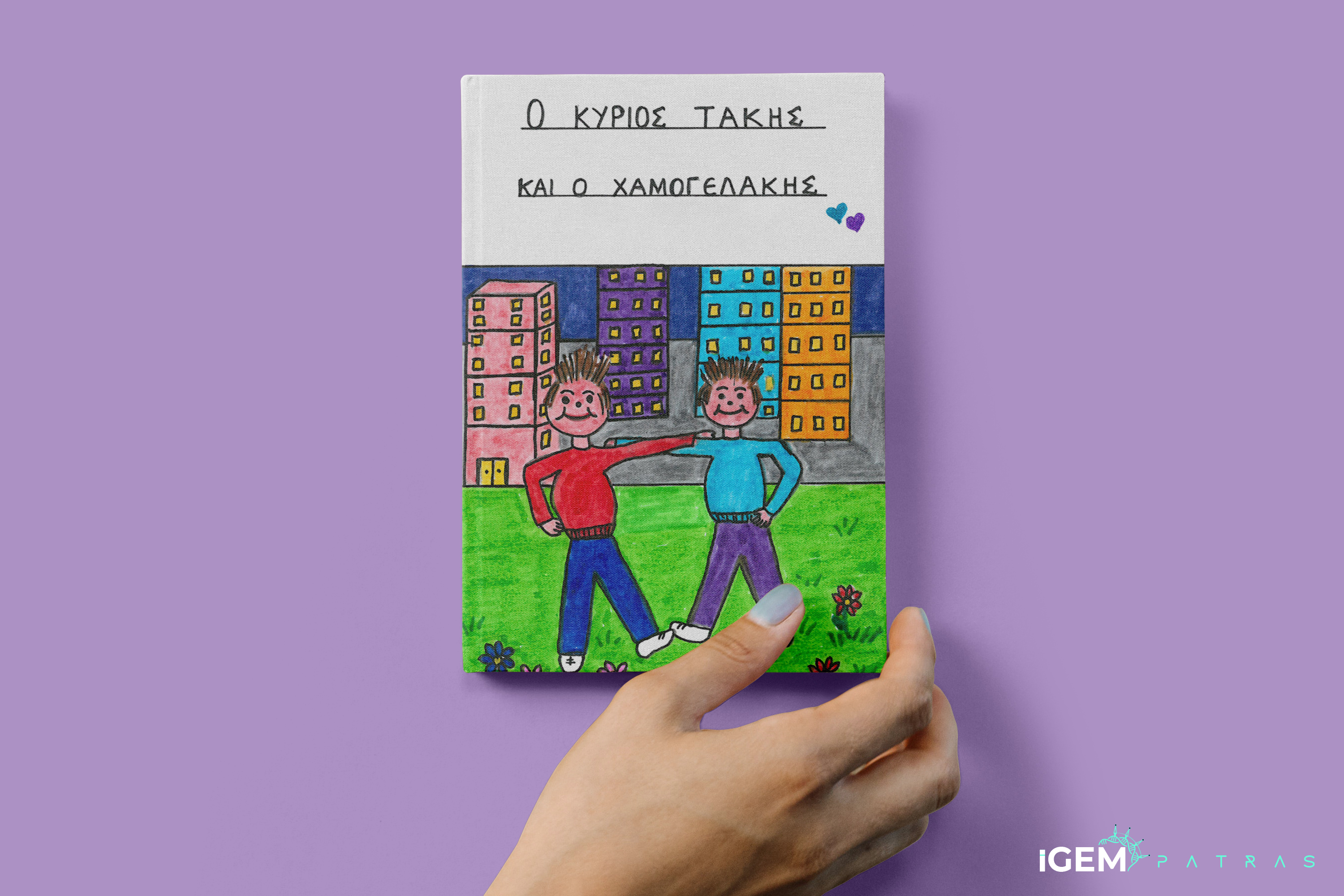 Our first idea was to create a Comic and share it with as many kids as possible. As an iGEM team based in Greece, some of our activities were prepared in the Greek language, especially the Comic, as it was targeted for younger kids between the age of 5 to 12 years old, who do not speak any other language apart from their mother tongue. However, we have collaborated with other teams to translate our Comic to more languages and help more kids from all over the world to learn about Synthetic Biology and Pharmacogenomics. We have translated our Comic into German, French, Austrian, and Chinese. The Comic "Mr Takis and Mr Smiley" (attached), created by iGEM Patras 2021, is a story of two dear friends who are experiencing uncomfortable situations due to a disease afflicts Mr. Takis and an incorrect adjustment of drug dosage.

Thankfully, the story has a positive outcome thanks to the new comprehensive workflow for the identification & functional characterization of Pharmacogenomics variants adapted to a portable next-generation sequencing (NGS) system. Doctors use it as it detects various mutations and proposes the proper adjustment of drug dosage. It is important to say that the storytelling and the graphics for the comic were designed with the help of Georgia Paraskevopoulou, a professional educator, and Rosa Pavlidou, a primary school - kindergarten teacher. They helped us describe biology terms with words that children between 5 to 12 years old understand and spread pharmacogenomics and synthetic biology even at this age.

Furthermore, what better way is to entertain kids than playing board games and learning at the same time? We created two different board games. The first one is phenomenally easier but much more fun and competitive. The second is a bit more complex but surprisingly easier to learn. The first is called "Gene Speed" and the second one is "Sciencebuster". "Gene Speed" is suitable for primary students. It helps them to understand the similarities and the differences in the world of biology through pictures. It is well known that students find it easier to absorb information through interactive activities and primarily through images. "Science Buster" was created for older students in order not only to test their knowledge regarding Synthetic Biology and Genetics but also prompt them to learn as much as possible about these science fields. These are exactly the games that fulfill our primary goal upon kids' inclusion in science; stimulate children's curiosity about the world of synthetic biology and encourage them to learn more about it. For more information regarding the above mentioned games and what we are trying to achieve with them please see the attached images. 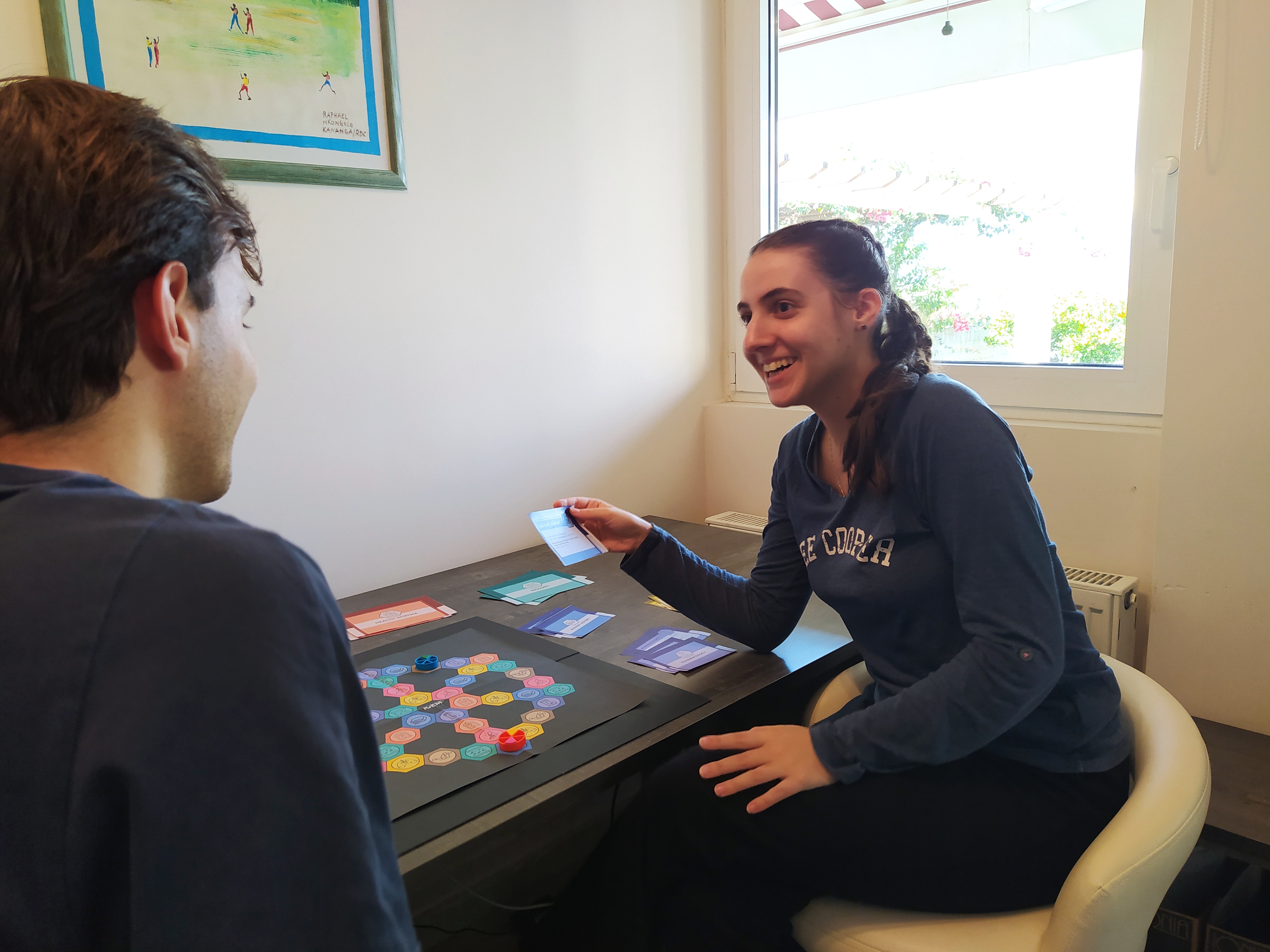 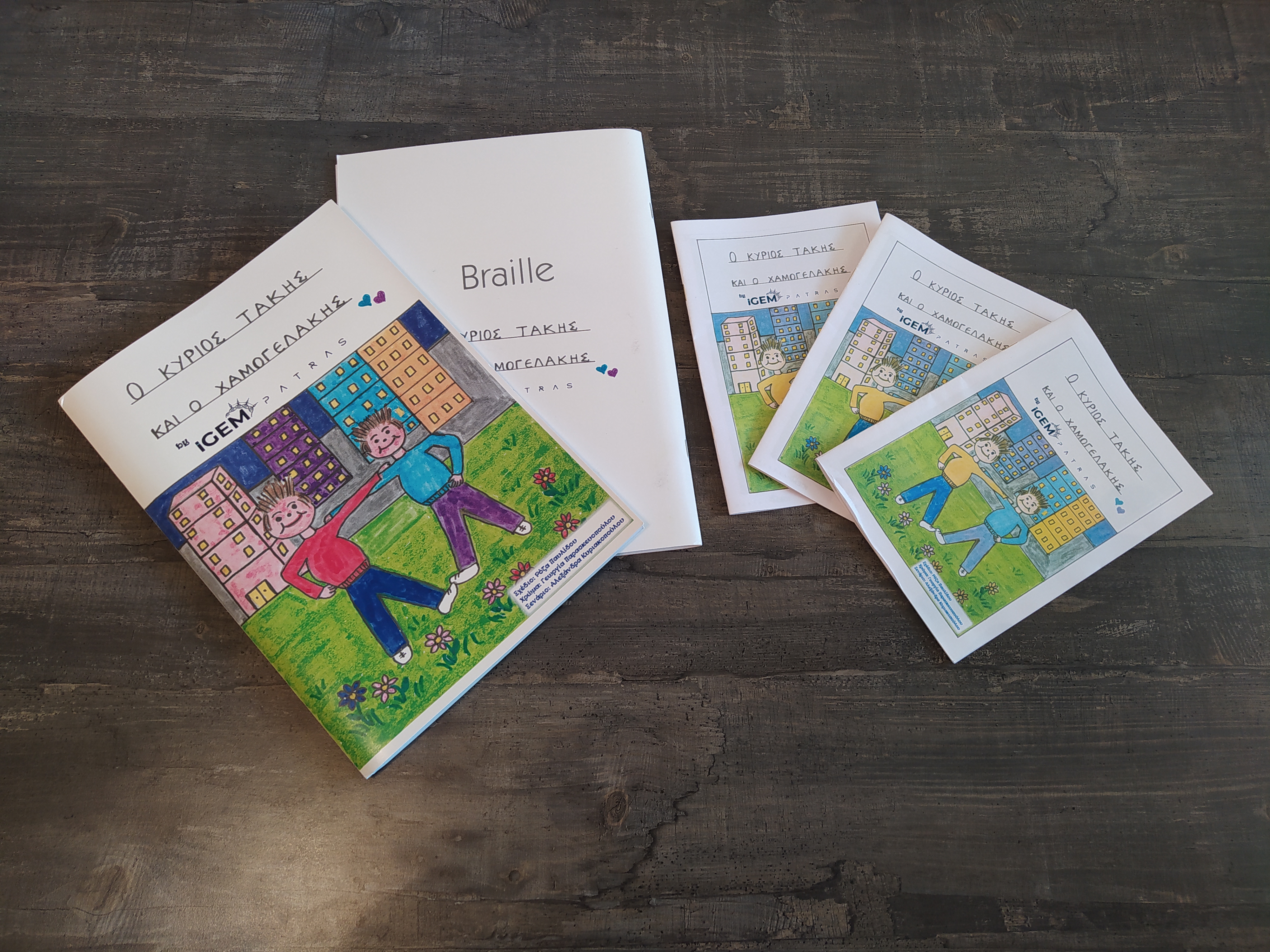 However, nowadays, children are occupied with computers and electronic games. Although the internet hides many dangers for them, it can be used as an educational tool, too. Alongside our partners and fellow team iGEM Thessaloniki, we made some pretty decent actions to include older kids in the scientist's pathway. Our achievement is an online game called "Pathes SynBio adventures" designed on Scratch platform. We created two main characters who embark on a Synthetic Biology journey together. Along their way, they encounter different famous scientists, who give them some information regarding their discoveries. At the end, the two main characters have to answer a number of questions using their acquired knowledge. Both Dry Lab subteams cooperated for the programming of the game. We worked together to find the best questions to get the students' attention and provide them with some helpful knowledge while keeping it fun. Pathes' SynBio Adventures was designed for Junior High School students, but it can provide a valuable source of entertainment for all ages.

Our game is displayed on our wiki page with iframes; this form of display was licensed by the iGEM HQ Committee and specifically by Dr. Traci Haddock-Angelli and therefore does not violate any of the iGEM Wiki Rules. You can also find the source code of our game on iGEM GitHub Repository.

Trying to raise people's awareness about the role of women in science, we are interested in organizing an activity about Women In STEM. After brainstorming, we created a timeline to honor the contribution of Women in STEM on a larger scale! When we published our idea to social media and the igem site, iGEM team ULaval and team Concordia-Montreal approached us to inform us that they also collaborated with a similar subject. Instantly we decided to collaborate all together to have an impressive result! It is unexpected but real in the iGEM 2021 competition, where Team Patras, team ULaval, team Concordia-Montreal and team Thessaloniki want to collaborate on Women in STEM. Trying to include more and more people in Synthetic Biology, we found out that women are still a minority in academia. For example, in Western Europe, 21.7% of heads of higher education institutions were female in 2017.

Women of color in the United States are significantly underrepresented in academia, and are more likely to hold lower-ranking positions.This eminent exclusivity limits the number of people working on advancing knowledge, thereby missing out on a wide range of perspectives, experiences and backgrounds, resulting in lags in the advancements of science, technology, engineering and mathematics (STEM). So, what are we waiting for? iGEM could give us the perfect opportunity to celebrate what women are doing in synthetic biology worldwide and help us encourage other aspiring scientists to pursue their dream career. Thus we organized the Rosalind Chronicles project, a Bulletin Board to honor the contribution of Women in STEM on a larger scale! We ask other iGEM teams to send us a photo of a scientist and a picture of your team's women teammates. These researchers displayed in a timeline, allowing teams to feel inspired and develop an appreciation for what women are doing in STEM, get to know what research is done in other countries and find new research opportunities to develop their scientific curiosity. This collaboration concluded by presenting to the public not only successful women in biology but also how many women participated in iGEM Competition. It is important to say that this collaboration ended up with a webinar that was organized by teams of Thessaloniki, Patras, ULaval, and Concordia-Montreal. This event emphasized the role of women in science and championed women scientists, some of them for the first time both on a national and international level.

Also, the Rozalind Chronicles timeline was presented and the topic of diversity and inclusion were highlighted. This activity aimed to inspire and broaden women's horizons, empowered them to believe in themselves, to aim higher and excel in any field of science they put their minds into, no matter their gender. 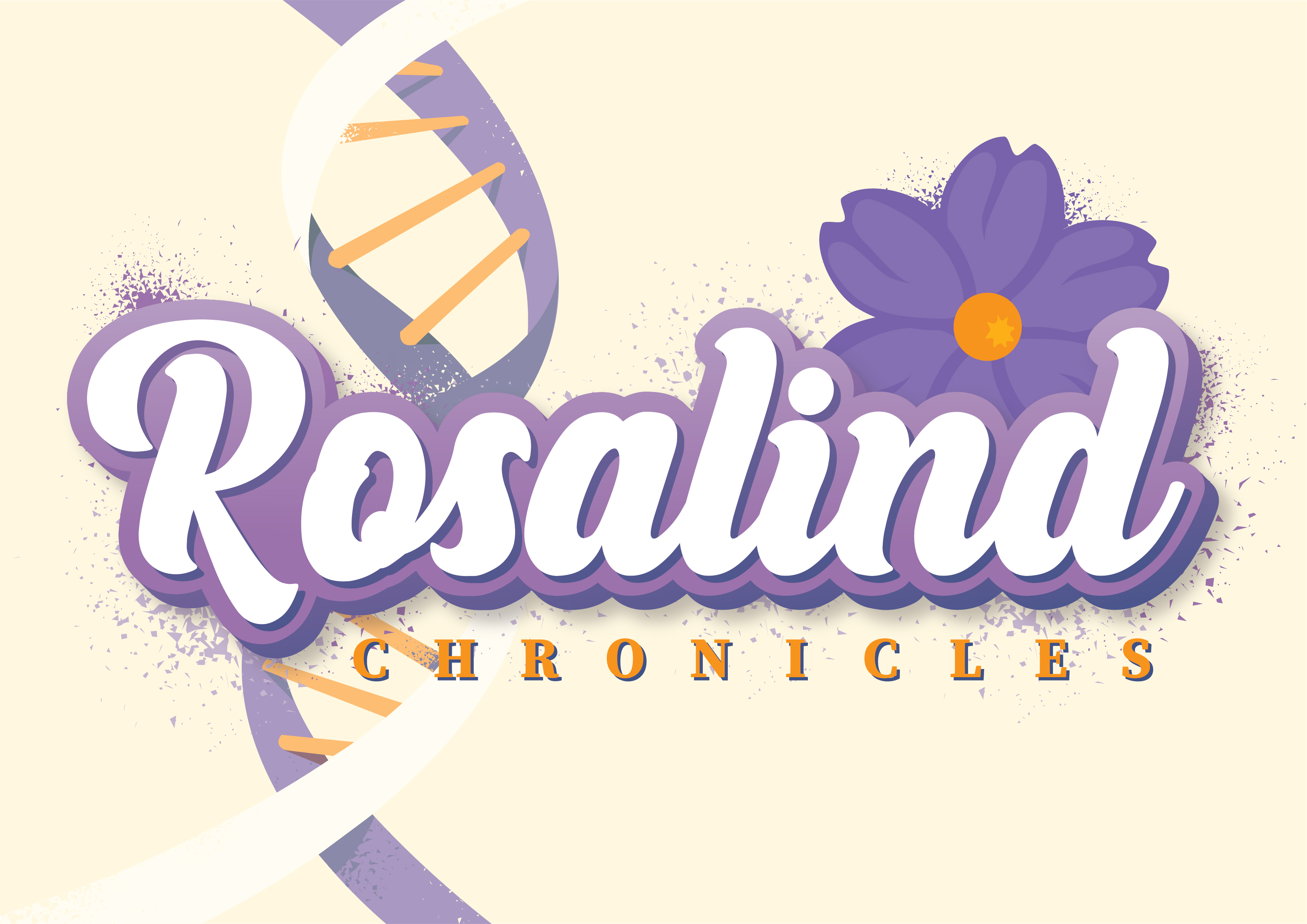 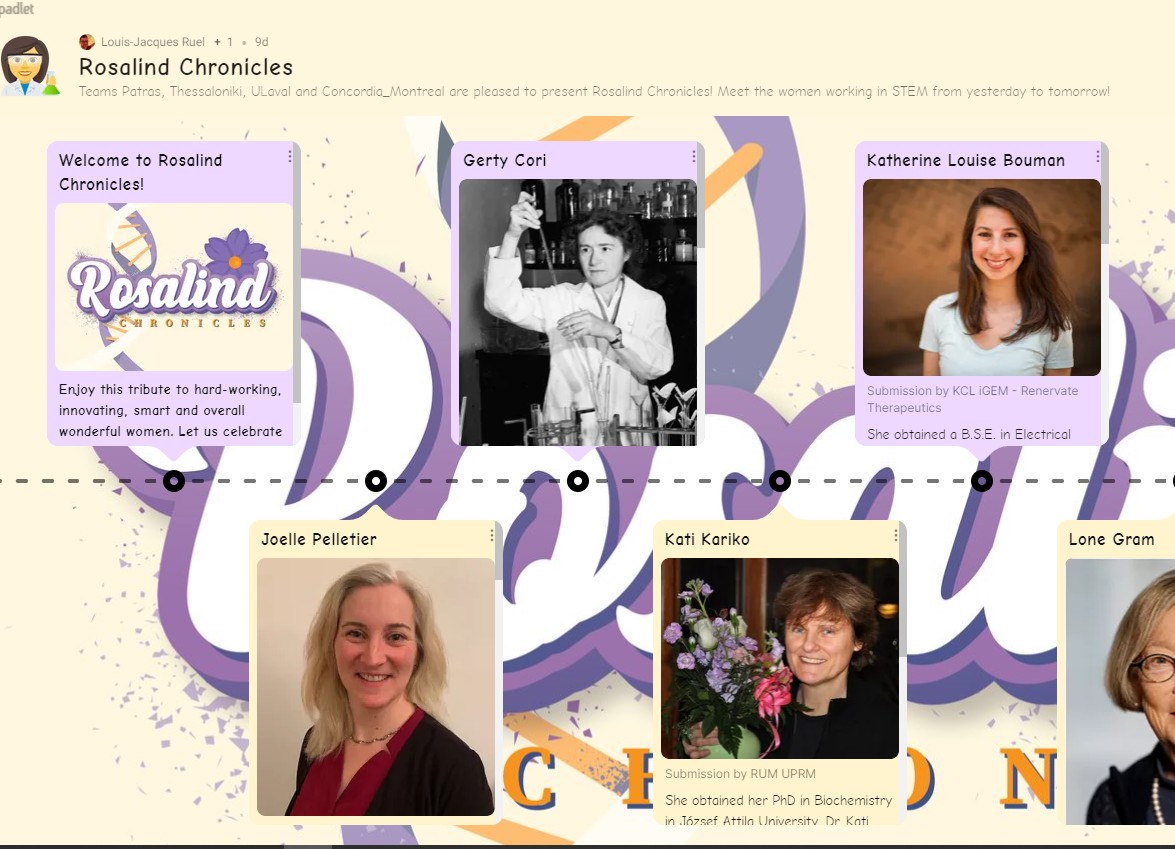 In addition to giving access to biology to the minorities, we tried to figure out how science could be accessible beyond spoken language? Sometimes words aren't sufficient for everyone due to specific disabilities. So, we decided to contact "Hands up" company which is the first sign language interpreters agency in Greece. The agency offers accessibility services and news about sign language. We cooperate in order to make our promotional and project promotion video in international sign language in order to be understandable by hearing impaired people. The result was fantastic, and we are pleased that we contributed to make biology accessible to hearing impaired people. We hope that our actions will have a positive impact and will provide equal opportunities for everyone to excel in sciences. 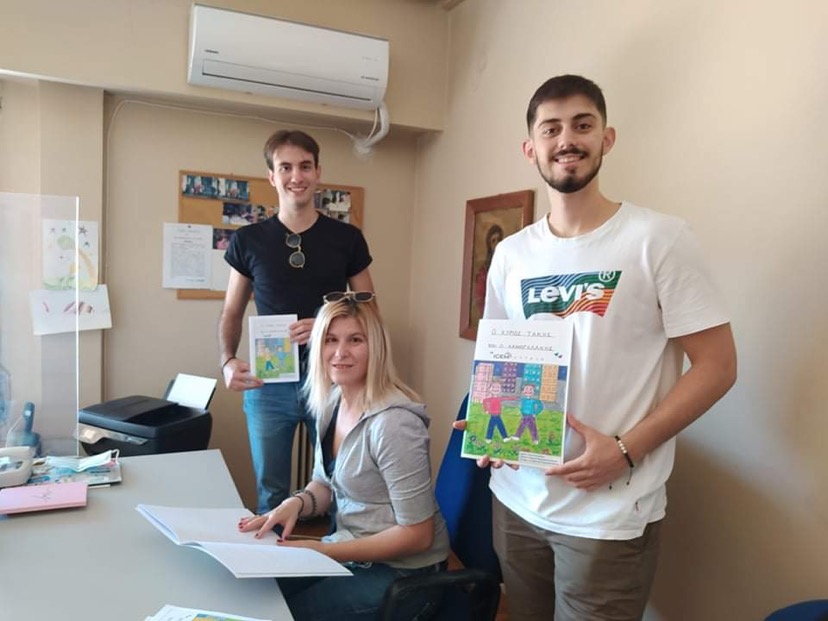 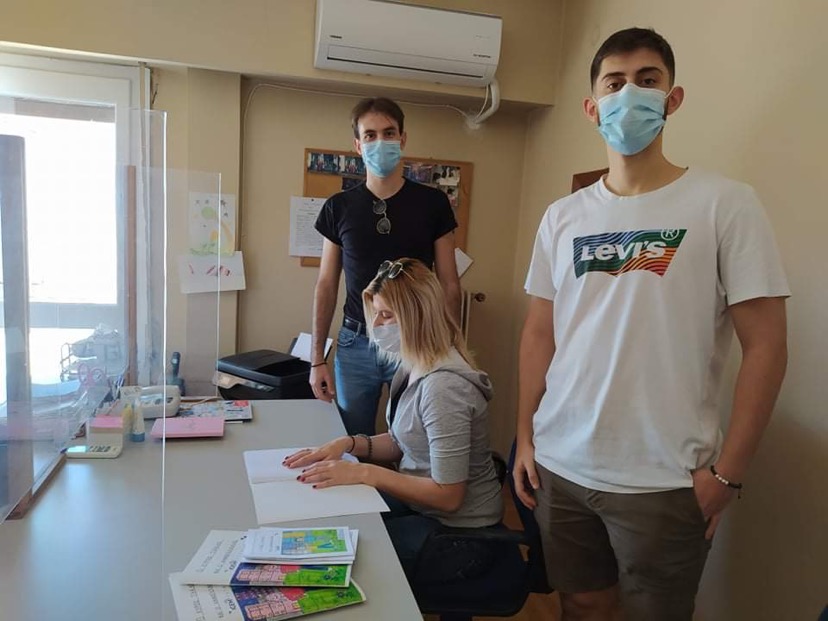 Trying to make our project as accessible as possible, we researched on how to include Audio Descriptions on our site. Audio Description involves the accessibility of the visual text for people who are visually impaired, have low vision, or who are otherwise visually impaired. It is a narration service that attempts to describe what the sighted person takes for granted. We would like to make Synthetic Biology accessible to everyone by eliminating this barrier. Thus, we propose everyone to follow the instructions in order to give the opportunity to everyone to have access to every site.

Select the pin near the name of the extension on the toolbar.

The “Read Aloud” extension will appear.

If you want to check it, you have to search 2021.igem.org/Team:Patras and the audio description starts. Furthermore, there are different settings you can regulate.

Set the speed and the pitch of the voice.

Choose if you want the text highlighted during audio description.