There is something to be learned from project PGasus.

According to the U.S. Food and Drug Administration (FDA), 2,216,000 serious Adverse Drug Reactions occur in hospitalized patients causing over 106,000 deaths annually; thus side effects of medicines appear as the 4th leading cause of death in the US. It is well known that many medicines are more likely to be prescribed based on the patient’s genetic background. This procedure is explained by Pharmacogenomics, a new scientific field that describes the differential drug response in patients who receive the same drug dosage due to the different genetic background.

There are approximately 231 pharmacogenes well known to affect drug’s pharmacology in an individual-specific manner. Fifty of them regulate the expression of CYP450 liver enzymes.

Two of the most important liver enzymes are CYP2D6 and CYP2C19, involved in the metabolism of a variety of clinically used drugs in the human body. Especially, antidepressants (p.ex. TKA and SSRIs antidepressants) drugs have a very specific characteristic that makes the need of personalised medicine more urgent. It takes approximately 4-6 weeks for antidepressants to have a clinical visibly therapeutic effect, so the try and error method that some doctors still apply regarding these drug doses, make their patients suffer from ADRs weeks after their drug administration.

These two genes are highly polymorphic, and this genetic variation is associated with profound changes in enzymatic activity. Mutations on these genes are responsible for the lack of efficacy and adverse effects of drug therapies.

However, while many patients underwent pharmacogenomic testing before drug administration and dosing adjustment according to EMA’s and FDA’s guidelines, they eventually experienced drug ineffectiveness and side effects.

Consequently, there may be unreported, low-frequency variants, called novel variants, the effects of which are significant enough to be considered in determining drug dosage. There have been many studies showing novel variants with considerable functional impact on drug metabolism.

The contribution of rare variants was found to be highly gene and drug-specific and can account for a substantial part of the unexplained genetic inter-individual variability in drug response. It is noteworthy that there are 40.6 variants in every pharmacogene and 10% of them are rare. These variants seem to be significant for the general diversity of drug response.

What is Pharmacogenomics (PGx)?

Pharmacogenomics is the scientific field that studies how genes affect a person’s response to drugs. PGx describes the differential effects in patients who receive the same dosage of a drug due to differences in their genome profile, which can subsequently contribute to treatment individualization.

This exciting and powerful emerging field combines pharmacology and genomics to develop effective, safe medications and doses tailored to a person’s genetic profile.

Differences in the genetic background determine how well a person will metabolize certain medications. If the metabolism is too fast or too slow, this may cause a bad reaction to the medicine. Through pharmacogenetic testing, differences in DNA can be found and allow the prediction of a drug's metabolism. The results of the pharmacogenetic testing will place the patient into one of four groups and will guide the doctor to choose the appropriate drug dosage for each person. 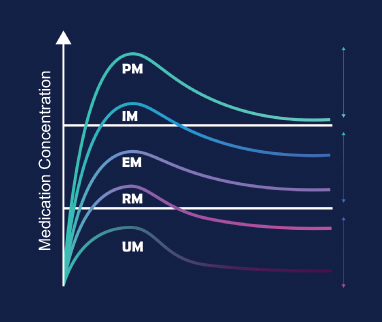 Poor Metabolizers (PM): People in this group metabolize certain drugs slowly and are likely to face the risk of drug inefficacy due to increased medication clearance resulting in low blood levels of the drug. Thus, to achieve the therapeutic goal, it needs to decrease the drug’s dosage.

Intermediate Metabolizers (IM): People in this group metabolize some drugs at a rate between the poor and the normal metabolizers, and there is no great need for dosage adjustment.

Extensive Metabolizers (EM): People in this group have a normal rate of medication clearance and desired drug efficacy, so there is no need for dosage adjustment.

Ultra Rapid Metabolizers (UM): People in this group metabolize certain drugs rapidly and face a higher risk of experiencing adverse drug reactions and toxicity due to the decreased medication clearance resulting in higher blood levels of the drug. In this group, it is necessary to significantly increase the drug’s dosage to reach the therapeutic dosage.

Pharmacogenomics aims to optimize drug therapy to ensure maximum efficiency with minimum adverse effects concerning the patient’s genotype. Through the utilization of pharmacogenomics, it is hoped that pharmaceutical drug treatments can deviate from what is said as the “one-dose-fits-all” approach. Pharmacogenomics also attempts to eliminate the trial-and-error method of prescribing, allowing physicians to consider their patient’s genes, the functionality of these genes, and how this may affect the efficacy of the patient’s current or future treatments.

Our new comprehensive workflow for the identification & functional characterization of Pharmacogenomics variants adapted to a portable next-generation sequencing (NGS) system is moving towards solving the above problem.

Our sequencing data containing the novel PGx variants were obtained from targeted sequencing on MinION from Oxford Nanopore Technology. MinION is a portable, pocket-sized sequencer weighing less than 450g, easily connected to a laptop with a USB. MinION uses the innovative technology of nanopores, across which a current is passed, and single-stranded DNA or RNA can be streamed through the pores and sequenced in real-time. It also provides immediate data streaming for rapid, actionable results, capable of assembling and characterizing repetitive and difficult regions with ultra-long reads with a low cost of operation. 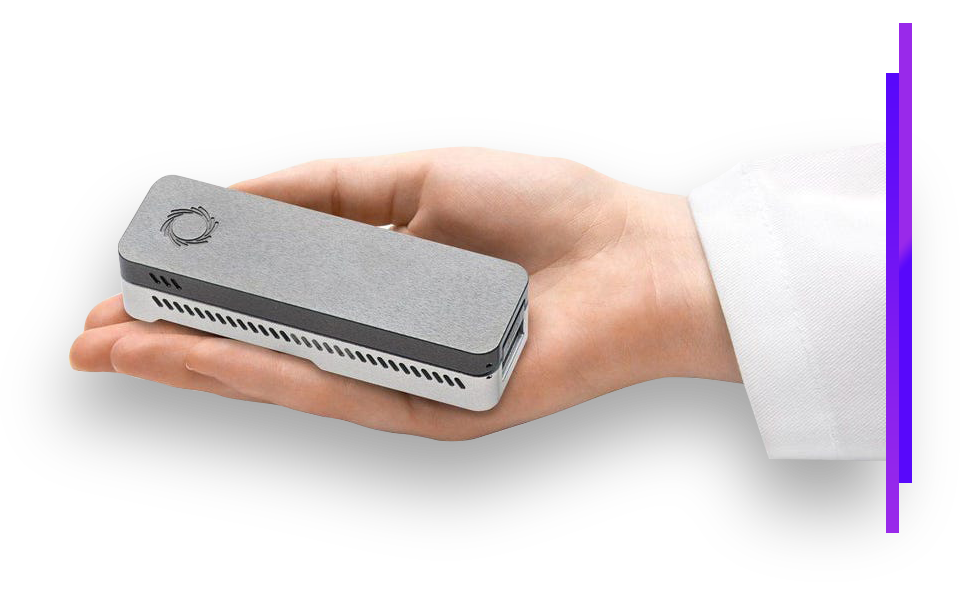 Our goal is to characterize the impact of genomic variants on the enzymatic activity of two CYP450 enzymes, CYP2D6 and CYP2C19, responsible for the metabolism of a wide range of clinically used drugs such as opioid analgetics, antidepressants, antipsychotics, chemotherapeutics, using in vitro assays. These variants will be engineered into gene constructs encoding these enzymes and subsequently characterized as deleterious or benign and compared against in silico prediction scores. Furthermore, to validate the mechanisms underlying the molecular interaction between the mutated CYP isoforms and the chemical substrates, we used molecular simulation methods like docking to confirm the potential deleterious effect of the identified PGx variants.

SynBio is a mixture of the scientific fields of Biology, Biotechnology, Systems biology, Engineering, Chemistry, Mathematics, and Bioinformatics. The field of Bioinformatics is the one that consists of understanding biological data methods and the one that we dealt with through our project. The Next-Generation sequencing in Project PGasus is an informative example of what Bioinformatics is capable of. Next-generation sequencing (NGS) is a massively parallel sequencing technology that offers ultra-high-throughput sequencing and time-efficient data analysis. Nanopore sequencing is a unique, scalable technology that enables direct, real-time analysis of long DNA or RNA fragments. It works by monitoring changes to an electrical current as nucleic acids are passed through a protein nanopore. The resulting signal is decoded to provide the specific DNA or RNA sequence. So, this year, common, rare, and novel PGx variants that were detected with the help of Oxford’s Nanopore’s NGS and principles of Bioinformatics, one of the seven parts of synthetic biology, were properly utilized for their functional characterization.

Taking into consideration that novel variants play a vital role in entire pharmacogene variability, we kept on trying to functionally characterize these unreported, low-frequency variants. Specifically, we managed to reproduce the recombinant enzymes derived from the novel variants and determine their enzymatic activity. This procedure was performed via site-directed mutagenesis in eukaryotic cells, 293FT, a fast-growing, highly transfectable clonal isolate derived from human embryonic kidney cells that allows very high protein levels to be expressed. We subcloned the sequences for the expression of the wild type and variants CYP2D6 and CYP2C19 enzymes into a mammalian expression vector, and we transfected them through lipofection. 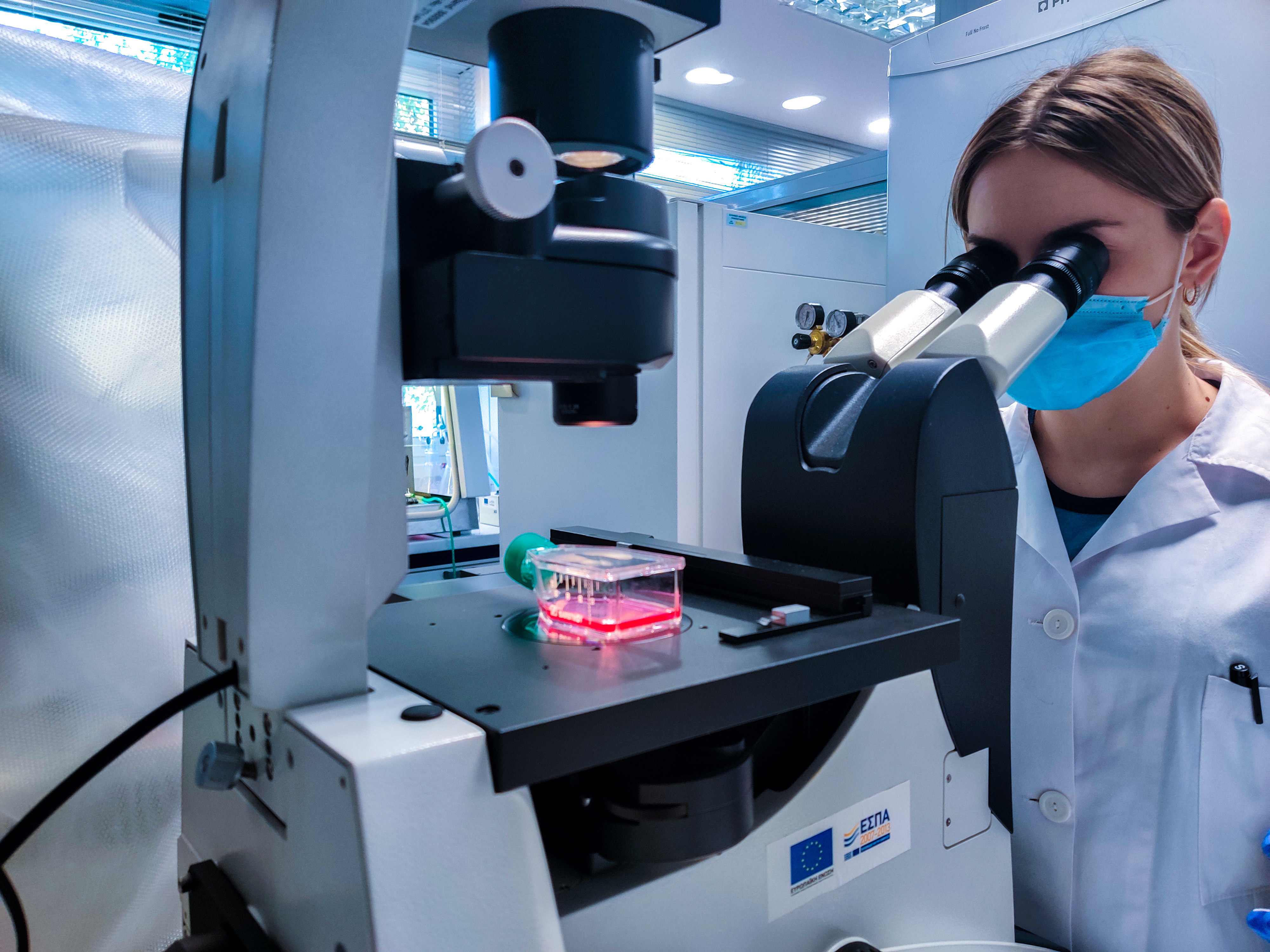 So, the overall conclusion is that we owe the comprehensive workflow for the identification & functional characterization of PGx variants - which iGEM Patras proposes this year - to the existence of Synthetic Biology and its applications.

Pegasus was an immortal, mythical winged divine horse in Greek mythology. According to the Ancient Romans and Greeks, the name Pegasus was associated with power and immortality-longevity. Ancients believed that Pegasus sometimes comes to people who need strength, virility, or healing. And this is exactly the ultimate goal of our project; through the application of pharmacogenomics, we aim to minimize the ADRs and the subsequent deaths, providing a better quality of life for the patient and life prolongation. At this point, we have to note that the initials P and G of the word PGasus stand for the term Pharmacogenomics.

PGx is an innovative and pioneering approach to Therapeutics and Precision Medicine, even if it is not widely used in clinical practice yet. Due to the wide range of applicability and the necessity of its use in determining the appropriate drug dosages and prescribing the best available drug therapy from the beginning, the field of Pharmacogenomics inspired us to create Project PGasus aiming to make individualized medicine accessible to everyone.

Project PGasus aims to minimize the ADRs of a wide range of drugs and the subsequent deaths through a fast diagnosis with accuracy of results and reduced cost. To achieve this, our team is presenting a comprehensive workflow for the identification & functional characterization of Pharmacogenomics variants in order to propose the proper adjustment of drug dosage and thus decrease the risk of side effects.

Our vision is for Project PGasus to set the foundations and become an inspiration for future scientists to take this research a step further, aiming to detect not only common and rare variants but also novel ones. Oxford Nanopore MinION sequencer represents a remarkable example of third-generation sequencing. It is a one-of-a-kind technology that enables direct yet real-time analysis of short to ultra-long fragments of DNA or RNA in fully scalable formats.

Establishing our approach as an everyday diagnostic tool, due to its portability, low-cost and time-saving, for public health systems around the world has always been our ultimate goal. The future step of our project is to develop a neural network for automatization of the NGS analysis, to make the results understandable by health professionals in order to make Pharmacogenomics more easily implemented in clinical practice. Last but not least, we hope to collaborate with the Ministry of Health to make our workflow adaptable to healthcare units while insurance companies could cover the operation cost. Being affordable, time-efficient, and easily transported to remote districts are the key points to persuade the government for its implementation.