Press anywhere to go back

E - nadE for restriction digestion with Nhe1 (insert for MCS2)

The Figure 1.1 shows the picture of gel run after PCR amplification of genes aimed to be inserted into plasmid. Although there are smears at the bottom of the gel that might be represented by the DNA fragment contaminations or formed primer dimers, the gel provided confirmation of successful amplification of rhlA (C) and rhlB (D) and nadE (E) genes. These genes were eluted and gel purified for further use in genetic cloning. nadE in this case was amplified using primers that have restriction sites of Nhe1 restriction enzyme, which is not suitable for insertion into MCS1. 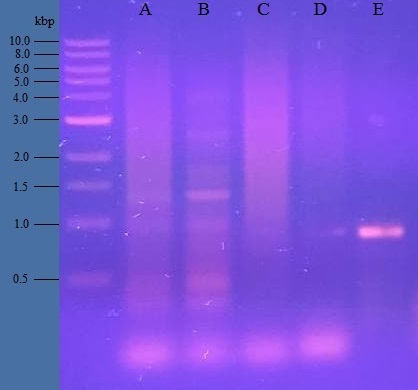 A, B, C and D represent PCR products aimed to isolate the cluster of rhlA and rhlB genes at different annealing temperatures; however, the amplification was not successful. The wells E represents successfully isolated nadE gene using primers with restriction sites suitable for insertion into MCS1.

To confirm that the restriction and ligation was performed successfully, the plasmids pRGPDuo2 + nadE, pRGPDuo2 + rhlA and pRGPDuo2 + rhlB were extracted from P. aeruginosa cells transformed with corresponding plasmids and grown overnight in selective medium solution of Luria Bertani broth and kanamycin. The extracted DNA plasmids were incubated with SalI and SacI restriction enzymes for double digestion. The digestion reaction products were run on gel represented on Figure 1.3. It can be seen that the uncut plasmid (A) is localized higher than the cut linearized plasmid. The uncut plasmid (A) is circular which, due to the clustering of genes, travels distance less than allowed by its size (7928 bp). Meanwhile, the linearized plasmids resulting from the double digestion are located in the line with the ladder band representing 8 kbp. The digestion reaction mixture of plasmids extracted from strains pRGPDuo2 + nadE, pRGPDuo2 + rhlA and pRGPDuo2 + rhlB also showed bands indicating inserted genes. The size of the rhlA gene is 916 bp (including region outside of the gene complementary to the primer sequence) and can be observed in the wells D and H lower than the ladder band representing 1000 bp, which confirms the digest of the rhlA gene from the plasmid extracted from the engineered strain of P. aeruginosa. nadE gene of size 846 bp cut from the plasmid (C) was identified lower than the band of the ladder (1000 bp) and of rhlA gene (916 bp). rhlB gene of size 1320 bp (wells E and I) also was detected between ladder bands of 1 kbp and 1.5 kbp. Overall, the gel confirmed that the insertion of the genes into plasmids was successful as they were double digested again after transformation of P. aeruginosa. 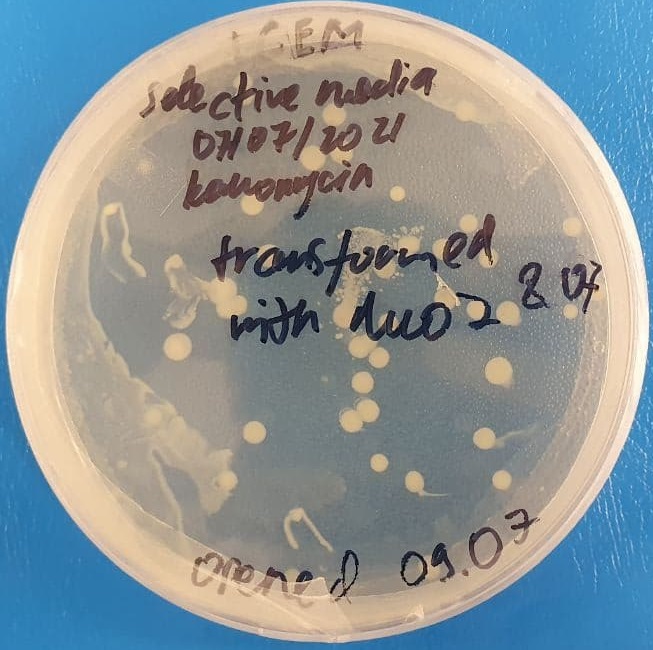 As it was expected, E .coli carrying pRGPDuo2 with kanamycin resistance gene was able to grow on selective media containing kanamycin. It indicates that the transformation of RGPDuo2 plasmid into E. coli was completed and E. coli carries pRGPDuo2. 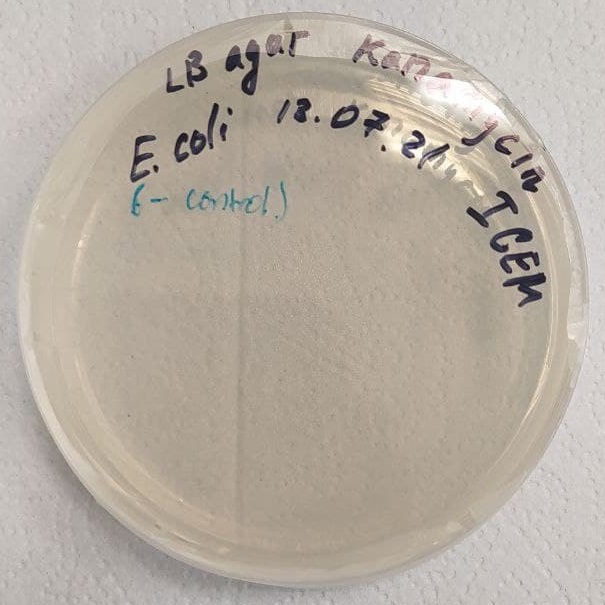 Wild-type E. coli does not have resistance to kanamycin, therefore it was not able to grow on selective media plates. 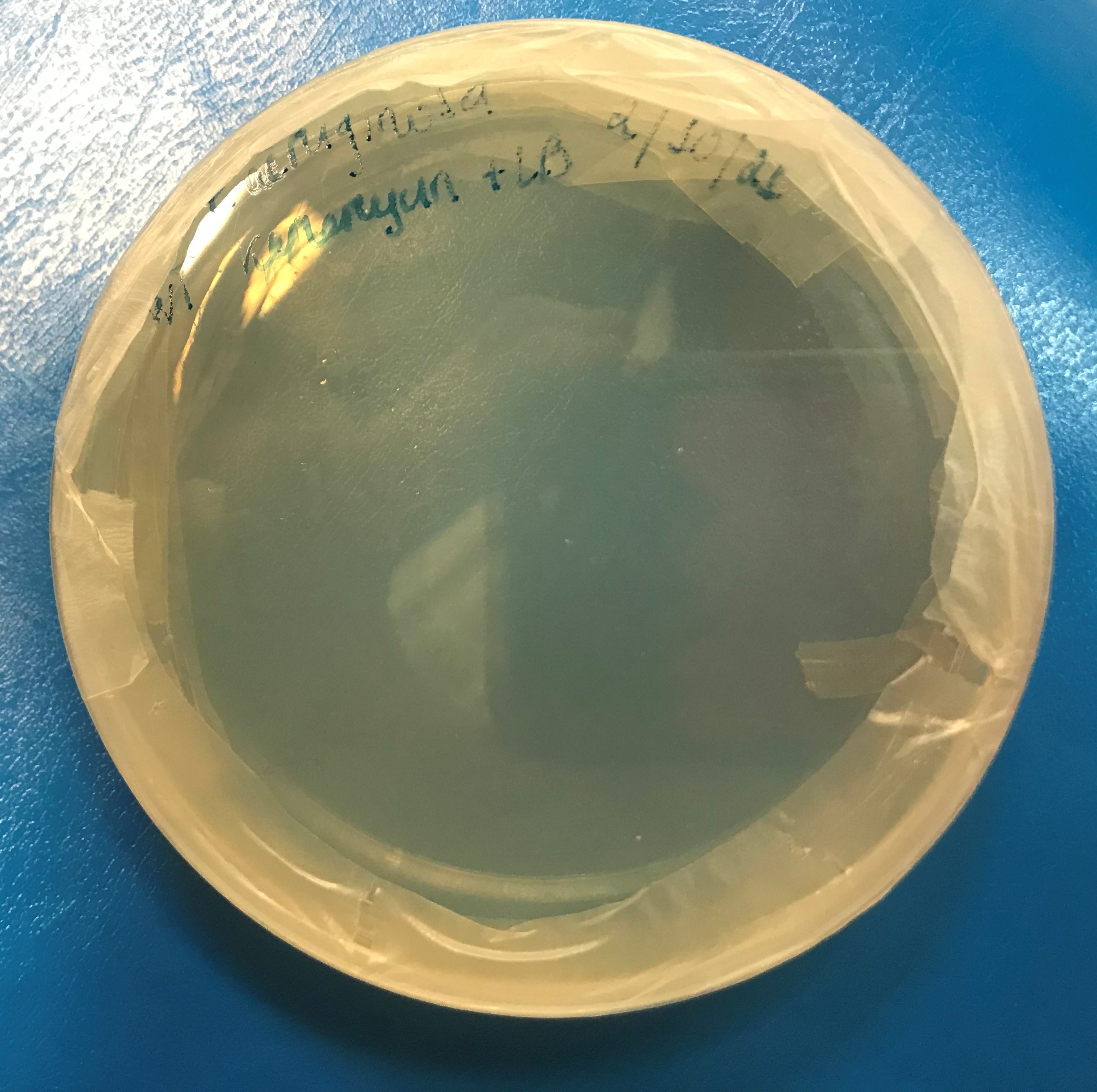 Similarly, wild-type P. aeruginosa does not carry resistance genes to kanamycin. Therefore, it did not grow on LB agar containing kanamycin. It serves as a negative control for transformation of P. aeruginosa with different plasmids. 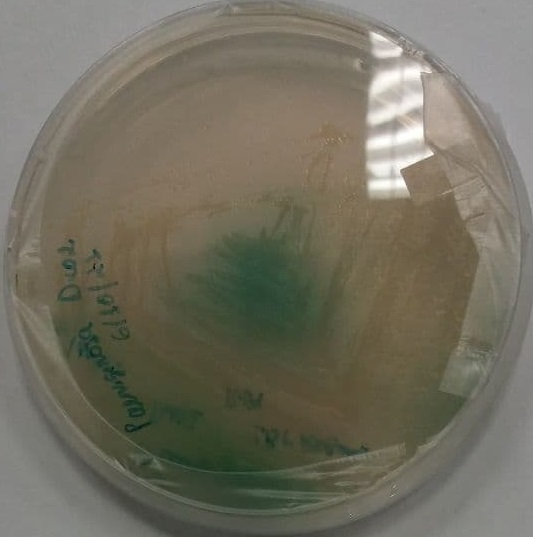 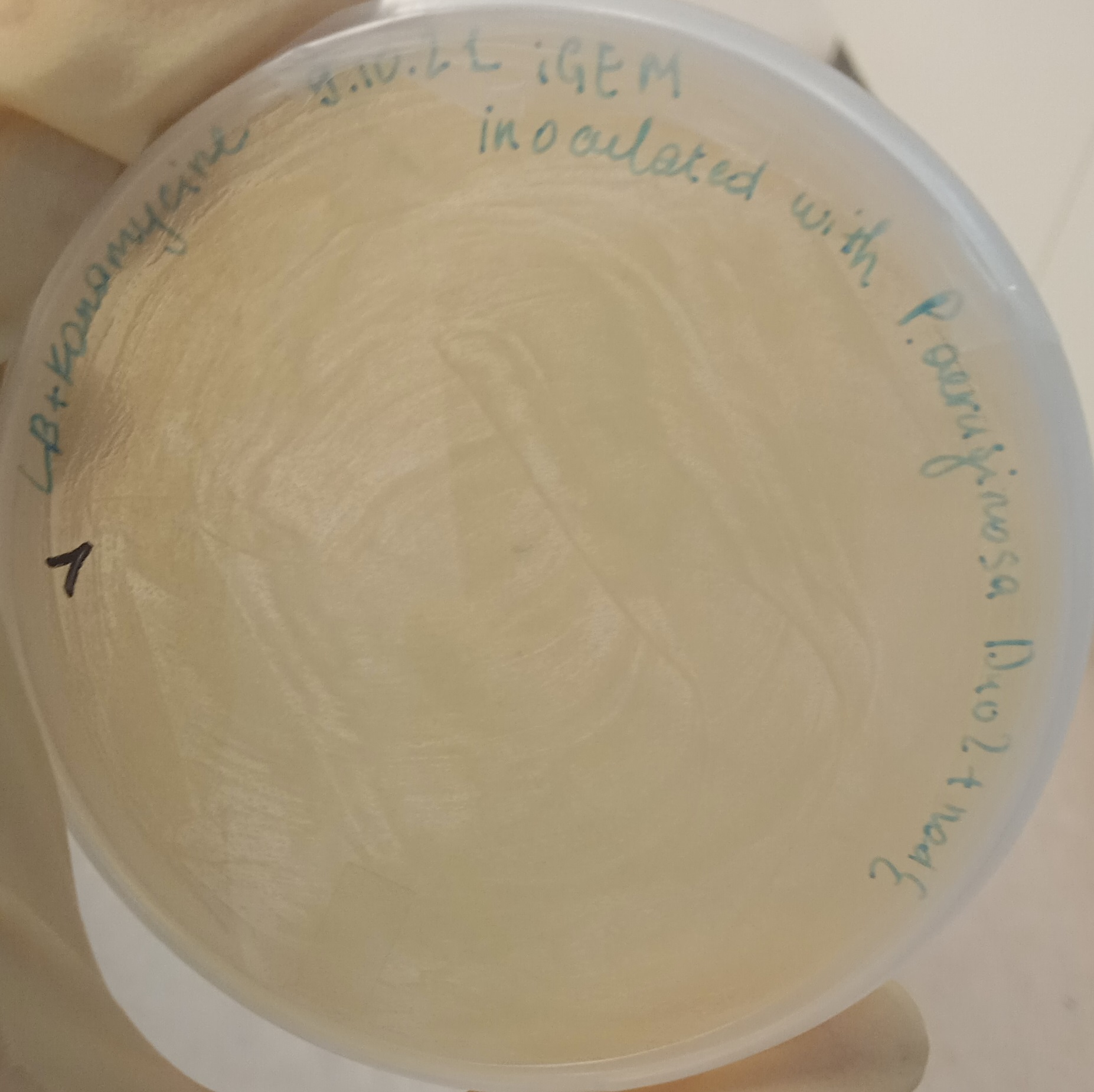 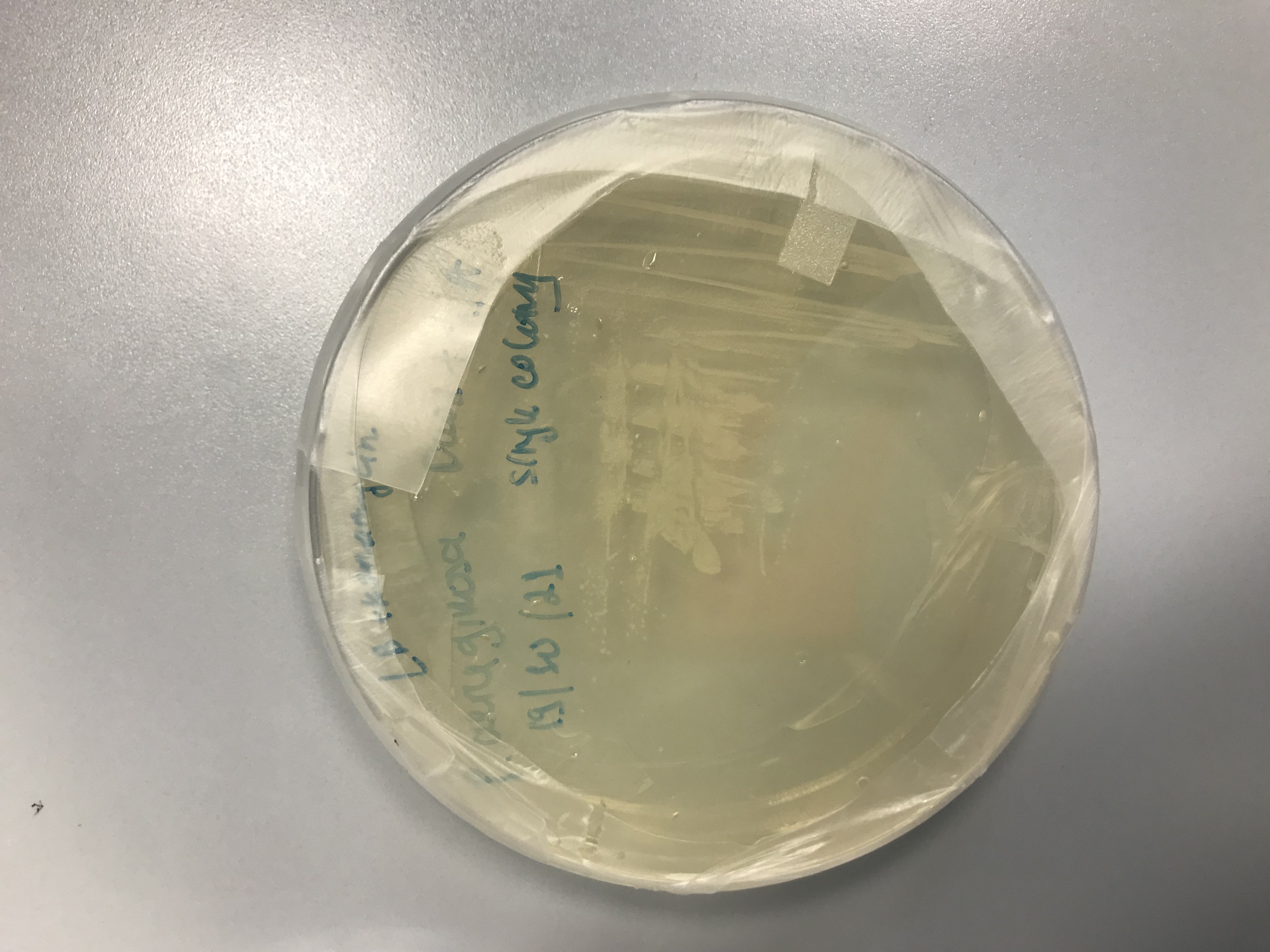 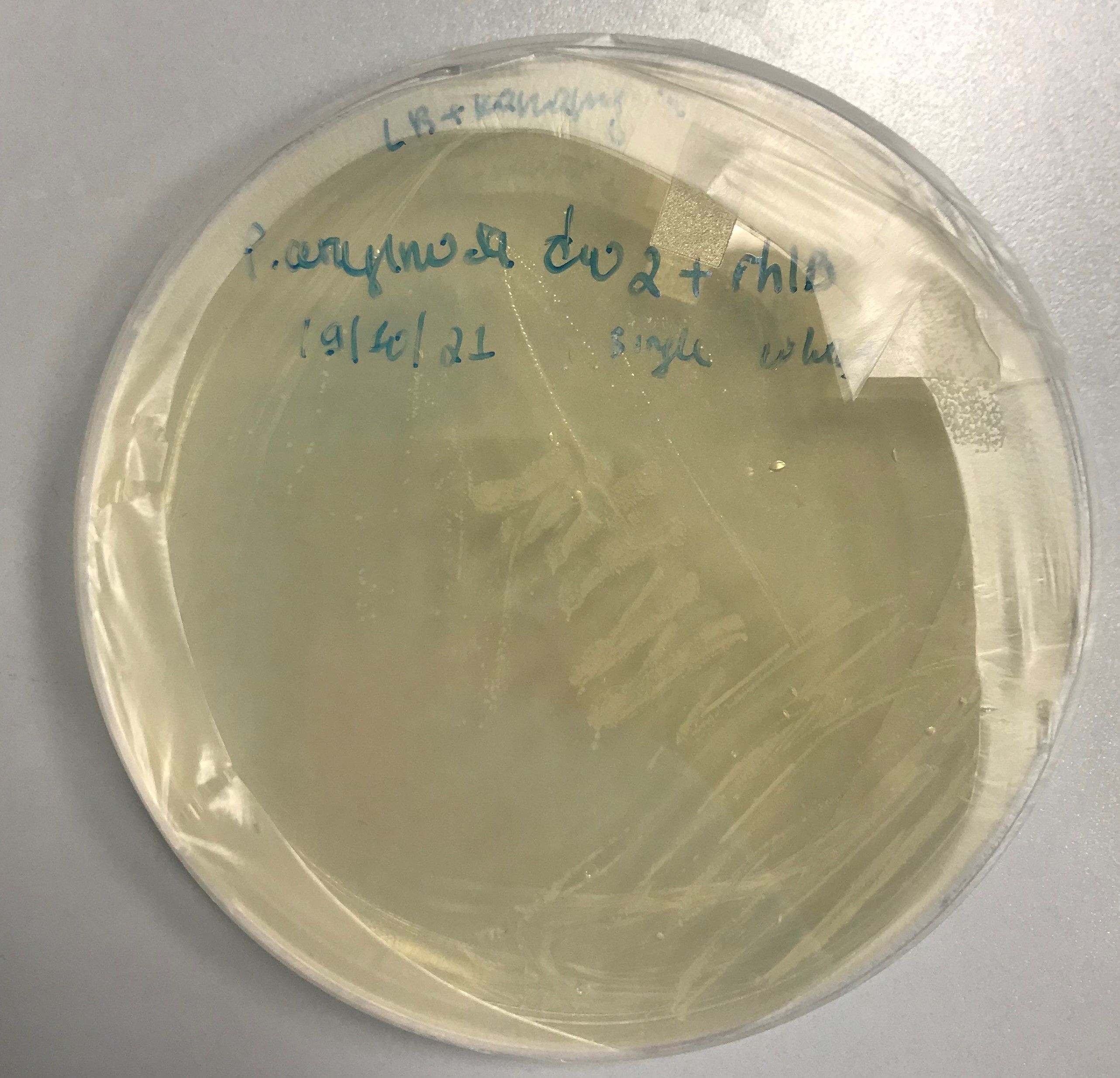 Figures 2.4-2.7 depict that pRGPDuo2 carrying nadE, rhlA and rhlB genes respectively were incorporated into P. aeruginosa. Single colonies from the given plates were used in the following experiments. 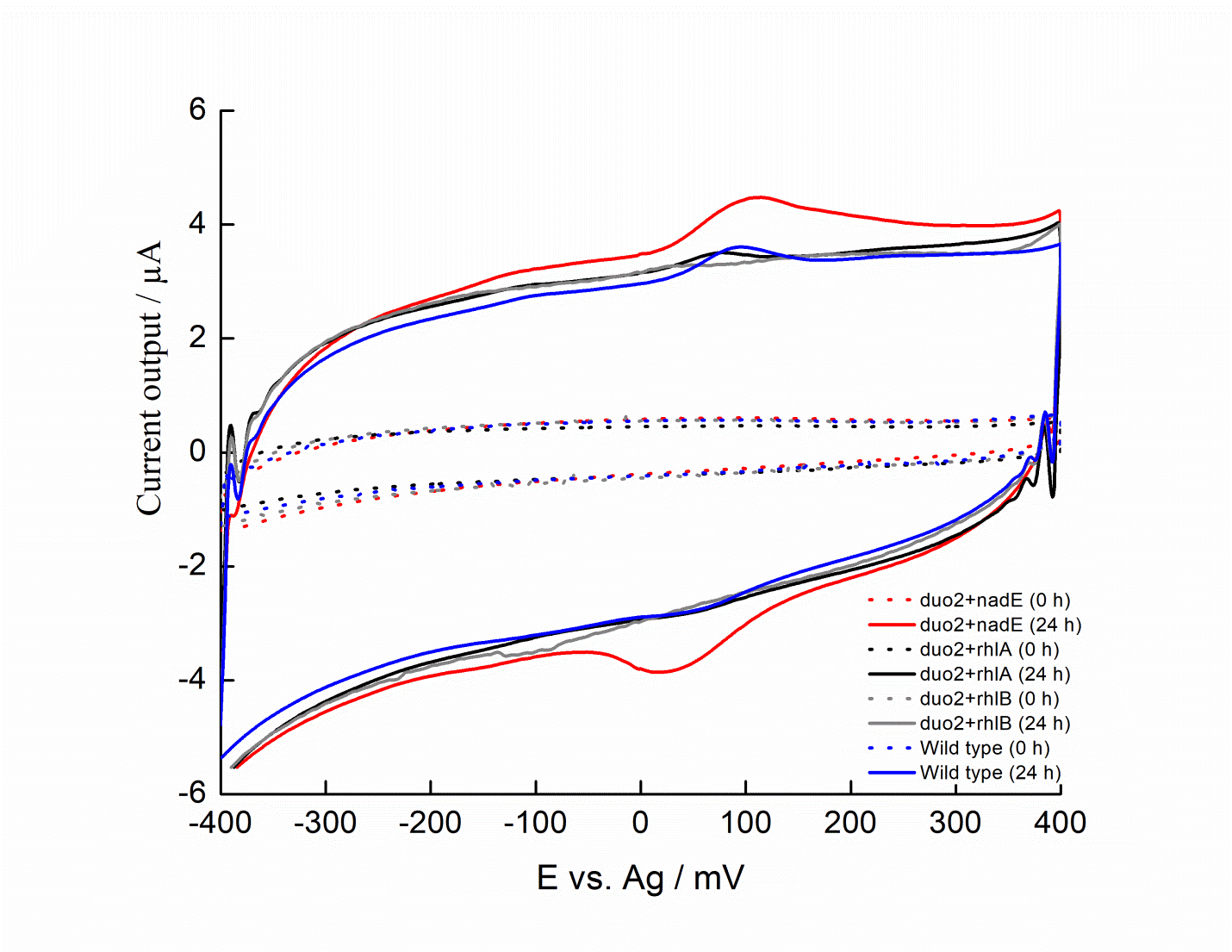 CV plots show distinct oxidation (upwards) and reduction (downward) curves which imply that the setups are redox active (electrochemically active). The gaps between the curves show the extent of electrochemical activity measured in degree of current outputs quantified in microamperes. The wider the gaps between the curves, the higher the current differences, and the higher the electroactivity. At time 0h (beginning of experiment) there was a very minimal electroactivity in all the test setups with the different strains as there was almost 0 uA current output. However after 24 h of incubation, there were clearly distinct oxidation and reduction curves showing increased current outputs as the cells grew. Further examining the 24 h curves for each of the strains, it can be observed that there were protrusions on the oxidation curve (approximately 100 mV) and reduction curve (0 mV). This peak is attributed to a specific mechanism of electroactivity the bacteria are using most likely attributed to increased biomass or electroactive biofilm formation. It is quite obvious that P. aeruginosa nadE (red line) had the highest peak among the test strains after 24h incubation. This could be attributed to the increased respiratory activity of the strain caused by the influence of increased NAD synthetase production. Increased NAD synthetase directly influences increased cellular metabolic activities and could directly affect rhamnolipids yields. In this case, all other strains P. aeruginosa rhlA, P. aeruginosa rhlB and the wild type strains though they showed slight peaks at similar oxidation reduction points, they did not have overexpressed NAD synthetase, therefore showed much less respiratory activity in comparison with the P. aeruginosa nadE strain. We hypothesised that this increased respiratory activity could be influential on enhanced biosurfactant yields as well. 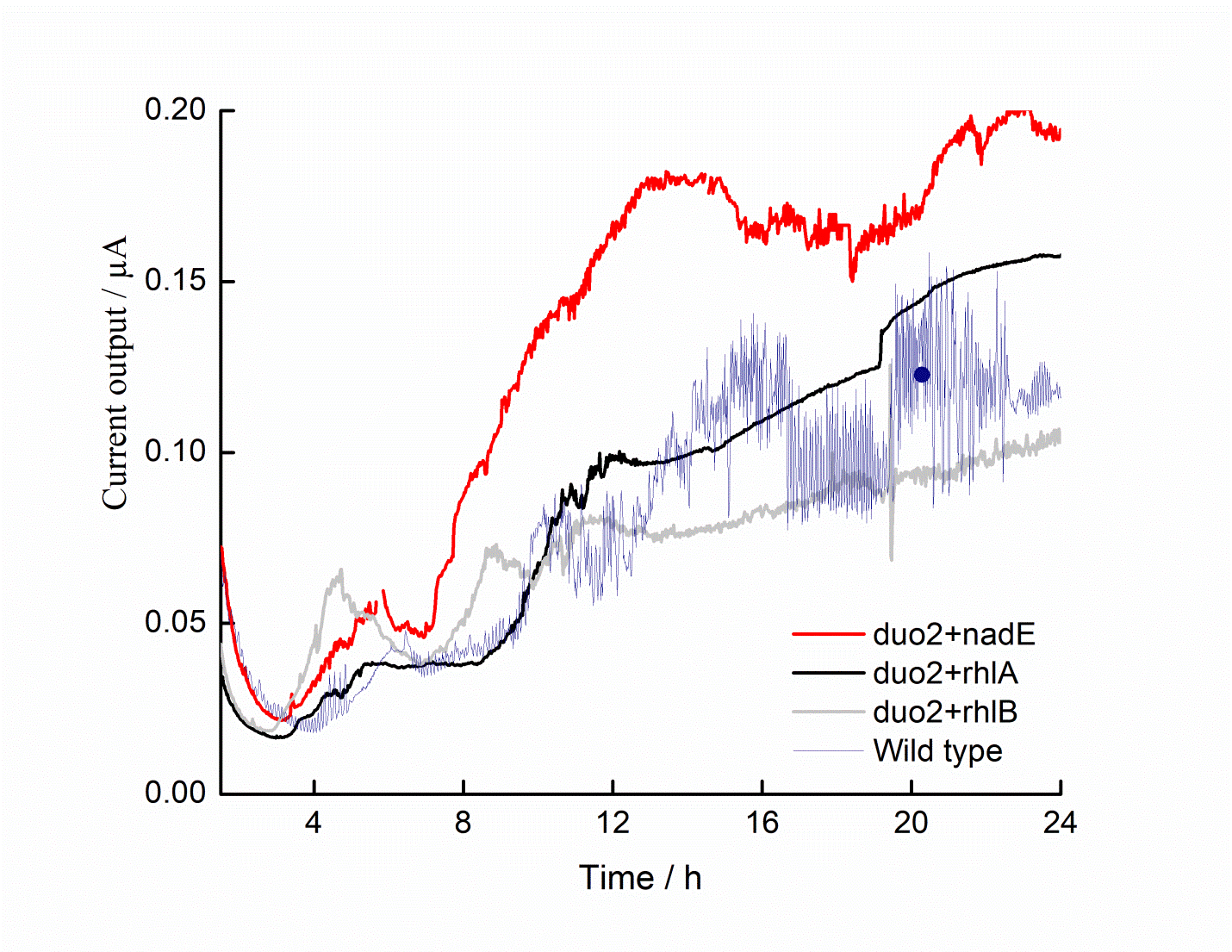 From the data it was observed that all the engineered strains yielded higher current outputs than the wild type strain. In specific terms, the highest current was generated by the P. aeruginosa nadE set up. This data also shows that this strain had the highest respiratory activity measured here as extracellular electron transportation quantified as electrical currents. Over the course of 24 hours, the current production was highest for the P. aeruginosa nadE strain at about 22 hours yielding approximately 0.2 µA. The strain eliciting the second highest current production was P. aeruginosa rhlA (0.16 µA), closely followed by the wild type strain (0.15 µA) and then P. aeruginosa rhlB (0.10 µA). For all the strains, there was an initial lag period between 0h and 3h of incubation. This could be attributed to the initial adaptation time the strains would need to be able to acclimatize with the medium environment before cellular growth and metabolism begins. After 3 h on incubation however, there was a gradual rise in current produced by all strains which directly correlates with improved metabolic activities. 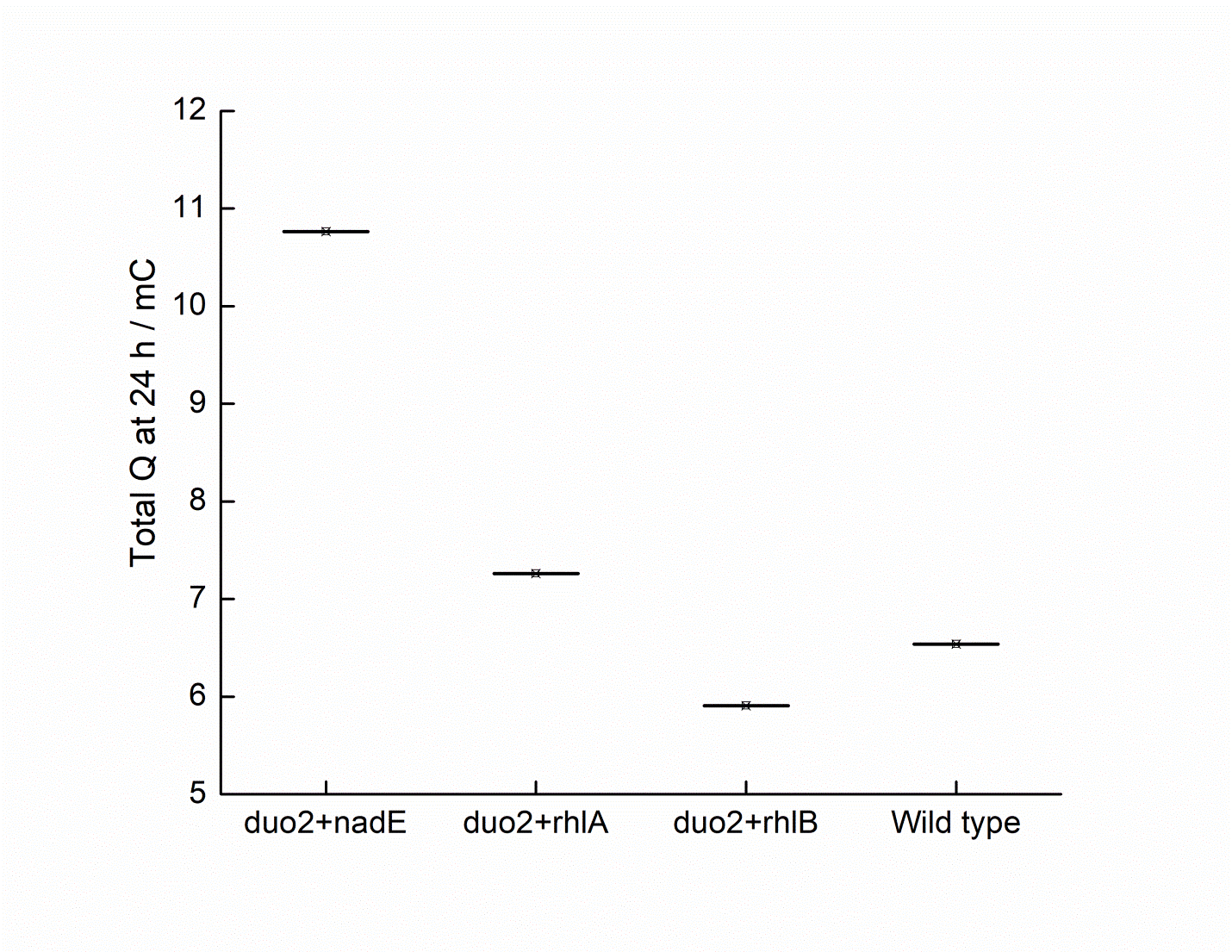 Extraction and analysis of biosurfactant

Table 4.1 Masses of the precipitate from the cell-free broth containing bacterial cell products

After the cold acetone precipitation, the precipitates from each sample were hot air dried. The resulting dried substances were weighted. The average of the obtained values for each type of strain was calculated and recorded in Table 4.1. The largest mass value was observed in the sample from the P. aeruginosa pRGPDuo2 + nadE, while the lowest mass of the precipitate was yielded from supernatant of wild-type P. aeruginosa. From the data it can be observed that the greater production of cell product involving rhamnolipids is correlated with the overexpression of nadE genes. Wildtype P. aeruginosa and P. aeruginosa pRGPDuo2 provided values close to each other. P. aeruginosa pRGPDuo2 does not carry inserted genes; therefore, the production is lower. However, the increased value relative to wildtype can be caused by the additional gene load provided by the plasmid. Strains carrying rhlA and rhlB also show increased production of substances; however, the fact that the yield is lower than from P. aeruginosa pRGPDuo2 + nadE might imply that the overexpression of rhlA and rhlB genes is not enough for the enhancing rhamnolipid production under electrefermentative conditions. 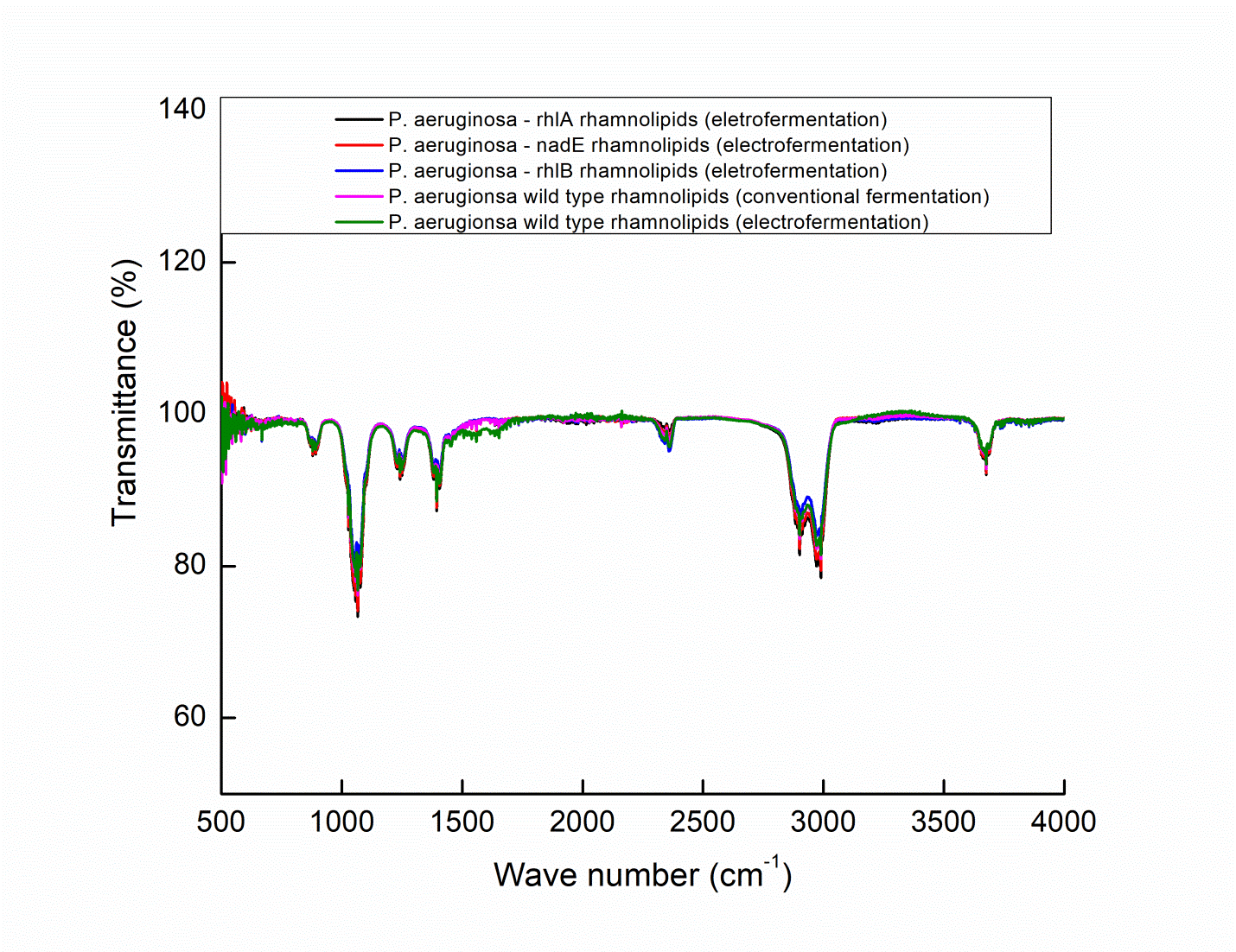 The FTIR spectra of the rhamnolipid products extracted from production setups utilizing all the test strains showed that there was almost 100% uniformity in spectra pattern from all strains, confirming the chemical similarity of the rhamnolipids produced by all the strains.

The spectra bands between 1600 and 1740 cm-1 indicating a C=O stretching was caused by ester and acidic groups. Spectra bands around 2930 cm-1, 2857 cm-1 and 1460 cm-1 were as a result of the symmetrical and asymmetrical stretching vibrations of C–H in aliphatic bonds and aliphatic bending corresponding to lipids. The band on 3430 cm-1 represented the hydroxyl group free O-H stretch as a result of hydrogen bonding. A peak observed around 1380 cm-1 was due to the COO– antisymmetric stretching,

A signature stretching of C-O-C bond was observed at 1042 cm-1 and it was indicative of the rhamnose sugar. This is explained by the fact that C-O-C vibrations in the cyclic structures of carbohydrates were as a result of the presence of bonds formed between Carbon atom and hydroxyl groups present in chemical structures of rhamnose rings. A band was observed around 703 cm-1 which is a signature region identical with rhamnolipids.

These absorption bands were all characteristic of glycolipids, especially rhamnolipids and FTIR spectra are similar to the spectra of previously reported rhamnolipids (Eraqi et al., 2016 & Deepika et al., 2015). 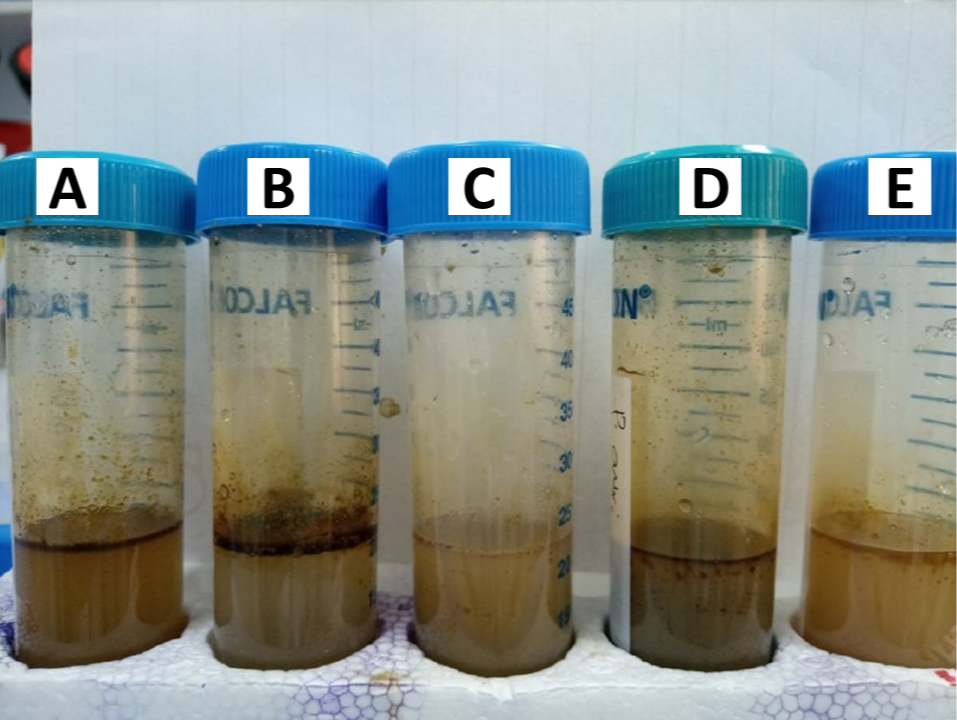 Table 6.1 Analysis of emulsification assay results after 24 hours of incubation

However, as the results have shown, overexpression of nadE gene increased the emulsification index 1.88 times, from 39.53% to 74.23%. It is possible to conclude that the nadE gene overexpression in P. aeruginosa was able to increase the electron pull of the bacteria and elevate rhamnolipid production.