We believe that science communication is an important part of modern research. That is why we have collaborated with iGEM UBC 2021, Vancouver, Canada extensively over the last few months to improve both of our projects cooperatively.

The initial contact between our teams occurred through the official iGEM 2021 “Collaborations” Slack Channel early in 2021. After some emailing we found that our projects had great similarities as both of our teams tried to tackle cancer using Salmonella Typhimurium (Salmonella). For a start, we exchanged ideas and literature, discussed our project advancements, related questions and met in a biweekly rhythm throughout the year from June to October. Further, we exchanged wet lab progress and helped each other out in solving potential mathematical models.

Both teams want to use their respective genetically engineered Salmonella cells to express specific agents and / or biomarkers during the accumulation in tumor microenvironments. Interestingly, both teams found out relatively simultaneously that the lactate concentration is increased in close proximity to tumors due to the altered metabolic state of cancerous cells.

Thus, both our teams decided to use lactate-inducible promoters, called PlldR. We ended up using slightly different promoters. iGEM UBC 2021 used the Salmonella optimized, but uncharacterized PlldR and iGEM HU 2021 used the Escherichia coli derived and already established lldR promoter part (BBa_K1847008). We discussed possible ways to determine the required lactate concentrations for GOI expression in vivo. Two ways we came up with was western blotting and fluorescent assays via the promoter fused GREEN FLUORESCENT PROTEIN (GFP). Furthermore, after designing given parts, we shared the plasmid maps and the assays condition for optimal comparability. 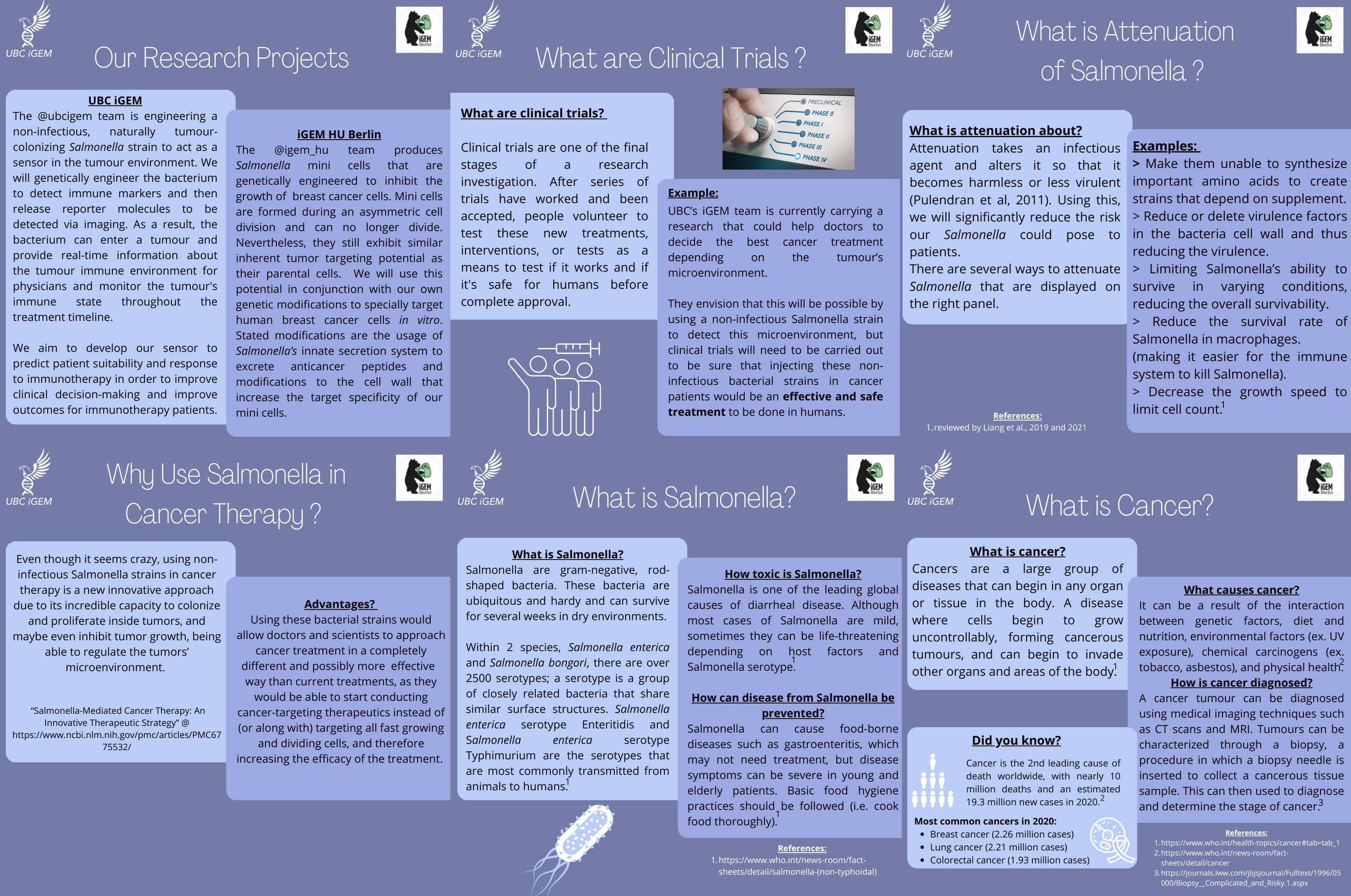 As an additional effort to further our collaboration, we decided to host a social media campaign to raise awareness of Salmonella as a tool for cancer therapy. Our teams researched and created several infographics together to increase the knowledge about this alternative therapy approach. For this, we used sources like the WHO and reviews written about Salmonella-based cancer therapy. Our goal was to decrease apprehensions about the possible use of Salmonella in the human body and to inform about the advantages of this new method, as well as giving some general information on cancer as a disease, common therapy methods and on Salmonella itself. We used short texts and easy language to break down these complex themes for the general public to understand. Both teams posted a series of 6 infographics on their respective Instagram accounts to inform and educate.