Our project began with creating the constructs that would be transformed into the Arabidopsis plants. These included the single guide RNA’s (sgRNA), the CRISPRi and CRISPRa plasmids, as well as our multiplex and ethanol inducible promoter system. 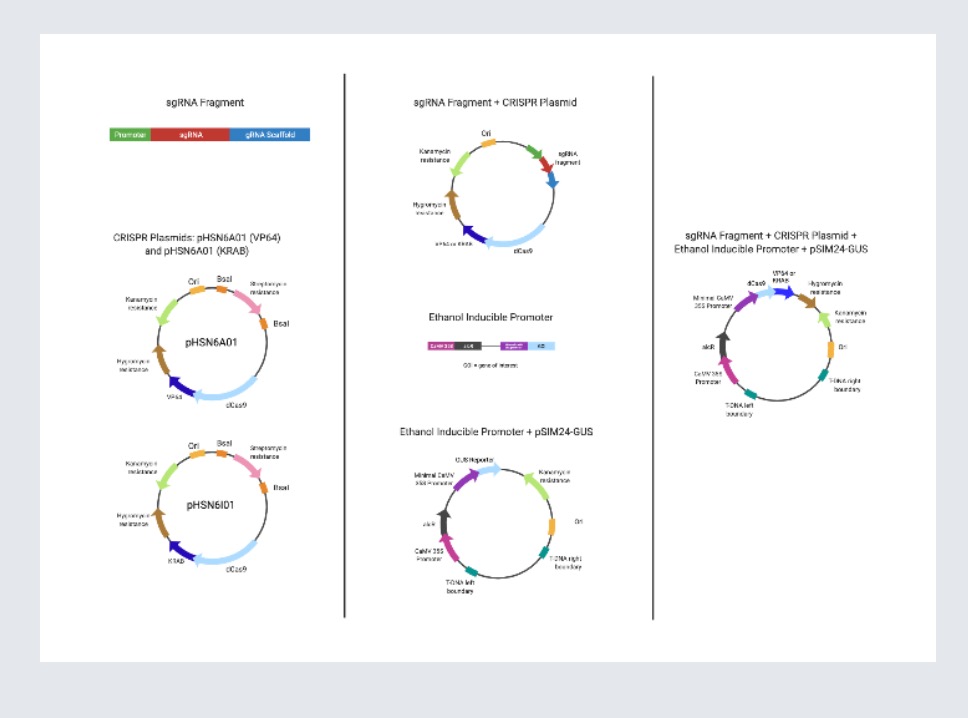 Figure 1: Individual constructs used over the course of the 2021 iGEM Guelph Plant Project.

The ethanol inducible promoter AlcR is being used to put our system under constitutive control. This should allow farmers to turn on and off the expression of our target genes, ICE2 and CLE18, based on local weather predictions. 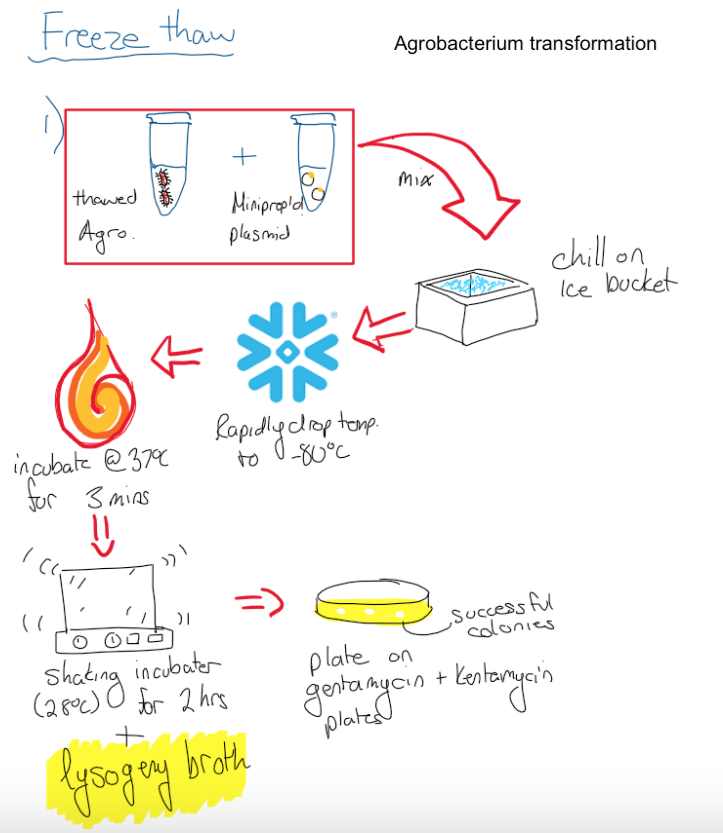 In addition, we would also be working with both sgRNA’s and multiplex systems. Using a multiplex guide would, in theory, allow for greater expression of our target genes when compared to any single one of our gRNA’s. 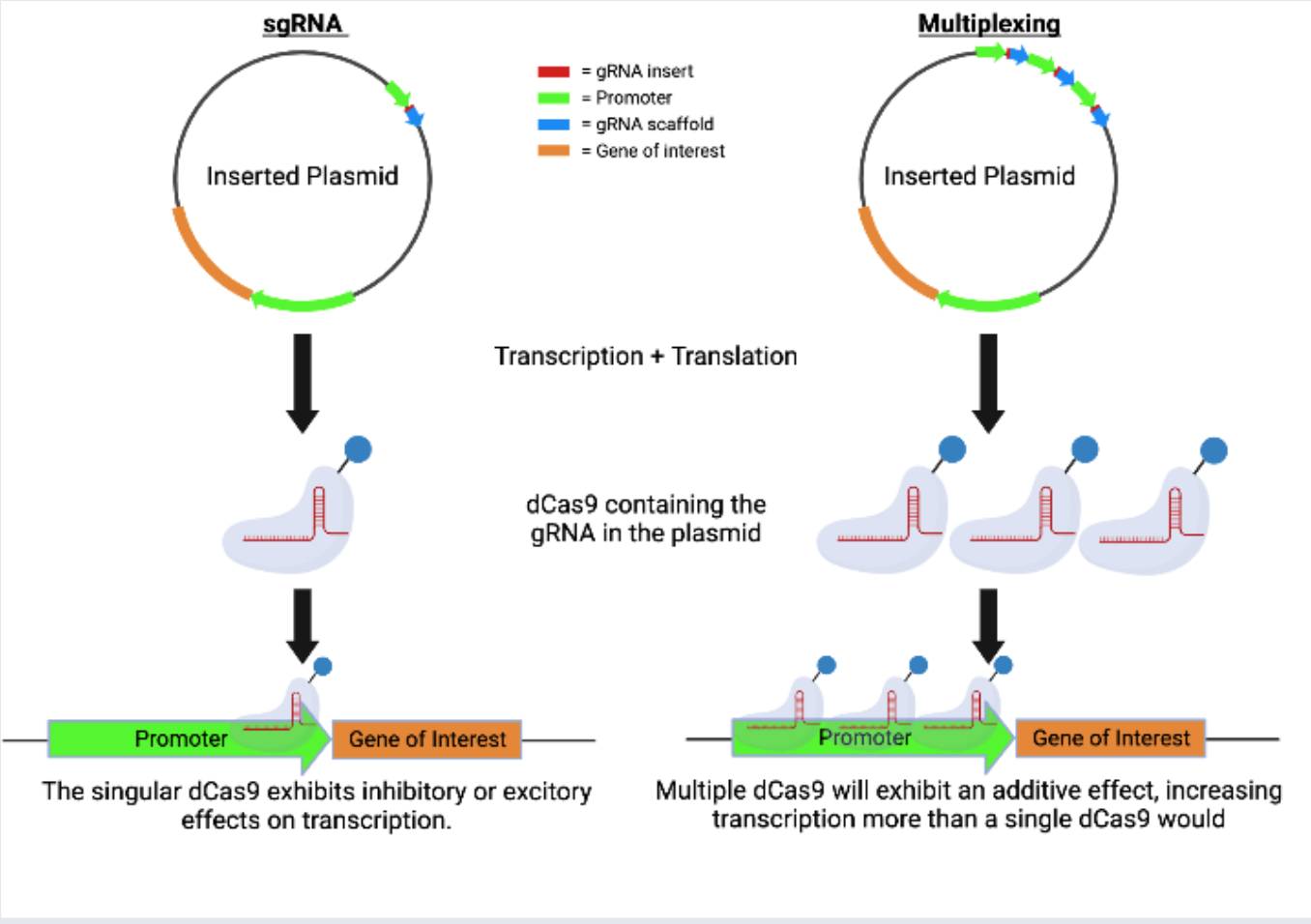 The wet lab began by cloning our sgRNA scaffolds into the CRISPRa and CRISPRi plasmids. This was done using the Golden Gate cloning technique.

Figure 4: The process of inserting our different gRNA scaffolds to the CRISPRa/i plasmids using Golden Gate cloning. Bsa1 sites surround where the scaffold will be inserted to the plasmid, which are cleaved to allow for the insert to ligate into the plasmid. This method removes the restriction enzyme sites from the finished plasmid leading to an irreversible insertion.

Our plasmids were then transformed into first E. coli, and later after confirmation of a successful clone, into A. tumefaciens. Plating of these transformed cells onto antibiotic containing plates allowed us to screen for positive transformants. 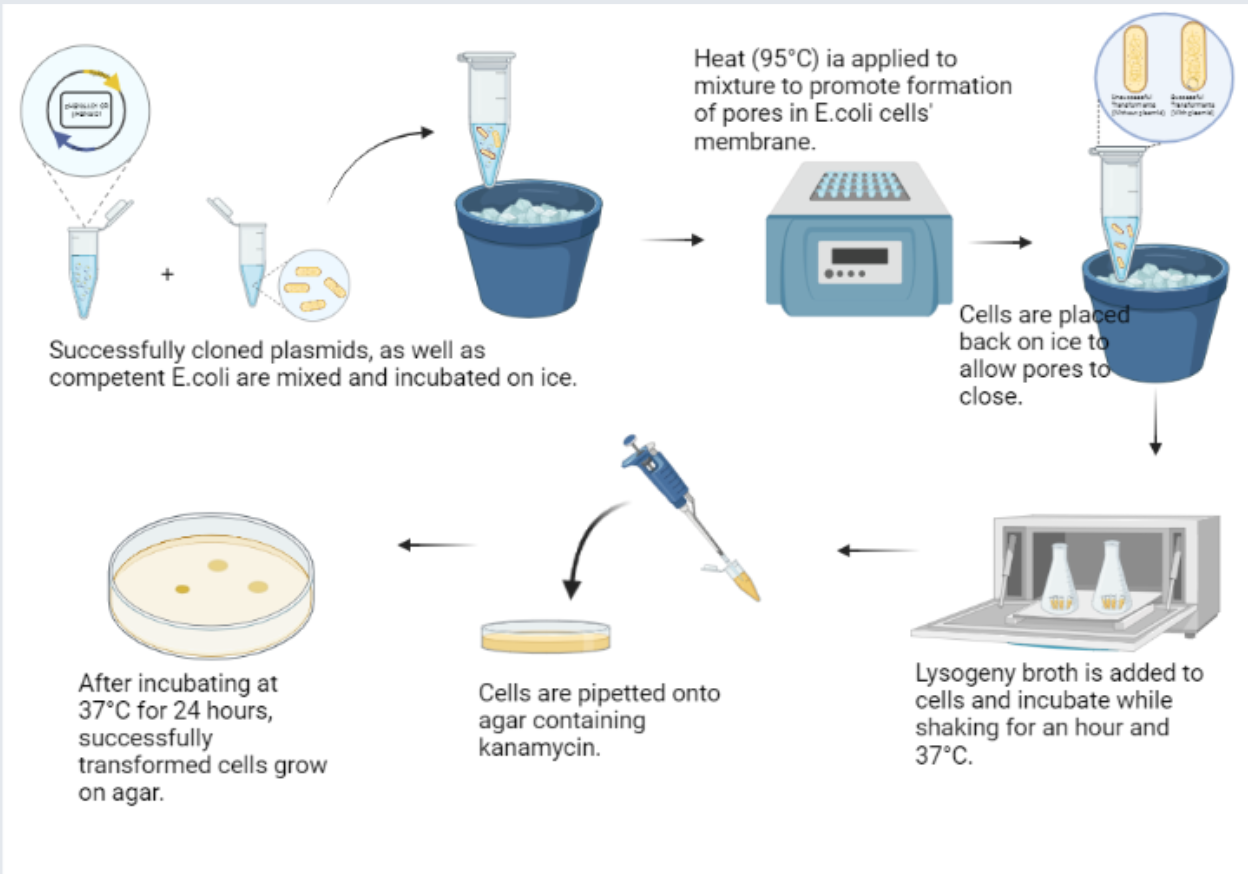 Transformants were PCR confirmed and run on agarose gels to ensure the presence of our plasmid inside the cells. 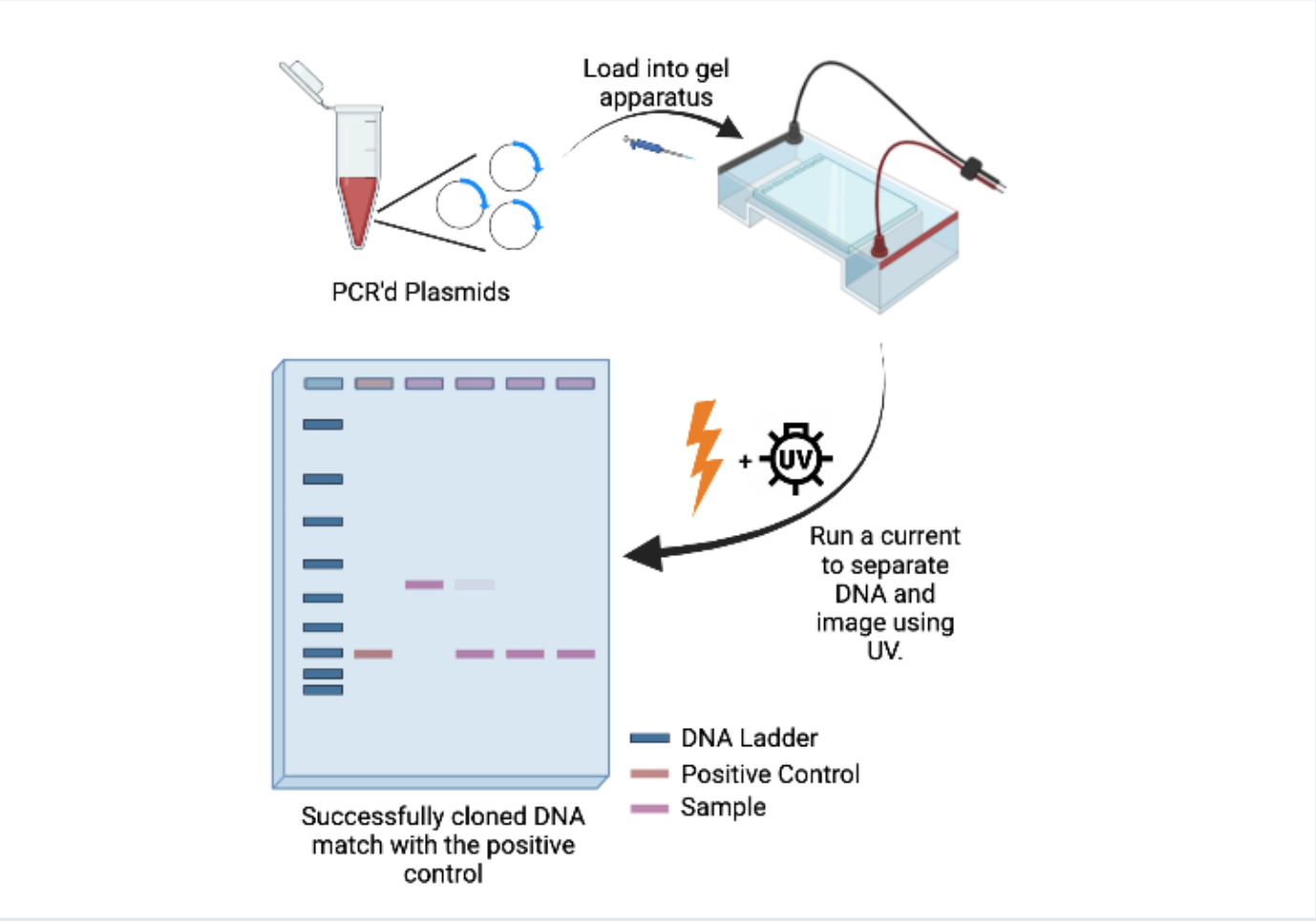 Figure 6: Confirmation of plasmid presence using PCR amplification of transformed cells. The results of the PCR are visualized via agarose gel electrophoresis.

Once we had confirmation of the presence of our plasmid that was successfully cloned, they could then be transformed into A. tumefaciens cells. They would be our vector to transfecting the plasmid into the A. thaliana plants.

Once we had confirmed transformed A. tumefaciens cells, they could then be used to transfect our plasmid into A. thaliana plants. This would be the final stage of transformations for our plasmids. 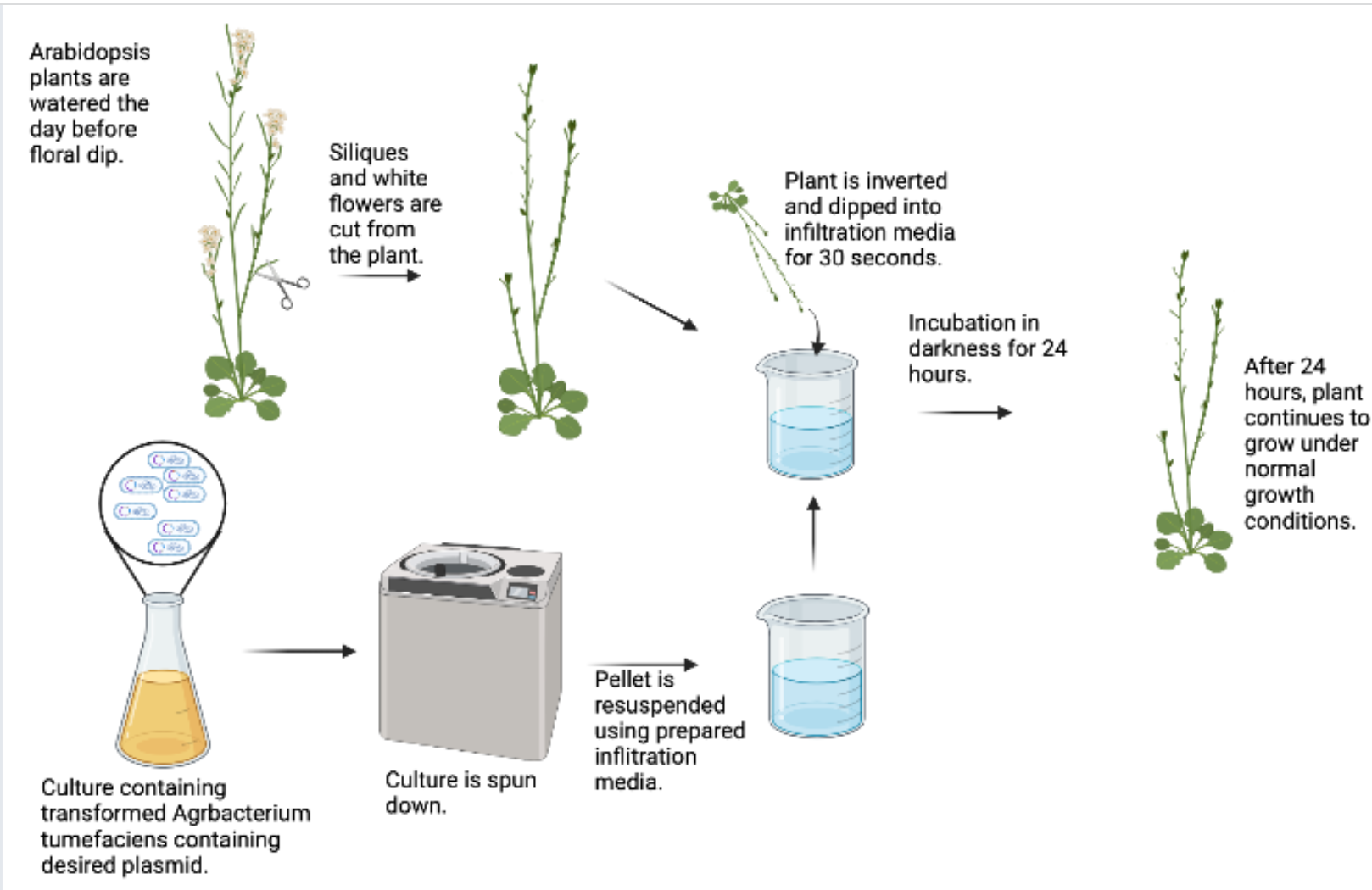 Figure 8: Process of floral dip transformation to insert our plasmid constructs into still growing Arabidopsis thaliana plants. Agrobacterium tumefaciens containing the desired plasmid are suspended in infiltration media to facilitate the transfer of bacteria into the actively dividing seeds.

After the lengthy process of floral dip followed by plant growth, seed collection and sterilization and plating onto antibiotic plates, positive seed transformants could finally be collected for RT-qPCR analysis. This would allow us to confirm whether or not our plasmid has any affect on the mRNA levels from our target genes. 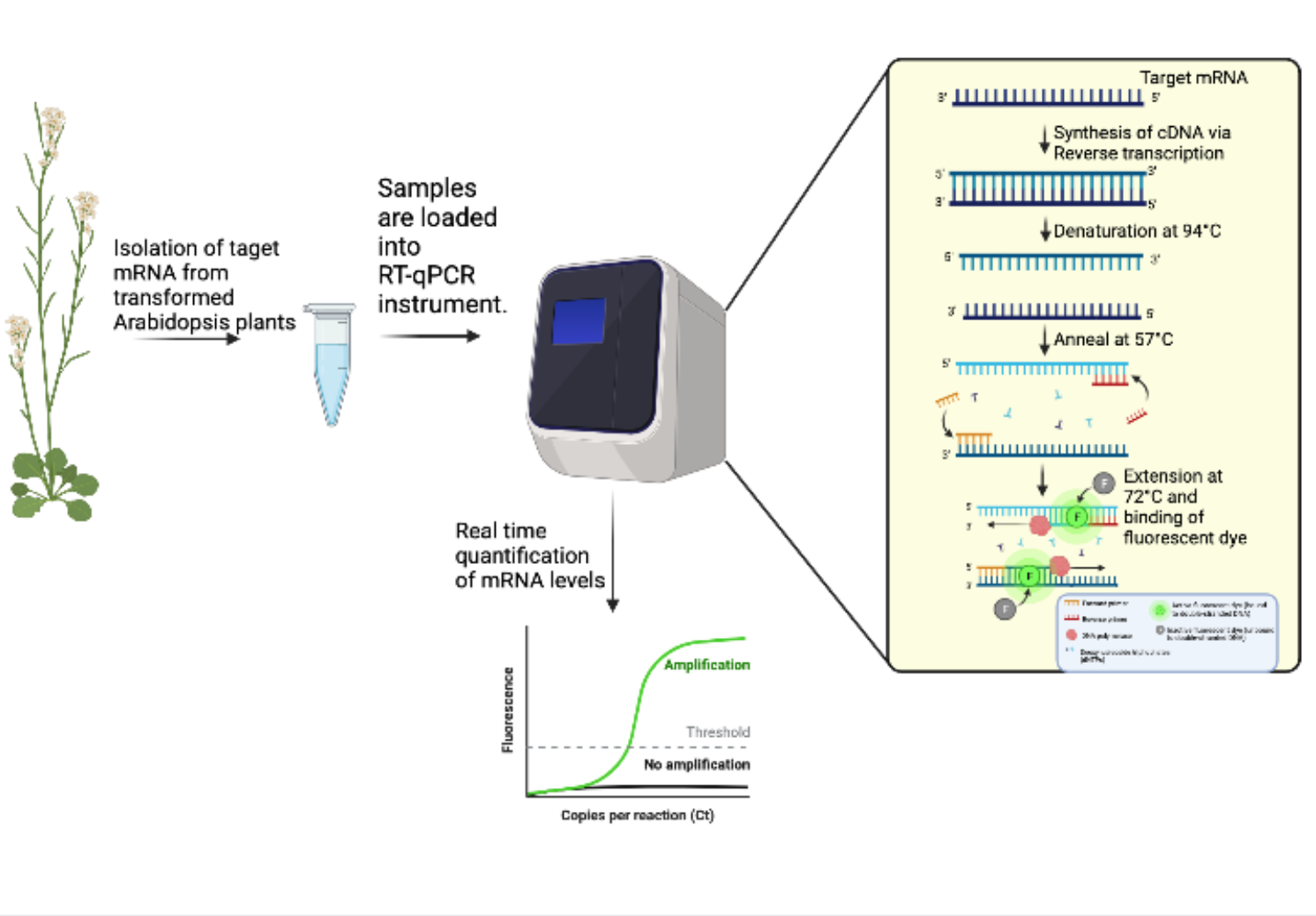 Figure 9: Analysis of successfully transformed Arabidopsis thaliana plants through RT-qPCR. This will allow us to see whether or not our plasmid was capable of increasing the expression of its target gene indicated by increased mRNA levels when compared to wildtype plants.

Our successful A. thaliana transformants could also be visually observed, through phenotypic changes to their root systems and survival under stress conditions. 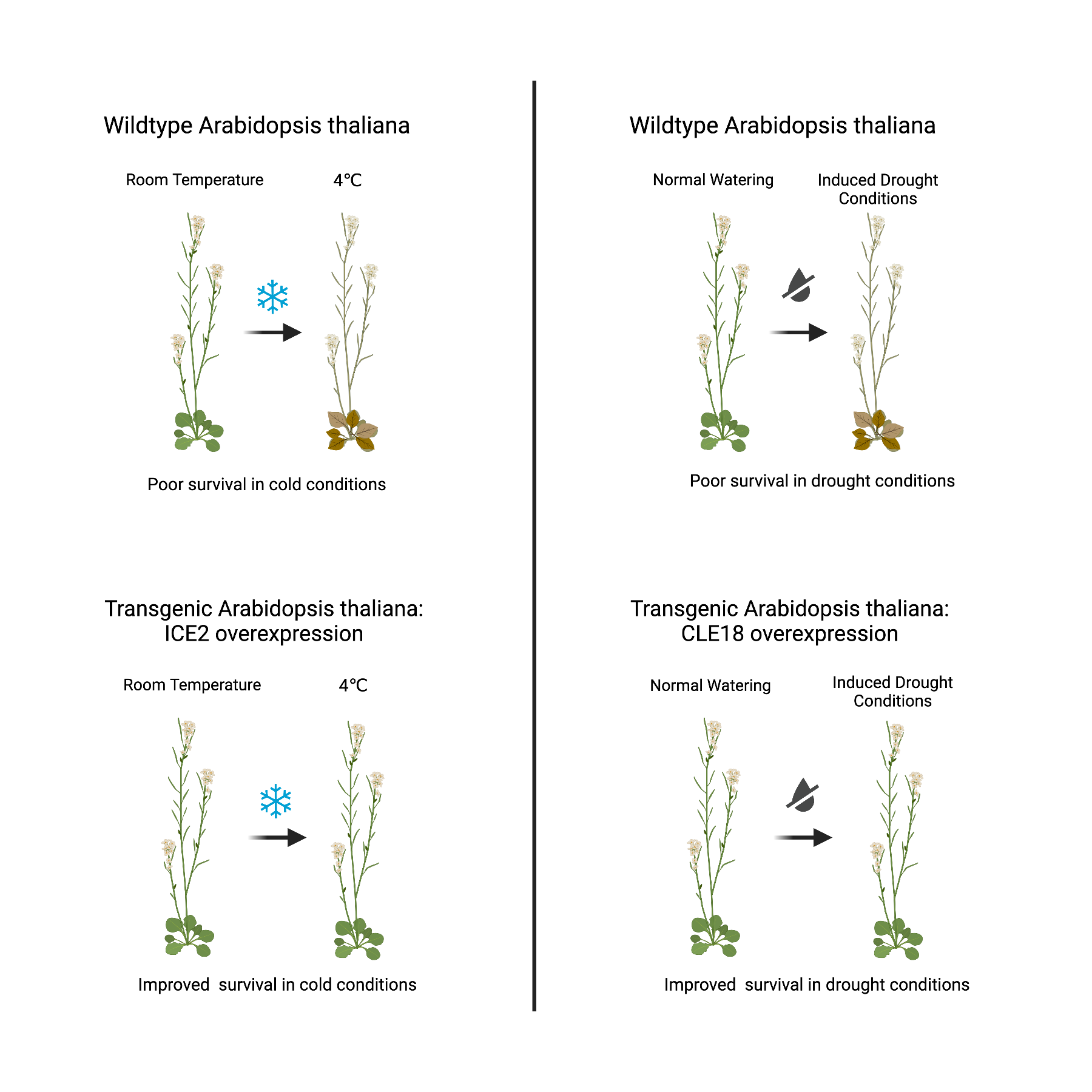 Figure 10: Effects from the overexpression of CLE18 and ICE2 target genes. The ICE2 transgenic plants will show increased survival when exposed to cold stress at 4 °C compared to the wildtype plants. Similarly, CLE18 transgenic plants should show greater survival when exposed to drought conditions compared to the wildtype plants.

Our projected end result would be two plant lines that had the potential to endure greater cold and drought conditions when selectively induced to overexpress the ICE2 and CLE18 genes respectively.