Developing a luminometer and a viable method of miRNA extraction

Building on the ideas submitted by Team BATMAN in 2017, we have not only developed a cheap, effective and easily portable luminometer but also a viable method of miRNA extraction using biotinylated magnetic beads.

We aim to make this a reliable and readily available test for pre-eclampsia in hospitals and GP surgeries.

Our primary focus in Hardware was price- by building our own luminometer into the device, we ensured that this test is much more accessible especially in rural areas and less developed countries.

In addition to price, our focus was also simplicity. We initially considered a completely automated system that would carry out the entire reaction by itself by automatically dispensing, stirring and removing liquids from the mixture. However, we quickly realised that this was unnecessarily complex and that simplifying the design would drastically reduce the number of points of failure; making it much more durable long-term.

Making the device reusable also helped make this device much more environmentally friendly than a disposable kit- we’re sure there's more than enough plastic waste sitting around right now! In addition to reducing the environmental impact, this also allows us to reduce the price per individual test. 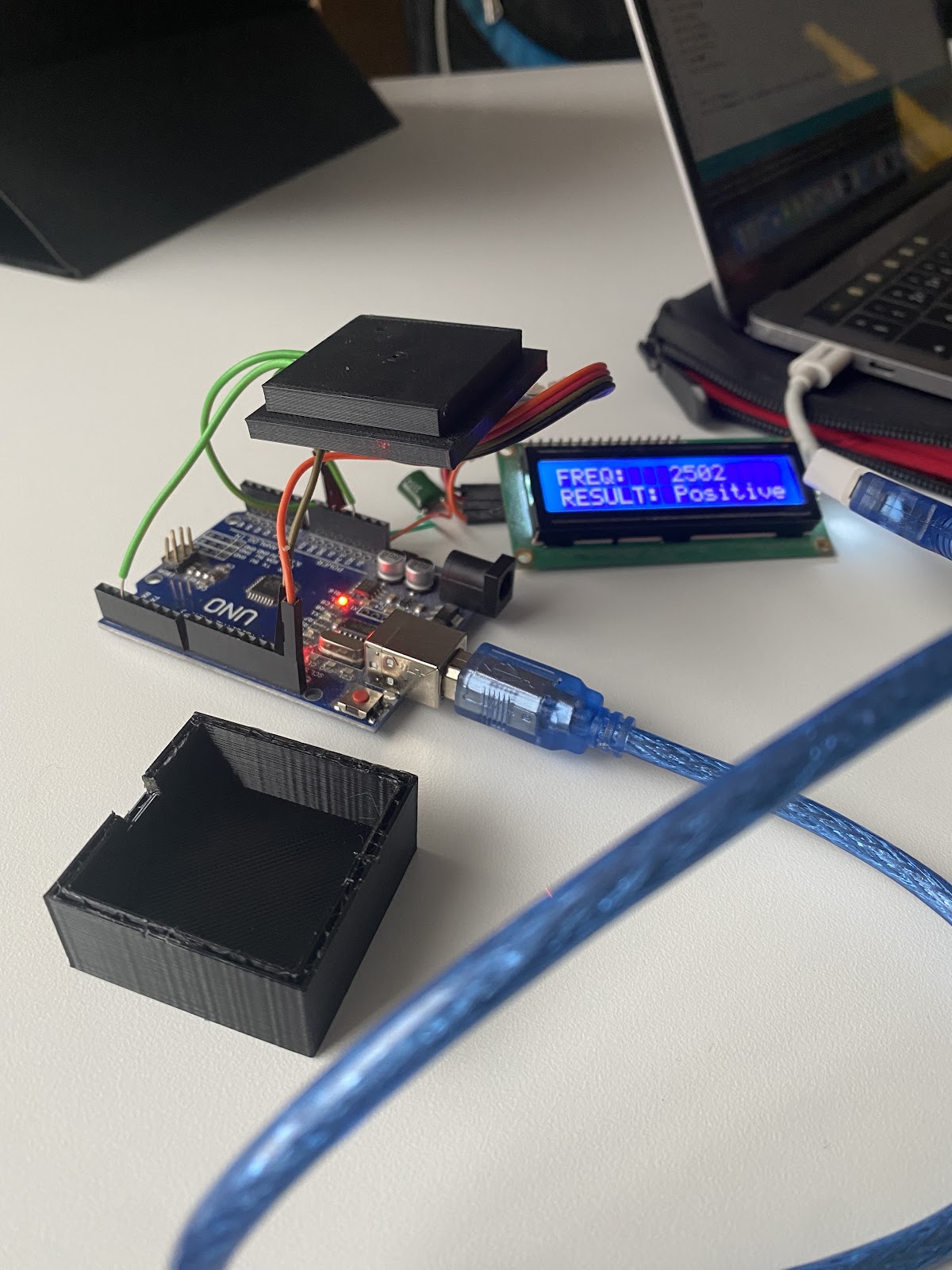 The Luminometer in all its glory

Drawing inspiration from team BATMAN in 2017, we designed and assembled a luminometer to quantify the irradiance of light emitted from the chemical test, and hence the concentration of the target miRNA present in the patient’s blood. One of the main reasons behind designing our own luminometer was the fact that standard luminometers cost hundreds if not thousands of pounds. Requiring this piece of equipment would limit this test to more developed countries with much more well-endowed clinics, which was completely against our core ideas of accessibility to everyone.

The extracted miRNA, in solution, is then amplified isothermally using RPA, to amplify the final result in order to increase precision and make differentiating between positive and negative results easier by amplifying the difference in concentration that needs to be detected.

Our hardware utilises a luciferase assay to determine the result of our test. Luciferase is an enzyme produced by fireflies and other bioluminescent organisms. It produces light by acting on luciferin, a relatively simple compound. When luciferase acts on luciferin, it combines oxygen with luciferin, to produce oxyluciferin in an excited state. When the single excited electron in the oxyluciferin molecule returns to its ground state, it releases a photon of light of wavelength of approximately 550-570nm.

The CDS of our toehold switches codes for luciferase, so when they are activated by the target miRNAs, luciferase is produced, which acts on the luciferin present in the solution, releasing light. We detect this released light using the arduino-based luminometer we designed. Our amplification technique, RPA, amplifies the miRNA linearly so the light released is approximately proportional to the concentration of miRNA of the blood, and the output of the LDR used in the luminometer is proportional to the irradiance. We use this to program a model that calculates the concentration of miRNA present in the blood sample and return a positive or negative result for pre-eclampsia by testing it against threshold values.

The concentration of our target miRNA in the blood is very low, making it difficult to amplify without prior extraction. Keeping in mind cost and accessibility, which are the main goals of our hardware, we quickly realised that we would not be able to use PCR for extraction, and set out to find a cheap and simple alternative.

After extensive research we came across a method of miRNA extraction which utilises magnetic nanoparticles. Magnetic particles coated with bio polymers which exhibit high affinity to total RNA are commonly used to RNA extraction, but due to the small size of miRNAs, these methods are not effective at extracting miRNA, so the magnetic particles need to be specially prepared prior to use.

The magnetic particles are prepared by immobilising antiRNA strands, which are complementary to the target miRNAs, to the magnetic beads. This is done by first synthesising the antiRNA strands and biotinylating them by binding to a complementary DNA template and extending by a fill-in reaction using Φ29 DNA Polymerase,the same way any DNA Polymerase extends an RNA primer in DNA synthesis, but by using biotin-11-dUTP as a substitute for dTTP. These biotinylated antiRNA strands are then immobilised to the Streptavidin magnetic beads by the strong non-covalent bond formed between biotin and Streptavidin. 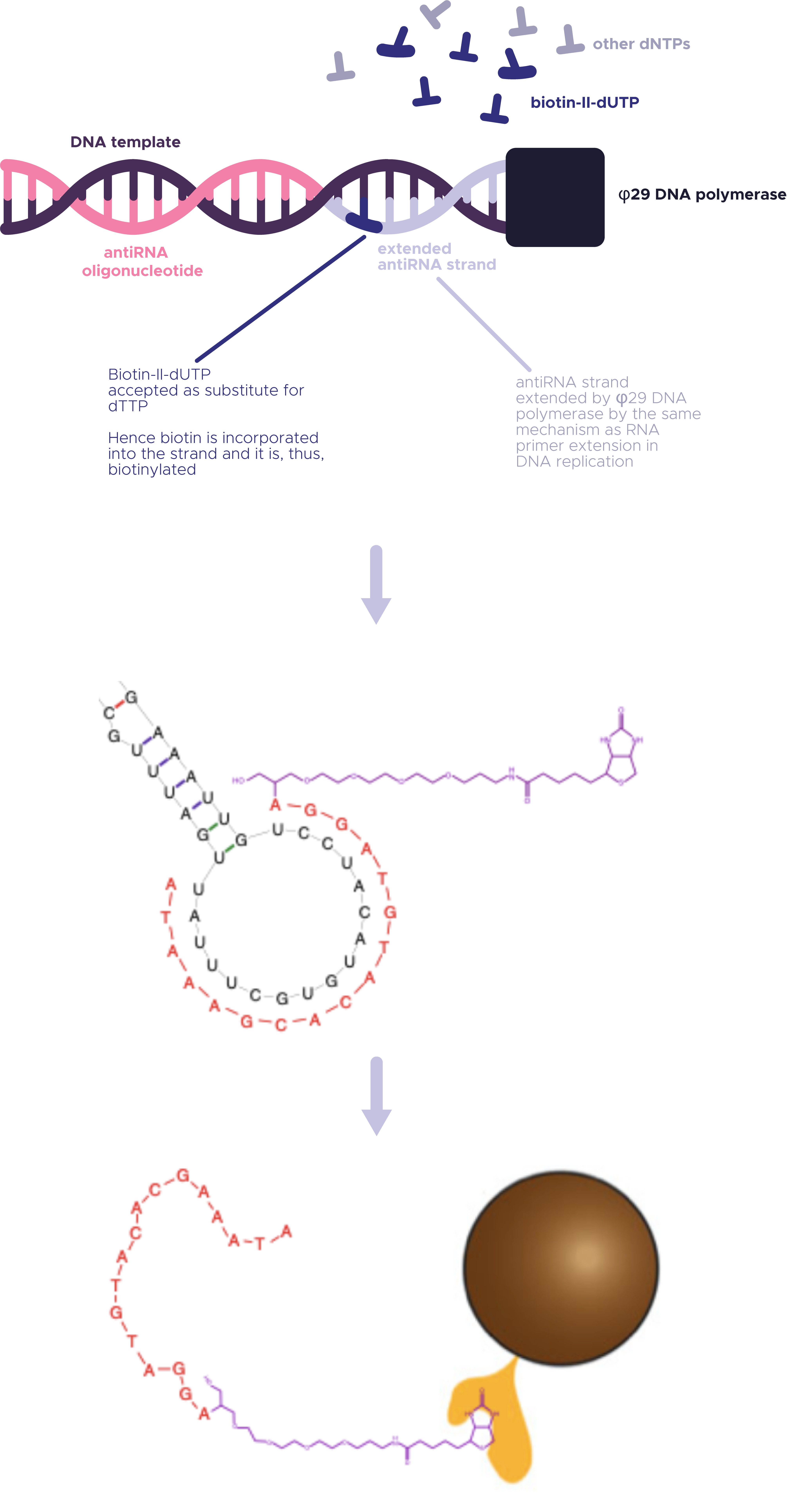 These magnetic beads are added to the blood sample and swirled using 4 programmed electromagnets to increase homogeneity of magnetic beads concentration for more consistent and efficient binding. The target miRNA strands bind to the antiRNA strands on the magnetic beads by base pairing, thus binding to the magnetic beads. After a fixed time period, the electromagnets are switched on to pull the particles to the side of the chamber, and the rest of the liquid is removed. This process is repeated on the removed liquid 2 to 3 times to maximise the proportion of miRNA extracted from the sample.

To help the toehold switches act and produce strong enough results to quantify with a luminometer, we decided to use multiple protocols in conjunction to amplify the miRNA. These methods would linearly amplify the concentration of miRNA of each sample. Due to this linear amplification, ratios of different concentrations of miRNA are maintained; allowing accurate quantification of concentration within blood. The methods we used were miRPA and Asymmetric RPA.

The former of the methods addresses the fact that miRNA cannot be replicated by the suite of DNA replication enzymes. To do this, two DNA probes are added to the miRNA. One probe overlaps and overhangs on the 5’ end and the other overlaps and overhangs on the 3’ end. The 5’ end of the 5’ probe is phosphorylated so that it can be lighted to the 3’ end. From here, DNA ligase is added. This causes the two probes to bind together; it forms a miRNA complex with overhangs on both sides. We then add a forward primer to complement the top (overhanging) strand. DNA polymerase extends this primer and causes a dsDNA complex to be formed with the miRNA replicated within (in DNA form). 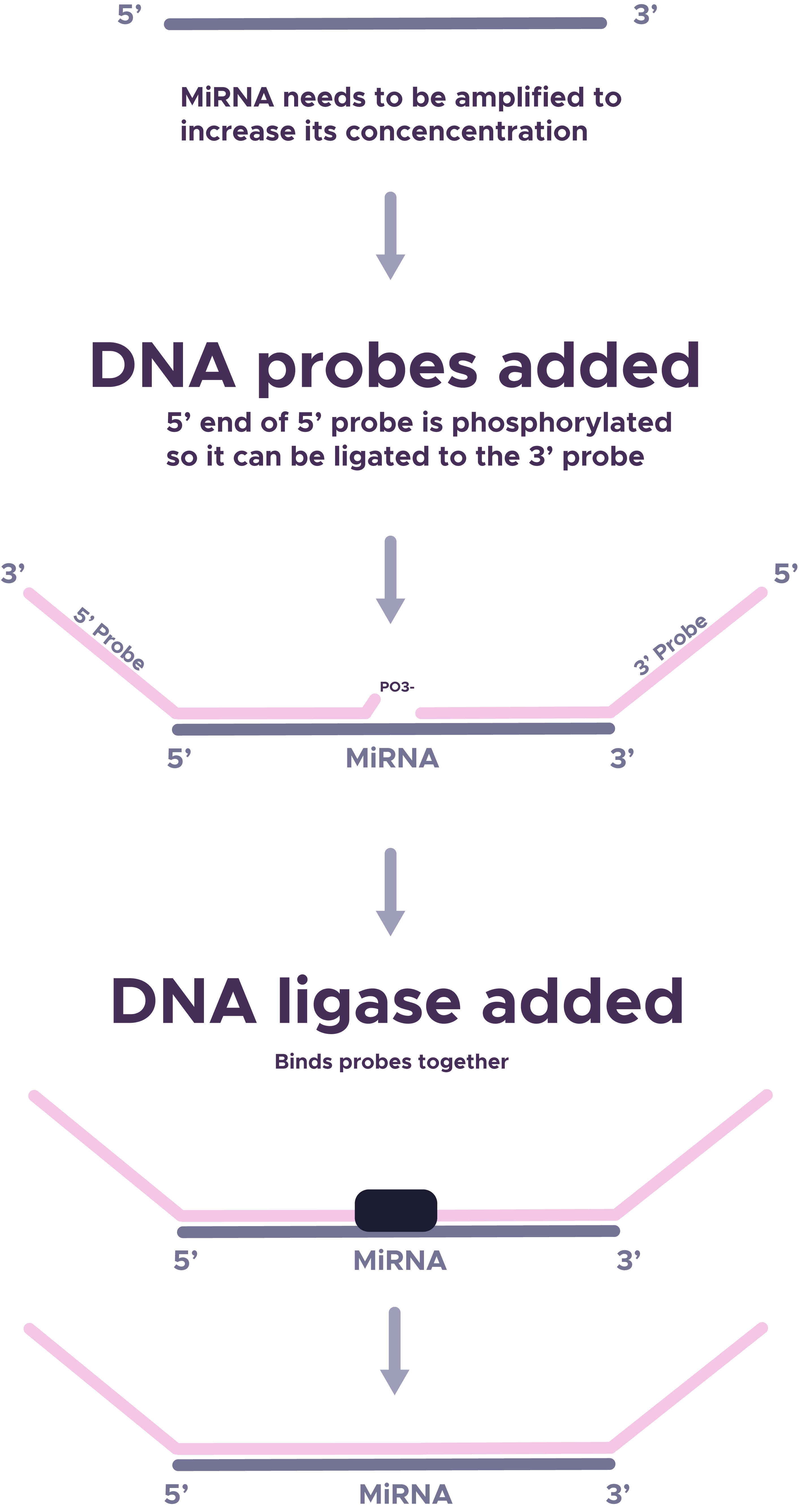 The next method then replicates the gene fragments of dsDNA formed from miRPA above. Now, forward and reverse primers are added in order to replicate the double-stranded complex. Recombinase enzymes form new complexes, on each side of the dsDNA, with both the primers. This allows the dsDNA to be opened and ‘invaded’ by the recombinases. From here, the dsDNA complex is duplicated; the cycle repeats many times to replicate and amplify the dsDNA. Importantly, we added an excess of the forward primer. Since this primer causes the miRNA-embedded strand to be replicated, the miRNA-embedded strand now becomes in excess as well. As such, this strand stays single-stranded and can therefore activate the toehold switch. 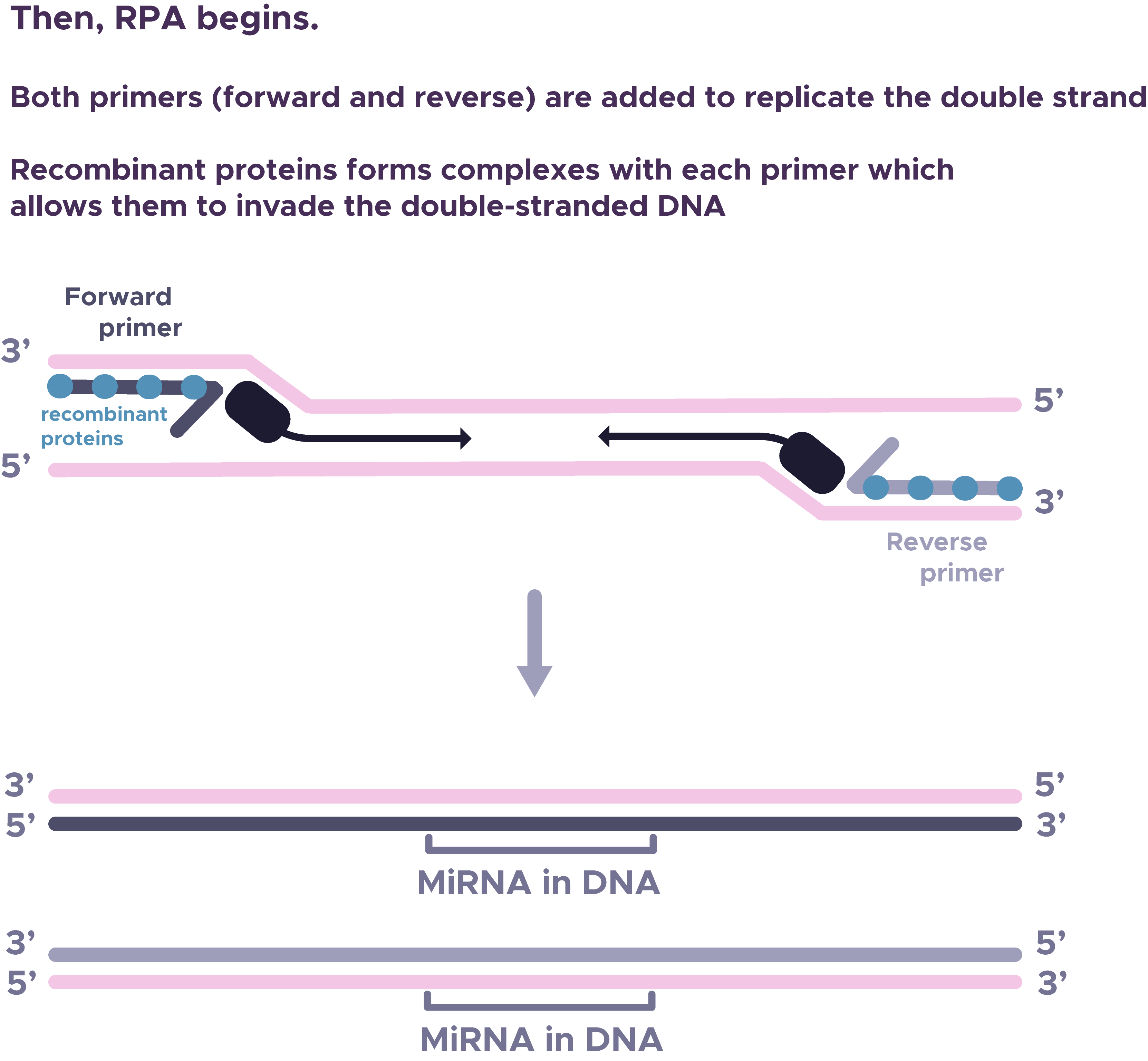