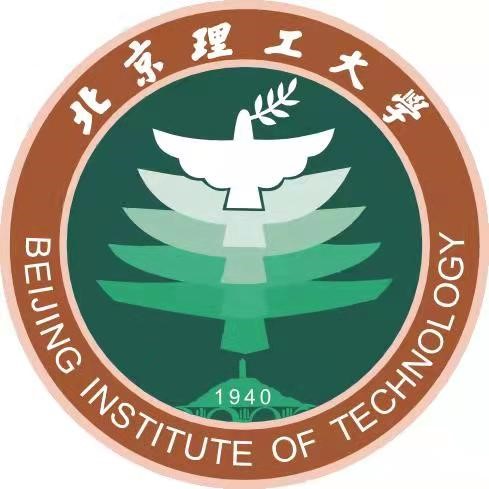 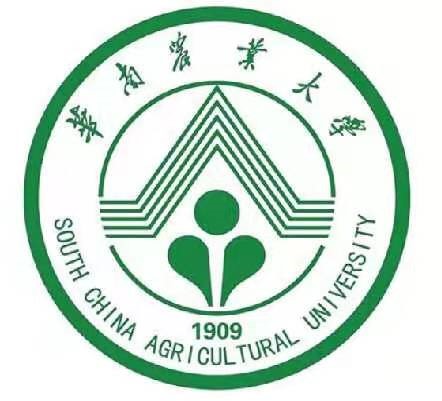 At meet up in North China, we came across that BIT-China will also be into food field this year. After simple communication, we were drawn and moved by BIT-China's creative and promising idea of "taste tester" with SS. cerevisiae as its chassis.Due to the same pursuit for the food field, that is,hoping to develope new food product to solve existing problems，and we also our own understanding and experience of the food field,which is the basis for further and thorough communication. At the same time, there are many places crossing our projects, which can be completed and explored together, and the two teams are both in Beijing, therefore offline communication is much more convenient. So both teams showed a desire for long-term cooperation.

In order to better exchange and cooperation, the two teams discussed and cooperated at various periods and parts of the project to gain inspiration. 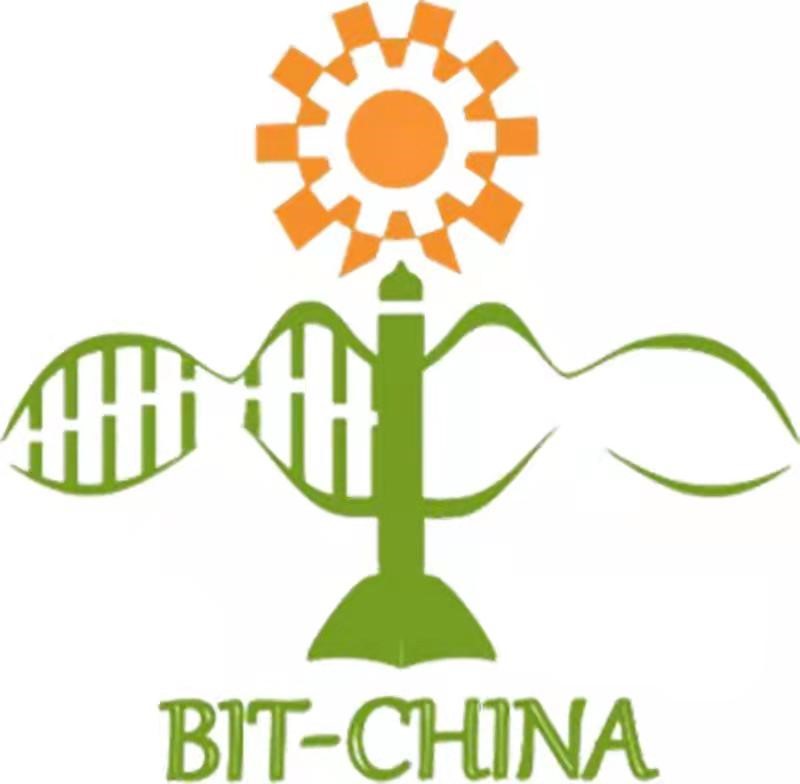 1.Early in the project


In order to further deepen the understanding of partner’s project, the two teams discussed each part of the project and gave the opinions and suggestions. The following are some impressive and enlightening questions and answers.The left side was the team that gave questions; the right was the answers.


About dry lab:
1.Q: What kind of model was used to simulate cell growth on 3D printing?
A: So far a cellular model has planned to explore the impact of scaffold porosity, diameter, rigidity, material ratio and other factors on cell growth, for exploring the optimal conditions.

About the background:
1.Q: Why did you think of using cultured meat as the food source for Mars immigrants? What advantages does it have over other kinds of food?
A: First of all, under the objective situation, Mars is relatively lack of environmental resources.It's not difficult to see the advantages of growing meat by considering the necessary dietary needed to provide plant meat for Martian immigrants. Cultured meat covers an small area , can be controlled well, and can be produced on a large-scale after the technology is mature.In extreme environments like Mars, there are advantages that traditional livestock husbandry cannot match.

2.Q: From what respects can the launch of cell culture meat reduce greenhouse gas emissions. Will the complex culture process not consume more energy and produce more greenhouse gases?
A: As animal husbandry，it mainly occupies a lot of agricultural land and a lot of feed needed to be provided . A higher meat ratio means that more land needs to be consumed to produce an equal weight of meat，comparing animal husbandry with cultured meat .The occupation of land by animal husbandry itself, coupled with the occupation of land caused by feed planting squeezing the coverage area of green plants, indirectly increases carbon emissions，which won’t happened if we produce cultured meat.

3.Q: How to solve the safety problem of cell meat food culture?
A: In fact, the current food safety problems are mainly derived from the immature technology, and the cell culture process is still unknown.We believe these security problems can be solved as the technology developing.

The questions BIT-China asked about our project, made we consider whether there is any logic of experimental design need to be optimized and how to optimize.It also made us think, how to prove that the production of artificial meat can reduce greenhouse gas emissions and how to ensure food safety, these have become one of the topics of our follow-up interviews.

2.Medium term of the project


After a period of experiments, BIT-China and us made subtle changes to the planning of our respective projects according to the degree of the experiments and the new inspiration , and initially established the type of track .Due to the impact of the epidemic, we held online meetings to better communicate. The meeting process and content are as follows:

The first stage of the meeting, the two teams each introduced the current revised overall framework of their project: our project is based on Mars immigrants, and looking forward to solving the future food based on certain degrees of environmental problems caused by traditional animal husbandry.Also,we added the thinking of the artificial meat as a new food product to meet the need of consumer demand; BIT-China is planning to build a biosensor with S. cerevisiae as the chassis cell to detect the sweet proportion of food and some of the bitter taste substances as "taste inspectors and its exclusive seasoning",in order to provide better vegetarian choices based on. They also add the application thinking of preserving the taste of delicious Chinese food.

In the second stage of the meeting, the two teams carried out detailed discussions on the current projects of the both sides, and found that the goals and expectations of the two sides highly overlapped in many parts.Thus we formed the idea of cooperation in multiple parts.

At the same time, the two sides also exchanged ideas between the two teams of human practice(hp). We suggest that BIT-China can take various forms of hp;BIT-China gave us hp suggestions to consider the practical feasibility and the significance of the project.

At the same time, through consultation, the two sides have formulated cooperation plans and implementation rules in the five aspects including popular science education, social practice, art engineering, modeling and experiments.Meanwhile, the new idea of constructing food safety evaluation system is proposed. 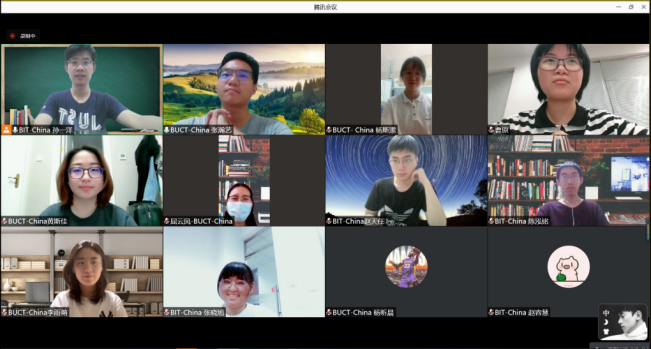 The following is the communication and cooperation experience between various parts of both parties in the middle term of the project:

The two teams are both universities in Beijing and have some studies on the field of food. Therefore, we jointly held two related science popularization to communicate and spread our experiences.
Visit the Enducation for more details：
https://2021.igem.org/Team:BUCT-China/Education

In this stage , the cooperation of the social practice is mainly about helping each other to expand the samples ,in order to obtain richer statistical results and feedback.

The experimental groups of the two teams held many meetings to communicate the problems encountered in the experiment and some doubts about each other's project experiment.Some inspired as follows:

BIT-China→BUCT-China: BIT-China raised some questions about cell passage culture.In response to this regard, we answered that cell source was extracted from chickens for about 30 days and subcultured for 3 generations carried for differentiation culture. The estimated success rate of the experiment was large.

BUCT-China→BIT-China:We proposed that the sweet receptor and Fresh flavor receptors are heterodimers, whether the assembly is assembled intracellular and positioned or directly on the membrane. BIT-China responded that the current experimental protocol of intracellular assembly and positioned on the membrane because it is difficult and has low experimental success rate. 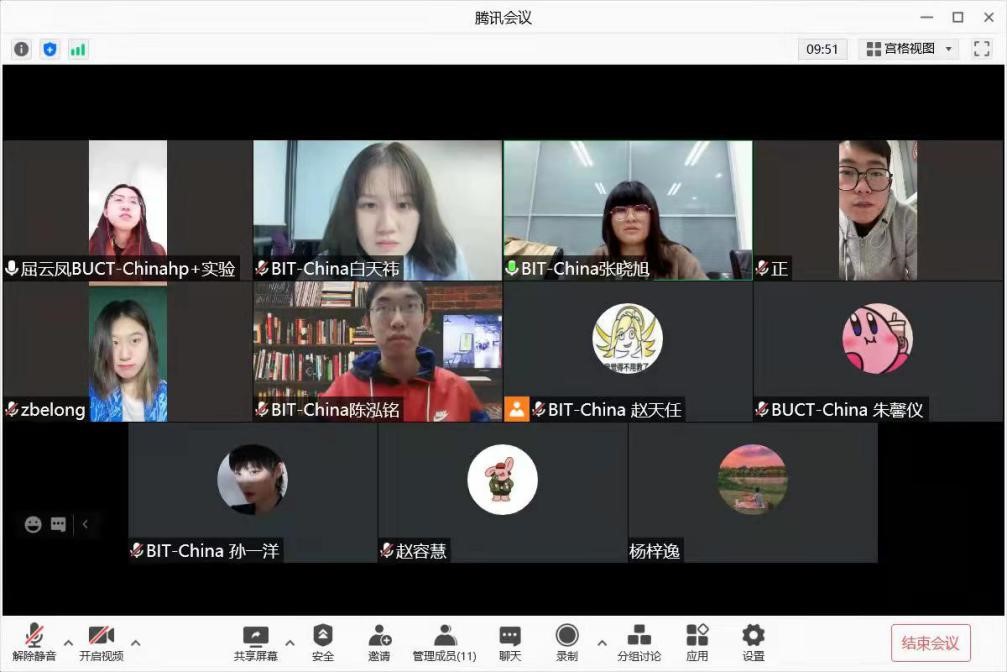 The construction of food safety system mostly adopts hierarchical analysis method or fuzzy comprehensive evaluation method, and the main indicators are based on the description of material hazard characteristics, intake assessment, risk characteristics description and other aspects. Yang Yang from BUCT-China put forward, the hierarchical analysis or establish the model of food safety evaluation system priority is we want to obtain enough real data, therefore, the two groups of students for the later modeling work made specific planning, two teams first looking for their own products need evaluation indicators, after discussingand looking for common indicators, the next step will be taken.

In addition, it is worth mentioning that at this meeting, we shared some gains about modeling at the CCiC meeting and proposed that the ideal modeling should come from real experiments, and repeatedly revised and fit the experiment and obtained data; and the model we finally established should be helpful to the experimental model.This view, well, promotes the modeling work of the two teams.

According to some exchange experiences in the medium term, the two teams shared their modeling scheme and exchanged views with each other.

BIT-China→BUCT-China:
BIT-China proposed that the "cultured meat skeleton" model of BUCT-China has a high application value.According to the different structure, cross angles, porosity, skeleton diameter, by computer simulation to determine whether meat can grow better, thus saving more time for the experiment. 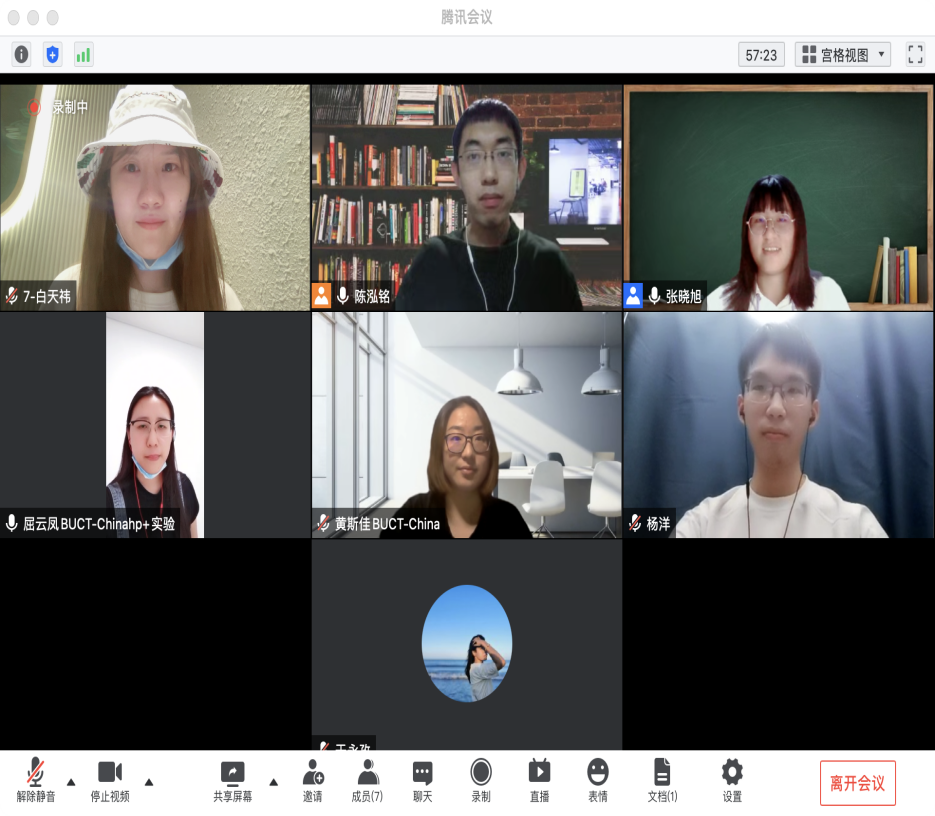 
After consultation between the BIT-China team and the BUCT-China team, we believed that avoiding the form of large group discussion and adopting the form of group communication is more conducive to the exchange opinions, and can better improve each section.Based on this decision, the later communication basically conducts online meetings in group mode.

In the later stage, most of the two experiments have been carried out, and some of the ideal experimental results were obtained.However, there is no denying that we still encountered some thorny problems in the experiment. The two sides communicated on the difficulties in their respective experiments and put forward their own suggestions.

We also had an exchange between the art group students, the students of the two teams expressed their views and talked, we all benefited. 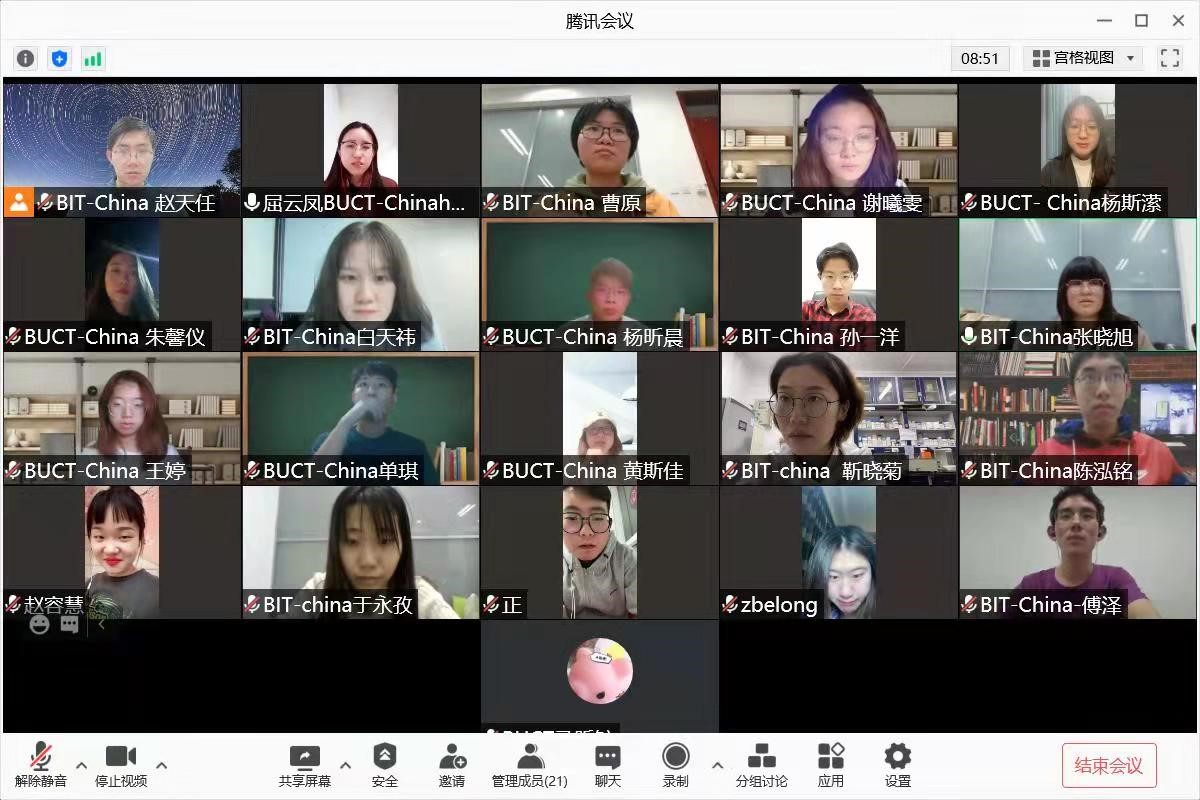 The two teams helped each other in terms of the advantages of each group and achieved certain results.

In order to diversify the artist design of the two teams, we performed a combination of artists.


Our collaboration with SCAU-China began in May 2021 with equally consistent attention to environmental issues . And we are also attracted by the ingenious design of the SCAU-China project. At the same time SCAU-China sent messages for help with protein molecular dynamics, and later hardware-related issues.We then contacted SCAU-China to help each other. 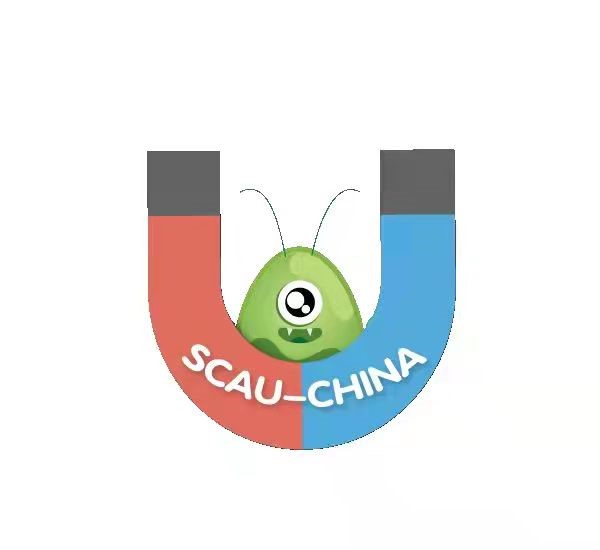 
In the early contact, we conducted online meetings to have a deeper understanding of the other party's project.At the same time, we propose that SCAU-China can adopt molecular dynamics simulation to better grasp the nature of its target protein; we suggest that they can add power system to the original device to improve its flexibility in the water.Our proposal was approved by SCAU-China and ultimately adopted. 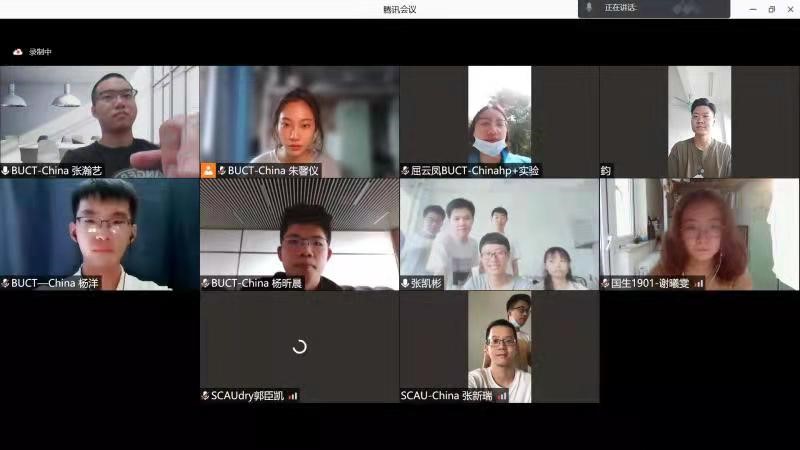 2.Medium term of the project


In the middle of the project, we mainly communicated on experiments, popular science, and social experiments in the form of online meetings, exchanged the problems encountered in the process of the project and made certain suggestions on the other side's problems.


Based on the understanding of both projects, we found the same demand for device and scaffold materials, so we focused the experimental cooperation on the application development of PHFA we synthetised , where we have built the fixtures of SCAU-China algae bodies. After receiving the product we sent ,SCAU-China began to test the function of the product with the microscope. By observing the distribution of the algae in the material, they told us the good results of our installation.


We held a science popularization activity together with SCAU-China, FAFU-China, mainly for college students in southern China.
Visit the Enducation for more details：
https://2021.igem.org/Team:BUCT-China/Communication


Since the location of SCAU-China is southern China, which gives a more diverse sample of our social survey,.Therefore the cooperation in social practice focused on the mutual forwarding of questionnaires.
Visit the hp for more details：
https://2021.igem.org/Team:BUCT-China/Human_Practices

3.Later stage of the project


Later on, for insight into our project, SCAU-China provided us with the suicide genes they developed, suggesting that we could use it to do work on reducing costs and improving productivity, which was adopted by us.
Visit the design for more details：
https://2021.igem.org/Team:BUCT-China/Implementation