Learn more about our modelling approaches to Dispersin B

Aims: To estimate the efficiency of our engineered bacteria at reducing formation of pathogenic bacterial colonies.

We set out to model the amount of dispersin B our engineered bacteria might be capable of producing in our catheter coating. Dispersin B degrades biofilm which is produced by pathogenic bacteria and helps to keep them alive. Our dispersin B will be secreted from our system in response to a molecule known as autoinducer-2 (AI-2) which is produced by pathogenic E. coli. Thus in our model we needed to model bacterial population, AI-2 production, dspB production and the relationship between dispersin B, biofilm and cell survival.

We were successful in creating the necessary equations to model our system, however we did not gain an accurate estimate of our engineered bacteria's ability to reduce the growth of pathogenic bacteria due to the presence of too many unknown variables. However after identifying these variables we created lab protocols that future times could use to characterise these variables and consolidate our quorum-biofilm model which could be used by future teams.

Equation 1 describes the rate of change of protein concentration produced by the Lsr promoter. Specifically this equation refers to the LsrABCD operon however in our model we assumed this concentration would be the same for our recombinant protein.

Equation 2 is describing the rate of change of a hypothetical Lsr-regulator molecule suggested to exist in the source literature. [2]

Equation 3 describes the rate of synthesis of LsrR

This equation describes the concentration of phosphorylated AI-2 inside the cell. This is contributed to by flux of AI-2 through the LsrABCD channel complex and alternative pathways. Ap is depleted by AI-2 binding to the LsrR protein and the theoretical Lsr-regulator molecule.

Equation 5 gives us the rate of decrease of the exrracellular AI-2 concentration, this assumes that we have estimated an initial concentration of AI-2 which is not very realistic. In our model we added equations to describe bacterial concentration and AI-2 production, further details can be found here:https://2021.igem.org/Team:Manchester/Model

This equation gives us the rate of change of the Lsr-regulator/AI-2 complex.

This equation gives us the rate of change of the LsrR/AI-2 complex.

Constants r and c are adjusted from: https://doi.org/10.1016/j.fm.2004.01.007 . This equation describes the growth of pathogenic bacteria. With the second term being negative and refereing to the fraction of bacteria which are exposed and not covered by biofilm (Bexposed), and thus more likely to die at rate (kdying).

This equation describes the rate at which biofilm is broken down/created and thus the fraction of exposed bacteria (exposed refers to bacteria that are not covered by biofilm). This of course relies on the concentration of dispersin B and the rate at which bacteria produce biofilm.


We input these equations with the following parameter values:

For each of the unknown parameters, we have chosen the mean estimated values in a way that produced the oscillating behavior of the bacteria and DspB protein, i.e. our system is on the edge of working efficiently. To analyse the influence of each parameter on the calculation results, these parameters are selected from a distribution of values that are evenly spaced from an arbitrarily-set range around their mean estimated values. When performing the calculations, we have kept all other parameters at their average values while varying one of the four estimated parameters. The results from this can be seen in the following four graphs: 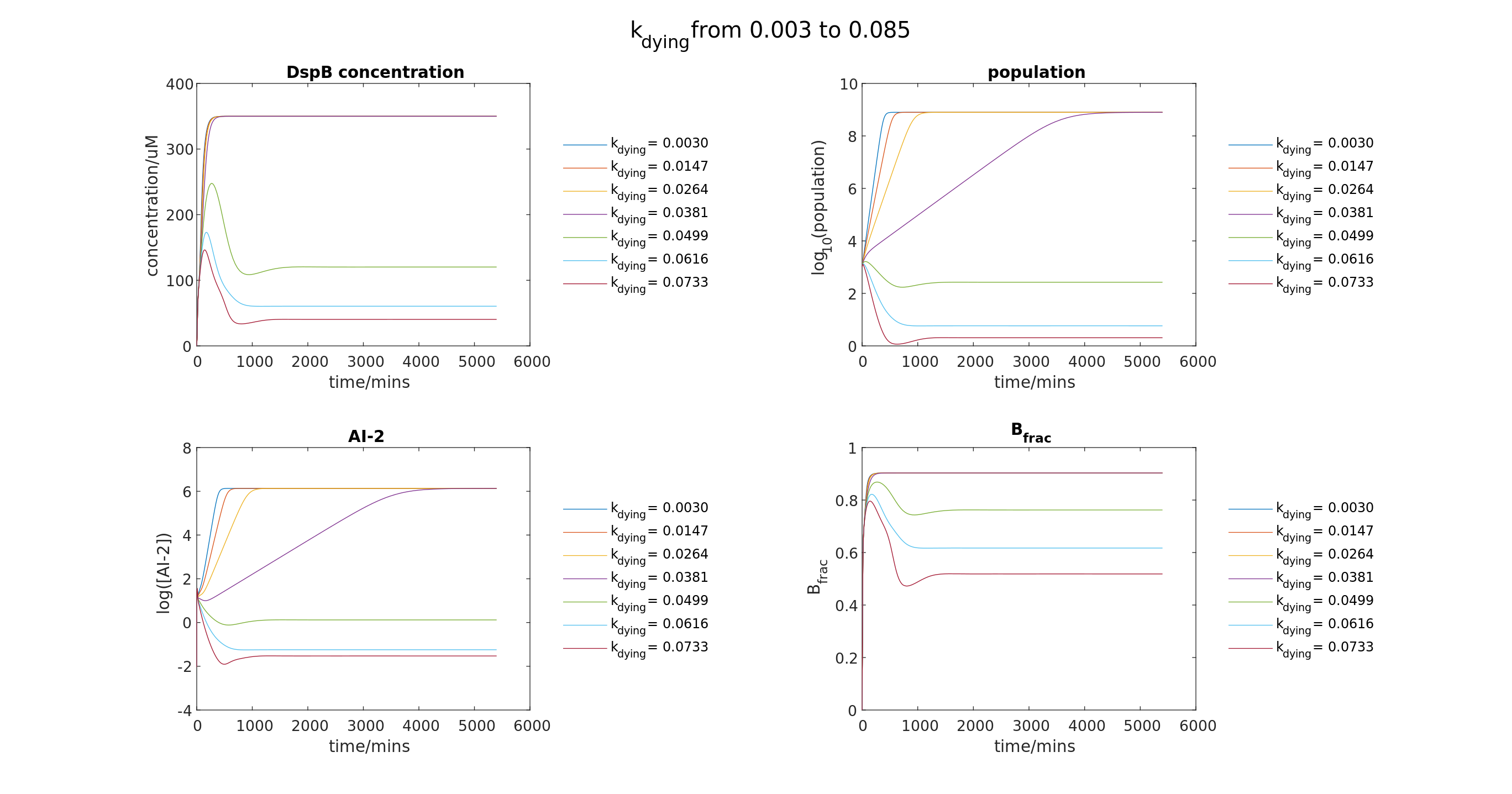 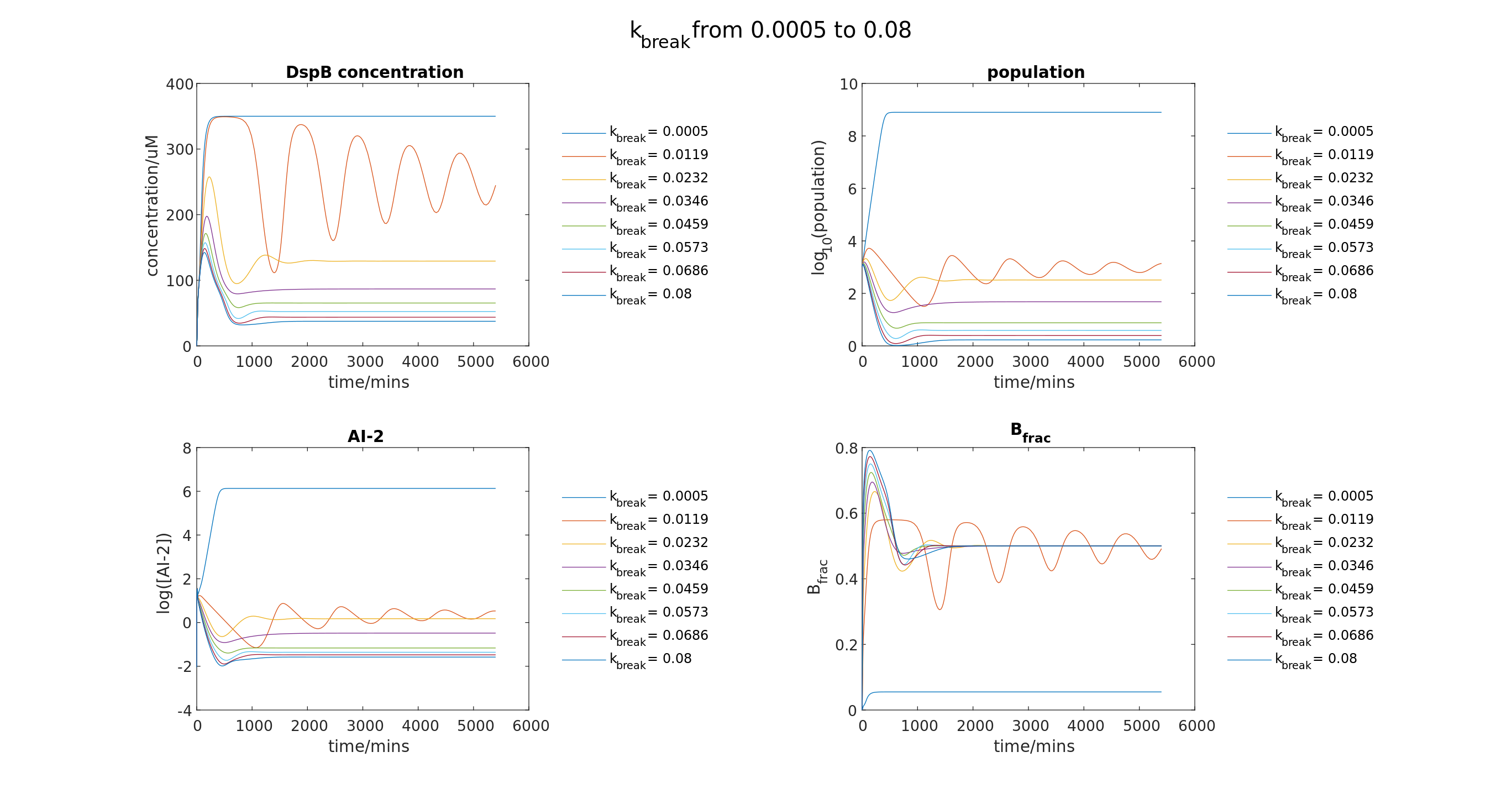 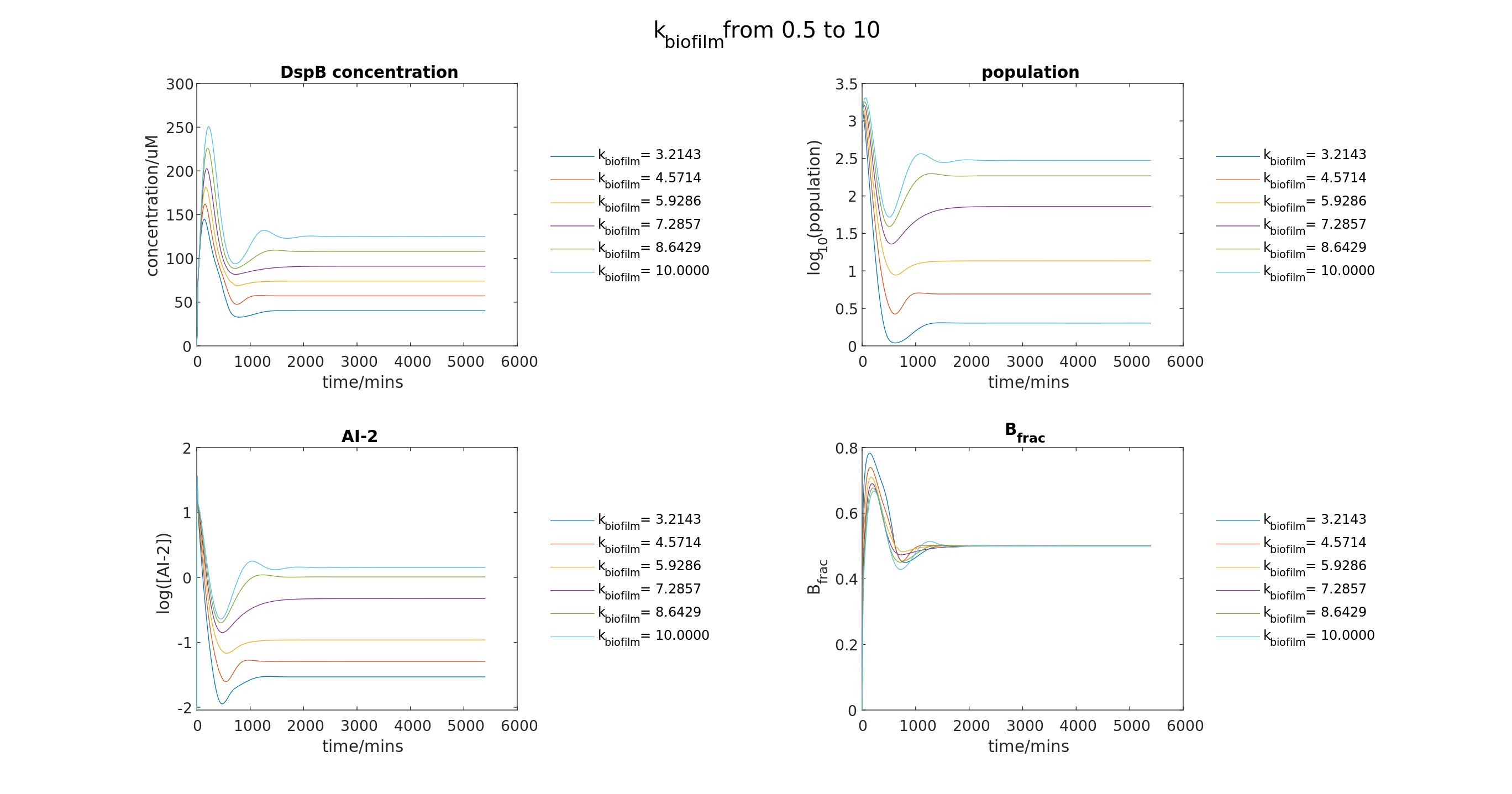 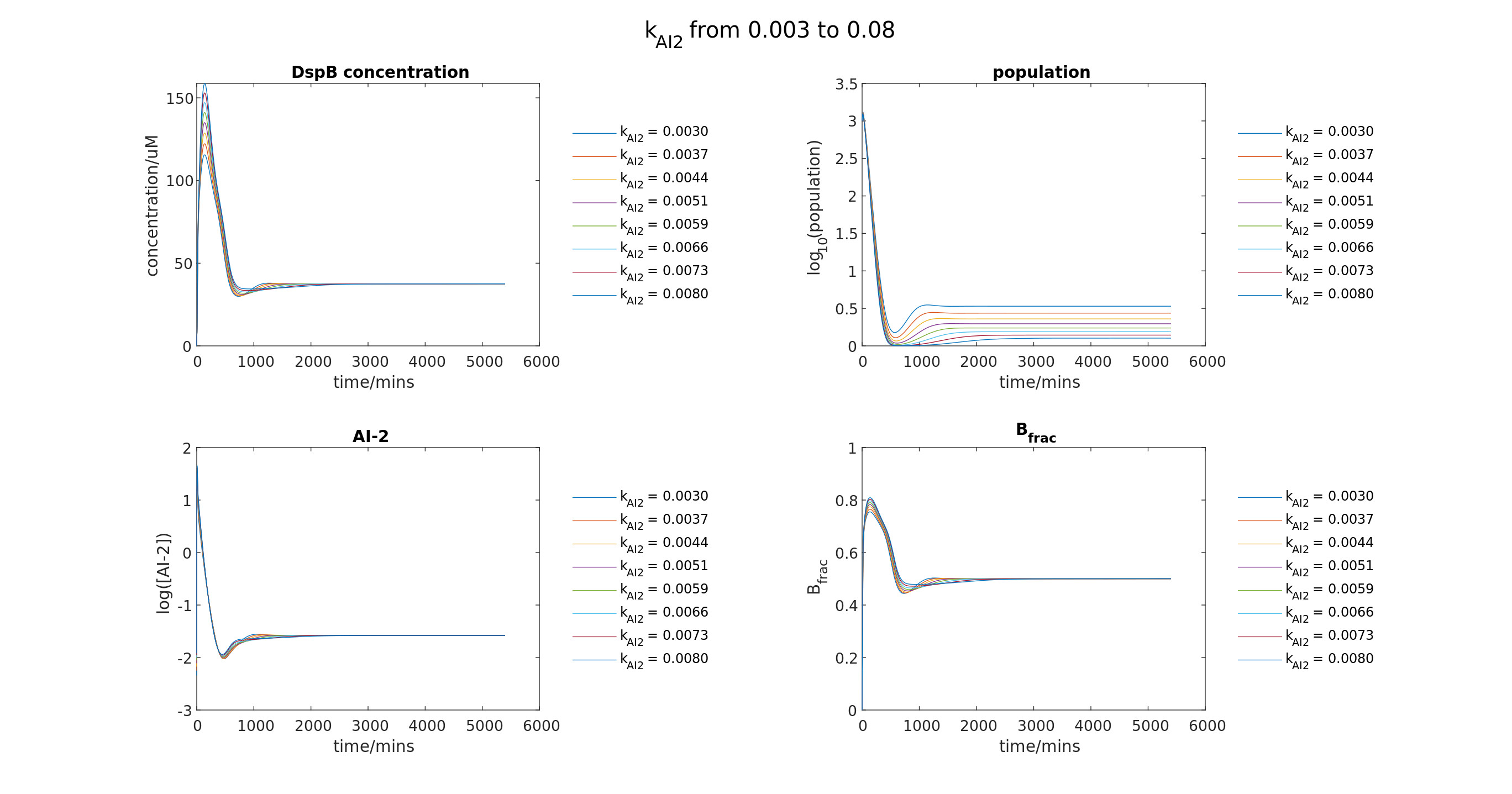 These results suggest that kbreak, kbiofilm and kdying all have a large effect on the bacterial population however kAI2 has little effect. To fully consolidate this model as a potential tool for future teams to use in designing their own antibiofilm mechanisms, these unknown parameters must be experimentally characterized. For a team to use this model in their project they can do this by adapting our model with a synthesis model of their own promoter, altering their bacterial growth parameters to suit their environment, altering the kbreak value to suit their antibiofilm molecule and integrating the rest of our equations into their adapted model.

Overall, we have produced a system of equations that has the potential to be used by future teams in the design statge of their project that could help determine the feasibility of chosen antibiofilm mechanisms. We would encourage other teams to build upon our work to further expand this model and it's uses.