We designed two types of constructs: for genetic modification and for parts characterizations. In order to enable S. elongatus to export intracellular sucrose that it accumulates under salt stress, the cscB, sucrose permease transporter has to be heterologously expressed. We planned to do this through a genome modification using a CRISPR-Cas12a plasmid for which we designed constructs. We also planned to characterize the strength of various promoters in S. elongatus and their effects on sucrose export capacity.

We also planned to characterize the activity of the native bidirectional promoter of the csc operon in E. coli.

All constructs and primers were made using Geneious Prime and Benchling. PCR primers were analyzed using the IDT Oligo Analyzer tool.


The S. elongatus constructs were designed to be integrated into the genome using the pSL2680 plasmid[1]. This plasmid expresses, cpf1 (also known as Cas12a) which is an RNA-guided endonuclease[2] under a lac promoter. It also has an endogenous Francisella novicida CRISPR array from a J23119 promoter[3]. The array has three repeat sequences with spacers between them, and the first repeat has been replaced by a lacZ site flanked by AarI restriction sites, which allows one to replace the lacZ with oligos that form the new targeting sequence of a crRNA in a CRISPR array. Cpf1 processes the array transcript into mature crRNA which can be used to target Cpf1 to a specific region in the genome based on the oligo sequence (which acts as the guide RNA or gRNA).

There are also restriction sites for KpnI and SalI downstream of the CRISPR array in which homologous repair templates can be inserted. Using this plasmid one can thus insert a sequence of interest in the genome using homology-directed repair. 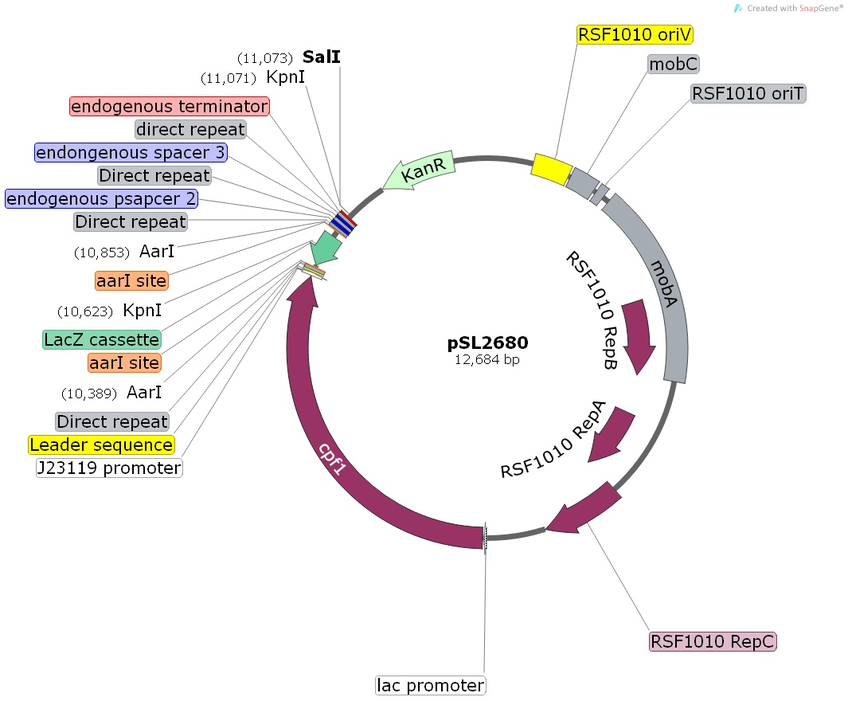 For the purpose of our project, all constructs were designed to integrate into neutral sites of S. elongatus. Neutral sites are loci in the genome with unknown functions that can be disrupted without affecting cellular viability or causing any distinct phenotypes[4]. We constructed homology repair templates for inserting sequences into either Neutral Site I or Neutral Site III of the S. elongatus genome. The gRNA targets Cpf1 to a 20bp region in the Neutral Site of the genome, where Cpf1 makes a double-stranded break with a 5' overhang. The homologous repair template flanked by 'homology arms' to the Neutral Site is then used by the cell for homology-directed repair, which integrates the homologous repair template into the genome.

For our project, we aimed to insert cscB (sucrose permease) into the genome, which is a symporter that transports sucrose and H+ across the membrane[5]. This will allow S.elongatus to export the sucrose it produces intracellularly in response to salt stress as an osmoprotectant[5].

In cyanobacterial cells, sucrose is synthesized from uridine diphosphate glucose (UDP-Glu) and fructose 6-phosphate (F6P) by sucrose-phosphate synthase (SPS) and sucrose-phosphate phosphatase (SPP) which has been shown to lead to a 2-fold enhancement in intracellular sucrose concentration in Synechocystis sp. PCC 6803[6] .

We also aimed to overexpress the native gene sps which encodes a fusion protein of the enzymes SPS and SPP.. Sucrose phosphate synthase (SPS) is an enzyme that catalyzes the rate-limiting conversion of uridine diphosphate glucose (UDP-Glu), and fructose 6-phosphate (F6P) into sucrose 6-phosphate (S6P)[6]. SPP catalyzes the final rate-limiting step in the sucrose-biosynthesis pathway[7]. 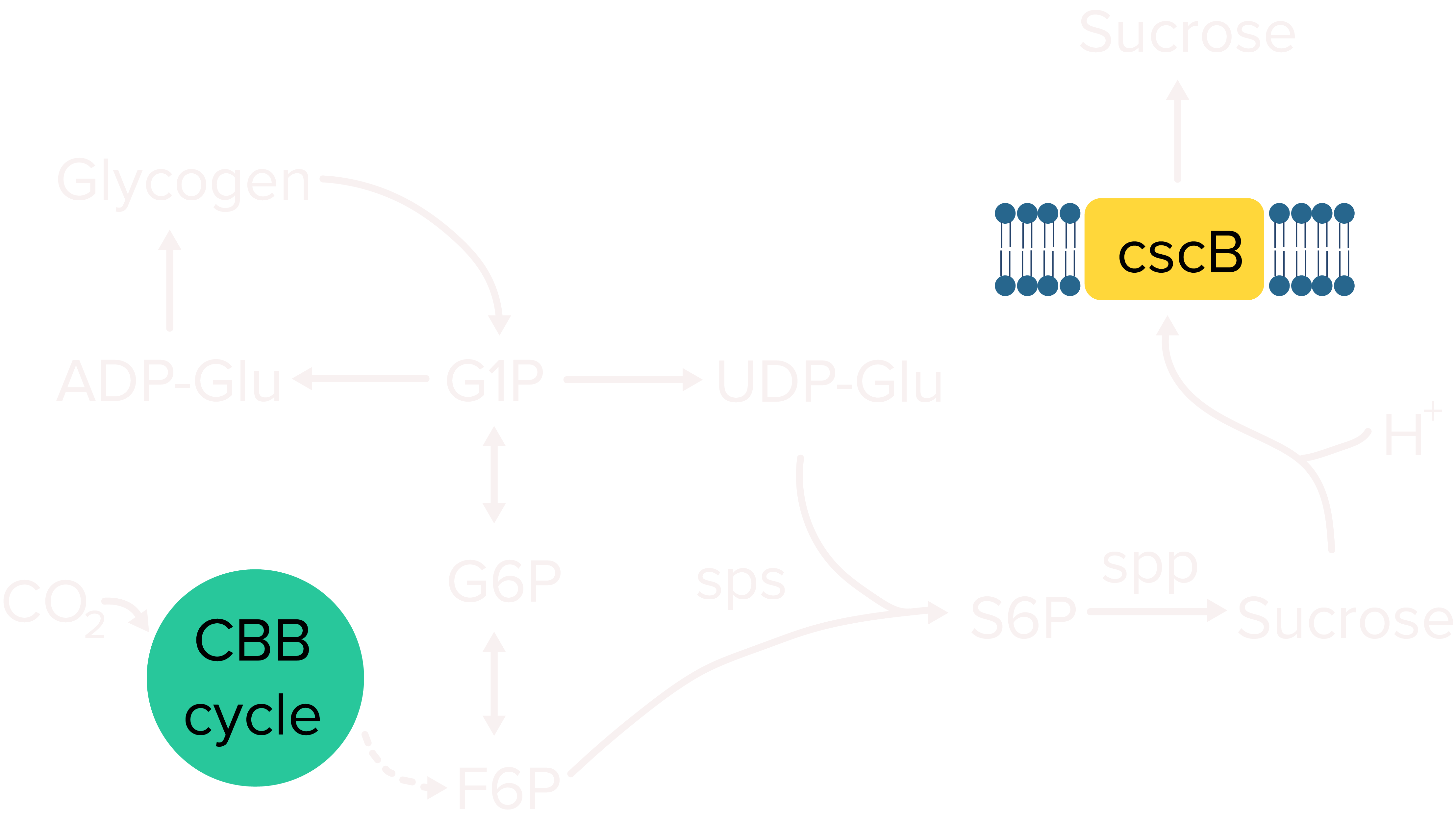