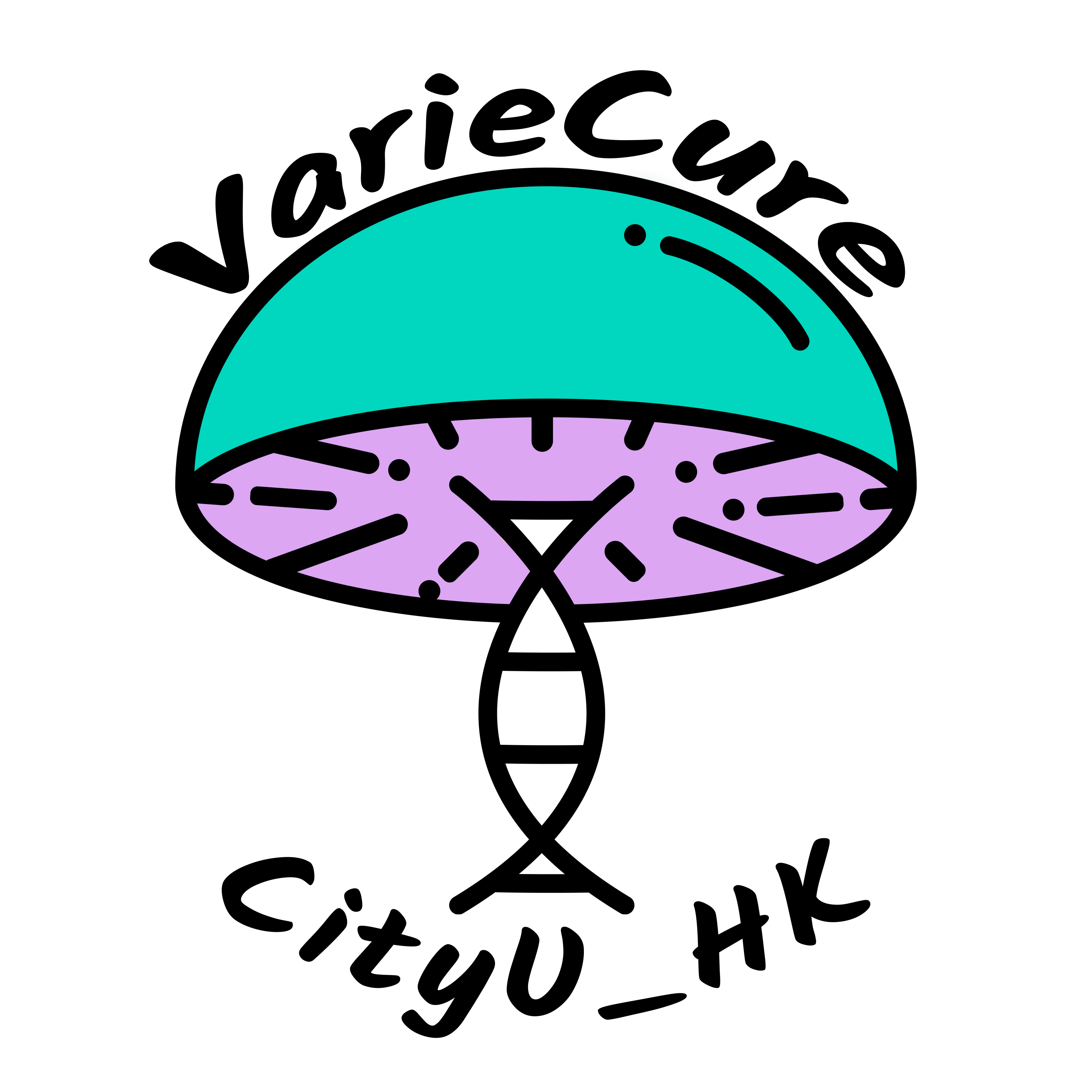 
Wet-lab experiments conducted by our CityU iGEM team have succeeded in isolating two previously reported natural products, variecolin and variecolactone, from a genetically-engineered Aspergillus oryzae fungus in the lab. Although previous studies have demonstrated the potential anticancer activity of these natural compounds, the anticancer mechanisms are not known. A detailed bioactivity screen requires extensive manpower and resources. In this computer modeling part of the project, we attempted to predict the likely mechanisms underlying the anticancer activity of variecolin and variecolactone by performing molecular docking and simulation study of these natural compounds with several important anticancer drug targets such as human placental aromatase (CYP19A1) (Geisler et al., 1998), topoisomerase II (Topo II) (Mokdsi & Harding, 2001), and cyclin-dependent protein kinase II (CDK-2) (Law et al., 2015).


The in silico analysis conducted in this study provided us with structural insights into the possible binding modes of the two drug-like compounds from this study (variecolin and variecolactone) against the molecular targets, Topo II and CDK-2 that were previously reported to play important roles in cancer pathogenesis. Importantly, the in silico data obtained in this study was corroborated by data from the anticancer bioassay experiments conducted in this iGEM project. This work helps to lay the ground work for future mechanistic studies on the anticancer properties of variecolin and variecolactone.

2.1 Analysis of drug-likeness and toxicity of natural products

The AutoDock Vina software was used to perform docking analysis of variecolin and variecolactone with three anticancer drug target receptor proteins (i.e., CYP19A1, Topo II, and CDK-2). The most favourable binding affinity was chosen based on the lowest free energy of binding (ΔG). The binding affinity (ΔG°) as a function of the binding constant (Kb) was expressed using the formula:


ΔG° represents the binding affinity of a natural product with the respective anticancer drug target protein.

3.1 Screening of drug-likeness of the natural products


The physiocochemical properties and drug-likeness of variecolin and variecolactone were analysed based on the Lipinski’s “rule of five” filters and toxicity parameters which is based on four criteria: molecular weight (MW) ≤500 dalton, number of hydrogen bond acceptors (HBAs) ≤10, number of hydrogen bond donors (HBDs) ≤5, and lipophilicity (logP) ≤5 (Lipinski et al., 2001). In addition, a compound that fulfills at least three of the criteria has a high absorption probability.


Variecolin has a MW of 368.3 dalton, contains two HBAs and no HBD, and has a lipophilicity (logP) score of 4.793. According to the Lipinski rule, variecolin fulfills all four criteria, and hence has a high probability of absorption.


Variecolactone has a MW of 384.3 dalton, contains three HBAs and one HBD, and has a lipophilicity (logP) score of 5.715. According to the Lipinski rule, variecolactone fulfills three criteria, and hence is predicted to have a high probability of absorption.


The toxicity of a drug-like compound is usually analysed first before assessment of its absorption, distribution, metabolism, and excretion (ADME) parameters is conducted. The toxicity of variecolin and variecolactone was analysed using the online ProTOX II software (Banerjee et al., 2018). The analysis predicted that variecolin belongs to toxicity class 6, which is regarded as non-toxic (LD50 >5000 mg/kg) while variecolactone was predicted to belong to toxicity class 4 with a predicted LD50 value of 1890 mg/kg. Both compounds were predicted to belong to the “non-lethal substances” category (Table 1)


Based on the ADME modelling data, variecolin and variecolactone were found to have a modulatory effect on CYP19A1. A structural comparison between variecolin and exemestane (an aromatase inhibitor used for breast cancer treatment) was then performed using online softwares in the DrugBank website (Wishart et al., 2006) and the results revealed that variecolin has a similarity score of 0.624 with the FDA-approved exemestane drug. Hence, CYP19A (from PDB ID:7s3s) was chosen as the target protein for molecular docking analysis with variecolin and variecolactone.


The protocol and parameters for molecular docking analysis were first validated by performing redocking of the co-crystallized exemestane molecule into the aromatase binding site. As shown in Figure 1, the docking protocol and parameters could reproduce the docking posture of exemestane which superimposes perfectly with CYP19A1 as observed from the crystalized structure, and is well supported by a small root-mean-square-deviation (RMSD) value of 0.281Å (an assessment of the stability of the system) between the co-crystallized exemestane and dock pose and the reproduction of all interactions within the binding site. This initial analysis confirms that the in silico protocol and parameters used are valid.


Interestingly, variecolactone in the docking analysis shows hydrogen bond interactions with the protoporphyrin IX co-factor in the aromatase enzyme, which is not observed in the exemestane-CYP19A1 complex. Without the co-factor, the enzyme would not be able to function. By interacting with the co-factor through strong hydrogen bonding, varicolactone may inhibit CYP19A1 aromatase via the protoporphyrin IX co-factor site.

3.4 Molecular docking analysis of variecolin and variecolactone with Topo II and CDK-2 proteins.


The binding affinities of variecolin and variecolactone to Topo II and CDK-2 are listed in Table 2. The co-crystalized ligands were redocked into their original receptor, and the binding affinities were obtained. The docked results show a low RMSD value when compared to the original crystal structures. The RMSD value for Topo II and CDK-2 were found to be 0.996Å and 1.277Å, respectively. The results showing values lower than 2Å indicate the postures of the ligands are similar to those in the crystal structures, and hence the computed binding affinity is expected to be accurate.


As shown in Table 2, the binding affinities of variecolin and variecolactone to the Topo II were -8 kcal/mol and -7.7 kcal/mol, respectively. Although they are lower than the values obtained from the co-crystalized ligand, they still indicate favourable binding.


Figures 3-6 show the interactions between the CDK-2 and Topo II proteins with variecolin and variecolactone. From the Figures, similar interacting residues were observed within the same receptor. Since the co-crystalized ligands are known enzyme inhibitors, this observation indicates that both variecolin and variecolactone could bind to the enzyme in a similar mode as compared to previously reported inhibitors.


The favourable binding affinities and similar interacting amino acid residues could provide us with a rational prediction that it has a chance for variecolin and variecolactone to exhibit similar biological activity, such as cytotoxicity, with those enzyme inhibitors. However, detailed in vitro and in vivo examinations should subsequently be conducted to confirm the inhibitory effect.

Figure 1. Optimal binding mode of exemestane (aromatase inhibitor) with CYP19A (human aromatase enzyme) (PDB ID: 3S7S). The molecule in orange color represents the co-crystallized molecule present in the crystal structure, while the one in green colour is the docked molecule. The superimposed structure indicates that the in silico molecular docking protocol could reliably predict the predominant binding mode of a ligand (exemestane) with the target protein (CYP19A1) of known 3-D structure. 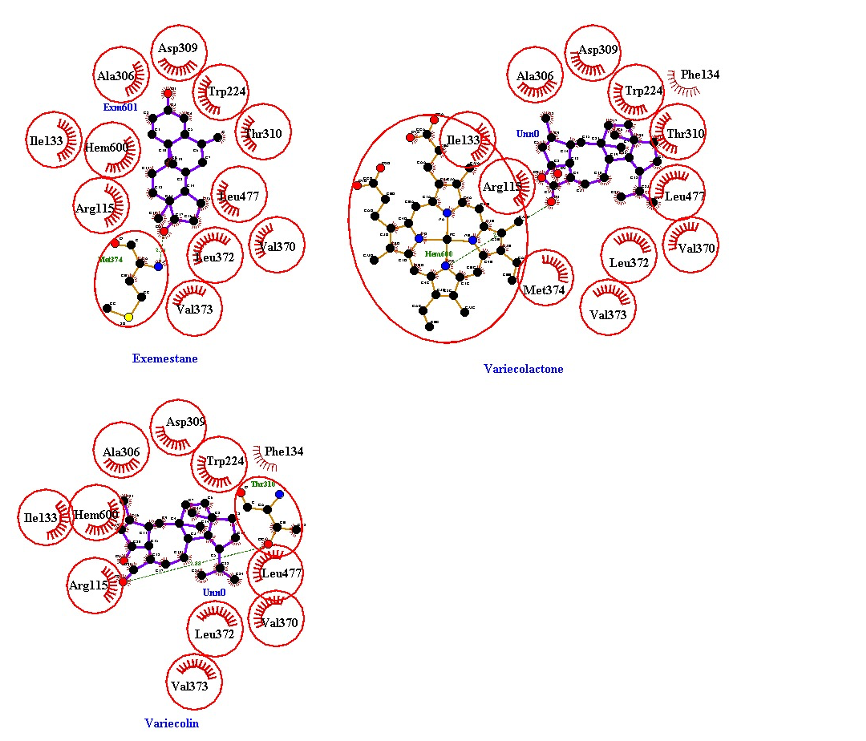 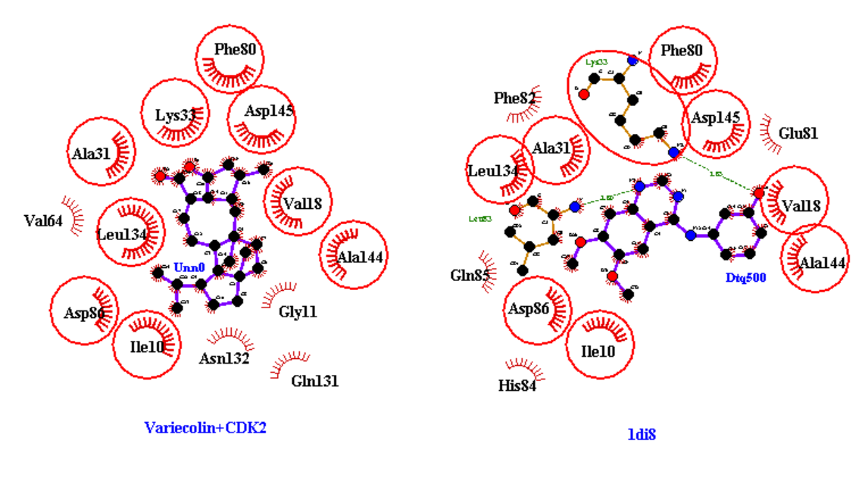 Figure 3. LigPlot+ diagram of an optimally docked variecolin-CDK-2 complex. Nine out of thirteen amino acid residues are matched between variecolin and the co-crystalized CDK-2 ligand. Given that the predicted binding affinities between them are relatively close (-7.5 kcal/mol and -8.5 kcal/mol), there is a good chance that variecolin may react in a similar manner with the co-crystalized ligand under wet-lab conditions. 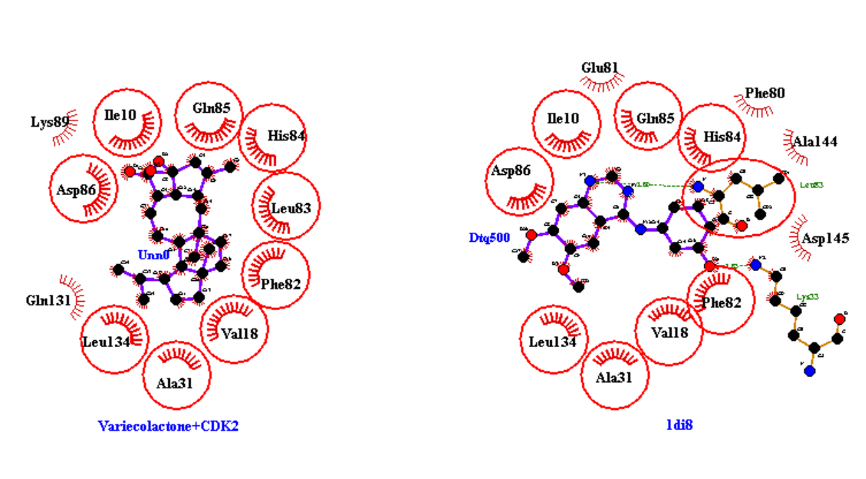 Figure 4. LigPlot+ diagram of an optimally docked variecolactone-CDK-2 complex. Nine out of thirteen amino acid residues are matched between variecolactone and the co-crystalized CDK-2 ligand. A -6.6 kcal/mol binding affinity was observed, showing that variecolactone could bind to the inhibitory site of the enzyme with good affinity.

Figure 5. LigPlot+ diagram of an optimally docked variecolin-Topo II complex. The conserved interacting amino acid residues and a -8 kcal/mol binding affinity show that the variecolin molecule could fit into the same cavity as the known topoisomerase inhibitor and bind to it strongly. A hydrogen bond interaction was observed in the serine residue at position 149. As hydrogen bonds often contribute significantly to the enzymatic reaction, variecolin is expected to exert a similar effect on Topo II. 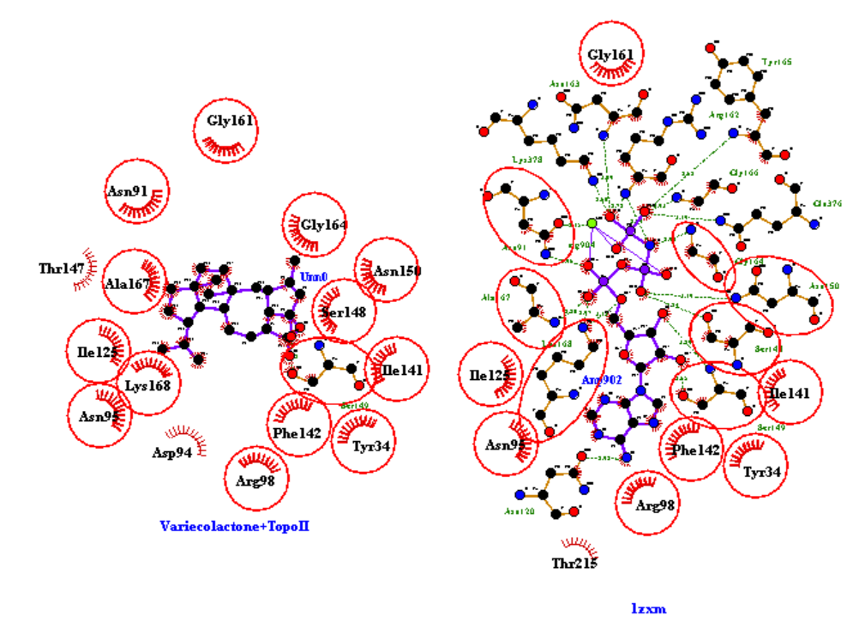 Figure 6. LigPlot+ diagram of an optimally docked variecolactone-Topo II complex. The conserved interacting amino acid residues and a -7.5 kcal/mol binding affinity show that the variecolactone molecule could fit into the same cavity as the known topoisomerase inhibitor and bind to it strongly. The same Ser149 hydrogen bond interaction was also observed in variecolactone. 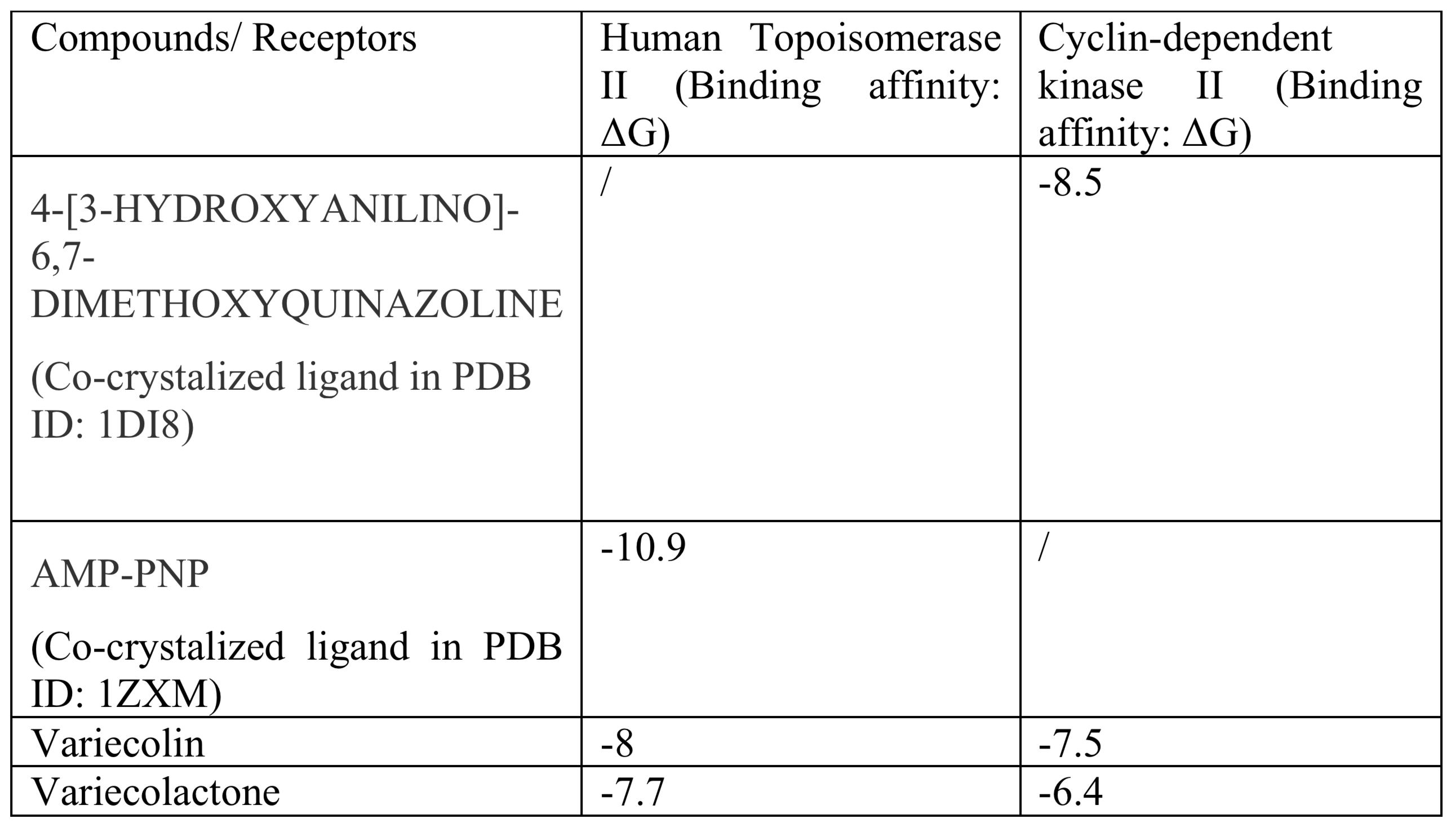