We used existing methods of transforming bacterial cells with a given plasmid in order to confer bacteria with the ability to grow on a carbon source atypical of that species. In order to later assess whether or not both the transformation and the plasmid design itself were successful, we ran control experiments that verified the lack of certain sugar dehydrogenase pathways in E. Coli or P. Putida. For these experiments and all experiments moving forward, the carbon sources used in our analyses were glucose, sucrose, ribitol, and D-arabitol. Given these initial experiments, we moved forward with isolating the individual pathways that allowed our bacteria to grow on their carbon source of choice and purified these parts.

Isolation and purification of these pathways allowed us to then amplify the corresponding parts such that we could combine them into a plasmid of our design. Using Gibson HiFi assembly enzymes, these plasmids were generated before being transformed into the appropriate bacteria via heat shock methods. Following this, sequencing was used in order to determine whether or not our design had been properly incorporated into the bacteria’s plasmid.

Once the cells were verified to have been successfully transformed, we moved forward in our experiment to assess the bacteria’s responses to plasmid uptake in terms of whether or not the necessary enzymes would be produced. In order to do so, we cultured the various transformed bacteria on those carbon sources on which they were not initially able to grow to determine the extent to which the plasmid conferred to these bacteria the ability to produce previously not present sugar dehydrogenase proteins. To test these newfound characteristics, time of transformation, the concentration of the respective inducers, and concentration of sugar in the media were varied and the results were observed.

Over the course of the experiment we were successfully able to: 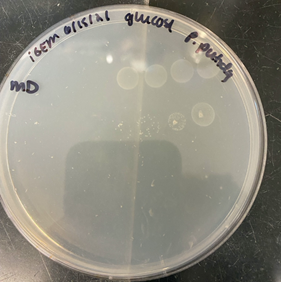 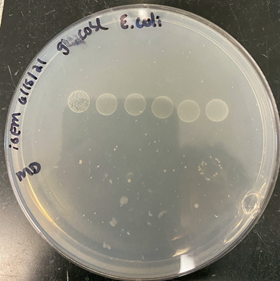 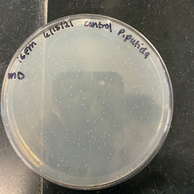 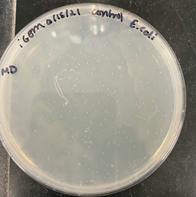 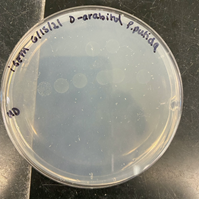 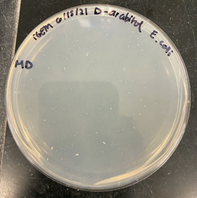 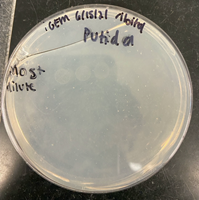 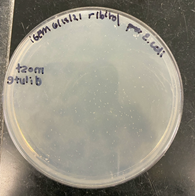 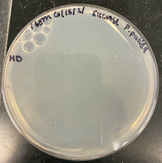 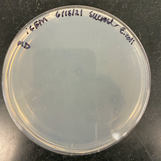 Figure 11 - Table establishes colony counts for baseline growth on control and on each type of provided sugar. Note: Although colony counts might be similar between glucose and other three experimental carbon sources, colony morphology is much clearer in glucose than the minute pinpoints observed with other sugars. 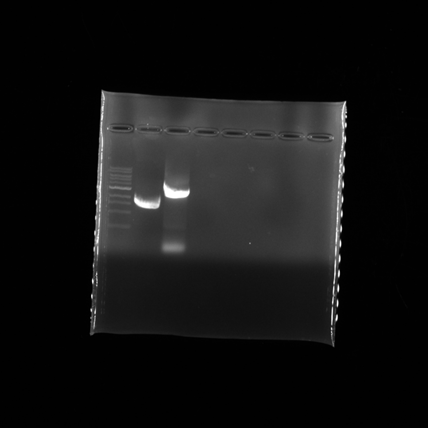 Figure 12 - Electrophoresis gel depicting verification of ribitol part of pFLtRi5 plasmid. The first band (first from left) is a ladder dye used to delineate size of parts in 0.5kb increments. The second band (second from left) was segmented using a forward primer in front of the respective regulator part (Ltet02) and reverse primer internal to ribitol part at 1.5kb. The third band (third from left) depicts the entire ribitol metabolic pathway as amplified through PCR at 2.5kb. 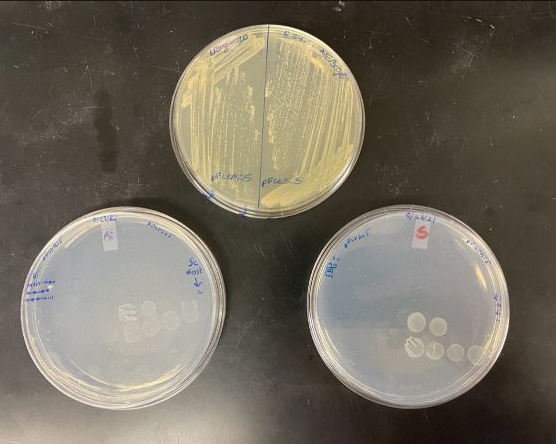 Figure 13 - Example of contamination often encountered over the course of experimentation. Spotted dilutions of various plasmids on their respective sugars demonstrated highly dense growth among the supposedly least concentrated spots (bottom right of both plates at bottom of image). When each contamination site was struck onto plates, colony morphology was similar and not that of expected E. Coli (plate at top/middle of image). 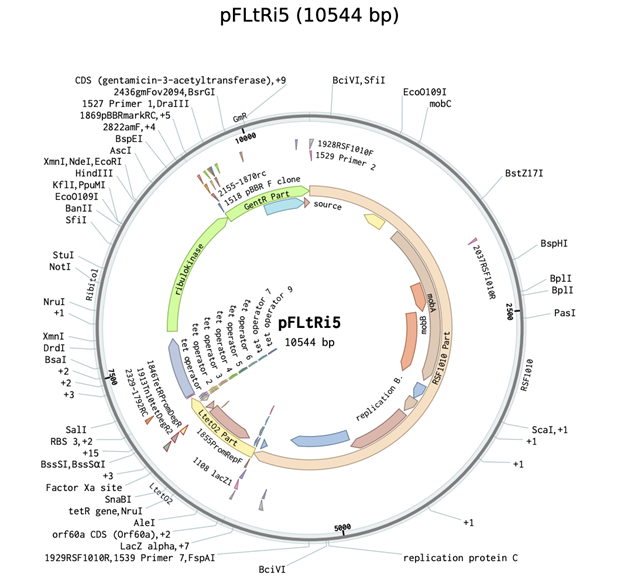 Prior to optimizing transformation efficiency, it was necessary to establish solely transformed cells’ utilization of respective sugars to colonize. Initial experimentation appeared promising as transformed growth occurred; however, its inconsistency even among sugars proved it ultimately inconclusive. In an effort to establish that introduction of our plasmid allowed for selective growth, we attempted to control for numerous factors that might have confounded our results.

There were several factors we considered that might have potentially inhibited the success of our sugar selection. The first of these cases was the phase of the parent colony. Initially, whenever we subcultured from the parent colony which we had already found and proven to have successfully taken up our sugar plasmid, we would subculture and immediately add the respective inducer for either the Ltet or Cin regulator and begin an experiment. We hypothesized the issue with this being that the parent colony, having already grown, existed in a stationary growth phase where minimal further colony growth may be observed and biochemical processes are stabilized to that required for continued survival. Given a new metabolic enzyme to produce may have either been downregulated due to the importance of other factors necessary towards survival and thus enzyme production occurring at a very slow rate or rather not enough necessary cellular machinery already present to produce the enzyme due to high levels during growth being depleted. To address this issue, we performed an experiment in which we took two subcultures from the same parent colony. One subculture, our control, was immediately treated with the appropriate inducer; the other subculture was again quickly subcultured to obtain a colony in exponential phase which was only then treated with the respective inducer. While the stationary phase may have inhibited enzyme production, we hypothesized that the addition of an inducer during an exponential phase of growth would allow for a greater availability of cellular resources and machinery to be dedicated towards enzymatic production. Moreover, the exponential phase subculture had more time to produce the desired sugar enzymes.

Rather than the phase of growth when conducting an experiment, another variable we sought to regulate was whether the concentration of the respective inducer influenced the amount of enzyme produced. There are two important implications regarding the effect of the inducer unto the regulator. With too little induced production of the enzyme, the cell may not be able to produce enough of the enzyme to metabolize the respective sugar and thus will die. However, too much of the enzyme produced might draw cellular resources and machinery otherwise vital to growth and survival, likewise leading to cellular death. In order to account for both these possibilities, we conducted an experiment varying our inducer concentration from that we regularly used to those both lower and higher amounts. No colonies grew on the respective sugar regardless of inducer concentration.

With neither the growth phase nor inducer concentration ultimately being the cause for why our transformed plasmids were yet unable to consistently grow on their respective sugars, we next turned towards the concentration of the sugars. Because cells would only be able to survive if able to produce enough of the respective enzymes to metabolize the provided sugar, the concentration present could have impacted cell survival. Too little sugar might yield not enough of an energy source to power other integral cellular activity and likewise limit growth potential whilst ample sugar should theoretically allow for much greater growth potential than what had been observed with the concentration provided through previous experiments. In order to test the significance of sugar concentration on our transformed cells’ survival, we set up a liquid culture experiment. To test the effect of sugar concentration, a single one of our plasmids were considered at a time. Within liquid media, five various sugar concentrations were suspended and then inoculated with a subculture. One set of five liquid cultures contained transformed cells that retained the appropriate enzyme for the suspended sugar as the other set of five liquid cultures were inoculated with transformed cells retaining a different plasmid for another sugar not present. As such, we were able to use our successfully transformed cells to evaluate survivability. Ultimately, however, equivalent growth was observed in both the positive and negative controls at lower sugar concentrations and cell debris in both the positive and negative at higher concentrations. A potential cause of this unexpected result at higher sugar concentrations could have been that cellular resources were exhausted in producing the desired enzyme in the presence of greater energy supply that other necessary cell functions were inhibited or downregulated per the result of the present enzymatic activity.

An important factor was discovered later in our lab work that resulted in our needing to repeat experiments to retain validity in our results. When exploring potential factors that might be causing our transformed cells to not display expected select growth, we discovered the supplementary strain of E. Coli used was an auxotroph. As a result of the strain utilized having been engineered to better be able to take up and retain genetic material, certain experimentally designed strains are known to necessitate something not needed in the wild type. In our case, we discovered that it was necessary to supplement amino acid Leucine in experimental design in order for the cell to perform a variety of vital functions. This alteration in design was incorporated into all subsequent experiments in addition to asserting prior experimental results.

Finally, as growth phase, inducer influence, and sugar concentration were proven to not be primarily responsible for the lack of expected select growth, we decided to further verify enzymatic production. With evidence supporting the accuracy of our new engineered genetic part and inability to observe the expected growth of transformed cells, we instead looked to any potential issue in the process of enzyme production itself. We were able to assess the production of the desired enzymes coded for by our plasmids through an assay analysis. In opting to evaluate the presence of coded-for dehydrogenase enzymes, we were able to take advantage of the NAD/NADH cofactor system commonly present in a variety of metabolic systems through various lineages. By lysing varying amounts of our transformed cells and immediately screening for a change in ratio of NAD:NADH present over time, we were able to evaluate for the expected trend of greater transformed cellular lysate equating to greater changes of the NAD:NADH ratio in the observed time interval. Nevertheless, we found that compared to a control in which no cell lysate and thus no dehydrogenase enzyme present to hasten the NAD:NADH conversion, the observed varying concentration did not prove any conclusive association that evidenced greater dehydrogenase present in lysate resulting in greater changes in the cofactor over time.

Although we were unable to demonstrate sugar introduction as an alternative selectable marker, we were able to successfully engineer and introduce a novel plasmid with the code for transferable sugar-metabolizing pathways to Pseudomonas.putida and Escherichia.coli. Numerous complications exist in the manifestation of full transference of a metabolic pathway. Many metabolites serve as complex intermediates within several systemic pathways that play integral roles in cell function. Introducing mechanisms to metabolize new substances likely incur innumerable opportunities to confound a natural pathway integral to the survival of a cell. Even with fully analyzing the biochemical interactions responsible for metagenomic-derived processes, there are always more details to be yet discovered to truly uncover why our system was unable to materialize. Moreover, there additionally could have been complications arising from the aspect of synthetic biology. As we commonly used transformed cells of one sugar as the positive control in an experiment meant to test another sugar, it may be that the respective inducer added to stimulate the included regulator might have potential crossover with common promoters among the other control. Finally, an exhaustion of cellular resources necessary to construct the coded enzymes may have had compounding effects on those available for other cell functions as well. Further testing is needed to establish a basis of consistency in expected selection prior to systemic optimization and judging efficacy as a potential replacement for alternative selectable markers to traditional antibiotics; however, we considered numerous variables integral to and were able to successfully produce the genetic parts to enable the eventual creation of such a system.

Team UFLORIDA understands the importance of collaboration and building upon previous work. We hope our project can provide the educational means to inspire and help future teams continue the synthetic biology aspects in alternative selection markers. We were able to work on the wet lab aspect of this project through the summer. We understand that science takes time and with this opportunity, we have provided a list of controls and additional work we think future teams should consider for further applications: