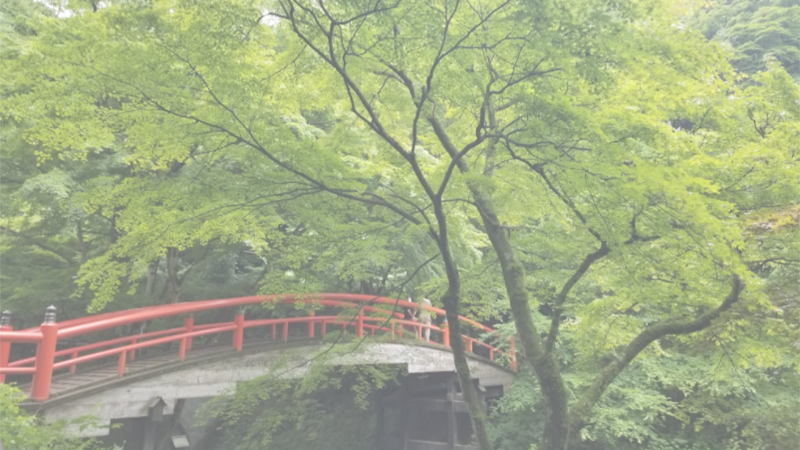 Hot spring facilities all over the world have various problems caused by biofilms. For example, biofilms protect infectious microorganisms from disinfectants. Biofilms are communities of microorganisms that irreversibly stick to non-biological surfaces and grow on the surfaces, producing exopolysaccharides that facilitate attachment and matrix formation. To break down such biofilms, we constructed a vector for the expression of a glycolytic enzyme fused to RFP (red) that degrades exopolysaccharides. An Escherichia.coli strain was used not only as an expression host but also as a carrier of the enzyme to biofilms. The strain also contained a suicide vector as the second vector that can cause bacteriolysis under some specific condition. Our findings showed that experimental biofilms were efficiently degraded by the glycolytic enzyme that leaked from the lysed transformant cells. The use of the red transformant may make it easier to kill infectious microorganisms with disinfectants or remove biofilms from bathtubs. 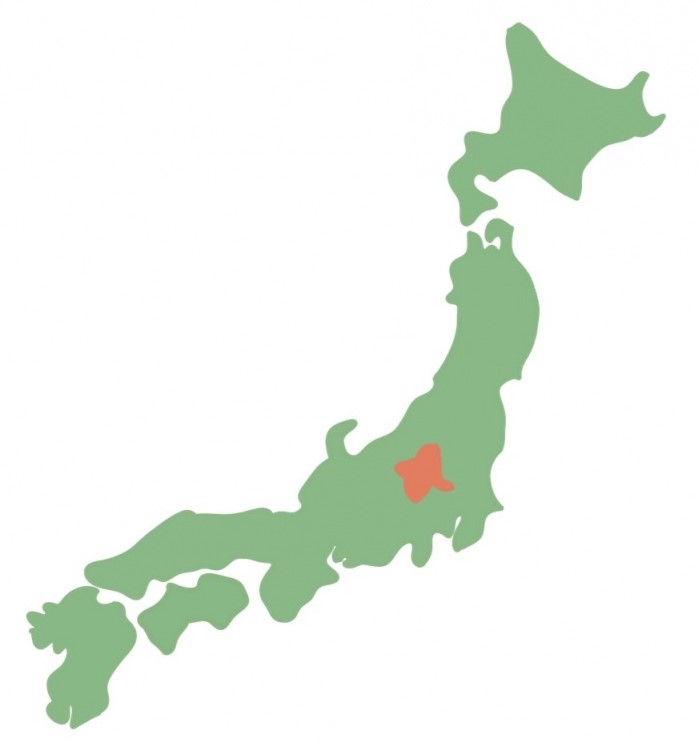 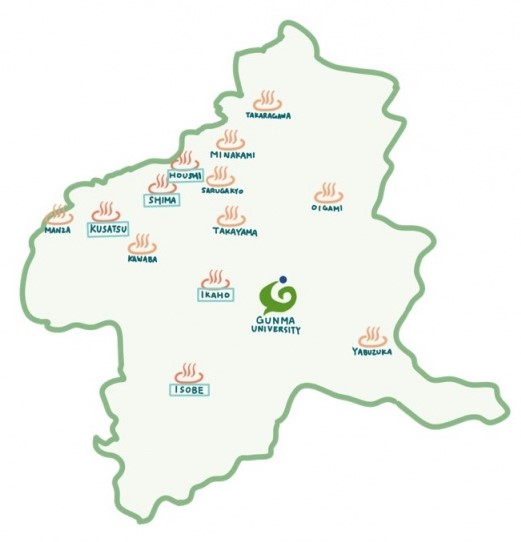 Gunma iGEM started in 2020 with an aim of social and regional contribution activities through synthetic biology. Gunma Prefecture, located in the center of the main island of Japan, is famous for its hot springs, also known as “Onsen” in Japanese. In western countries, hot springs are often used for medical treatments, while, in Japan, onsen is not only a relaxing tourist destination but also a major tourism resource for Japan. There are about 27,000 onsens in Japan, many of which have onsen facilities. Around 130 million guests visit onsen facilities annually all over Japan [1]. When asked about the purpose of travel, around 70 % of the total lodgers visiting Gunma in a year answered: “spending quality at onsen” [2].

Onsen facilities often suffer from biological contamination issues arising from microorganisms, including pathogens. These issues are a threat to public health and an economic burden for the facilities. Particularly, microbial contamination in bathwater circulators would easily cause severe health problems unless something special is done. For example, Legionella is the causative agent of Legionellosis. Springs are a major source of outbreaks of this disease, which is annually reported not only in Japan but also in many other countries. Thus, it is quite important to completely kill microorganisms that cause infectious diseases such as Legionellosis (refer to “Words” section below).

However, microorganisms usually live collectively on surfaces of bathtubs and drainage pipes, and cannot be easily killed by household cleaners. The reason is that they are coated and protected by biofilms, which act as a protective barrier against many disinfectants (refer to “Words” section below). Biofilms are communities of microorganisms that irreversibly stick to non-biological surfaces and grow on the surface, producing extracellular polymeric substancess that facilitate attachment and matrix formation. In onsen facilities, special cleaners or disinfectants are used to kill the microorganisms, but the biofilm formation often makes it difficult for disinfectants to invade the cells. Consequently, it is beneficial to destroy biofilm in view of the enhancement of the effects of disinfectants.

Purpose of our project

What we hope to accomplish during the 2021 iGEM competition

In the iGEM Competition, we try to break down biofilms with the power of synthetic biology. Our goal is to construct a "Bio-carrier with a Biofilm Breaker Enzyme", an Escherichia.coli strain that produces, carries, and releases enzymes that inhibits and/or destroy biofilm so that the efficacy of disinfectants will be increased.

In biofilms, microorganisms are embedded in a matrix of extracellular polymeric substances, which mainly consist of exopolysaccharides, nucleic acids, proteins, and lipids. Our plan is to degrade exopolysaccharides with a glycolytic enzyme that is expressed in E.coli using an expression vector so that biofilms can be friable and susceptible to disinfectants. The point is that E.coli is used not only as an expression host but also as a carrier of the enzyme to biofilms. When the E.coli cells are attached to biofilms, cell lysis will be induced using a suicide vector that is contained as the second vector, releasing the glycolytic enzyme. Consequently, the enzyme will directly attack exopolysaccharides in biofilms. Moreover, we try to express a glycolytic enzyme from an extremely thermophilic bacterium, which is quite applicable to hot water.

Our team hopes to accomplish a series of experiments, although a selected glycolytic enzyme may not be the best for deconstruction efficiencies.

How and why we chose the iGEM project

Our theme is “Break down Biofilms in Baths”. This was inspired by the fact that Gunma Prefecture we are living in is a hot spring powerhouse. Gunma has a number of hot springs or onsen facilities, which are always at risk of outbreaks. We were sometimes told about local outbreaks of the infection in some onsen facilities in Gunma. Thus, we all wanted to help solve this severe problem with the power of synthetic biology. Additionally, since large amounts of disinfectants are used in the facilities in Gunma, we also wanted to contribute to cutting down on the use of disinfectants not only from the viewpoint of cost reduction but also environmental protection.

Work outside or inside of iGEM that inspired our project

Half of the members are 2nd-year medical students. In a class, it was said that biofilm is actually quite familiar to all of us, and, for example, the white plaque on our teeth one brushes every day is biofilm. Besides, about 80 % of chronic and recurrent microbial infections in the human body were reported to be due to bacterial biofilm. This information inspired us to study the inhibition of biofilm formation [3].

How we will achieve our goals

Our goal is to break down biofilms that occur in the real world. One of the biofilms may include Legionella. We are planning to produce laboratory model biofilm that is similar as possible to those in the real world in the range of the P2 level experiments. Additionally, we plan to make a model of a bath with bathwater circulators in the future. Finally, we will examine if disinfectants are more effective in the bath model after treatments with the “Bio-carrier with a Biofilm Breaker Enzyme”.

Our project is a useful application to synthetic biology

Our project provides an E.coli strain with the ability to produce a glycolic enzyme infused with RFP and release the enzyme whenever you like. The E.coli strain is used as a carrier to biofilms by taking advantage of microbial adherence to biofilms. We think that the creation of this strain is a good example of a useful application to synthetic biology.

Items of the experiments in this project

A series of experiments are described in two parts: “Engineering Success” in the SILVER section and “Proof of Concept” in the GOLD section.

The second step aimed to determine which enzymes inhibit biofilm formation in our laboratory biofilm model, we tested a series of enzymes that target the biofilm matrix. In our preliminary experiment, we used commercial products of α-galactosidase, β-glucosidase, DNase I and Proteinase K. We hypothesized that α-Galactosidase and β-Glucosidase would degrade a subset of exopolysaccharides while DNase I and Proteinase K degrade extracellular DNA and extracellular proteins, respectively.

In this step, we estimated the efficacy of the α-galactosidase recombinant enzyme derived from E. coli to inhibition of biofilm formation.

Following step 3, we tested whether the recombinant enzyme degrades the “matured” biofilm in addition to biofilm formation.

For a study heading for application of our tools to biofilm degradation, we constructed a biofilm-degradation system using a “Bio-carrier with a Biofilm Breaker Enzyme”. It is an E.coli strain that produces SacB along with α-galactosidase. We expected that α-galactosidase recombinant enzyme can be released when this strain is lysed by sucrose addition, then degrades biofilm.

Environmental bacteria and soil bacteria can cause unsanitary stains and slime in the bathtub. It also leads to clogging of pipes and filters required for circulation and drainage. Since many onsens have open-air baths, it is a challenge to completely prevent biological contamination of such bacteria.

Pathogens pose a serious threat to the health of users and a burden to the business since it results in the temporary closure of the facility. An example of pathogenic contamination in onsen is Legionella pneumophila. This can cause serious pneumonia through inhalation of contaminated aerosol. According to the National Institute of Infectious Diseases, cases are reported all year round in Japan, and the highest reported cases correlate with the vacation seasons and hot spring visitations [4].

Although all facilities make tremendous efforts to prevent contamination using chlorine-based disinfectants, the challenge to remove all pathogens remains.

Biofilm is actually quite familiar to all of us. The slimes on rocks, washing machines, shower pipes and white plaque on our teeth are all biofilms. Biofilm is composed of cells and extracellular polymeric substance (EPS) (also called “biofilm matrix”). EPS enables microorganisms to make the three-dimensional biofilm structure. EPS accounts for 50 % to 90 % of the total organic carbon of biofilms. EPS includes polysaccharides (1-2 %), proteins (< 1-2 %), DNA (< 1 %), and RNA (< 1 %) and water (97 %) which allows the distribution of nutrients within a biofilm matrix [6].