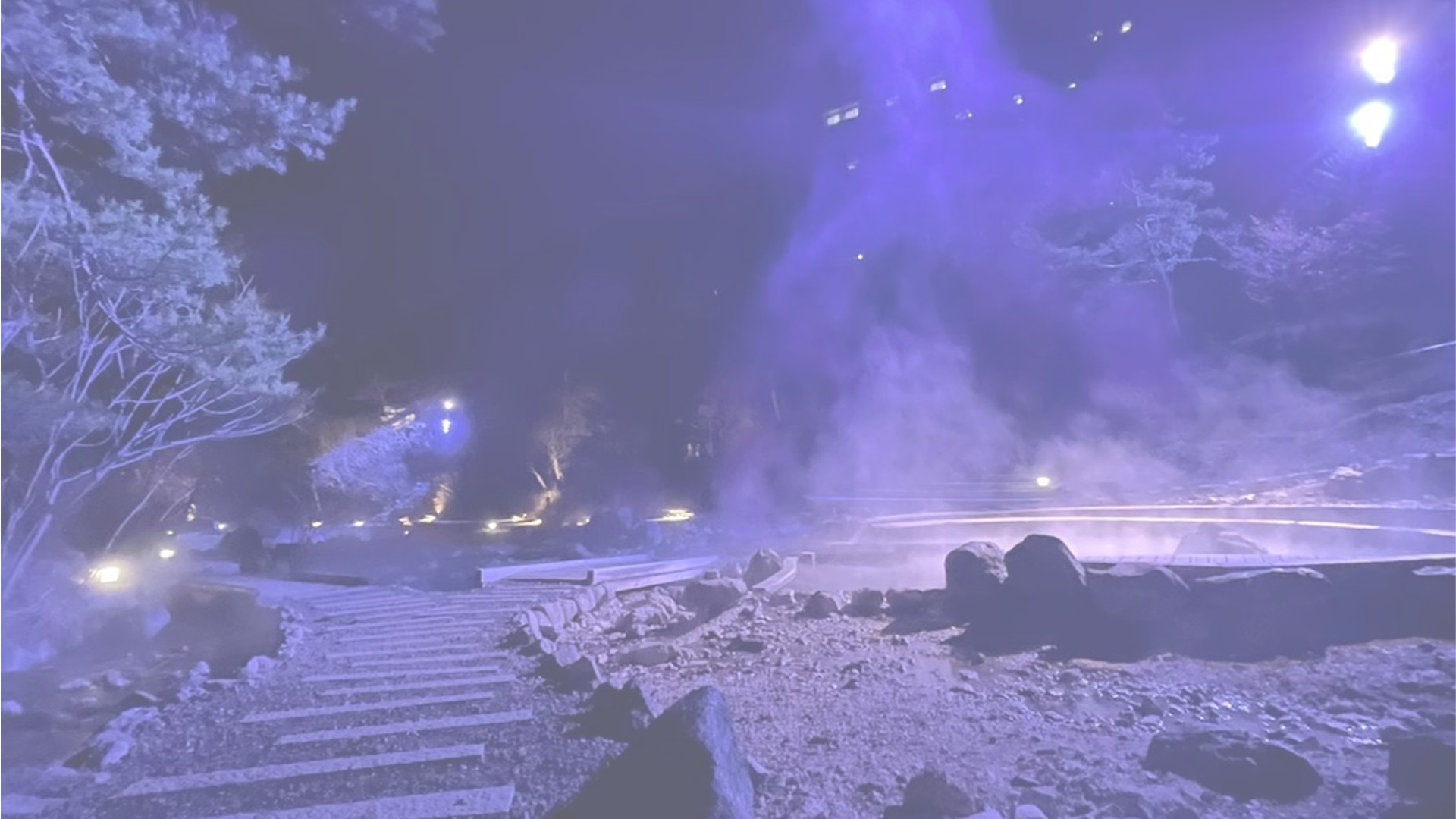 What is important and necessary for degradation of biofilms observed in bathtub surfaces and pipes in hot spring facilities?

In this project, we focused on the three points:

Accordingly, this section is composed of three parts.

Hot spring facilities all over the word have various problems caused by biofilms. One of the major problems in the facilities is that biofilms protect infectious microorganisms from disinfectants and antimicrobials. Biofilms are communities of microorganisms that irreversibly stick to non-biological surfaces and grow on the surfaces, produce extracellular polymers (mostly of exopolysaccharides). What is more important is that exopolysaccharides facilitate attachment and matrix formation of biofilms We think that degradation of exopolysaccharides on biofilms by a glycolytic enzyme would damages robust biform formation, and thus disinfectants kill microorganisms efficiently.

To determine which enzyme is more effective for degradation, we performed experiments of biofilm degradation (as described in detail in "Proof of Concept" of the "Gold" section) using five enzymes that were purchased from Sigma-Aldrich and Nacalai Tesque.

The findings showed that the degradation efficiency in descending order is as follows: 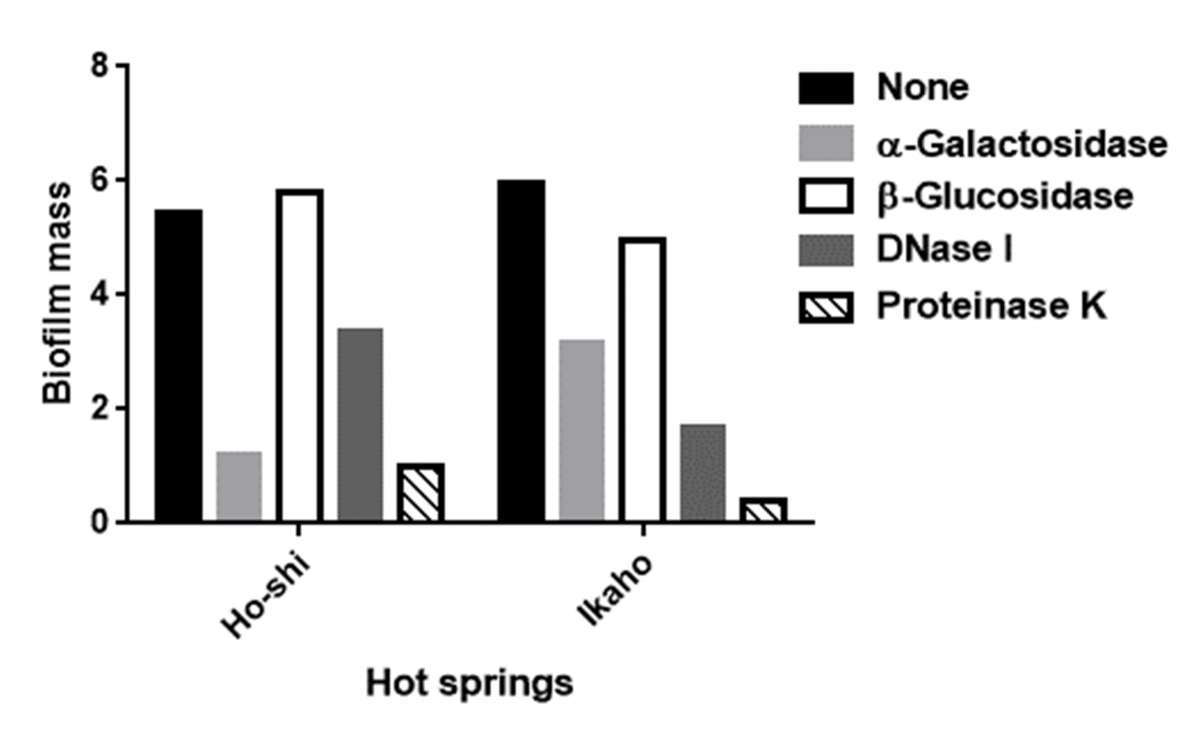 The DNA encoding the gene of α-galactosidase was amplified by PCR from E.coli genomic DNA. This DNA fragment was cloned into the expression vector pSB1C3 using an In-Fusion cloning kit (Takara). This plasmid was transformed into E.coli DH5α or BL21(DE3). 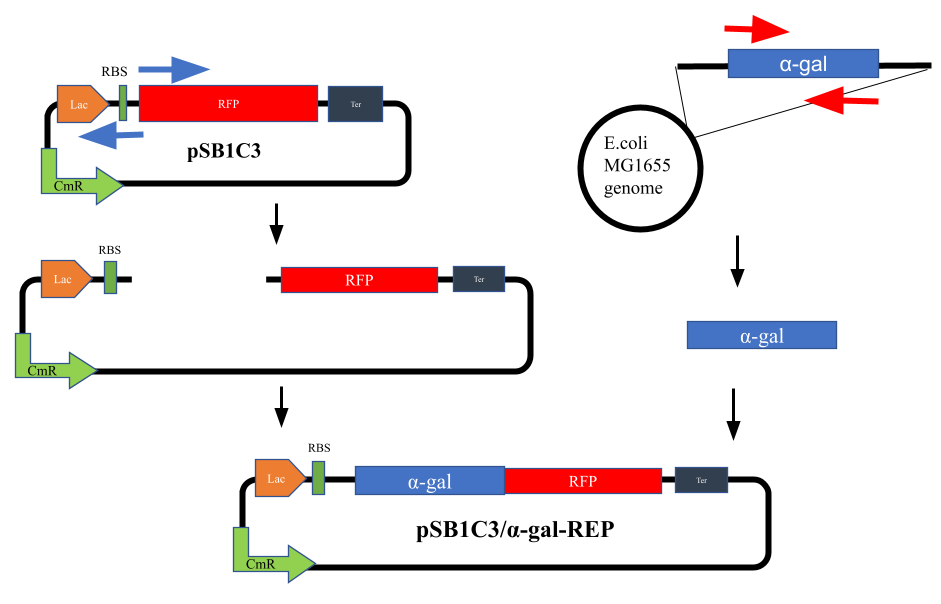 RFP overexpressed in E.coli made the cultures light up in red. The E.coli cells were visualized using a fluorescence microscope (×100 magnification), showing that the cells were red. 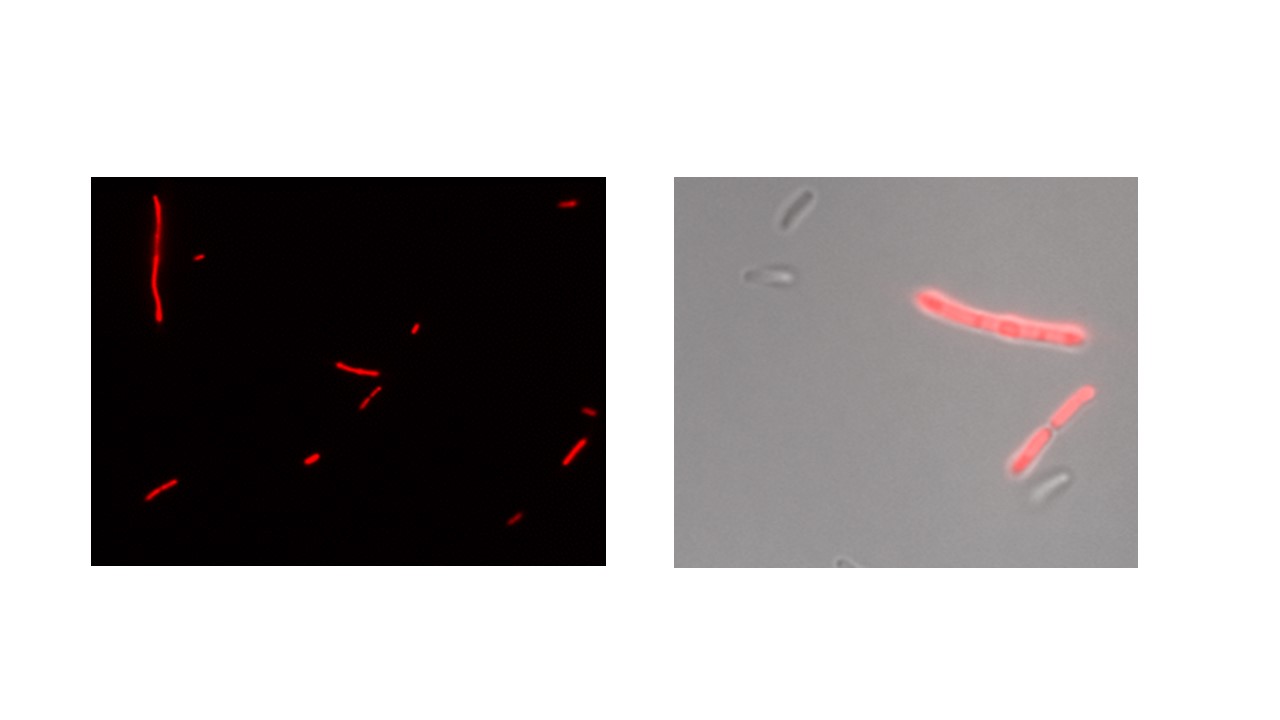 Protein Expression from the vector was confirmed by both color of the transformant and SDS-PAGE, which showed that α-gal-RFP was expressed in E.coli. Additionally, most of the expressed protein was soluble in vitro. 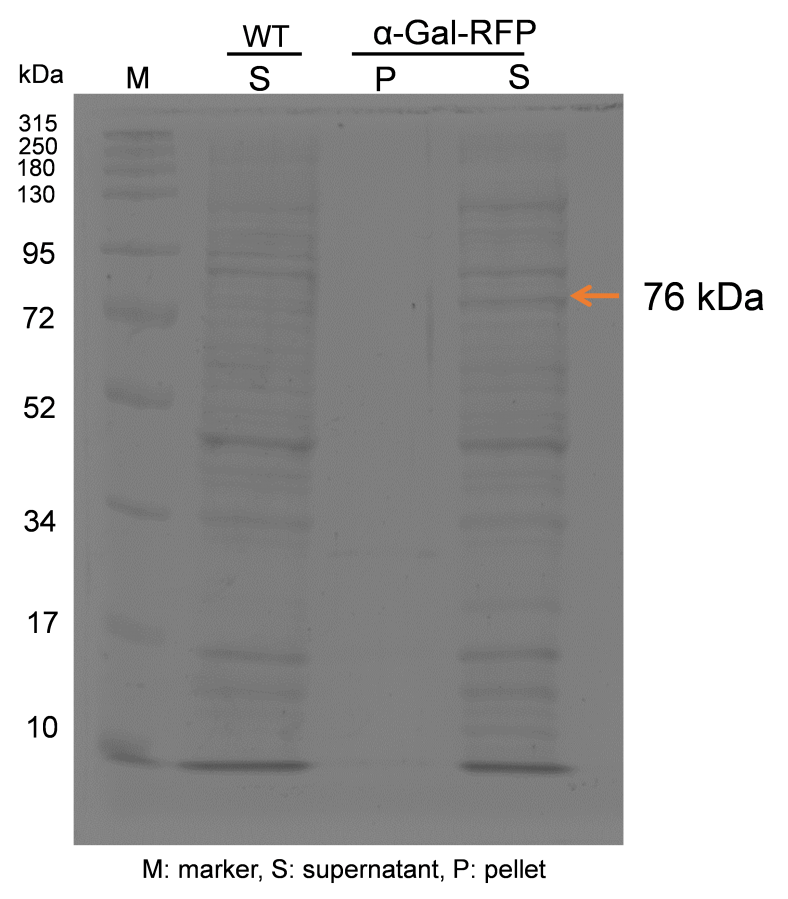 To examine whether α-gal-RFP has an enzymatic activity in vitro, we measured degradation of PNPG that was used as a substrate of α-galactosidase. PNPG (4-Nitrophenyl-β-D-glucopyranoside) is a chromogenic β-D-glucosidase substrate, producing a yellow solution on cleavage.

These results confirmed that a partially purified fraction of α-gal-RFP exhibited an α-gal activity level equal to original α-gal. It is noteworthy that the activity was observed even at 65 °C, although the activity level was about 40% of that at 37°C.

Although we succeeded in expression of α-gal-RFP in the E.coli, it was not clear how much time it took to obtain as large an amount of the expressed protein as possible per a given volume of the culture media. Thus, we did experiments to determine when we should finish incubating and collect the E.coli strain most appropriately.

The experiments and the results are described in "Contribution" in the BRONZE section.

PART-2: Bio-carrier of the enzyme to the target biofilm

If the fractions of the enzyme are poured into bathtubs in hot spring facilities, large amounts of the enzyme will be required for efficient degradation of biofilms. Addtionally, it would cost money to obtain large amounts of the enzyme even if they are partially purified. For these reasons, we got interested in engineering a “bio-carrier” of the enzyme which targets biofilm. What is more important is that bacteriolysis is caused in E.coli when we desire. We applied conditional suicide system of E.coli. This system uses a suicide vector that produces a protein causing cell lysis, which is induced by addition of sucrose. Note, however, that a ready-made plasmid cannot be used because the ori type of pACYC177 is the same as that of pSB1C3 (See Notes for details)

The methods are essentially the same as those in Part-1. The SacB gene from plasmid pABB-CRS2 (lab-stock) was cloned into pACYC177, as below. 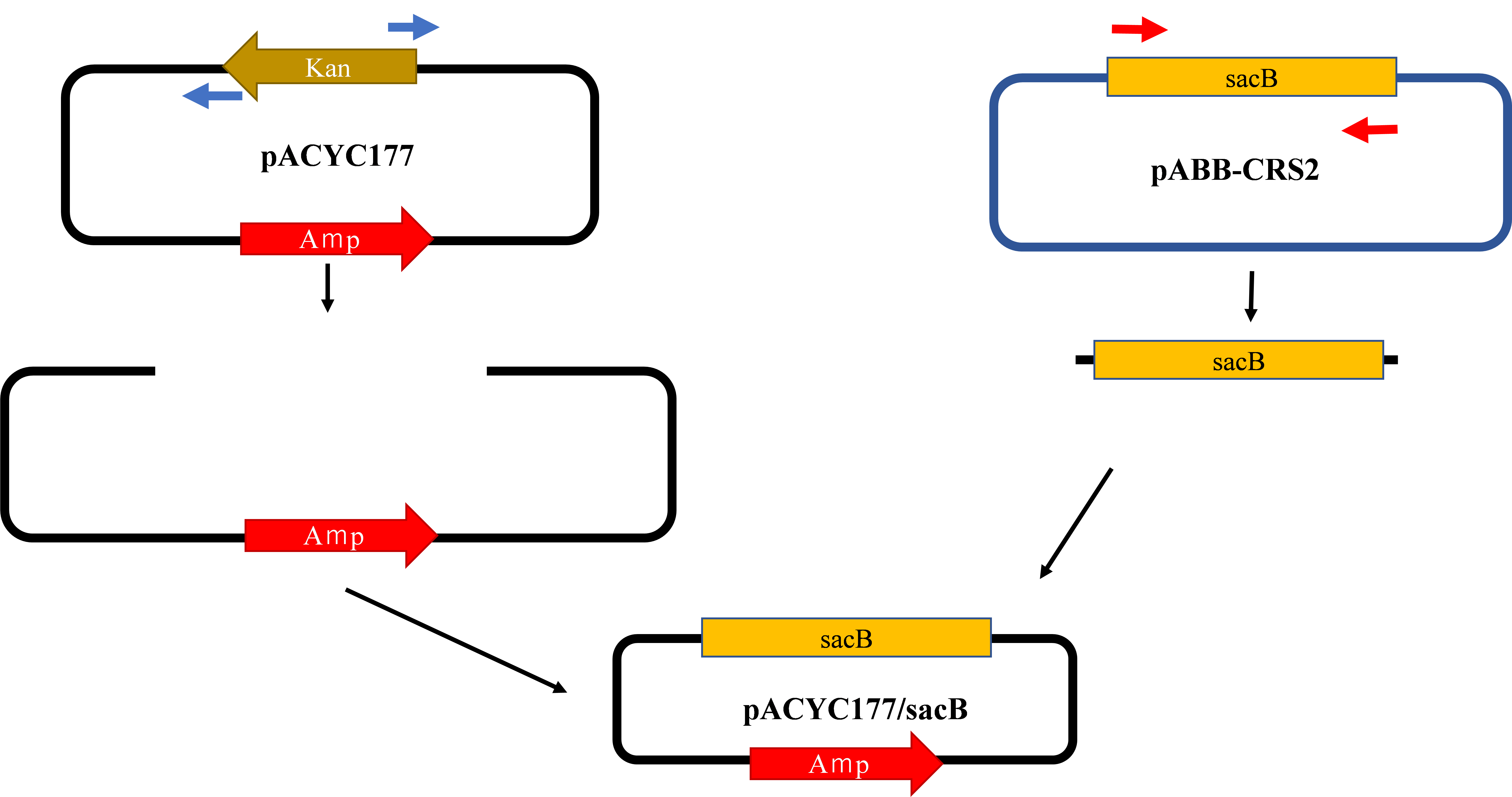 pACYC177/sacB was transformed into the DH5α strain already harboring pSB1C3/α-gal-RFP. The resultant transformant harboring two kinds of plasmids was grown in LB media until OD600 between 0.8-1.0 in a shaking incubator (37 °C). After sucrose at final concentrations of 30% was added into the culture, the transformant was grown for 15 hours.

Needless to say, in terms of cost and working hours, the smaller amount, the better; the shorter time, the better.

We examine amounts of sucrose and shaking time of the culture that are required for efficient lysis.

These results showed that concentrations of 15% and culture time of 3 hours, at least, are required for efficient lysis.

Part-3: Thermal stability of the enzymes

The temperature of the water in bathtubs is about 42 °C. The temperature of waste water is sometimes even more than 42 °C. In some hot spring facilities, the spring source temperature is around 90 °C. It is desirable for the enzyme used to possess thermal stability and catalytic activity at high temperatures. Therefore, we tried to use enzymes from an extremely thermophilus bacterium, Thermus thermophiles HB8. The bacterium was discovered from a hot spring on the Izu-Peninsula in Japan, and is viable even in the high temperature environment of 85 °C.

Two plasmids (pET11a) harboring α-galactosidase or β-glucosidase from T. thermophiles was provided by the RIKEN BRC through the National BioResource Project of the MEXT/AMED, Japan. Each plasmid with a T7 promoter was transformed into BL21(DE3). Unexpectedly, each enzyme was expressed in the E.coli strain; however, both were largely insoluble. Although we changed temperatures as a culture condition, or concentrations of IPTG as an expression inducer, they were not solubilized. 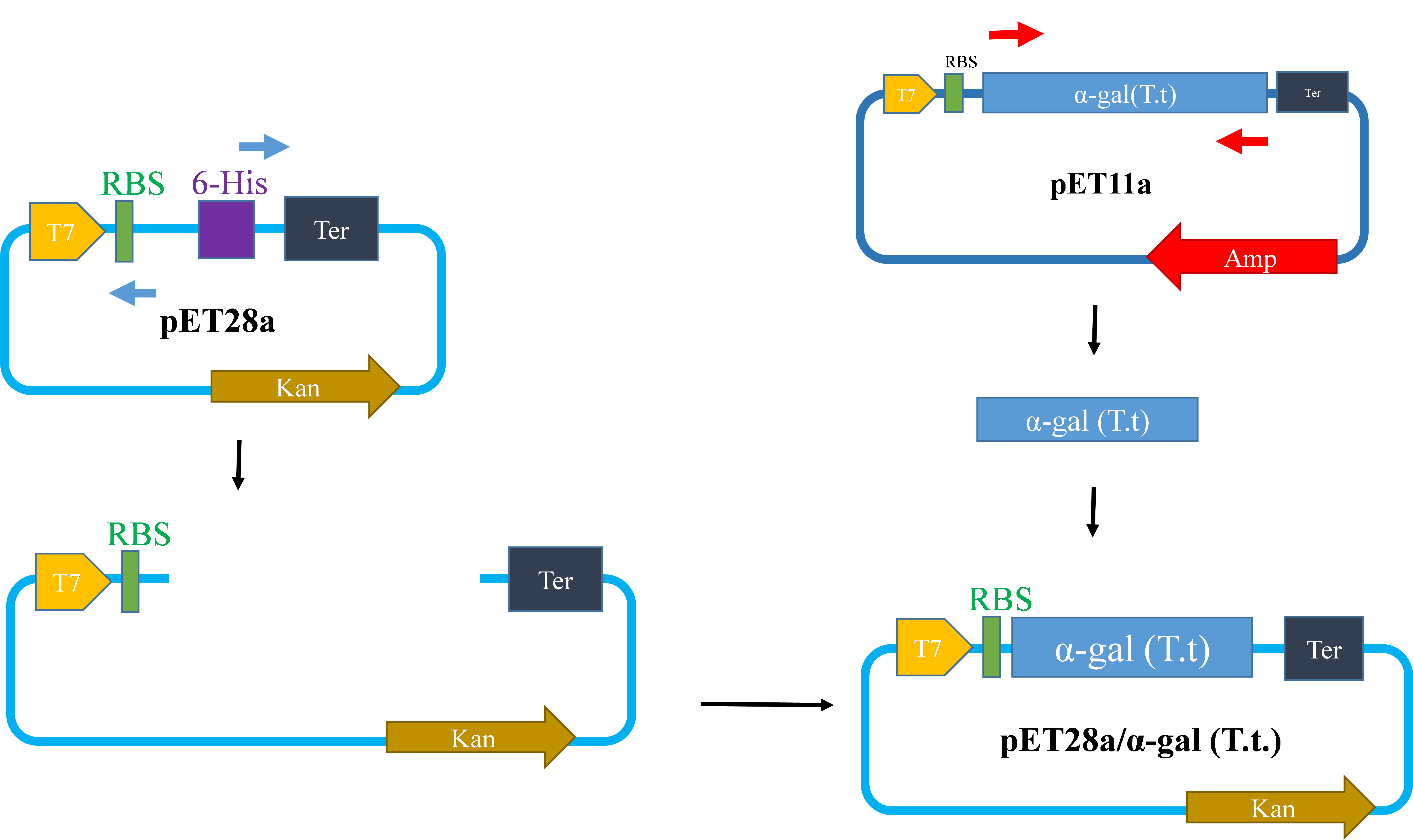 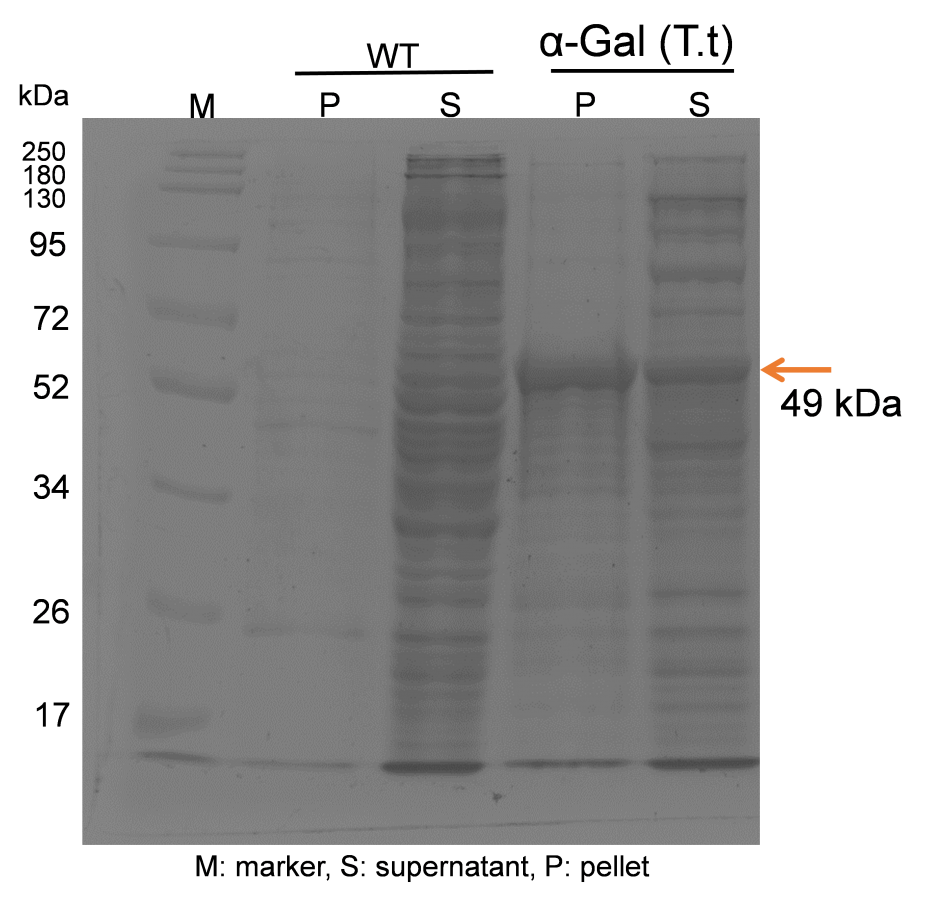 We looked out papers about the two enzymes. As a result, we found that there was a possibility that the α-galactosidase recombinant protein in which a His-tag was added to the N terminus was soluble. The gene from pET11a was cloned into plasmid pET28a and the resultant plasmid was transformed into BL21(DE3). The results showed that the recombinant protein was partially soluble. 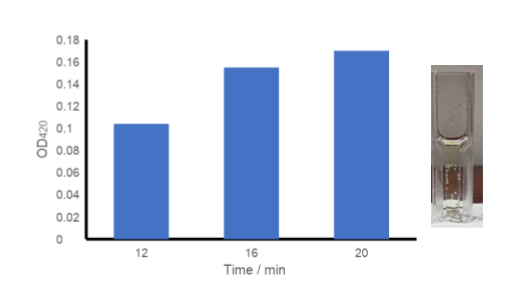