In selecting a gene elimination mechanism, we identified the most important aspects: minimal burden on cell growth and the ability to be delivered and propagated. We strayed away from some systems, such as Cas9, due to the toxicity in cells that lack efficient non-homologous end joining repair mechanisms, and had difficulty in propagating throughout a bacterial population [1]. Instead, we pursued the use of the INTEGRATE system, a CRISPR-guided transposase capable of highly specific, autonomous gene elimination [2].

INTEGRATE is a one-plasmid system that contains all the necessary molecular machinery for targeted DNA insertions into sequence specific loci [2]. INTEGRATE is a CRISPR-guided DNA integration system composed of the CRISPR-associated proteins Cas6, Cas7, and Cas8(also referred to here as Cas5), which come together to form the Cascade complex. The Cascade complex associates with transposase protein TniQ, which guides the catalytic proteins TnsA, TnsB, and TnsC to a specific locus in the DNA where TnsAB then catalyzes double stranded breaks and TnsB catalyzes integration. The transposable DNA element is integrated approximately 49 bases downstream of the target recognition site. In this system, 130 base long transposon ends flank the donor DNA that is the integration payload, thus the payload may be altered by designing different sequences between the flanking ends or by moving the flanking ends on the plasmid. The autonomous INTEGRATE plasmid (pSPAIN) has transposon ends that are placed such that the entire INTEGRATE system is the donor DNA. 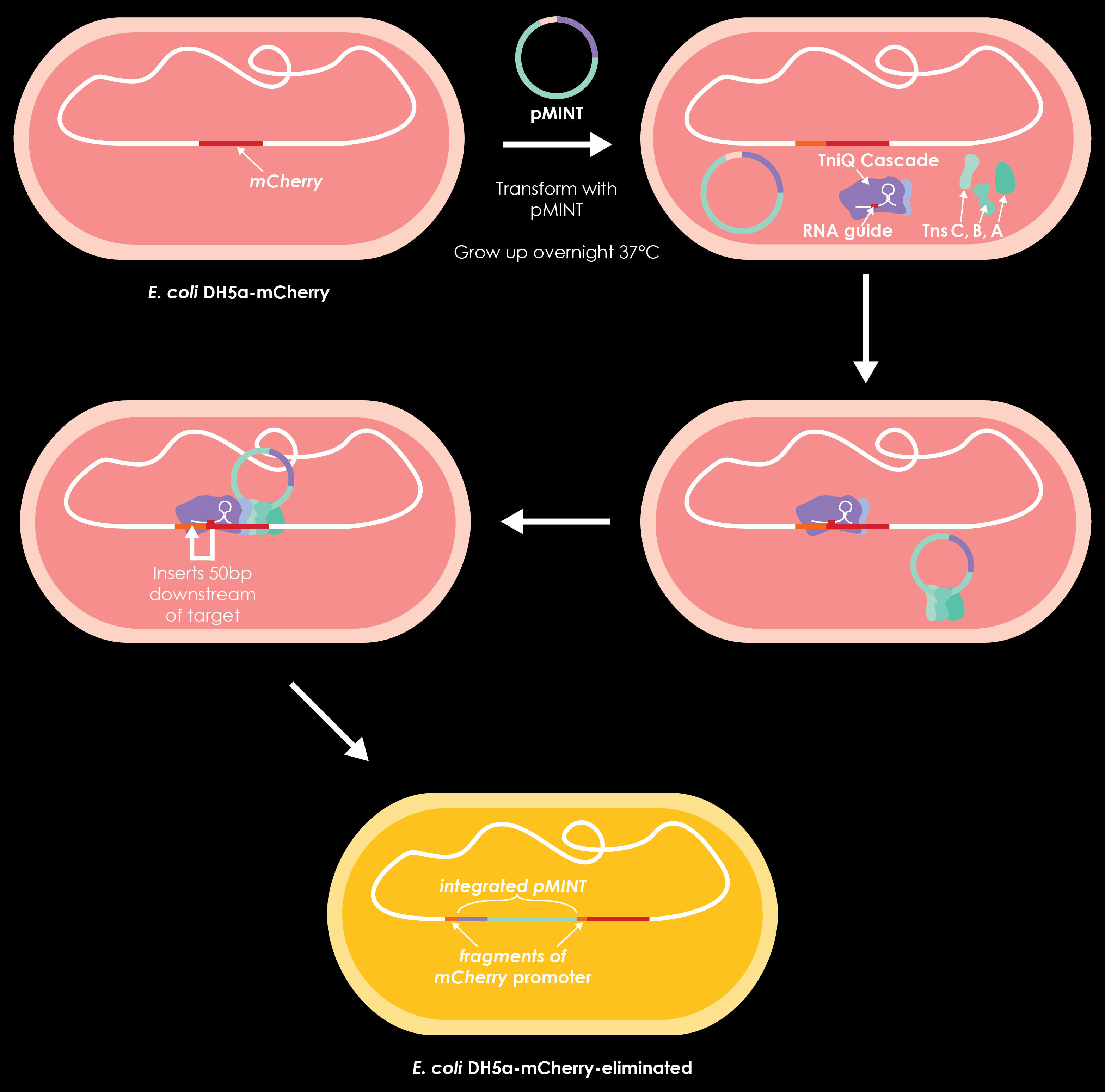 How we utilized INTEGRATE to knock out a gene: First, the plasmid containing the INTEGRATE system is introduced to a host cell. The cell expresses the INTEGRATE cassette, forming the TniQ-Cascade complex with the crRNA guide. The crRNA guide identifies and binds to the host’s target DNA sequence. TniQ recruits Transposases C, B, and A, which carry the donor DNA for integration. Transposases INTEGRATE plasmid 50 bp downstream of crRNA’s binding site. In our system, the integration site is in the middle of the mcherry promoter. Finally, gene transcription is disrupted. In this figure, pMINT refers to a plasmid carrying the INTEGRATE system that targets mcherry (see our Proof of concept page for more information).