IBD (Inflammatory bowel disease) is a chronic disease that impacts a human being’s daily life. The typical symptoms of this disease include persistent diarrhea, abdominal pains or cramps, ulcers in the colon and rectum. According to World Gastroenterology Organisation, the incidence and prevalence of IBD have been increasing with time and in different regions around the world-indicating its emergence as a global disease.

However, because of the various clinical symptoms of IBD, there is no widely recognized diagnosis criterion or treatment method. Previously, it is reported that both S2O32-/ S4O62- and NO3- can be used as biomarkers for IBD biosensors. On the basis of this, we aimed at build a Boolean logic circuit that combines two biosensors of thiosulfate/tetrathionate sulfate and nitrate. The biosensors will be used to help with diagnosing IBD. 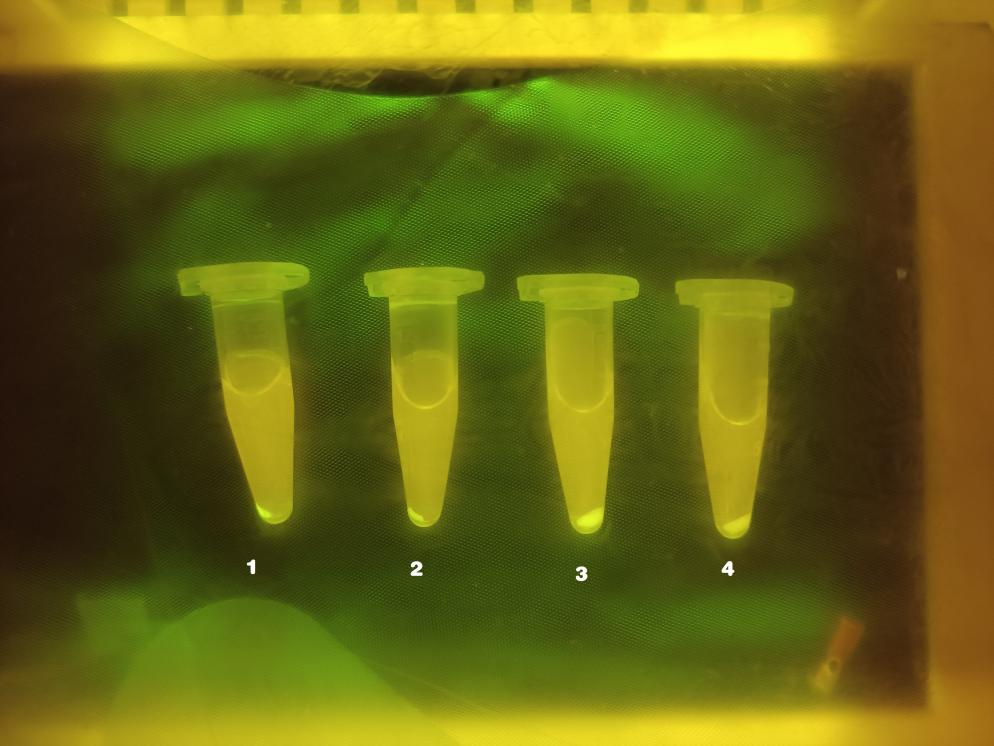 
As shown above, there is obvious fluorescence in sample 1 and sample 2; for sample 3 and sample 4, there also a slight fluorescence produced in the tubes. In order to scientifically quantify the result, we used ELIASA to read the accurate fluorescence intensity, respectively. 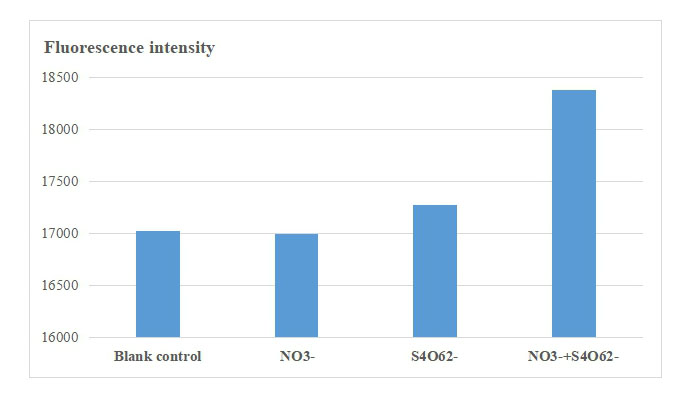 Graph 2. Histogram of the fluorescence intensity of samples in Table 1

According to the histogram above, we can see that Sample 1 (NO3-+ S4O62-) presents obvious higher fluorescence intensity than the rest three samples which means our design working. But we do realize that Sample 2 (S4O62-) also presents fluorescence than the blank control which confused us a lot. According to our design, if we only add S4O62- without NO3-, this AND gate wouldn’t allow to pass into the reporter (Part 3) as there is a closed door of the NO3- sensor (Part 1). Therefore, we thought there was something wrong in Part 1.

In order to figure out the reason, we did several literature research and find out that the potential causes of Part 1’s failure may be that we didn’t build the NarX-NarL two-component regulator (Graph 3), which shall be the first one to sense nitrate and that is why Part 1 didn’t work fine as we expected. 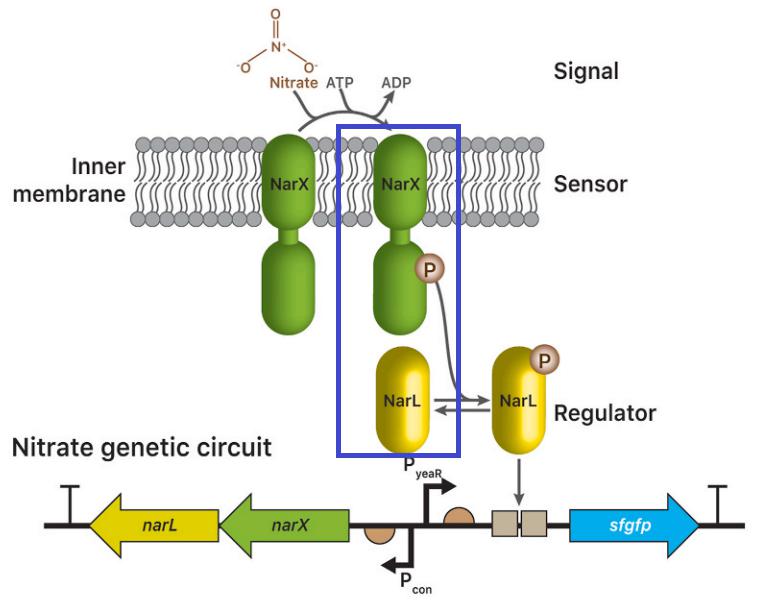 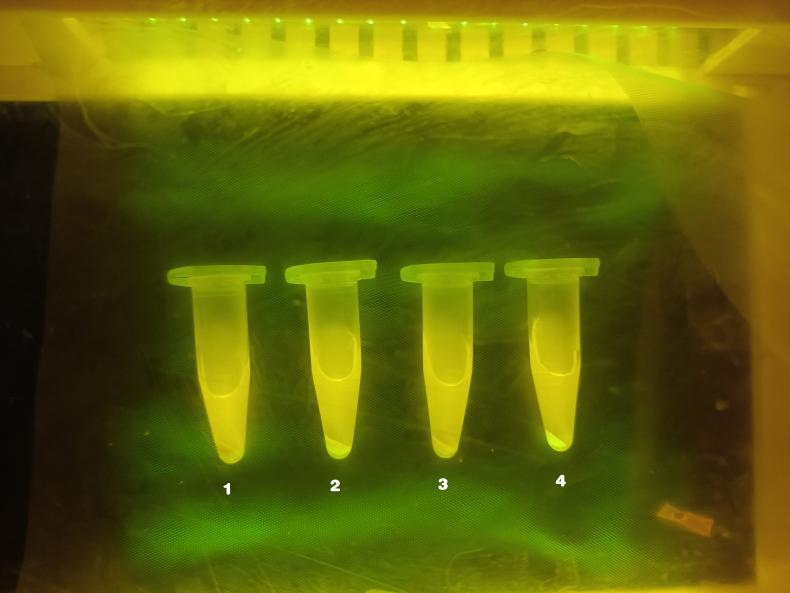 In order to further analyze the performance of Part 2, we also designed the control groups as showing above where Sample 1 and Sample 2 were presented as the comparison of the fluorescence phenomenon. We can see that there was no fluorescence in Sample 3 (the report part, Part 3). According to the result of Sample 3 and Sample 4 (Graph 4), we could infer that the AND gate design works (HrpR_HrpS, PhrpL) as the Part 3 didn’t respond when there is no Part 1 and Part 2.

Of course, we also repeated the experiments and measured the fluorescence intensity by ELIASA. The data is given below.

Graph 5. Histograms of the fluorescence intensity of samples in Table 2 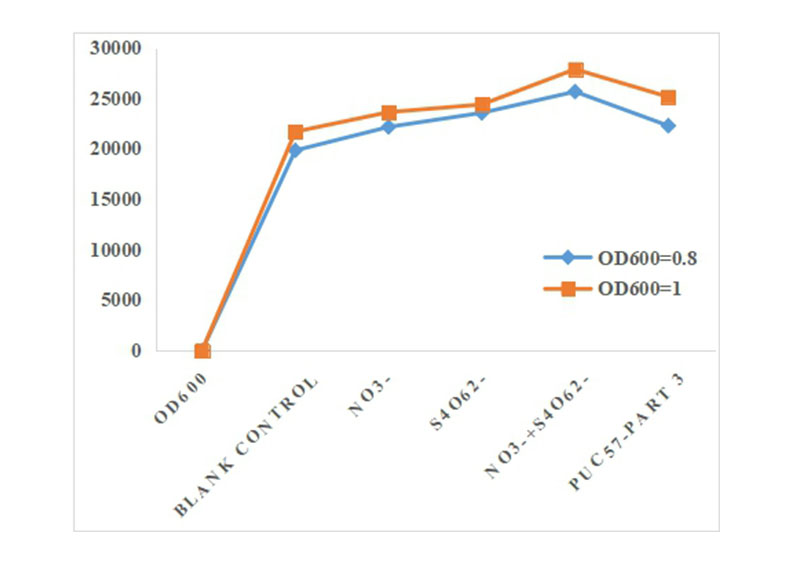 According to the trend in Graph 6, the fluorescence intensity of pUC57-Part 3 presents the similar level as that of blank control and group NO3-, which means the “gate keeper” promoter, PhrpL works well and this conclusion also back up the conclusion that the AND gate design works well (HrpR_HrpS, PhrpL).

As the group S4O62- did present higher fluorescence intensity than that of group NO3- whenever OD600 equals to 0.8 or 1, it indicates that Part 2 and Part 3 both works well as Part 2 did show “green light” to the tetrathionate to finally “light” the Part 3.

In conclusion, through our experiments, we have ensured that Part 2, Part 3 and also the AND gate design work, it means that we have a solid foundation for our final goal-production of effective biosensors to help with diagnose IBD. The only thing we need to do will be the improvement of Part 1 which is used to sense nitrate so that we could fully complete the whole biosensor construction to diagnose IBD.