The prospect of tackling real-life problems of both local and global relevance by leveraging the powers of synthetic biology was the primary motivating factor behind our iGEM project. We were inspired by the project of iGEM Ruia Mumbai 2018, Catechewing coli, an eco-friendly enzyme to remove paan stains from walls. In this regard, we explored many different issues, mainly focusing on environmental issues.

Our team noticed black patches on walls both inside and outside our campus and was motivated to explore the potential reasons behind this. A detailed literature survey revealed that these patches are fungal molds that grow due to high atmospheric humidity. The spores from these colonies accumulate on building surfaces and can be inhaled by people inhabiting these spaces, leading to a plethora of respiratory illnesses. The year 2021 saw astronomical rises in fungal infections like mucormycosis, aspergillosis, and invasive candidiasis caused by Mucorales, Aspergillus, Candida, respectively in India, in conjunction with the COVID-19 pandemic. We also discovered that the fungal pathogens that cause these infections are ‘opportunistic’ in nature, meaning that they primarily affect immunocompromised patients, such as AIDS patients, people receiving organ transplants, COVID-19 patients, etc. Patients with severe COVID-19 or those recovering from such conditions have been reported to develop severe illness accompanied by a high mortality rate due to fungal infections.

We decided to develop Moldemort, a chimeric chitinase enzyme, as a solution to the problem we wanted to address. We hypothesized the enzyme would synergistically combine the activity of their parent molecules and would have higher chitinolytic activity than the wild-type chitinases. Our design takes inspiration from the domain architecture of class 18 and 19 endochitinase enzymes which degrade glycosidic bonds at non-specific internal sites of the chitin polymer, thereby disrupting the structural integrity of fungal cell walls. Our enzyme design combines functional domains from diverse chitinases, essentially combining the most favorable characteristics of each enzyme into a single enzyme. We also propose the possibility of nano-encapsulation mediated drug delivery as a potential mode for therapeutic intervention. We are also working on the potential applicability of this idea in diverse settings like agriculture and hospital settings where fungi are invasive and harmful. 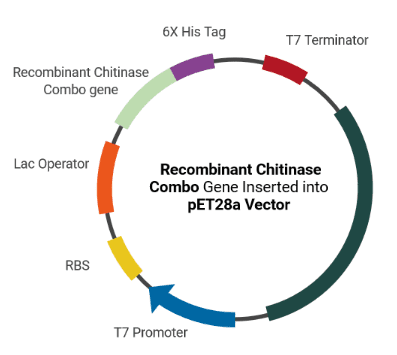 Why did we choose chitinase?

Chitin (a long-chain polymer of N-acetylglucosamine) is an underlying and conserved polysaccharide found in the cell wall of all fungal species. Chitinases are enzymes naturally produced by plants, bacteria, and other multicellular organisms to defend themselves from fungal infestation. Chitinase is used as an antifungal agent in combination with antifungal specifics therapeutic for various fungal infections.[1] Chitinase can also be used as a possible biomarker in the prognosis and verdict of several antifungal illnesses and allergies.[2]


The chitin biosynthesis pathway is rather complex and involves the orchestrated action of several enzymes in a well-regulated fashion. Hence, we hypothesize that it is unlikely for fungi to be able to alter this pathway to generate different chitin structures which our enzymes would be unable to lyse. In essence, since chitin is an essential molecule for fungi and its biosynthesis pathway is complex, we think that the probability of the emergence of drug-resistant fungi is low.


Therefore we develop new recombinant chitinases that combine functional domains from diverse chitinases, essentially integrating the best attributes of each enzyme into one. However, it'll contribute to a new class of antifungals, If successful. The design of unprecedented chitinase supports may act as vital and rational scaffolds in designing novel remedial agents in the treatment of various inflammatory diseases. Over the past decades, only five classes of antifungals have been discovered of which Olorofim is still under study. Amphotericin B (AmB), belonging to the class of polyenes, is shown to be effective against severe systemic fungal infections. The mechanism of action of AmB is based on the binding of the AmB molecule to the ergosterol that is present in the fungal cell membrane. It produces an aggregate that creates a transmembrane channel, allowing the cytoplasmic contents to leak out and leading to cell death[3]. Clinical manifestations of AmB nephrotoxicity include renal insufficiency, hypokalemia, hypomagnesemia, metabolic academia, and polyuria due to nephrogenic diabetes insipidus.[3] Their hefty cost also makes them less accessible to the poorer sections of our society. Olorofim antifungal agents called the orotomides work by targeting the enzyme dihydroorotate dehydrogenase (DHODH) in the de novo pyrimidine biosynthesis pathway. They've been designed to be administered orally and intravenously.[4] [5] Ultimately alarmingly, rampant use of these antifungals over the stretches has led to the emergence of various resistant populations of fungi, which necessitates the development of further robust remedial agents.