Mathematical modeling is an integral part of understanding the feasibility of our project. Here, for MOLDEMORT, we have attempted to model extremely crucial components of our project using mathematical equations to predict how our chimeric protein may work in-vitro. We have provided all the equations that have been in use, along with our understanding of the requirements of the models.


The data thus obtained can be further used to design experiments in the wet lab.

The team has identified seven fungal species through morphology and Sanger sequencing.


To check the activity of our chitinase enzymes, we need to determine the growth rate and lag phase of the species to compare it with the changed parameters when inflicted with the extracted protein.


To analyze the growth of the fungus, two different methods were used:

Nipagin, being a methylparaben, is an antifungal agent primarily used in cosmetics and food preservatives.[5]


IC50 of the antifungal here would indicate how much of the chemical would be needed to inhibit the in vitro growth of the given fungal species by 50%.[6]


Lower the IC50, better the efficiency of the antifungal.


An initial trial in experimenting, with antifungal concentration starting from 1000μg/mL, with serial dilutions of ½ till the final concentration of 0.488μg/mL gave us the IC50 as follows:

The experiment was repeated to verify the results with different mathematical methods. Since the IC50 of Nipagin for both the fungus came in about 200-300μg/mL range, the graduation of nipagin concentration was changed to 800μg/mL to 0.5μg/mL, diluting it by 100μg/mL for the initial concentrations.


The inhibition percentage has been calculated using three different methods:[7] 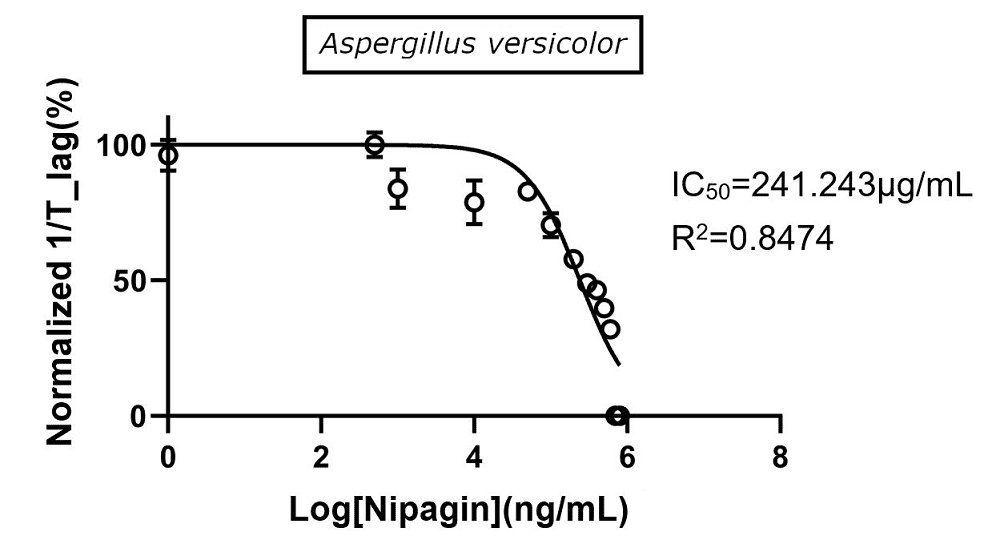 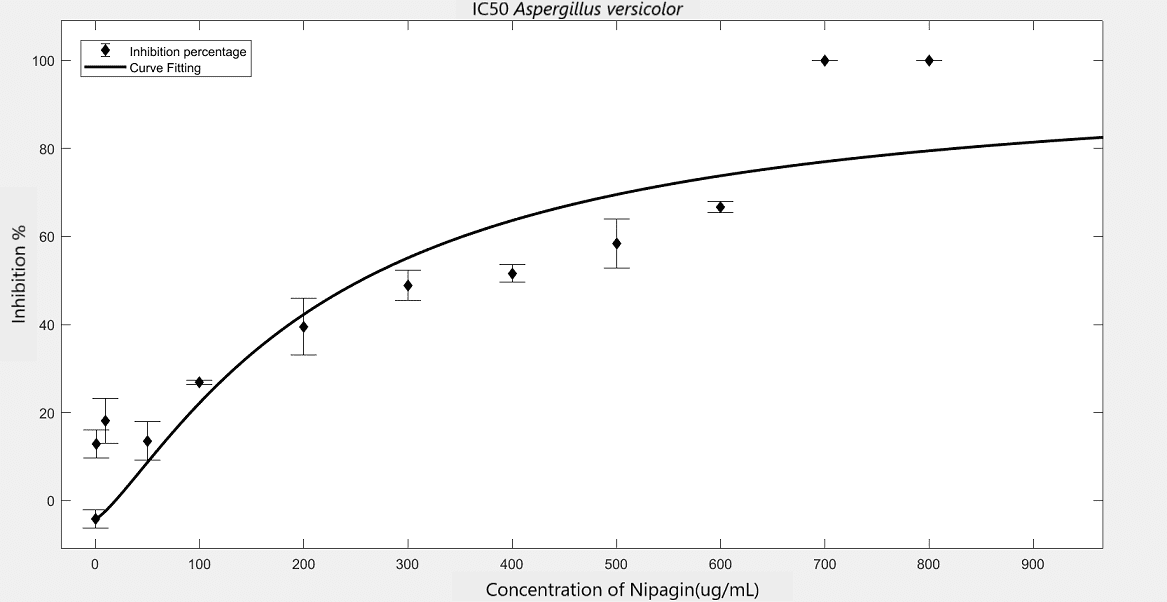 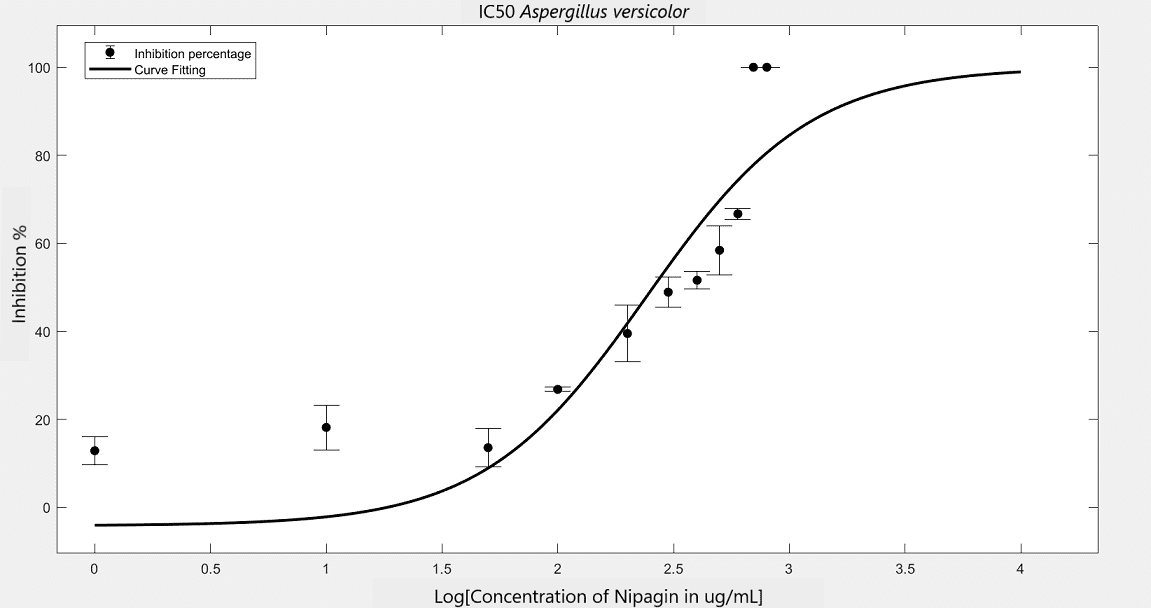 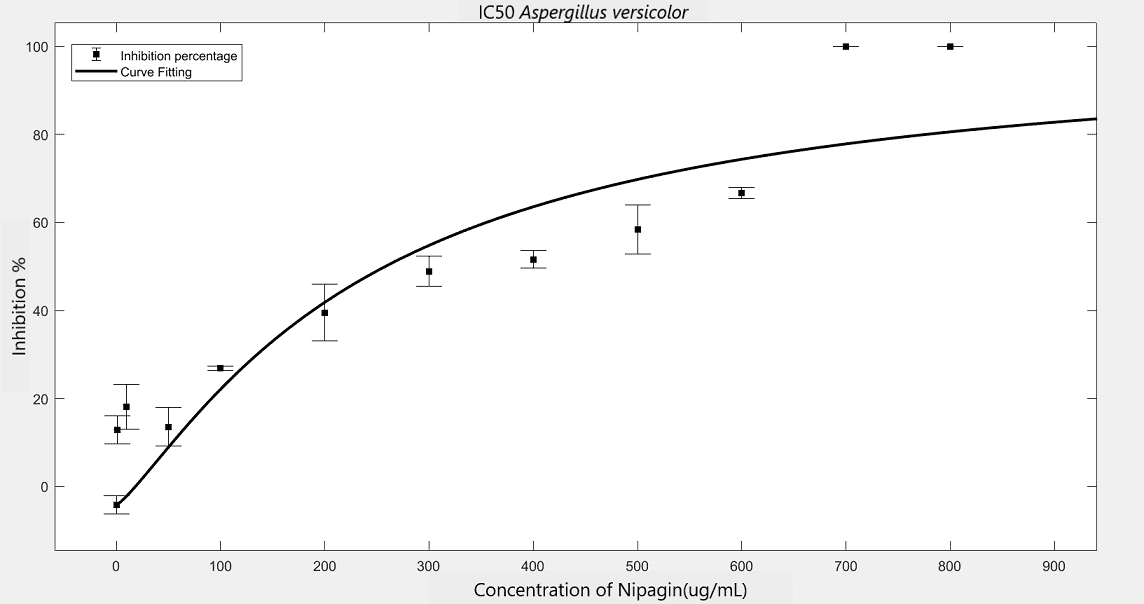 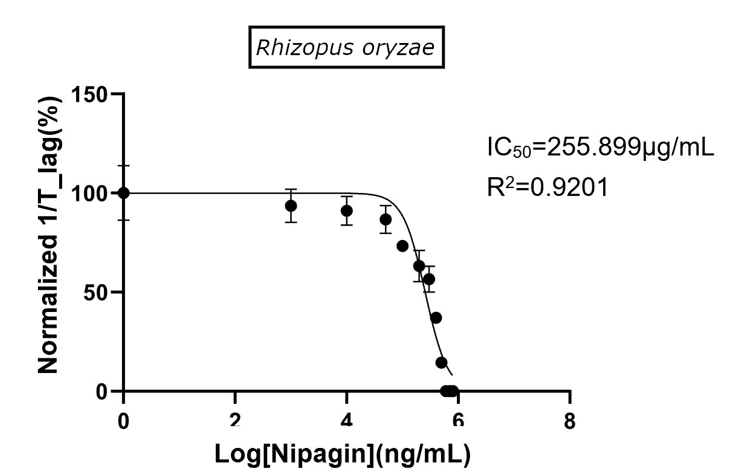 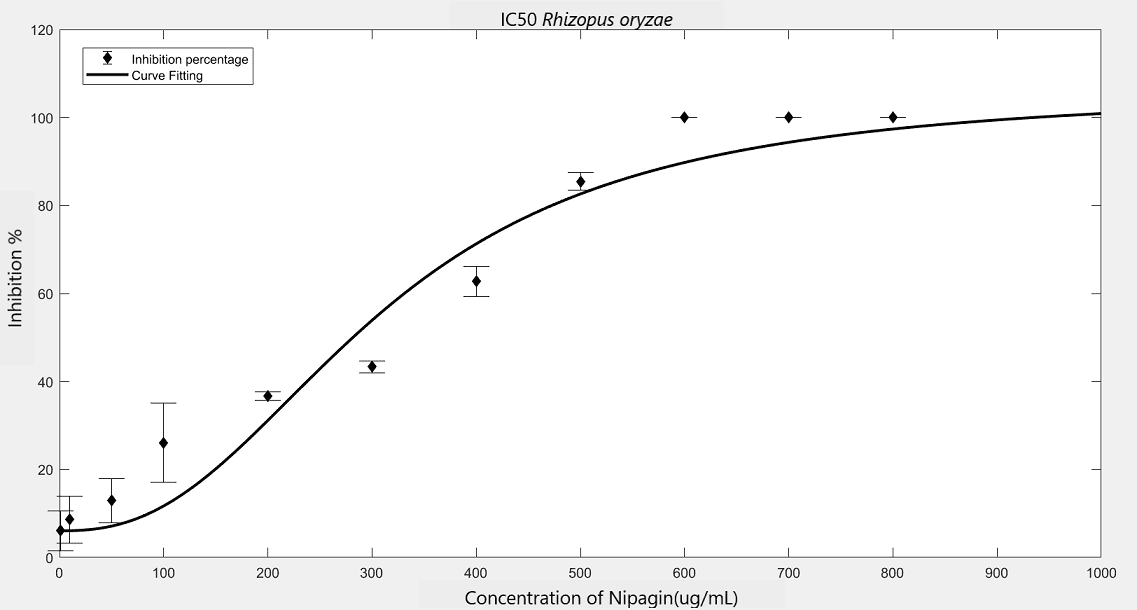 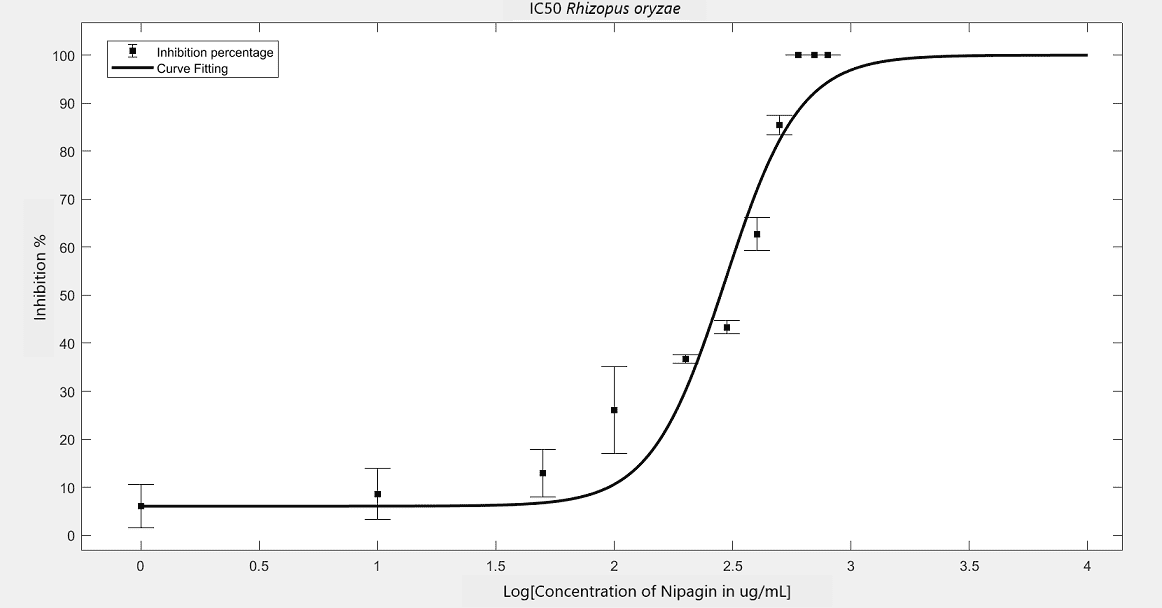 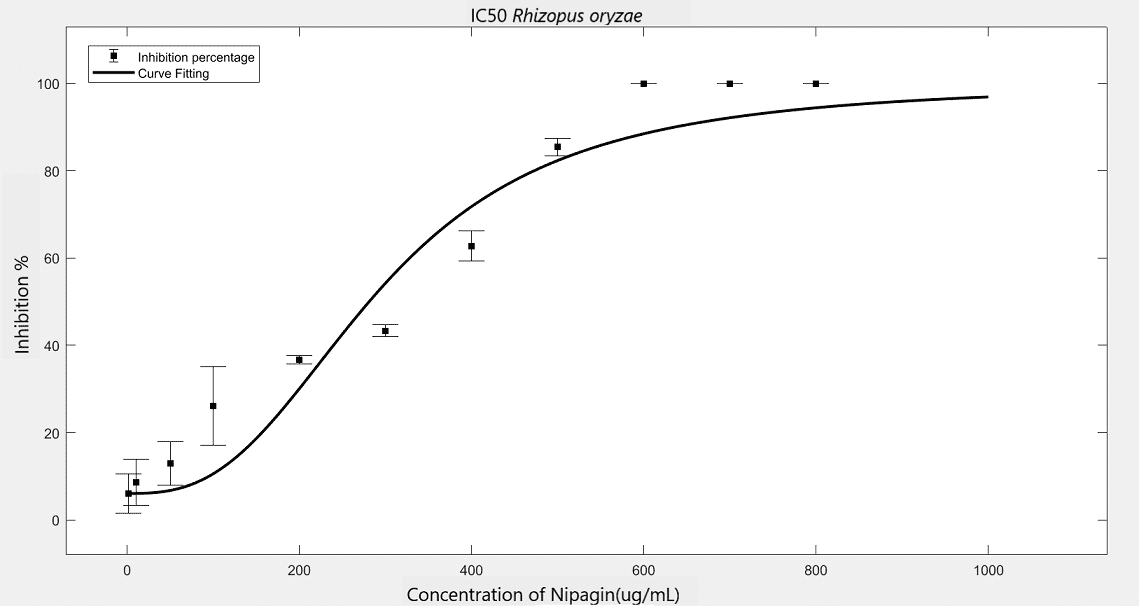 Chitinase-chitin interaction can be considered as a ligand-receptor interaction, where the chitin polymer acts as a ligand that binds to the active sites of the chitinase protein, acting as receptors.


The docking of the chitin octamer to the chimeric chitinases had already been demonstrated through Autodoc results, which provides us with the binding energy.


The binding energy can be used to calculate the dissociation constants,Kd using the equation:

Here, The ligand is the chitin polymer, of which the cell wall of fungi is made of.The receptor is the active site of the chitinase protein.Formation of ligand-receptor complex:

This complex is formed by the virtue of non-covalent bonds like hydrogen bonding, electrostatic bonding, etc.

Considering 1:1 ratio of ligand and receptor entity, we have,

At the steady state,

The affinity of the ligand is usually represented by the dissociation constant,


Note – This equation is for modeling interactions where 1 ligand binds to 1 receptor.

The graph has been plotted using JSim Version 2 software, by putting all the required values.

Fig17: Binding activity of the recombinant chitinases, as shown against the wild-type chitinases.


Note: This model depicts the binding activity of the protein to chitin octamer; itThe backward does not show the antifungal activity of the engineered protein, as only chitin polymer is taken into consideration, rather than the complex cell wall of the fungus.

We tried to estimate the amount of IPTG that would be required for the optimal protein production so as to predict and thereby help with the experimental design.


We tried to estimate the amount of IPTG that would be required for the optimal protein production so as to predict and thereby help with the experimental design.


We also predicted the max amount of protein that a single E. coli cell would be able to produce and further went on to verify our predictions with experimental results.


To get IPTG vs Protein output and Time vs Max Protein output curve, we tried modeling every metabolic process that takes place inside the cell after IPTG induction that is responsible for the production of our enzyme.


The schematic diagram of metabolic processes is attached below: 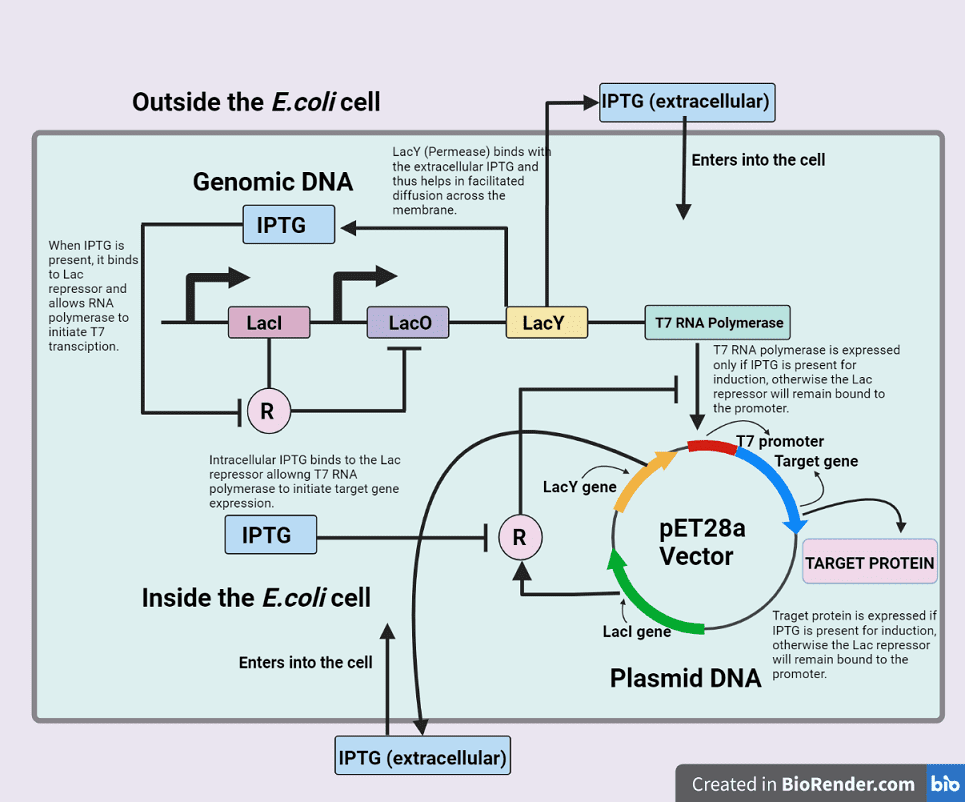 
The gene of our interest is expressed in the BL21 DE(3) strain of E. coli bacteria, whose expression will be under the inducible promoter. The inducer here is IPTG (Isopropyl β-d-1-thiogalactopyranoside). The T7 RNA polymerase which binds to the promoter of our gene of interest and helps in transcription is further under the control of the Lac operon. The IPTG thus have to bind with both:


The metabolic processes for Enzyme production are described in terms of the following Ordinary differential equations (ODEs) :[9]


For the genomic part of the E. coli ,

Note: The elements for the plasmid part are represented with the same Symbols but have an additional “P” added to them to signify plasmid. 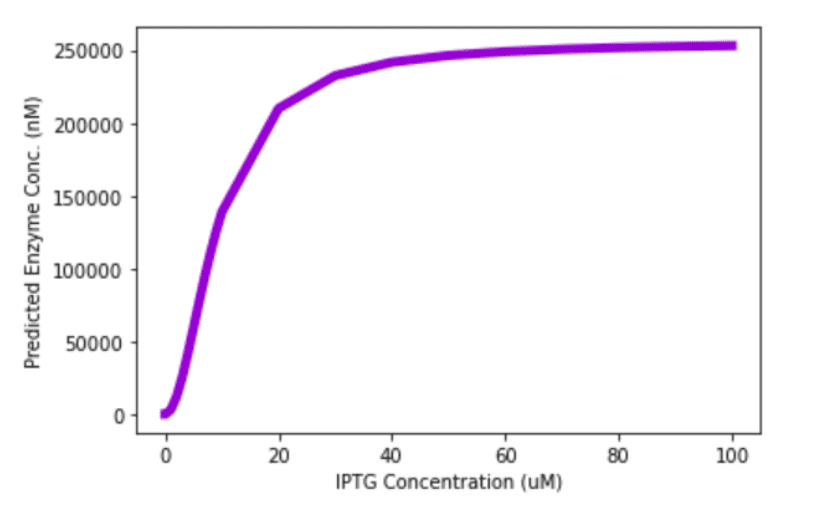 
Through our model, we were able to predict that at the concentration of 0.1 - 1 mM IPTG, we can obtain optimal protein production. This prediction helped us in the design of experiments concerning the expression of the protein. It must be noted that these predictions are well in line with the standard procedures that are being used for IPTG induction.

Our other area of interest was predicting the total amount of enzyme that could be produced by a single E Coli:


Through experimental data, we got to know that 2 litres of culture produce about 20 mg of protein. Assuming there are 10^10 bacteria / L [10] of culture (general assumption) we were able to calculate the amount of protein produced by a single E. coli to be ~ 256000 nM. These experimental results are very close to our prediction which is 255853.577 nM/ cell. 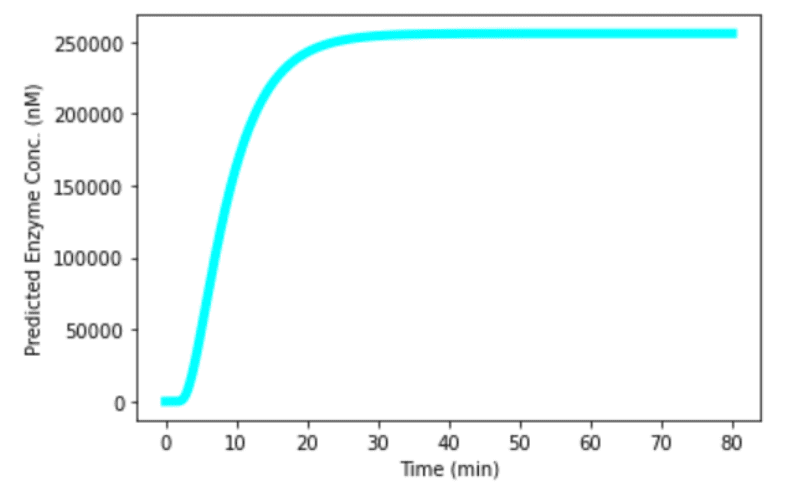 Since our chimeric Chitinase comprises domains from two different chitinases, with both of them having a binding domain, we could, in theory, predict the activity of our chitinase by analyzing the binding of the substrate with individual domains and further coupling the activity to get a combined activity.[11] 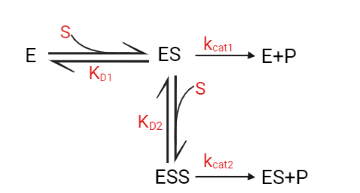 Fig21: Binding of Substrate to Enzyme

The total velocity of this system is given by:


The Vmax for chitinase was found to be 2.3739 mmol/min, which gives us an idea of how adding domains from high activity enzymes could in theory improve the efficiency of low activity enzymes. 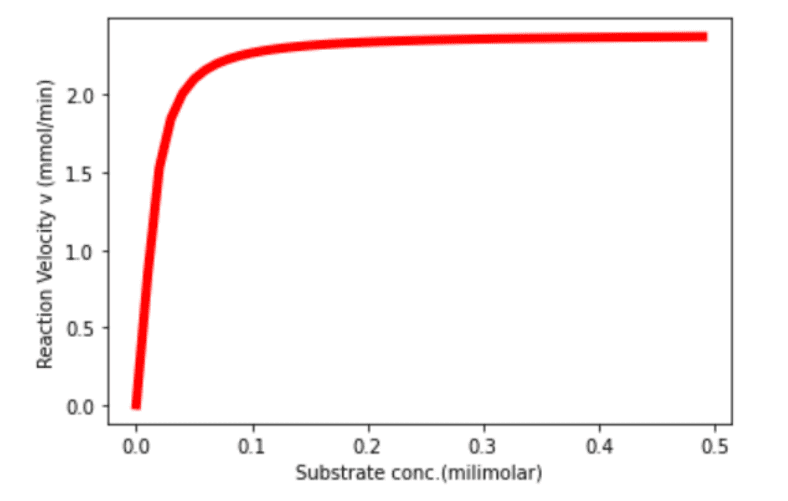 
Further plotting Lineweaver Burk Plot provides us with Km and Vmax for the enzyme.

For the delivery of our chimeric chitinase into the human system, we are looking forward to proposing/ using nanoparticles (specifically PLGA) that are suitable due to their ability for controlled drug release, improved therapeutic efficiency, and reduction in the dose of drug administered.


Upon doing assays using our engineered chimeric protein, we have found that our protein is stable at room temperature and shows promising activity.Thus, it further strengthens our proposal to use PLGA as a delivery molecule to the human body.


PLGA - Poly(lactic-co-glycolic acid) is a synthetic copolymer made up of Lactic Acid (LA) and glycolic Acid(GA) and is extensively used for controlled drug delivery(approved by FDA). In an aqueous environment, the chain undergoes a hydrolytic attack on its ester bonds and degrades into LA and GA which are endogenous compounds normally metabolized through the Krebs cycle. By changing the LA/GA ratio and molecular weight in the polymer we could easily control the degradation time of the molecule. The degradation of the PLGA microsphere typically starts at the center of the sphere and the degradation front moves outwards.


Here we are trying to model and predict the degradation kinetics of PLGA (LA/GA ratio 50:50 and Mw 41.9 KDa in human body which helps us understanding the controlled drug release in human body)


Equation (2) can be considered as a Michaelis-Menten equation. Approximating the quasi steady state, we have,


The rate of soluble product generation,

Where,kdeg= Degradation constant of the polymer

Thus, equation (15) can be modified by including a heaviside function, as follows,

To account for the continuous (non-discrete) transition of µS in time, Heaviside function has been mollified as shown in the following Equation

given the initial condition of

Assuming density of PLGA is constant during degradation, equation (14) can be written as, 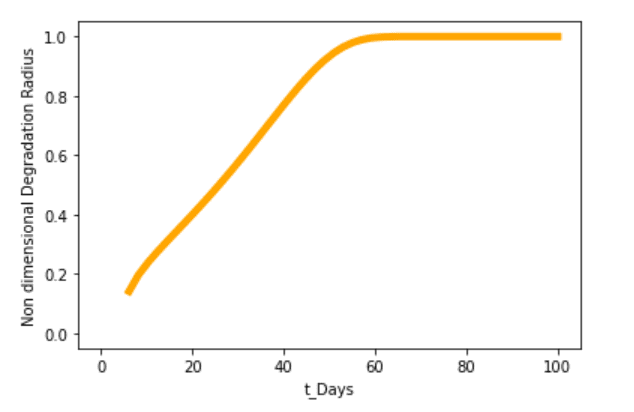 Fig24: Kinetics of the degradation front of PLGA MS


This model predicts that our PLGA microsphere(Mw = 41.9 KDa) will undergo full disintegration in about 60 days (2 months) in physiological conditions. The rate of protein release will be in proportion with the decay rate of the microsphere and hence the dynamics of protein released could be analyzed using this model.