Introduction to pTEF1 - Why are we interested in this part?

PTEF1 is a gene promoter that generates the protein Translational Elongation Factor (TEF). This protein is involved in cell growth and is one of the most abundant in eukaryotic cells, which explains its wide use in yeast research. In addition to that, it is very efficient for expressing foreign genes and it can be used as a constitutive promoter in the mass production of heterologous proteins (foreign proteins derived from another organism).

According to our research, we also discovered that the PTEF1 showed a pattern of overexpression of TEF1 in mice when exposed to CdCl2 (identified as mouse proto-oncogene), contributing to tumor formation. This trait could be used to our advantage by allowing us to overexpress proteins involved in Cadmium uptake  synthesis when in the presence of Cd in cacao liquor/powder. However, we would have to test if this trait would also work with S. cerevisiae as the host for our project.

Reflecting on the relatively constant activity patterns of PTEF1 in different mediums at different levels, we would also have to decide on which stage of chocolate production to test out our project.

We also decided that PTEF1 is suitable for our project because when compared to other  S. cerevisiae promoters, it showed the most stable and highest level of gene expression in both glucose abundant and carbon-limited environments.  Since our project involves the possibility of bioremediation of either cacao liquor and/or cacao powder which have different amounts of glucose concentrations.

In the paper Oncogenic Potential of Mouse Translation Elongation Factor-1, a Novel Cadmium-responsive Proto-oncogene they first identified the pattern of overexpression of TEF1 in cells when they are exposed to cadmium abundant conditions. This could stimulate cell division and cause protein burden on the yeast cells.

In the exponential growth phase of S.Cerevisiae (i.e. when it consumes glucose), PTEF1 was shown to have one of the highest level of activity among the 7 glucose-based promoters as shown below:

When the yeast turned to consume ethanol as its source of Carbon when glucose ran out, PTEF1 was again shown to have one of the highest level of activity among the seven glucose-based promoters as well, as shown below:

Therefore, in the collected data from the experiment, the paper concluded that PTEF1 was shown to be least affected in its activity patterns during the changes in concentrations of the Carbon source in general (i.e. galactose or ethanol), which proves the constitutive trait of PTEF1.

Moreover, the paper also discusses that PTEF1 carries out a higher level of gene expression in “continuous fermentations” than via modes that contain galactose. However, while PTEF1 is readily engaged with yeast growth and overexpression, it isn’t as readily engaged in terms of transcription. One source mentioned that when TEF-1 was expressed in yeast, it could not activate transcription while another source mentioned that the transcriptional activity of TEF1 gene decreases during yeast (Arxula adeninivorans) growth.

Due to the challenges and changes that the pandemic brought to our lives, returning to the laboratories and accessing some materials was still not possible this year. Despite this difficulty, our team was resilient and continued to research and plan to be ready to make and test our previously designed Cadmium sensor, this time applying it to determine Cd-levels in chocolate liquor, cocoa powder, and soil (liquified) from cacao plantations.

Our project centers on using a cell-free system to detect the concentration of cadmium in cacao liquor and powder, before being shipped out for further chocolate production. We plan to freeze-dry the Sigma 70 Master Mix, from our sponsor Arbor Biosciences, onto paper strips to eventually create a dip-stick-like detection system. When this dip-stick is placed in a blended cacao liquor and powder sample, it will express a shade of red which we can measure comparatively to gauge the concentration of cadmium.

For this project, last year we designed the BBa_K3466000 plasmid to detect the presence of cadmium in fishmeal. This engineering is being planned to be applied in cacao liquor and powder. In the plasmid, the MerR protein represses the PcadA promoter. When cadmium is present, the MerR protein is released and RFP is expressed. Additionally, we created 6 alternative versions of the part to test if different characteristics changed the efficiency of the plasmid. 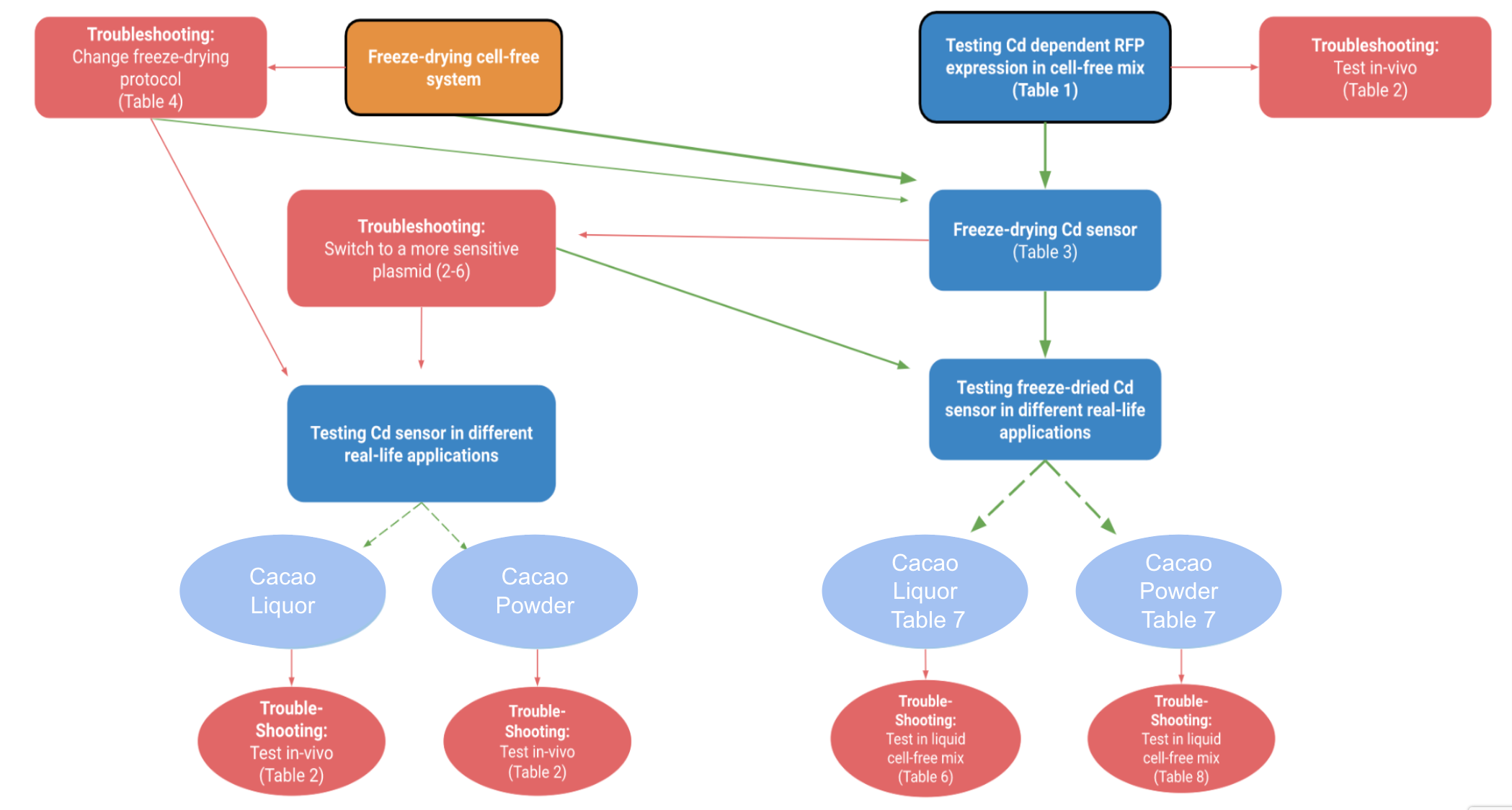 Having discussed our project in detail with our industry stakeholders, Alianza Cacao, we learned that their main interest is in cadmium removal from their final product, not just Cd detection, so we have also been planning to design and test a transgenic yeast strain that will bioaccumulate Cadmium from contaminated cacao liquor/powder as soon as we return to the lab.

In our project, we will focus on using baker's yeast (S. cerevisiae) to perform bioremediation on cadmium contaminated cacao liquor/powder. We plan to achieve this by modifying genes (CCC1, TaPCS1, BSD2, and SMF1) that produce proteins involved in membrane transport and assimilation of metals (see details in table below).

A flowchart of the experiments we plan to work on once we return to the lab in order to create the yeast that we plan to use for the bioremediation and test it's capabilities for final use. 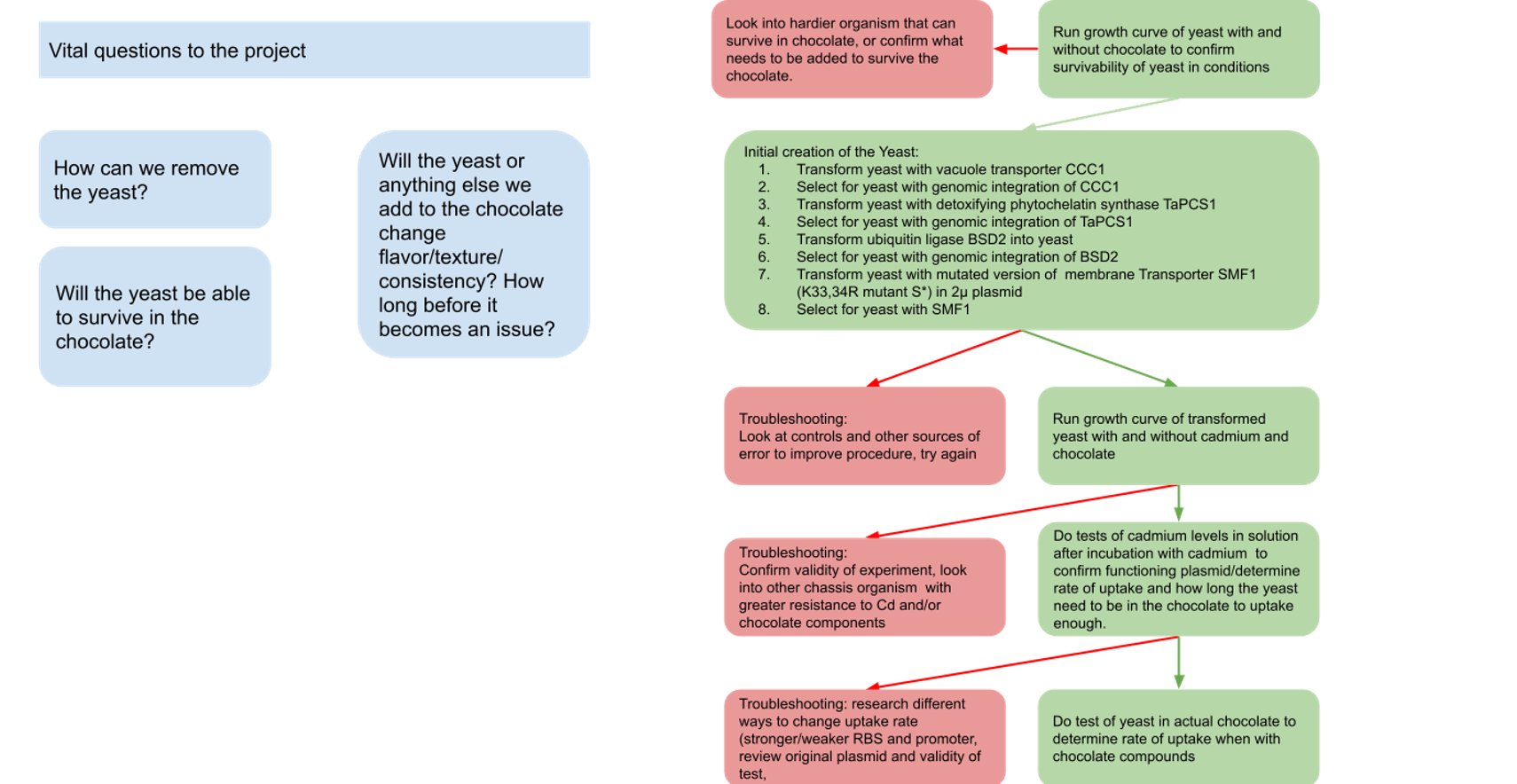 The modified yeast will then be applied to the cocoa liquor and will be able to hyperaccumulate cadmium as a form of bioremediation. One of the tests that we have to carry out is regarding the technique for separating the cadmium contaminated yeast from the cacao liquor/cacao powder. That way we will ensure that the product is safe for consumers and does not alter its flavor or consistency.

During our planning, we have found multiple options:

Centrifugation: A process of separation that uses the application of centrifugal force to isolate particles from solutions, based on their density, size, or shape.  One potential problem with this method when using cocoa liquor is that its density (approx. 1100 kg / m3) could be an impediment to separating it from cadmium-contaminated yeast. That is why we will also try our modified yeast in cocoa powder diluted in water. That way it would be easier to separate, but an extra step would be added for the dehydration of the cocoa powder and water mixture.

Another method we have researched for the removal of yeast is induced magnetization of the yeast cells. This method would be ideal for our project because it gives us the possibility to simplify and accelerate the process of separating the contaminated cadmium yeast from the cocoa liquor, thus making it more accessible and convenient for companies that manufacture cocoa-based products. We plan on achieving this through the cultivation of yeast in liquid ferrin citrate supplemented media. However, we still have to test different cultivation times and amounts of liquid ferrin citrate to achieve the best results possible. If after experimentation the desired level of magnetism is not obtained, the option of using a ferritin expressor could be considered (Nishida K, Silver PA). When the yeast is exposed to these conditions, the yeast protein Tco89p (involved with growth related to environmental availability) will cause oxidation and create iron particles inside the cell, so that the yeast can be attracted by a magnet and separated from the cocoa liquor/cocoa powder.

The future plans for the project would be to scale up the process of separating yeast with cadmium from cocoa powder/cocoa liquor. The solution would be directed towards the companies that collect the cacao beans from the producers to make the different products because it has to be applied during the process of refinement. And although the methods could be replicated in a laboratory on a small scale, cocoa production has to be more accelerated. For that reason, as a team we would have to connect with the machinery they have available or even modify some to better suit the needs of our audience.